Collisions attributed to poor on-board standards have damaged the US Navy’s credibility. 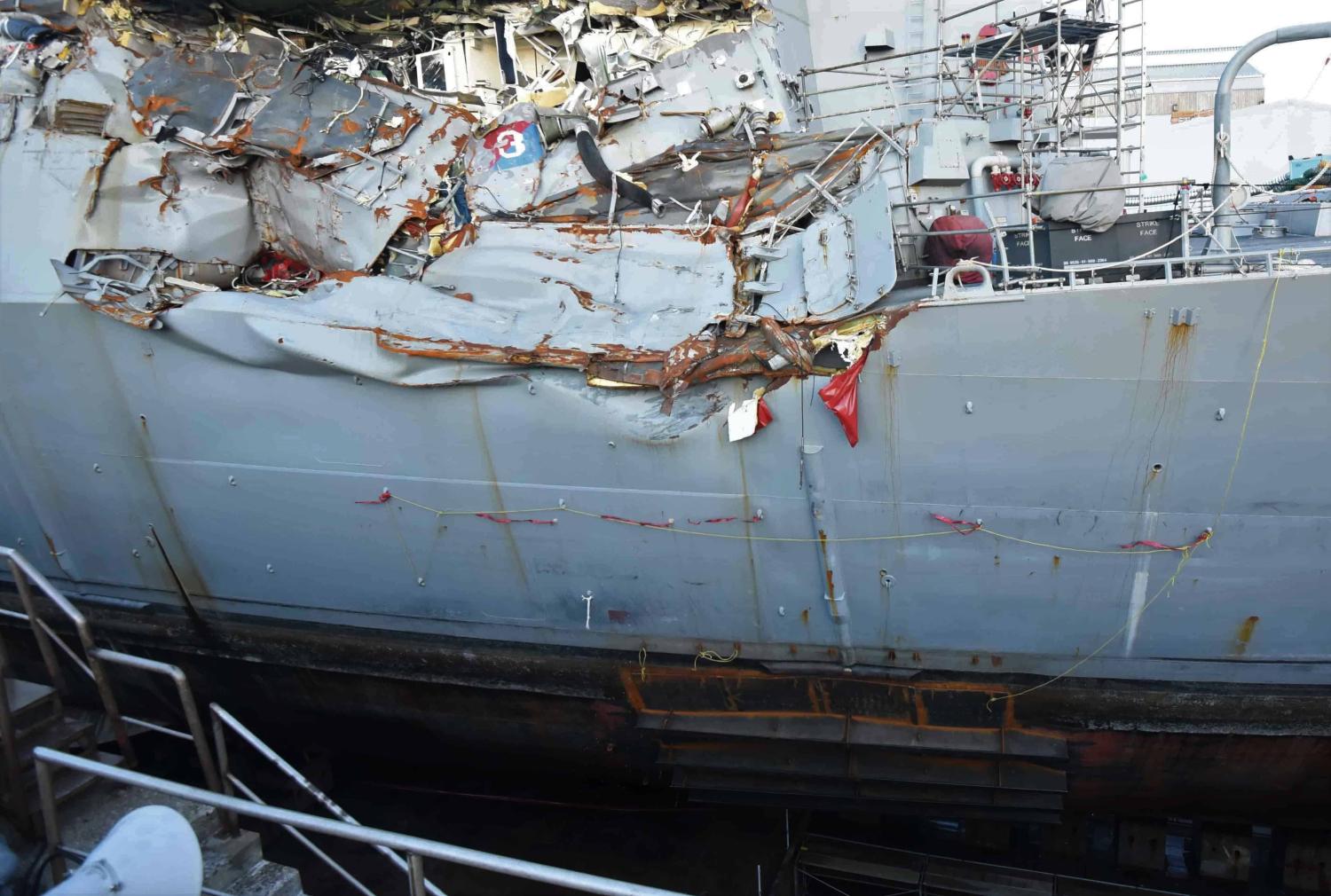 The US Navy is usually acknowledged as the biggest and best navy in the world. It is by far the biggest, and the best in terms of the hardware of naval warfare, although that position is now being challenged by China in some dimensions, such as missile technology and a ship-mounted electromagnetic railgun.

The status of the US Navy as the world’s best in terms of operational efficiency was also questioned last year in light of a series of serious aircraft and warship accidents in its Seventh Fleet. The most tragic of these were the collisions involving the destroyers USS Fitzgerald and McCain that resulted in the deaths of 17 American sailors.

Following these collisions, separate articles by James Goldrick (“Collison at sea”) and myself (“Why do US warships keep having accidents?”) on The Interpreter asked why American warships keep having accidents. Now, the recent trial of the officer of the deck (OOD) on board Fitzgerald when the ship collided with the merchant vessel ACX Crystal off Japan in June 2017 has shown the standards of navigation and seamanship on board Fitzgerald to be even worse than we thought at the time.

The OOD admitted she had violated the commanding officer’s standing orders several times during the overnight transit off the coast of Japan. She also admitted to violating Coast Guard navigation rules; that she did not communicate effectively with the Combat Information Centre (CIC) or operate safely in a high-density traffic condition; and did not alert the crew ahead of the impending collision.

Prosecutors argued that complacency was the standard on Fitzgerald. In mitigation, defence lawyers pointed to equipment deficiencies, crew shortages, and a lack of training on board the ship.

A similar picture of confusion, equipment deficiencies, and lack of experience emerged in the fatal collision involving the destroyer McCain when approaching the Singapore Strait in August 2017. The subsequent investigation by Singaporean authorities found that people on the bridge of McCain did not understand the ship’s steering system, and that many of the decisions leading to the accident were the result of poor judgement by the commanding officer.

Several common factors showed up in the investigations into the McCain and Fitzgerald collisions. These included a lack of understanding and adherence to the Convention on the International Regulations for Preventing Collisions at Sea (COLREGs), not least the need to proceed at a safe speed. Inadequate standards of seamanship and navigation further compounded the situation, along with poor interactions between the commanding officer and key personnel on the bridge, and a lack of knowledge of vital bridge systems.

McCain and Fitzgerald were units of the US Seventh Fleet, the largest of the American fleets, with a huge geographical area of responsibility stretching from the Indian subcontinent to the mid-Pacific. The Seventh Fleet comprises roughly 60 to 70 ships, 300 aircraft, and 40,000 Navy and Marine Corps personnel. Its principal responsibilities are to provide joint command in military operations and operational command of all naval forces in the Indo-Pacific region, in particular in the defence of the Korean Peninsula or in providing a response to assertive actions by China.

The Seventh Fleet’s surface warships are the most visible elements of American military power in the Indo-Pacific region. They would provide the core American contribution to any operation or exercise within the framework of the Quad dialogue.

The then commander of the Seventh Fleet was removed from his position days after the McCain collision. In a reproach to his superiors at the time, he claims to have warned his own commander of the impact of increased operational demands on training and maintenance well before the destroyers’ collisions. In particular, he singled out the tasks given by Pacific Command under Admiral Harry Harris as unreasonable.

Coincidentally, in the book Crashback: The Power Clash Between the US and China in the Pacific, published in 2017, author Michael Fabey suggested that the troubles of the Seventh Fleet were not new. “Crashback” is an American naval term for ordering a ship’s engines to go full astern to avoid a collision or other accident.

The title of the book relates to an incident in the South China Sea in December 2013 when the guided-missile cruiser USS Cowpens was monitoring operations of the Chinese aircraft carrier Liaoning. Cowpens was forced to “crashback” when one of the vessels escorting the carrier cut closely across the bow.

Fabey paints this incident as symbolic of American weakness and a failure of Washington’s preparedness to confront China. However, he also describes the Cowpens as “a troubled ship, with a struggling crew” that lacked training and experience.

The comprehensive review of the McCain and Fitzgerald incidents noted that as additional burdens were placed on the Seventh Fleet, a culture developed on its busiest ships of accepting increasing risk and cutting corners. A leading cause of the accidents was claimed to be overworked ships and overworked crews.

Some deeper issues might also be addressed. This includes the unrestricted line officer concept, as discussed by James Goldrick in his earlier article (“Collison at sea”), whereby an officer can command a destroyer with relatively little prior bridge experience. Problems were also evident with a large number of personnel on a warship’s bridge, with the OOD relying instead on non-commissioned quartermasters to fix the ship’s position and advise course adjustments.

A failure to learn from mistakes was compounded by an attitude of superiority and exceptionalism. The tendency for senior fleet command positions in the US Navy to be held by submariners and aviators rather than surface warfare officers meant that the surface fleet’s problems may not have been fully appreciated by senior commanders.

The credibility of American power in the Indo-Pacific depends largely on the surface warships of the Seventh Fleet being seen to be operated safely and efficiently. The recent accidents have damaged that image.

The US Navy, and the Seventh Fleet in particular, now faces challenges in living up to the image of being the best navy in the world.

More than 30 years after the Spycatcher case, espionage is back on Prime Minister Turnbull’s agenda – albeit in an utterly different form.
Euan Graham 2 Aug 2017 13:42

Can Boris Johnson deliver on his colossal naval expectations?

Many assume that China intends to replace American predominance in the Indian Ocean. But sea control seems unrealistic.