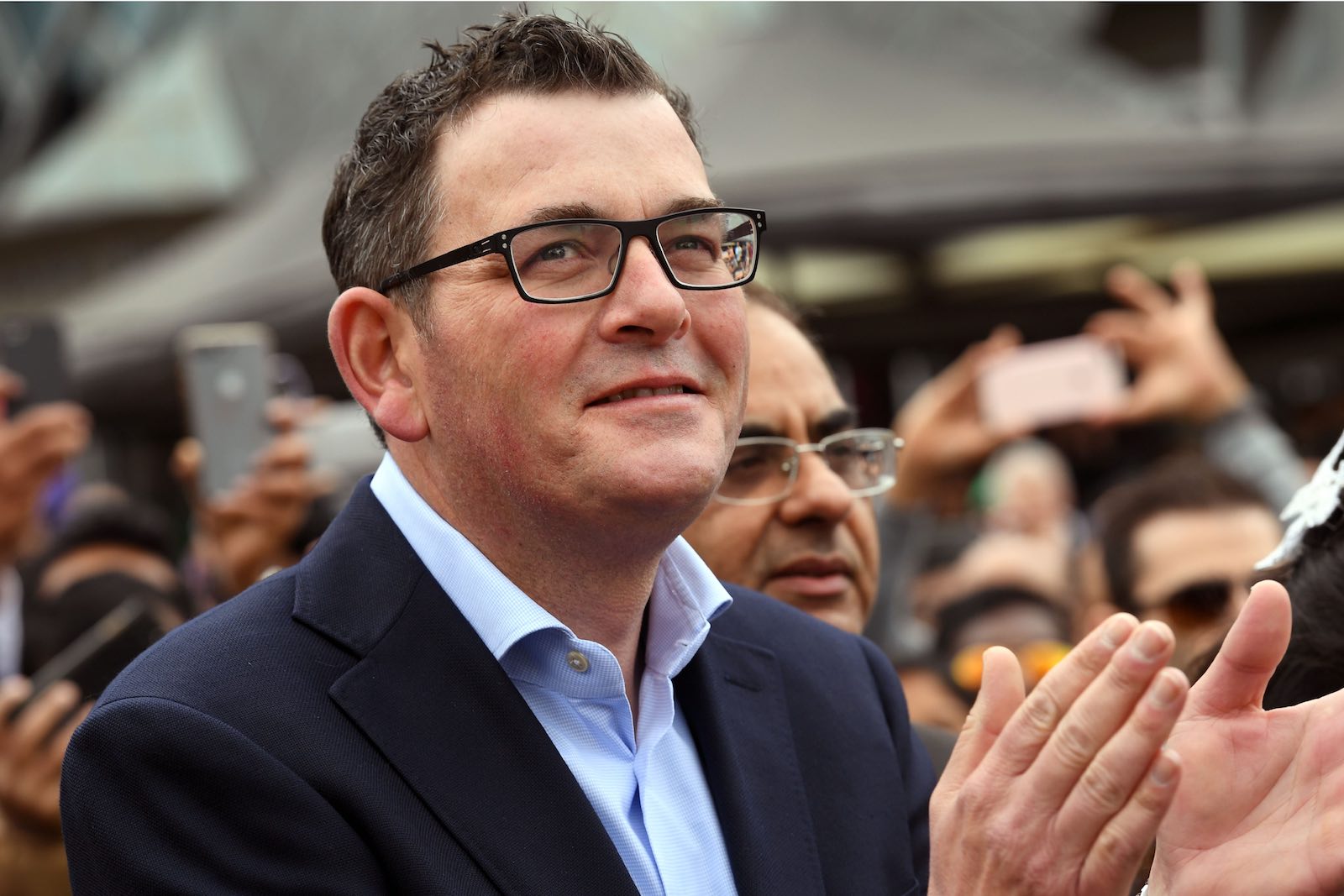 I thought to myself, here’s Xi Jinping walking past, here’s a chance to ask him a question. But instead he just gave me a wan look and a bodyguard quickened a step to put himself in the way, allowing the delegation to brush by before I got a word out.

It was Vice President Xi back then, in 2010, leading Chinese Communist Party officials on a visit to Melbourne. Local reporters, including me at the time, had been invited along as the group toured the headquarters of telecommunications company Telstra and later to a football match, but it was quickly apparent this meant observe and nothing more. 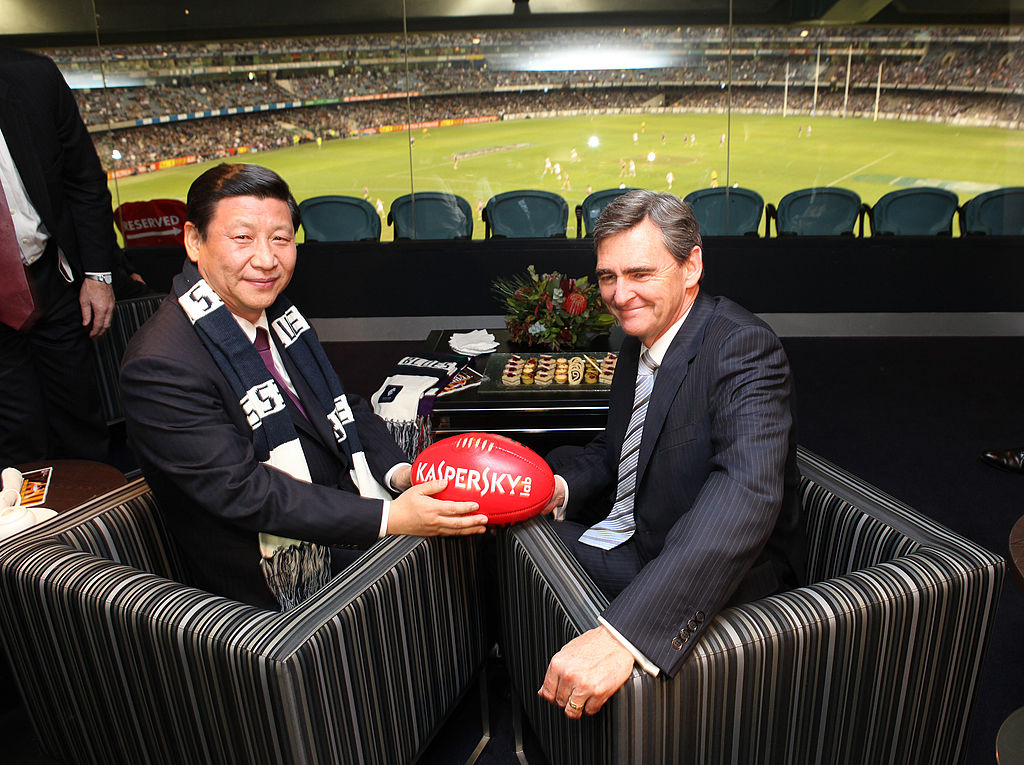 So I’d bombed as an effective doorstop journalist. But I did on a few occasions in the years following get to speak with the man who became premier in Victoria, Labor’s Daniel Andrews, mostly on local matters, but also about issues related to China. Victoria is Australia’s second most populous state, and like for all state premiers, if it’s not schools, police, and hospitals, it is questions about roads, rail, and other infrastructure that seem to dominate a leader’s time. Meeting those challenges often means turning to companies overseas, yet whatever the nature of foreign investment, for local politicians, it is the consequences for local jobs that matter most.

Perhaps this explains why Andrews has been so keen to help Victoria to a slice of China’s massive infrastructure pledge, the Belt and Road Initiative. Andrews put pen to paper on a memorandum of understanding with the People’s Republic last year, sparking criticism from the federal Coalition government – although the commentary was somewhat blunted when the document itself proved so vague to be practically meaningless.

Yet just as talk in recent weeks has focused on the inability of the Australian Prime Minister to score an invitation to Beijing, with Scott Morrison assuring us he’s “not waiting by the phone”, it was Andrews who travelled to China this week, happily signing Victoria up for another deal. This one has the rather grand title “Framework Agreement” on “Jointly Promoting the Silk Road Economic Belt and the 21st Century Maritime Silk Road”, although again, its practical meaning is somewhat mystifying.

Reading through, the agreement is full of empty homilies Beijing loves to promote. The text is rife with “mutual consultation”, “mutual learning and mutual benefit”, a “road map” for “common prosperity and development” and “green and clean governance” (take that!). And you can bet the prospect of seeing the Morrison government squirm is partly Beijing’s motivation (surely not for Andrews, although some, such as Home Affairs Minister Peter Dutton, won’t be as charitable).

Daniel Andrews has left federal government figures fuming by using his China trip to sign a new Belt and Road deal for Victoria and back a research agreement with an aviation giant linked to industrial espionage. ⁦@theheraldsun⁩ #springst #auspol https://t.co/iEEa7IZCcJ

As an agreement, what is disappointing is this latest one doesn’t make any new demands on Beijing, in the sense of going beyond what would be freely offered regardless. There is talk of complying with international rules and respecting the laws of the other country with “procedure open, transparent, and non-discriminatory”, but no explanation. Could this be read as a comment on Australia’s ban against Huawei on national security grounds or the opaque processes of the Foreign Investment Review Board? Or should it be seen as a reference to the fraught experience of foreign firms seeking to do business in China? It can be interpreted either way, yet perhaps neither is intended.

Having a state government sign a deal of this type is not exactly – how to put it? –  a display of a united front.

There is no money involved. The promise is to encourage Chinese firms (no distinction is made whether state-owned or otherwise) to tender for business in Victoria, but that hardly seems to warrant a nine-page “framework”. The tricky question of whether Chinese firms might want to bring workers along is dodged entirely. And what “third party markets cooperation” could entail raises intriguing questions, about the prospect of Victoria either extending the invition further to other BRI partners or explore opportunities elsewhere, but under what governance?

Some issues will be less vexed. The prospect for further cooperation related to an ageing population is important. This idea was raised during the Gillard-era “Asian Century” White Paper process, and as one researcher told me at the time, Australia could “save them a motza”, if by sharing expertise it can dent the expected demand in China for half-a-million hip replacements each year by 2050.

On the broad arrangement, at a time when Australia has plenty of challenges with China, having a state government sign a deal of this type is not exactly – how to put it? – a display of a united front. But Victoria has been at pains to note nothing in this agreement is legally binding. Perhaps it is simply an effort at signalling, to try push Victoria ahead in the queue should the gates truly open. The next step, apparently, is a “road map” by 2020. (The cynic in me recalls the drawn-out, step-by-step negotiations on a framework for a possible code of conduct around the South China Sea.)

Others will be harsh on Andrews for this agreement. Personally, I can’t see the harm of it, but equally, I don’t see the point. As to the criticism about bypassing the professional diplomats in the Department of Foreign Affairs and Trade, the headlines today suggest that Victoria is hardly alone there.