Nations have battled one another for strategic advantage in space for decades. Actual fighting would be a step beyond. 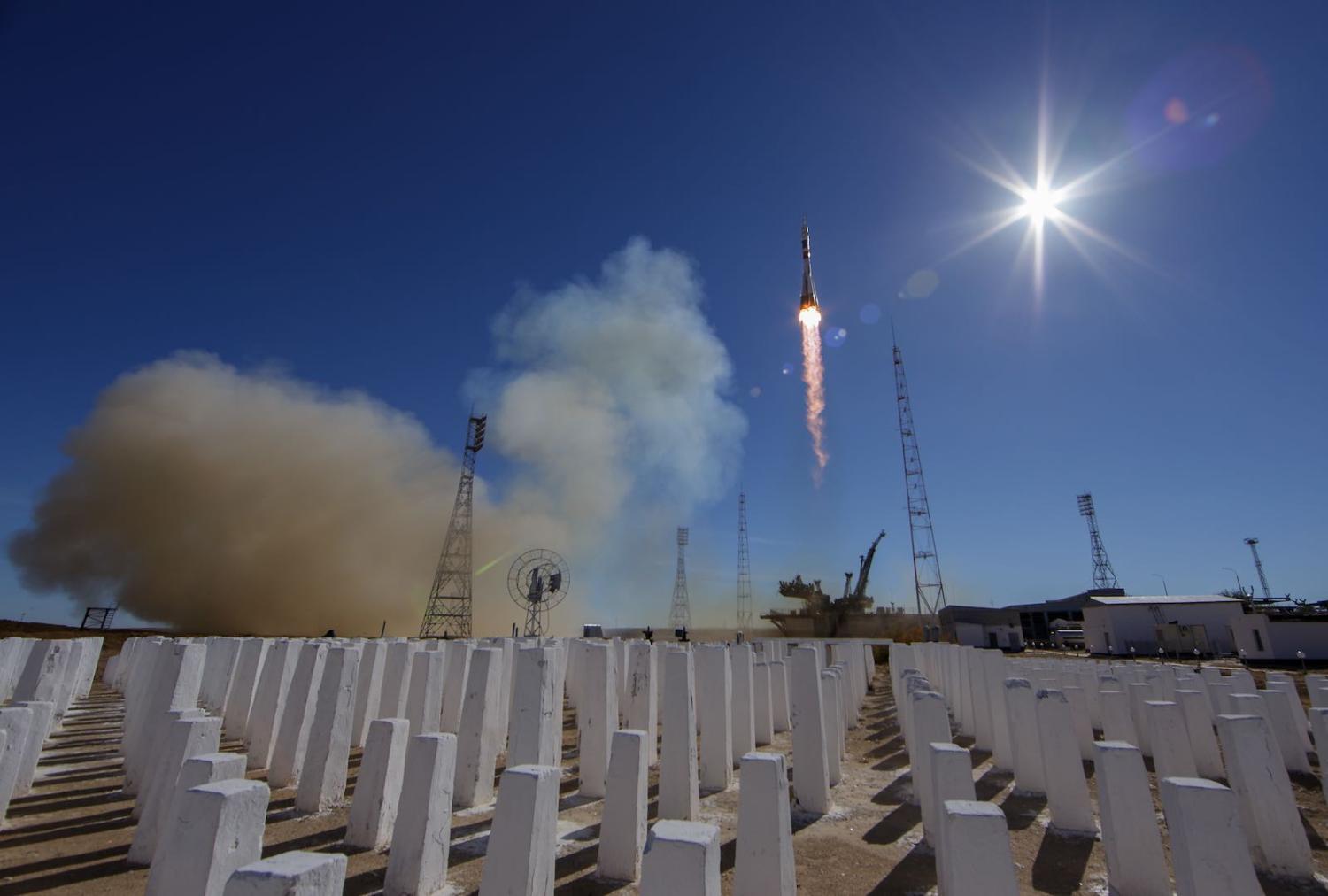 The US and Russia are at loggerheads over counterspace weapons, but in 2018 launched a joint mission on a Soyuz MS-10 spacecraft (NASA HQ PHOTO/Flickr)
Published 20 May 2020     Follow @Sara_Lisabeth

Politics does make for unlikely bedfellows. Last month, the Russian Foreign Ministry announced that it had signed a joint declaration with the Republic of Burundi, whereby both agreed not to be the “first” to place weapons in space. Two weeks later Russia conducted an anti-satellite missile test using its Nudol missile system – not itself a violation of the agreement, since the system is ground-based, but it’s a potent reminder that not all space-related weaponry needs to be “placed” in space.

The media coverage around the latest test – reportedly the 10th for this system – appeared to be more concerned with the response from the newly established United States Space Force than the test itself.

Almost immediately, the US Space Command issued a statement outlining its readiness to respond to acts of aggression in defence of US interests and those of its allies in space. General John Raymond, the commander of US Space Command, said that the test demonstrated “Russia’s hypocritical advocacy of outer space arms control proposals … while clearly having no intention of halting their counterspace weapons programs”.

The space arms control proposals Raymond was referring to have been the subject of ongoing debate at the UN since the 1980s, featuring regularly as an agenda item in the General Assembly’s First Committee and the Conference on Disarmament. For more than three decades, countries have failed to negotiate a treaty on the prevention of an arms race in space, or settle on an alternative.

The last time countries came to an agreement on arms control in space was in 1967, resulting in the Outer Space Treaty. This treaty, which serves as the basis for international space law, was primarily concerned with preserving outer space for peaceful purposes. It stipulated in no uncertain terms that the deployment or placement of “nuclear weapons or any other kinds of weapons of mass destruction” in outer space was prohibited. Unfortunately, the treaty said nothing of conventional weapons, such as ballistic missiles.

This means there is currently nothing in place that precludes the development, use, or testing of conventional weapons in outer space or counterspace weapons capabilities, such as anti-satellite missiles – often referred to as ASATs.

Russia is not alone when it comes to the development and testing of counterspace weapons capabilities. There are currently four countries – Russia, China, the US and India – that have demonstrated counterspace capability, according to the Secure World Foundation’s 2020 Global Counterspace Capabilities report. Of the four, Russia is the only one that hasn’t destroyed a satellite using a ground-based system.

At least in part, Russia’s test is likely a response to the US counterspace program, its Space Force, and its recent posturing around space as a battlefield. In a speech to the Pentagon on 9 August 2018, Vice President Mike Pence referred to comments made by President Donald Trump earlier that year, in which he explicitly stated that space is “a war-fighting domain, just like … land, [and] air, and sea”, and confirmed that the US would “meet the emerging threats on this new battlefield”.

And yet, for all this talk of emerging threats, the reality is spacefaring nations have been battling one another in a race for strategic advantage in space for decades. This is especially true given the vital role space plays in ground-based military operations, providing forces with the means to conduct timely and effective operations.

As long as space is framed as a battlefield, and with no arms controls in place to prevent the use or placement of weapons in space, countries will continue to develop and test counterspace capabilities.

Space as a battlefield is not inevitable, but “you can work yourself into it”.

Yet it need not be seen as a domain for conflict. In the interest of keeping space safe, stable and operational, it is worth noting the low likelihood that ASATs would be used in an armed conflict. Already there has been a push to move away from counterspace capabilities that are physically destructive and irreversible. As Pavel Podvig, director of the Russian Nuclear Forces Project and a senior research fellow at the UN Institute for Disarmament Research, notes, ASATs offer little in terms of military capability and strategic advantage.

Moreover, the potential chain reaction caused by the creation of space debris following such an attack would be detrimental for all involved, including neutral countries, commercial entities, and the international civil society. Given space debris begets space debris, a seemingly isolated incident can threaten all space assets in orbit and the infrastructure they support years after the fact. Consider the damage to the space environment caused by India’s ASAT test last year, which created at least 400 pieces of space debris, or the more than 3,000 pieces created when China destroyed one of its ageing weather satellites in 2007.

For its 2018–2020 cycle, the UN Disarmament Commission’s Outer Space Working Group will prepare a set of recommendations to promote the practical implementation of transparency and confidence-building measures in outer space activities. While such measures are a step in the right direction, they should not be viewed as a panacea. More needs to be done to ensure space remains accessible and operational for both military and civilian purposes.

Space as a battlefield is not inevitable, but “you can work yourself into it”, cautions Joan Johnson-Freese. So far, only France and the US have officially recognised the prospect of armed conflict in outer space, but the limited constraints on behaviour have given countries such as Russia, China and India the scope to continue to develop and test their counterspace capabilities.

Perhaps the next step is to pursue a policy of “strategic restraint”, as Johnson-Freese suggests, and make use of the transparency and confidence-building measures as a basis for developing a verifiable, and legally binding, prohibition on activities that cause harm or permanent damage to space assets. After all, we’re all losers in the space arms race.

Much more than only trade and investment, the Indonesian President has grander ambitions for the two neighbours.
Nick Aspinwall 15 Feb 2019 06:00

In the Philippines, activists increasingly face a “living hell”

Victims of “red tagging,” or the false branding of activists as communist insurgents, can be fatal in the Philippines.
Kelsey Munro 21 Feb 2019 06:00

China cabinet: the not-so-secret hack, plus the enemy of Freeman

The strange reluctance to call out a “sophisticated state actor”, and Xi Jinping Thought now policed via a mobile app.