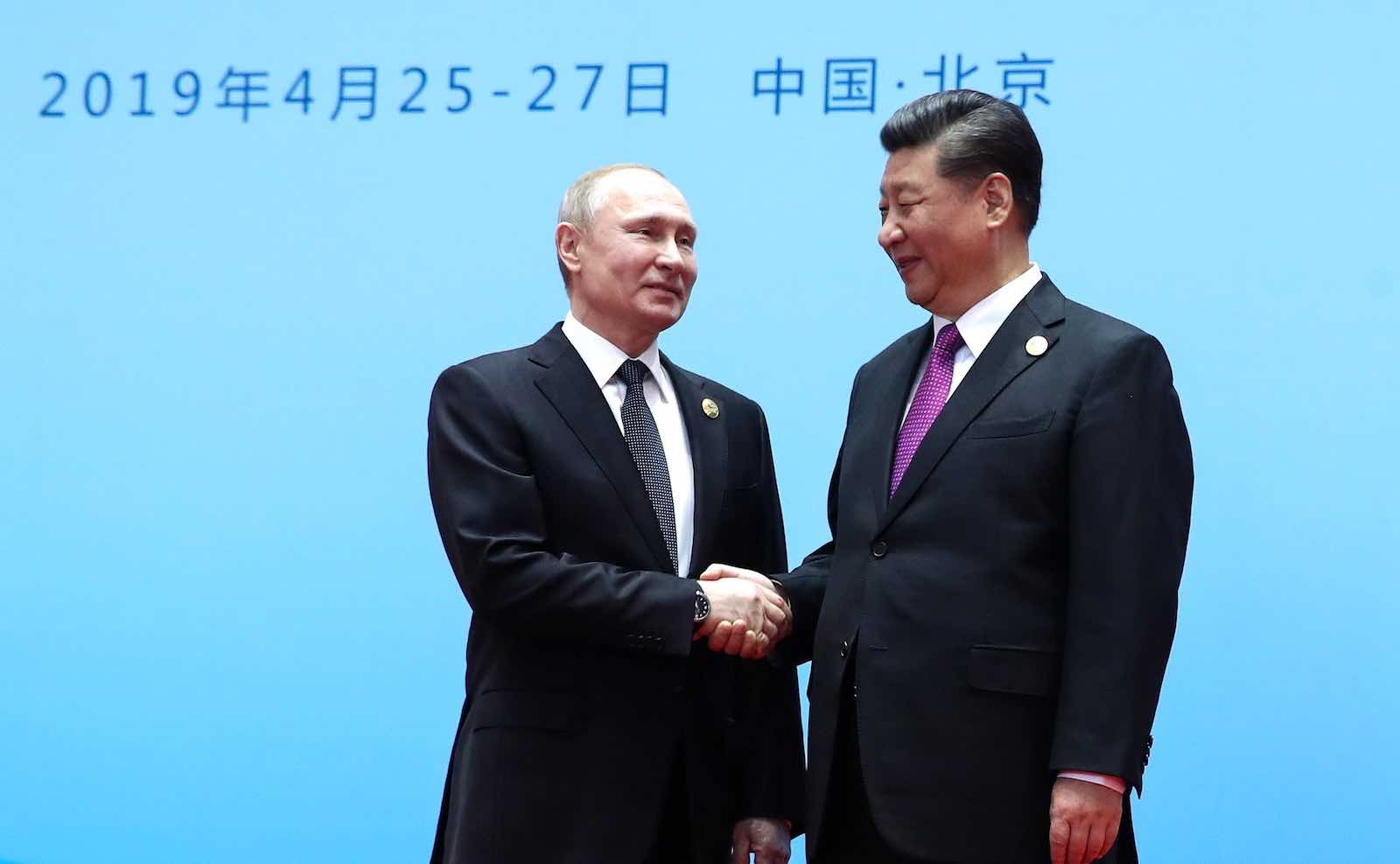 Last month, US President Donald Trump surprised allies by calling for Russia and Australia to be admitted together with India and South Korea to an expanded G-7.

Writing in support of the idea, federal Liberal MP Dave Sharma has cast the argument as a reversal of Nixon’s 1972 opening to Mao’s China, a “reshuffling of the deck” to balance China’s growing shadow in world affairs by peeling off a sanctioned but far from shrunken “global Russia” increasingly closely attached to China’s side.

Given China’s increasingly agonistic approach to Australia and Indo-Pacific states, such a policy commends itself by its realist credentials. But it would also acknowledge the role Western policies have played in accelerating the Sino-Russian rapprochement.

Certainly, Moscow and Beijing’s “axis of convenience” predates the sanctions imposed by the West on Russia in 2014: the Shanghai Cooperation Organisation (a forum for military cooperation and intelligence sharing originally focused on counter-terrorism) was founded in 2002; Russian President Vladimir Putin announced Russia’s own “pivot to the East”, before the outbreak of the Ukraine crisis, in 2013.

Russia and China are undoubtedly closer today than six years ago, but there is more to it than that. In the presence of Russia’s previously expansive relationship with Europe, a Russian pivot to Asia may have remained largely symbolic. In the presence of Western sanctions, however, it has instead become truly historic: Russia and China are closer today than at any point since the Sino-Soviet split that Nixon’s China policy seized advantage of.

In 2018, 3500 Chinese troops crossed the border to join 300,000 Russian counterparts in military exercises billed by the Russian ministry of defence as the largest its forces had participated in since 1981. Through a partnership with Russia’s sanctioned Sberbank (Russia’s biggest state-owned bank), Huawei seems this year likely to win not only construction rights to Russia’s 5G network, but also a vote of confidence in the reliability of Chinese technology that will commend a “tech” pax Sinaica to other BRICS and emerging states.

Economically, China has not only cushioned the economic blow of Western sanctions. It has overcome longstanding Russian sensitivities about Chinese investment in Moscow’s vast but underpopulated and underdeveloped Asian territories. (In the Russian Far East alone, an area almost the size of Australia, 6.3 million Russians look across the border at 110 million Chinese in China’s three northernmost provinces.)

Delivered via the 4857-kilometre Eastern Siberian Oil Pipeline, Russian oil exports to China more than doubled between 2013 and 2016, when Russia overtook Saudi Arabia as China’s major oil supplier, allowing Beijing to substitute a continental supplier to its north for one dependent on a maritime route policed by the US Navy to its south. Meanwhile, under a deal signed by Putin and Chinese leader Xi Jinping in May 2014 (just months after Western nations first imposed Crimea-related sanctions), the first deliveries of $400 billion worth of Russian gas from fields north of Lake Baikal arrived in China via the Chinese-funded “Power of Siberia” line last December. A “Power of Siberia” II is to follow.

In seeking to bring Russia in from the cold to balance China, Australia should make common cause with Tokyo and Seoul, as it should also with New Delhi. India has long recognised the importance of Russia to the Asian balance.

Moscow once frowned on Chinese investment in Siberia’s mining sector. But in the contemporary climate, China obtained its first stake in a Russian gold, iron and copper mining venture in 2015, 400 kilometres from the border. With Russia China’s largest supplier of timber, Chinese firms are deeply involved in one of the region’s major employers. And barely an hour’s flight from Beijing, Siberia’s open spaces have enormous potential as crowded North Asia’s “lungs” – before Covid-19 struck, the rush to build hotel (and, where relevant, cruise ship) facilities had begun, from Lake Baikal to Vladivostok.

When in 2012 Russia established a Federal Ministry for the Russian Far East, then-President Dmitri Medvedev warned of the danger of Russia’s Asian territories becoming a mere “resource appendage” of China. Reflecting the post-2014 shift in Russian attitudes, those qualms seem to have evaporated.

Thus, Russia and China announced plans for a $5.3 billion project for two “International Transport Corridors” linking China’s landlocked Heilongjang and Jilin provinces to port facilities in Russia’s nearby Maritime Province. If constructed, such corridors would provide China with direct access not only to the Sea of Japan (unhindered by the US Navy and its allies Japan and South Korea), but also an expanded presence in a province, which, though including the Far East’s biggest cities (Khabarovsk: 577,000; and Vladivostok: 605,000) has only been Russian since 1858. Modern Chinese maps often designate it as a historical Chinese territory.

Elsewhere, too, the West’s isolation of Russia has helped Moscow acquiesce in an expanded Chinese presence it would once have resented. Strategically and economically, the five former Soviet republics of Central Asia are a Russian-Chinese condominium, with resource-rich Kazakhstan and Turkmenistan as crucial planks in China’s Belt and Road Initiative (BRI).

Even in the Arctic, Russia’s traditional resistance to a larger Chinese role has softened. Just as China has sought (and obtained) recognition as “near-Arctic” state, so Russian authorities have suggested a role for China in constructing the infrastructure to connect the BRI to Russia’s Northern Sea Route.

That Western sanctions would drive a Russian rapprochement with China was predictable. Even now that it has happened, however, a certain “operating fallacy” prevents some analysts from extracting any downside in this for the West. As Ariel Cohen wrote in Forbes last year, “By anchoring itself to China with Power of Siberia pipeline, Russia closes many doors, and in the long run, endangers its own energy trade – and national sovereignty.”

But the mere fact that something is “bad” for Russia doesn’t make it “good” for the West.

Paul Stronski, a former director for Russia and Central Asia on the US National Security Council, identifies the implications better. Given that China “currently receives most of its primary imports through sea lanes from the south”, Stronski writes, “the Russian Far East provides not only a diversified source … a reliable and rich supply from its northern borders could also function as a hedge against a US Navy blockade”.

Alive to Russia’s significance to the Asian balance, Japan imposed a weaker, more “symbolic” sanctions regime than did Australia, following the US and Europe. Faithful to its “New Northern Policy”, South Korea imposed none at all. In 2018, the value of Korean trade with Russia rose almost a third.

In seeking to bring Russia in from the cold to balance China, Australia should make common cause with Tokyo and Seoul, as it should also with New Delhi. India has long recognised the importance of Russia to the Asian balance, has not imposed sanctions, and is exploring pipelines.

To “exclude” China from Russian Asia is as pointless as it is undesirable. Not all Chinese investment in Siberia or the Russian Far East is unwelcome: the poorer, emptier, and more underdeveloped these territories remain, the less Russia will have to contribute to any future, informal “coalition of the balancing” in Asia.

But the foreign investment needed should be diverse, lest the Chinese commercial penetration that is already occurring make a continental-size region of vast natural resources and immune to Western blockade, an effective extension of Chinese strategic space – a “Central Powers 2.0” stretching from Hainan to the Arctic Circle and Baltic.

As Sharma concedes, to bring Russia in from the cold, “the statecraft required is not easy, and the realpolitik underpinning it might be hard to stomach”. And – although in the history of “Russia-gate”, unsubstantiated intelligence leaks to the press have a record of proving over-egged – in a week that has seen the apparent revelation of Russian bounties on coalition troops in Afghanistan, it will be a particularly hard sell.

But balancing China alone is far more realistic than balancing China and Russia together. Certainly, the asymmetry in the relationship is unpleasant for Russia. But it does nothing to undermine the advantages that accrue to China.

Show 6 Comments
Previous Article
China eyes African prospects to iron out trade tension with Australia
Next Article
Consulting on Bougainville’s future: The what, who, how and when