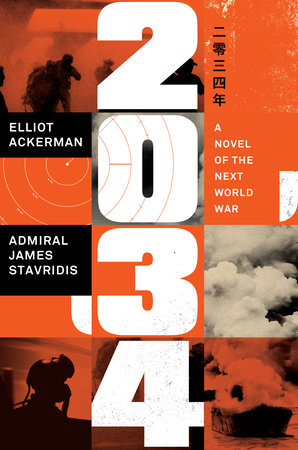 Book Review: Elliot Ackerman and James Stavridis, 2034: A Novel of the Next World War (Penguin 2021)

The book begins with a clash in the South China Sea – an imagined conflict, this being a work of fiction, but the authors explain having felt compelled to write because, in the tradition of Cold War cautionary novels, it is necessary for Americans to imagine the worst in order to avoid it. The same could be said for the rest of the world, too.

2034: A Novel of the Next World War is a well-paced character-driven thriller that reads like Tom Clancy’s best work in the first half but then delivers a gut-wrenching picture of the destruction wrought by peer-to-peer conflict. The speculative novel is written by Elliot Ackerman, a highly decorated former Marine, and James Stavridis, a retired US Navy admiral and former NATO commander. Stavridis explained in a recent podcast his intention was to deliver a warning because not only was 9/11 a failure of American imagination, but so was a 20-year war in Afghanistan.

And after the tensions displayed at last month’s meetings between the American and Chinese diplomats in Anchorage, Alaska, such imaginings do carry an additional edge.

However frightening, I appreciated that Ackerman and Stavridis identified what they were worried about regarding the potential trajectory of US-China relations (a failure to imagine the worst), and then did what they could to address that worry.

Their efforts contrast with the loudest voices in the current US debate over China policy, which sound like an advertisement of American insecurities: full of angst and short on solutions. This is partly due to the sheer number of China experts (and non-experts), weighing in. Some commentators are longtime practitioners with well-researched concerns about China’s ambitions but others are simply jumping on the bandwagon.

In order to gauge the threat posed by China’s actions throughout the world, it is necessary to establish a hierarchy of concerns. In Ackerman’s and Stavridis’ fiction, there is no single point of failure that leads to war in the year 2034, so the novel provides an opportunity for those concerned about China to assess what developments seem both likely and avoidable. For example, in the book, 2034 marks a point the Chinese to achieve a form of technical superiority that surprises and unsettles the US. At several points, US decisions in an escalating conflict with China fail to account for the agency of other actors around the world. America’s strengths – moral certitude and optimism about the future – become its weaknesses.

Both Chinese and American political leadership believe themselves capable of taking offensive military actions that will not lead to all-out war, and later see no alternative to mass destruction.

The plot involves a choice by the US president to dramatically escalate in response to both a Chinese attack on the US homeland and the capture of an American pilot by the Iranians. Two key domestic conditions contribute to the decision to escalate: a National Security Advisor scheming for an opportunity to project American power, and a united American public clamouring for revenge.

This scenario in which American domestic politics provide the necessary momentum for a disastrous world war seems too obvious, and perhaps overdone. And yet, to pull back from the doomsday scenario, the interplay between domestic politics and China policy in the recent past stands out as the most likely source of the angst in the current debate in Washington (versus concerns about technical inferiority, for instance).

Over the past ten years, the US has been treading water in terms of Indo Pacific policy because of American politics.

Over the past ten years, the US has been treading water in terms of Indo Pacific policy because of American politics. As American strategists shifted and evolved in their understanding of the threat posed by China, their efforts to meet the challenge have been hobbled by presidential transitions, and by one president in particular.

A bipartisan understanding of the complex set of challenges that China posed to the US began to emerge during the Obama administration. But according to Ryan Hass, the China Director at the National Security Council during Obama’s second term, the Trump team refused to listen to his brief during the transition, so the opportunity for continuity of effort was lost.

The capable national security team that served Donald Trump in the early days produced the 2017 National Security Strategy, which provided relatively clear guidance to practitioners on the multifaceted effort that would be required to meet the challenge China posed to US interests. But there was good reason to question Trump’s commitment to the strategy from the onset, and his administration’s approach to the challenge devolved into gratuitous insults and rhetoric that reflected a zero-sum mentality.

The stops and starts that thwarted progress up until this point do not preclude the Biden administration from forming and executing good policy. But it must also be acknowledged that such efforts will be vulnerable to domestic politics. This point is likely more obvious to America’s allies and friends than it is to Americans who are inclined towards optimism about their future endeavours.

A bipartisan consensus on China exists in general terms. Democrats tend to emphasise working with allies to maintain multipolarity in the Indo-Pacific and create constraints on Chinese actions, while Republicans emphasise military superiority, but the congressional policymakers directly engaged in the issue are aligned on the requirement for both approaches to meet a complex challenge.

The greatest danger is the election of another disrupter like Trump. One advantage Americans possess in this area is that no imagination is required.

Show Comments
Previous Article
No surprise: Spying from space is a good thing
Next Article
Sticks and carrots in Biden’s Russia strategy