Labor’s Shorten has a domestic focus, but he has left space for independence in navigating major-power relationships. 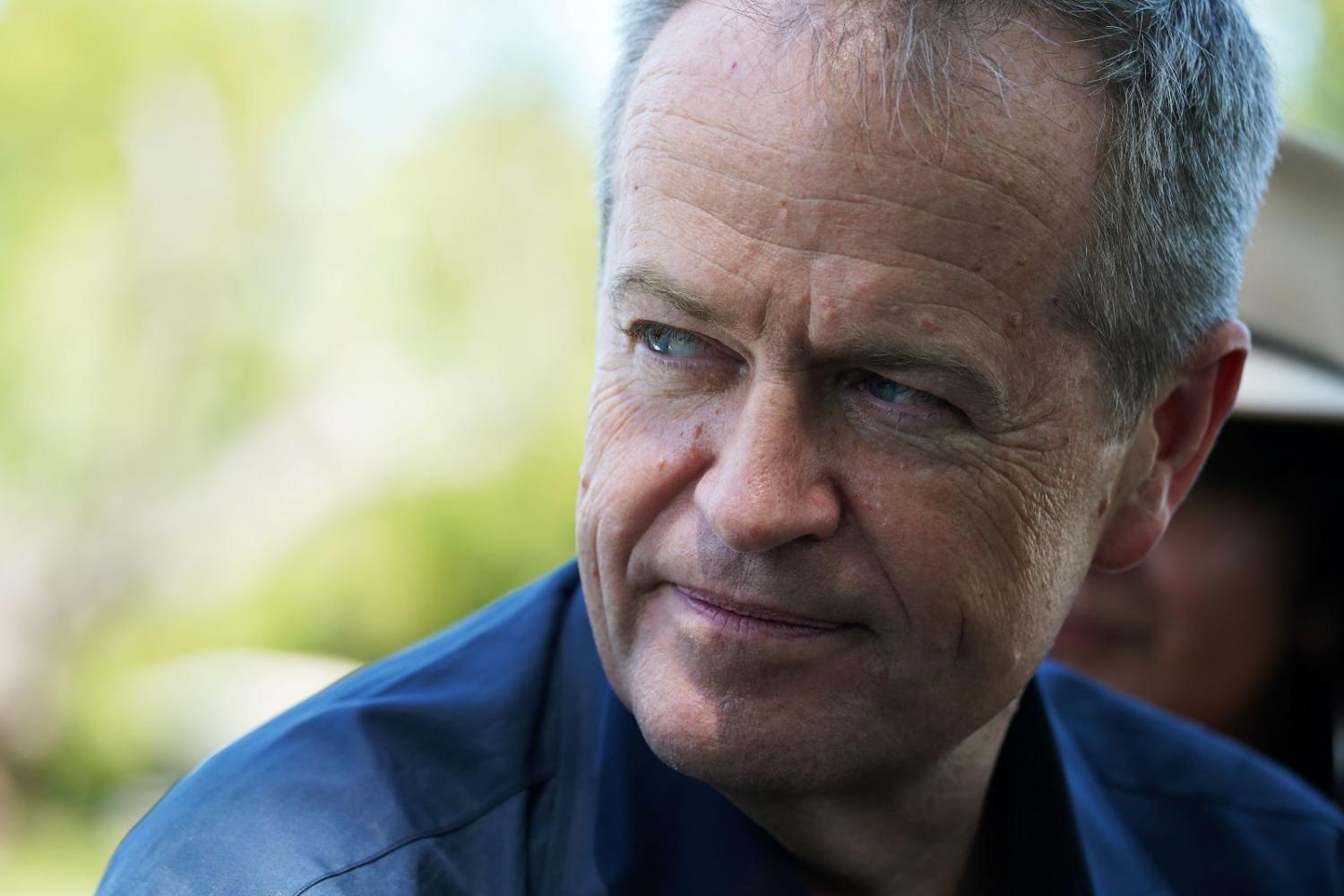 Shorten on the campaign trail, 18 April 2019. One clear difference between the parties will be on climate diplomacy. (Photo: Stefan Postles/Getty)
Published 26 Apr 2019     Follow @FemInt

When I was challenged by The Interpreter to think about the worldview of the Opposition Leader Bill Shorten in June 2016, it was tempting to use US analogies. I argued Shorten was far more like Bernie Sanders than Hillary Clinton; embedded in a domestic agenda stressing fairness and redress for economic and social inequality. (Ah, the past is a foreign country...)

Shorten follows his Labor predecessors Julia Gillard and Bob Hawke in this domestic focus. Kevin Rudd was more the anomaly than the rule for Labor leaders with his international interests and diplomatic background. For the 2019 election Labor is campaigning on fairness but no policies are squarely in the realm of traditional foreign policy.

The ALP will appoint a Global Human Rights Ambassador, who will have responsibility for the advancement of disability, LGBTIQ, ethnic and religious minority and other human rights, and it supports the Magnitsky Sanctions Bill.

Conventional wisdom has it that Australians tend not to vote with an eye to foreign policy issues anyway, despite the 2006 Lowy Poll finding that 82% of respondents thought “it will be best for the future of Australia's if we take an active part in world affairs”. In the 2018 Lowy Poll, only 17% of Australians said they are “satisfied with the way things are going in the world today”, while 78% are dissatisfied.

One explanation for why Australian political leaders tend not to cultivate much foreign policy expertise is that there is just not that much difference in foreign policy between the two parties. In my view this is a good thing, and a bipartisan approach should be encouraged.

The Labor party’s National Policy Platform reflects generally the trends identified by the 2017 Foreign Policy White Paper: “The current global context is one characterised by disruption – one in which the magnitude and nature of change influences Australia’s strategic, economic and foreign policy interests.”

What differences there are in foreign policy stem from a difference in foundations, as former Shadow Foreign Minister Tanya Plibersek phrased it in her 2016 address to the Lowy Institute. Labor emphasises Australia's good international citizenship with a multilateral approach, while the Coalition has emphasised bilateral relationships and priority on trade agendas.

However, in the eyes of voters reading scant reportage and discussion of foreign policy issues, this difference in emphasis and the consequent differences in policy may not always be apparent.

Shorten is certainly interested in transnational issues and the process of globalisation as it disrupts the lives of middle-class and working-class Australians. As he said at the Lowy Institute in 2018: “John Curtin and Ben Chifley...understood the connection between the lives of working Australians and the corridors of international diplomacy.”

One of Shorten's "100 positive policies" in the last election was to crack down on tax avoidance by multinational corporations, an issue that would require international cooperation through initiatives like the OECD/G20 Base Erosion and Profit Shifting project. The ALP 2019 election platform states as a key pillar: “Make multinationals and millionaires pay their fair share”.

This focus is also clearly present in the trade portfolio, which receives the most detailed treatment in the National Policy Platform. This is despite ALP weakness in Opposition in seeking accountability on human rights standards through the Trans-Pacific Partnership and various FTA negotiations. Shorten is clearly influenced by transnational labour movements in relation to labour provisions in trade agreements like the China-Australia Free Trade Agreement (CHAFTA), and will seek to dismantle investor-state dispute settlement clauses if he wins office.

One clear difference between the ALP and the Coalition in 2019 will be on climate diplomacy. Shorten spoke at the Lowy Institute in 2015 on the topic of international action on climate change. The National Policy Platform also contains a detailed chapter on environmental diplomacy. Nonetheless, the ALP has walked both sides of the street on the Adani coal mine issue.

Clear differences with the Coalition in the foreign policy portfolio include:

The ALP will also pursue the recognition of Palestine, sign the new Treaty on the Prohibition of Nuclear Weapons and an increase to foreign aid, but final decisions will be left for cabinet under an agreement struck between the party's factions at last year’s National Conference. This means an elected Labor Cabinet would have final say on these issues, making them more aspirational than binding.

The next Labor government will not deal with China purely through the prism of worst-case assumptions about its long-term ambitions. Pre-emptively framing China as a strategic threat isn’t a sufficient response to its role and increasing influence in our region…We will deal with China on the basis of the actions it takes – and in our own national interests.

This clear accent carves out some policy space with respect to the US, which is unusual for Australia. Shorten famously stated in 2016: “I think Donald Trump’s views are just barking mad on some issues. America’s a great friend of Australia; whoever they dish up we’ll work with, but wow, Trump’s sort of – it’s sort of the ultimate victory of celebrity politics.”

In Shorten’s 2018 speech at the Lowy Institute, this position became more nuanced but nonetheless stresses independence:

Australia’s interests will obviously be different from those of the United States in some areas; our national focus is different, our relationships with our close neighbours are different, our economies have different structures. And indeed differences in perspective and opinion are one of the many valuable qualities we bring to our alliance with the United States. The Labor Party opposed the second Iraq war – and in view of the consequences, we were more responsible allies for doing so… We can – and will – express any differences within the enduring framework of our close relationship.

Bill Shorten is also very comfortable that this clear Australian accent comes from senior Cabinet women rather than himself. Senator Penny Wong is a key Cabinet member who chose the foreign affairs portfolio, and on foreign policy Shorten tends to defer to her (as Julia Gillard did to Stephen Smith and Kevin Rudd, and Paul Keating did to Gareth Evans). Senator Wong made a series of thoughtful speeches on foreign policy in 2018, and comes closest to building a doctrine since Rudd and Evans.

This strong female leadership in Australian foreign policy is welcome. The competence of Tanya Plibersek and now Penny Wong as Shadow Foreign Ministers has allowed Shorten to stay in the comfortable space of "globalised homebody", and the Australian polity is none the poorer for it.

There is no doubt, however, that any Australian Prime Minister will have trouble with the international impression that they won't be around long enough to warrant investing in as an international leader. Shorten has been Opposition leader for three Prime Ministers now so he does represent a more stable option. The ALP changed its rules after the Gillard-Rudd upheaval to make it near impossible for Labor to oust its own PM.

Yet outside Canberra, the world does not know Bill Shorten. This is Shorten’s greatest foreign policy challenge: to last a full term and build an international profile. Otherwise that clear Australian accent will not be heard.

Previous Article
Culture cringe: Laughter links Australia and Asia
Next Article
Tsai wins US sympathy, but what about Taiwan’s voters?

Australian defence: what the 1930s foretells for the present

A new volume on the country’s interwar foreign policy decisions takes us back to the future.
Dhruva Jaishankar 17 Mar 2017 13:24

The latest election results strengthen Modi’s hold on political power in India, but we can expect a lot more of the same in his approach to international affairs: some risk-taking, more energy, greater clarity, and a dash of showmanship.
Ian Kemish 3 Feb 2022 06:00