Bhutan: Happy days for the jab in between a strategic pinch

The rollout of Covid-19 vaccinations is a remarkable achievement for the kingdom. More tests lie ahead. 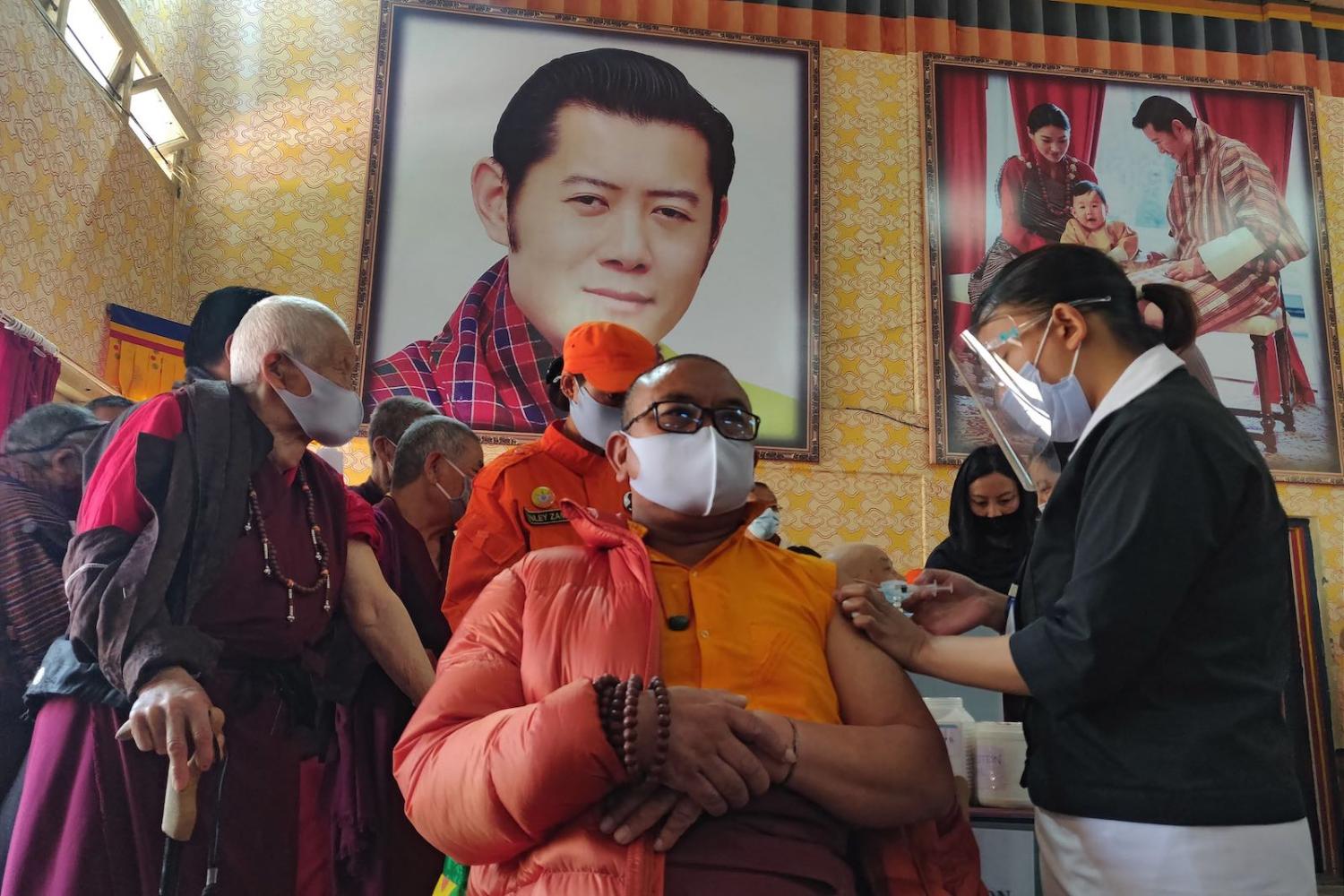 Bhutan, the tiny kingdom situated high in the Himalayas between India and China, has emerged as an unlikely Covid-19 vaccination success story. In the fortnight between late March and mid-April, its government vaccinated 93% of its adult population, or 63% of its population of just over 750,000. By any metric, that is a commendable result, but even more so when taking into account the country’s mountainous and sparsely populated terrain, the high rate of poverty, and the fact that the country only has 337 doctors, one for every 2,300 people. When countries far richer, with far more sophisticated infrastructure, medical care and logistics are unable to vaccinate anywhere near that number, Bhutan’s efforts are something to marvel at.

The government has acknowledged a few reasons for its success: medical doctors in key government positions (including the Prime Minister Lotay Tshering) means they have a deeper understanding of the pandemic and the ability to plan and act decisively; its small population which helps it stay nimble; help from the Asian Development Bank and Unicef; as well as being thoroughly prepared.

But there are other factors to add to the list. Bhutan, like other Asian countries such as Vietnam that have had success in containing Covid, is mostly Buddhist, and Buddhism is regularly inserted into public and private life. The religion, at its core, urges members to live collectively rather than individualistically, and Buddhists understand that collective action is what is required to live harmoniously, or, in this case, to stave off the pandemic threat. Bhutan is most famous for its official government policy of Gross National Happiness, which elevates quality of life metrics over economic development. This too, has contributed to the notion that Bhutanese have a better chance of staving off the pandemic by acting in ways that benefit all of society.

Another factor is the high level of control that the Bhutanese government retains over daily life. Bhutan embraced democracy late in the day, holding its first ever elections in 2008 after decades of monarchy rule, yet still, the government consists of a number of layers that help maintain central control – to the point of over-governance.

For example, the country is divided into 20 dzongkhags, or local government divisions, which handle decision-making for all institutions in their area. A foreign volunteer in Bhutan once told me that even simple decisions at the school she worked at had to be made by the dzongkhag, which dragged out decision-making unbearably. At the same time, however, Bhutan already has a generous comprehensive universal healthcare system that covers even kidney transplants. If complex treatment is needed, patients are sent to India or Thailand at the government’s cost.

Situated between India and China, Bhutan is the pebble between two boulders – and is starting to feel the pressure.

Finally, the Bhutanese reverence for its monarchy. Currently ruled by the fifth king, Jigme Khesar Namgyel Wangchuck, a 41-year-old Oxford graduate on the throne since his 20s, he is the official leader of the country and has a lot of influence over policy. Bhutanese deify their king, with his picture sitting alongside those of the Buddha and other religious figures in household shrines. So when the king asks citizens to join the national volunteer service (Desuups), they say yes. It is the desuups volunteers who are credited with doing the heavy lifting of the Covid vaccination program, with teams heading out to far-flung and isolated mountain villages, sometimes on foot, sometimes through snow to ensure everyone eligible received the vaccine.

Their efforts made sure of one thing: that, perhaps for the first time, Bhutan has been in the international headlines for something other than the pageantry around its monarchy or Gross National Happiness (which is, particularly as we head towards the post-pandemic world, actually very sound and meaningful policy).

But the tiny kingdom is also starting to make waves for another reason: its geopolitical positioning.

Situated between India and China, Bhutan is the pebble between two boulders – and is starting to feel the pressure. For decades, it has been firmly aligned with India, which donates almost a billion dollars (US) each year, and also supplied most of its Covishield – the Indian-produced AstraZeneca – vaccine stocks. China, on the other hand, is agitating to make inroads into Bhutan – literally, via claiming a portion of its territory along the 400-kilometre border running between them. India probably doesn’t even need to direct vaccine diplomacy towards Bhutan, but is not going to miss this opportunity to shore up its influence over its neighbour, as New Delhi continues to fend off Beijing from other fronts.

For Thimpu though, focusing on meeting the needs of its citizens generally outweighs the desire to weigh in on geopolitical manoeuvring – something that has been amply on display this past month.

On his trip to Jakarta, Scott Morrison should raise the disturbing trend to repress religious minorities in Indonesia.
Muhammad Zulfikar Rakhmat 16 Nov 2022 05:00

Beijing sees Indonesia as a major contributor to its food security and this has found receptive ears in Jakarta.
Andrew Blakers 11 Mar 2019 13:00