Short on details, the US president’s policy positions still leave plenty of room for speculation. 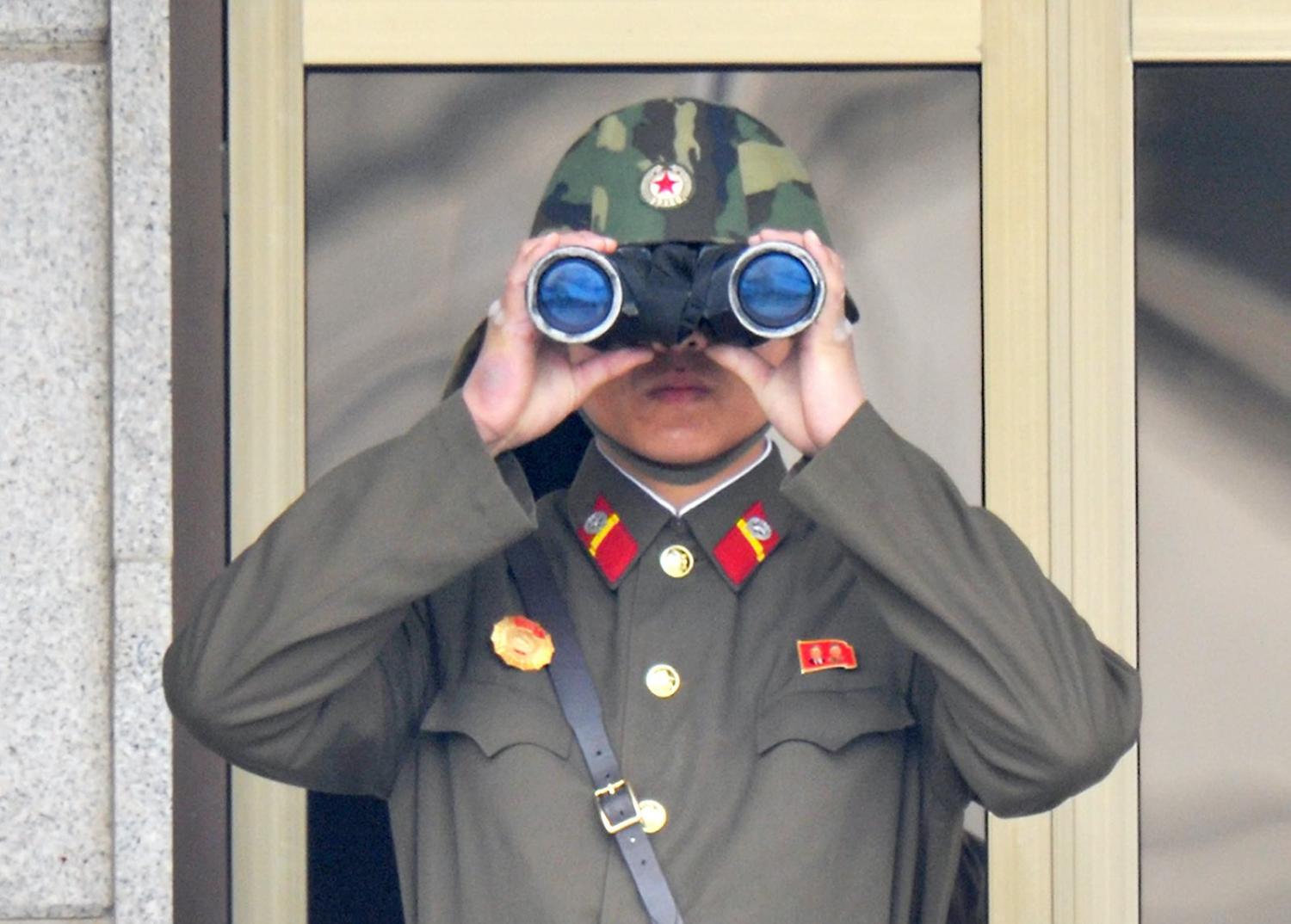 A North Korean soldier watches from his quarters at the truce village of Panmunjom in the demilitarised zone, April 2013 (Kim Jae-Hwan/AFP via Getty Images)
Published 6 May 2021     Follow @mllesookim

The Biden administration recently announced it had completed its North Korea policy review. The White House, through several public statements in recent days, dropped crumbs of details about its approach towards the Kim Jong-un regime and its advancing nuclear weapons program. Depending on the policy slant, statements could be interpreted in different ways and mean entirely different strategies towards Pyongyang.

There hasn’t been a shortage of speculation about Biden’s potential policies towards North Korea. Based on prior US dealings with the Kim dynasty, some informed guesses about Washington’s approach towards Pyongyang under the new administration can be had. Here’s mine.

First, we know the White House will take a “calibrated practical approach” and is “open to diplomacy” with the North Koreans. There may be a temptation to magnify the second half of this comment provided by White House press secretary Jen Psaki and deem this a reflection of the Biden administration’s absolute willingness or desire to engage with the Kim regime.

The ball may be in North Korea’s court, but when, how and in what direction Kim decides to pass the ball back to the US will in turn determine Washington’s policy options in response – and Kim’s fate.

But this assumption may rest more on the expectation – or hope – that the new US administration will seek to salvage the remnants of Washington’s engagement over the past four years with Pyongyang at summit meetings in Singapore and Hanoi and resuscitate the momentum for talks and eventual negotiations for denuclearisation. If there is one lesson learned from the summitry with North Korea, however – recall the four-point Singapore Joint Statement and the Hanoi meeting that culminated in no deal – it’s that talks with the North Koreans should be considered warily.

An informed guess might instead rest on what the administration coins as its calibrated practical approach. Not surprisingly, this suggests a break from the Trump administration’s pendulum swing from “fire and fury” to summitry sparse in substance. At first glance, calibration alludes to moderation of some kind. A calibrated approach towards North Korea may imply that Washington has a range of policy measures or responses to Pyongyang’s actions. To borrow the Kim regime’s words, the US may press for “corresponding measures” to North Korean actions.

For example, Pyongyang’s missile provocations may be met with sanctions, diplomatic rebuke or, in some cases, Washington downplaying the threat. Likewise, the North’s continued, irreversible rehabilitated behaviour to verifiably reduce its nuclear threat or address the Kim regime’s shoddy human rights record may help Kim Jong-un earn acknowledgement from the US for progress and reforms. Measure for measure, in short.

Second, the Biden administration has opted to emphasise the words “denuclearisation of the Korean Peninsula”, rather than the denuclearisation of North Korea. This may be problematic, as co-opting the former expression may lend the impression that Washington is subscribing to the Kim regime’s agenda of weakening the US–South Korea alliance and evicting US troops from Seoul. Or, at minimum, this may suggest an overlooking of the far-reaching implications of the expression. Such language may be welcomed by some countries – South Korea, notably – that prefer to subscribe to a different interpretation of the term, on the grounds that it will be less threatening to Pyongyang and thus more effective in convincing Kim to engage in denuclearisation talks.

Finally, and perhaps most importantly, US Secretary of State Antony Blinken’s recent comments that the US will look to see not only what North Korea says but what it actually does may suggest Washington’s watchfulness of Pyongyang’s moves. Should this be the case, perhaps the US will attribute greater accountability to North Korea for the regime’s words and actions. It may also spell political, diplomatic and economic consequences for any distasteful behaviour on Pyongyang’s part.

In the same vein, Blinken told reporters that “it is up to North Korea to decide whether it wants to engage or not”. Rather than attributing deference or control to the Kim regime, Blinken’s comments may serve as a diplomatic yet onerous warning to Pyongyang that the heavy burden of engagement rests with the regime. The ball may be in North Korea’s court, but when, how and in what direction Kim decides to pass the ball back to the US will in turn determine Washington’s policy options in response – and Kim’s fate.

All of this is indeed speculation, although we may not be in the dark for much longer. US President Joe Biden is slated to meet with South Korean President Moon Jae-in on 21 May for their first in-person summit since the inauguration. The two sides are expected to discuss a range of policy issues, including curbing the Kim regime’s nuclear ambitions and addressing its poor track record on human rights. The Biden administration may unveil its North Korea policy in full after the US–South Korea summit.

In the meantime, the guessing games will continue.

Relative peace and stability is entirely possible without US dominance. But this will require an honest evaluation of the limits of US power and influence.
Victor Abramowicz 21 Dec 2020 06:00