The anti-communist purge in Indonesia in the 1960s is retold in a compelling examination of US Cold War policy. 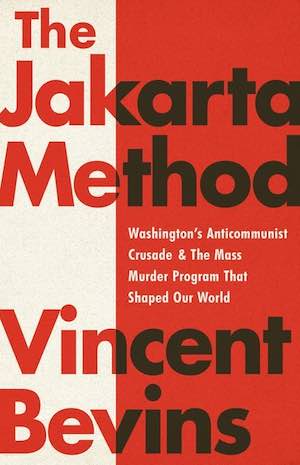 The world is awash with reports of alleged Chinese interference and influence operations in diverse countries and international organisations.  This is usually seen as evidence of China’s efforts to shape the world to suit its interests and undermine the US-led postwar rules-based world order.

Despite the expressed outrage in the West, China’s alleged behaviour should not be surprising. Great powers have always tried to dominate the world they live in. Indeed, Vincent Bevins’s new book, The Jakarta Method shines an important light on US efforts to forge a capitalist world order during the Cold War.

Bevins is able to enrich our knowledge of this overlooked chapter in Cold War history thanks to reporting on recently declassified CIA documents, as well as interviews with survivors. The most important case that he deals with took place in Indonesia, culminating with a coup against President Sukarno in 1965.

Sukarno was a founding father of the newly independent Indonesia following the Second World War. He was a visionary who brought together different religions, ethnicities and political strains on the almost 18000 islands to create today’s Indonesia.

Bevins writes in the early years of the Cold War the US felt that it could deal with Sukarno, even though he was left-leaning and a strident anti-colonialist. But America became concerned in the 1950s when the Indonesia Communist Party started performing better and better in elections.

And then Sukarno emerged as a leader of the Third World when he organised an important meeting of the countries of Asia and Africa, the 1955 Bandung Conference. The mission was to stand up against former colonial masters and challenge the rules of the world order.

Sukarno became a bogeyman for Washington, Bevins writes, needing to be deposed. So the CIA moved into action, generously funding a right-wing Muslim party, with little effect, so it then armed and supported a separatist movement within Indonesia. The CIA even made a pornographic film, produced by Bing Crosby, in which they attempted to discredit Sukarno by depicting his voracious sexual appetite. The movie was so bad that it was never released. An assassination was planned, but the CIA did not go through with it.

Frustrated, the US shifted tactics, writes Bevins. From 1958 to 1963, it hosted thousands of Indonesian army officers in Kansas to give them training in anti-communism and in American values. This also included late night visits to salacious bars and generous stipends.

Bevins argues that this Indonesian episode was a turning point in the Cold War, and critical for the US construction of a capitalist world order.

US relations with Indonesia deteriorated further when Sukarno picked a fight (“konfrontasi”) with the British over the formation of Malaysia. And following the assassination of John F. Kennedy, President Lyndon Johnson decided to take a harder line with Indonesia.

Bevins records that the CIA and Britain’s foreign intelligence service MI6 decided to agitate for a clash between the Indonesian army and the unarmed communists in 1965–66. This provided the pretext for the army to crush the Indonesian communist party. At every step, the US backed and assisted in what resulted in the massacre of as many as a million Indonesians.

These victims were mostly members of the Indonesian Communist Party, the world’s oldest and third largest communist party at the time. The CIA handed over lists of alleged communists to the Indonesian military.

The chaos enabled military leader General Suharto to seize the presidency from Sukarno. As Suharto consolidated power, about another million Indonesian leftists were interned in concentration camps for a decade or so. Bevins charts Suharto years after as a faithful US ally, benefiting from aid and opening the economy to US companies. Concern about Indonesia and its authoritarian capitalism was rarely heard of for decades.

Bevins argues that this Indonesian episode was a turning point in the Cold War, and critical for the US construction of a capitalist world order. In the early 1960s, the US foreign policy establishment was convinced Indonesia, with the world’s fourth largest population, was far more important than Vietnam. Indeed, in a short time the US achieved in Indonesia what it didn’t achieve in a bloody decade in Indochina.

Moreover, anti-communists around the world saw how effective the Indonesian campaign was and started talking about the “Jakarta Method”. Bevins reports that during the the Cold War, more than 20 countries carried out mass murder, backed by the US, to get rid of leftists, notably in Latin America through “Operation Condor”.

The legacy is long-lasting. While the narrative of the rules-based order is flooded by idealism, memories of dark and deadly operations linger, along with resentments. Confronting this troubling history is essential to understanding the modern world.