This quietly radical book calls on Australia to plan as if our US alliance will diminish to the point of vanishing. 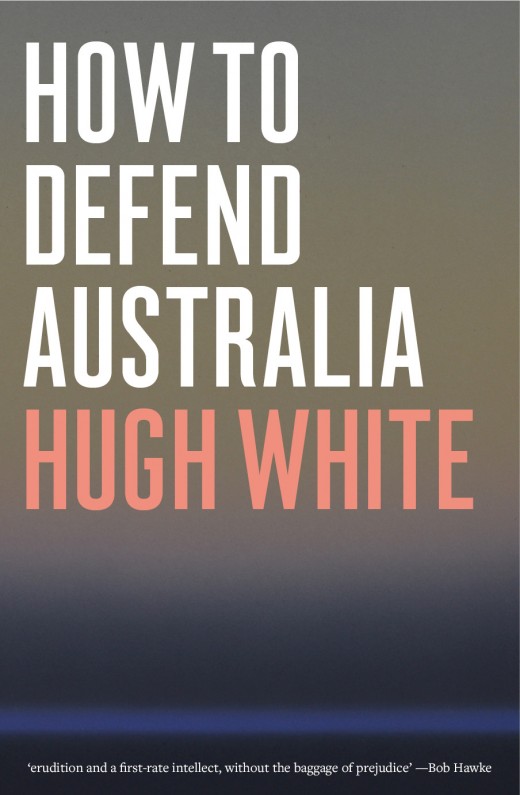 Defence commentator Hugh White never shouts from the rooftops, and his new book How to Defend Australia is written in the same measured tone that has long driven his more strident critics crazy. Yet if White is correct, he has uncovered a colossal scandal at the heart of Australian government. Both major parties are responsible but neither is ready to fix it. In fact, according to White, our politicians, the Australian Defence Force and the Defence Department are basically agreed on a course that will make the problem worse.

Before we get into that, let’s step back a moment to consider the premise on which this book is built. White begins by recapitulating the argument he made in his 2017 Quarterly Essay, Without America, which is that in the struggle for strategic leadership in Asia, China will win and America will lose. The course of this struggle has been evident for some time, given China’s growth trajectory and its ambition to be the leading power in Asia, as well as America’s half-hearted efforts to maintain its leadership against a challenger stronger than any America faced in the 20th century.

Thanks to the 9/11 attacks and the faith of our political class in the strength of the US alliance (I use the term “faith” advisedly; belief in the alliance has acquired a near-religious quality among our politicians), Australia has failed to grapple with the consequences of this power shift. How to Defend Australia aims to address this failure.

This quietly radical book calls on Australia to plan as if our alliance with America will diminish to the point where, if China ever threatened Australia with force, we would be on our own. What are the practical implications of that judgment? Well, according to White, we will need to raise defence spending to at least 3.5% of GDP, quadruple the size of the submarine fleet, double the size of our fighter-aircraft force, sell three air warfare destroyers which we have only just built, cancel the $35 billion contract for nine new frigates, and turn the army into a light constabulary force. Also, we should study the acquisition of a fleet of submarines armed with long-range nuclear-tipped missiles, similar to those operated by France and the UK.

Did I mention that this book is radical?

To put it mildly, the bipartisan political consensus on Australian defence policy is nowhere near White’s position. Yes, our major parties have hardened their China stance in recent years, for which White himself can claim some credit. And both parties have agreed to raise defence spending to 2% of GDP.

According to White, we are locking in a defence force for a generation that will be totally unsuited to the world we are entering. That’s the scandal.

But both sides also support a dramatic increase in domestic shipbuilding that sharply raises the cost and delays the construction of warships and submarines. They agree on building a fleet of large and expensive surface ships which, despite their sophistication, will be hopelessly vulnerable if it ever comes to a fight with China. And they support building an army which can be transported around on huge amphibious ships that would also be floating targets if China, or for that matter any modern military force, was the adversary. According to White, we are locking in a defence force for a generation that will be totally unsuited to the world we are entering. That’s the scandal.

White’s argument for China’s rise and America’s diminishing status in Asia is built on a dispassionate analysis of the historical and contemporary facts. It is, in my view at least, convincing. So is his diagnosis of what is wrong with the current and planned Australian Defence Force, and the central premise that Australia needs a defence force which can independently defend the continent against a major power.

Yet it’s hard not to be shocked at just how big White’s alternative ADF would need to be. The reason for doubt is that White’s description of the Chinese military threat is a bit underdeveloped. At one point he says China could conceivably operate 10% of its advanced fighter aircraft fleet against Australia, but that’s about as detailed as it gets. We don’t hear much else about what China could throw at us. In a book about Australia’s defence, the enemy doesn’t make enough of an appearance.

That’s important because White’s preferred ADF force structure is built around the ability to sink ships, since “only ships can carry the vast amounts of material required for a major land campaign”. White says plainly that such an invasion remains highly unlikely, yet a substantial part of the ADF he proposes to build would be designed to sink the fleet transporting an invasion force.

This is where a little more detail about the enemy would have been welcome. China would need something approaching the size of the US Marine Corps, and a naval fleet to match, in order to really threaten the Australian landmass. Even then, it looks like an improbable way to attack Australia. Let’s assume for a moment that the ADF didn’t exist and nor did our alliance with America. Even in that defenceless state, why would an adversary choose to invade Australia rather than take a cheaper and less risky form of military action? If there is no plausible answer to that question, the job of defending Australia suddenly looks a little easier.

Still, it would be wise to give White the benefit of the doubt. When Australian politicians were obsessing about “Islamofascism”, he was warning about the implications of a rising China. And as they cling ever more closely to the US alliance, White is likely to be proven right about America’s demise as an Asian power, too.

No public intellectual has done more to lift the Australian gaze so that it faces squarely the challenges of the Asian century. Many still prefer to look away, and perhaps that’s what Australia will continue to do. In that event, How to Defend Australia will at least ensure that there is one thing we can never say: that we haven’t been told.

Previous Article
Temper our optimism: the message from the G20 Leaders’ Summit in Osaka
Next Article
More women – with more chances – is key to PNG’s democratic future

Voters should know if their next government will conduct freedom of navigation operations in contested waters.
Steve Bracks 13 Jan 2017 08:34

It is in Australia’s national interest to have an economically and politically stable neighbour to our near north.
Nic Maclellan 30 May 2022 11:30

As Canberra and Paris repair ties, presenting France as a “Pacific country” would undermine regional independence.