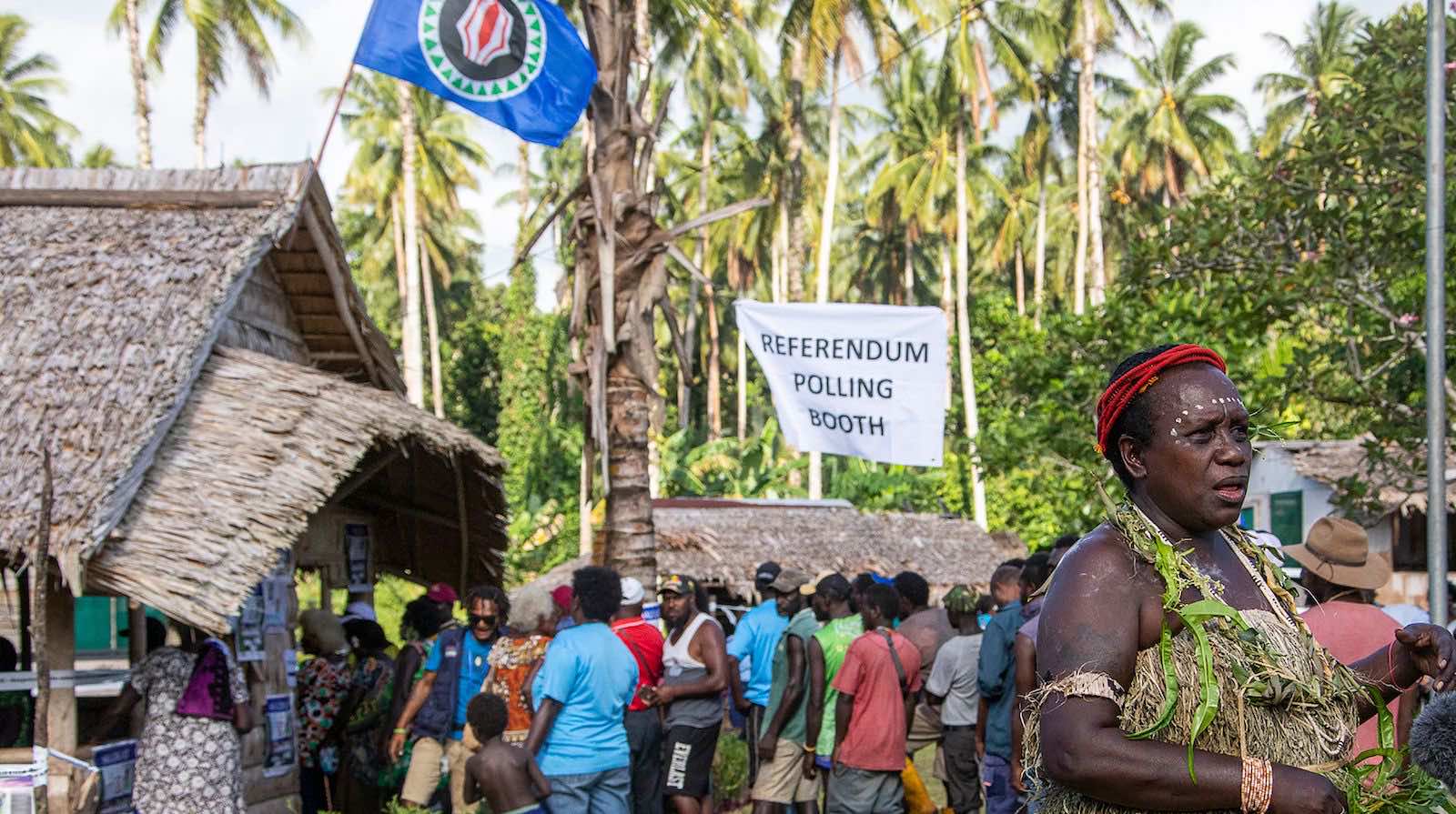 Polling in the capital Buka in November 2019. Across Bougainville 97.7 per cent of ballots supported independence (Ness Kerton/AFP via Getty Images)
Published 18 Jun 2021 06:00   0 Comments

The second constitutionally mandated post-referendum consultations between Papua New Guinea and Bougainville leaders about independence for Bougainville are being planned for late June 2021. Bougainville President Ishmael Toroama stated a goal of independence and full United Nations membership by the end of 2025 at the first consultation meeting, chaired by the UN, on 18–19 May. Together with significant initiatives taken by the Autonomous Bougainville Government (ABG) since elections last year, the statement of these goals signals a degree of commitment to independence that not so far fully understood outside Bougainville.

The PNG/ABG consultations are required following the referendum on Bougainville independence held late in 2019. There was a 97.7 per cent vote for independence, based on an 87 per cent turnout of enrolled voters, in turn based on a remarkably accurate roll. The referendum was adjudged “credible, free and fair” and “transparent and inclusive” by multiple independent international and national observers.

Unlike other conflicts resolved by agreements requiring a referendum on independence following a period of autonomy (notably Southern Sudan and New Caledonia), the Bougainville referendum outcome is not binding on PNG. Rather the Bougainville Peace Agreement and the PNG constitution leave the referendum outcome to be dealt with by three possible processes: first, PNG and ABG consultation; second, subject to consultation outcomes, tabling of the referendum results in the PNG Parliament for “ratification”, involving “final decision-making authority” of the parliament; third any “differences” being resolved per the “dispute resolution procedure” provided for in the PNG Constitution.

The first consultation was held almost 18 months after the referendum, much to the frustration of many Bougainvilleans. Reasons for delay in the first half of 2020 included ABG constitutional amendment processes and a PNG Supreme Court challenge (both unsuccessful) directed to giving then sitting ABG president John Momis a third term in office. Subsequently Covid-19, ABG general elections, and a late-2020 PNG political crisis were factors. But in addition, there was a lack of PNG focus and preparedness.

During the two day consultation, ABG President, Ishmael Toroama tabled a short “timeline” of main steps towards achieving independence in 2025. It included the end of 2022 for achieving not only transfer of all powers as yet to be transferred to the ABG from PNG under the autonomy arrangements, but also for achieving “self-government” for Bougainville. Self-government would involve establishing a “constituent assembly”, which by the end of 2024 would present “feedback on the draft Independent Bougainville Constitution”. The timeline steps were intended to set the agenda for the second consultation meeting.

All Bougainville public service departments are being challenged to become independence-ready.

Perhaps the most significant initiative illustrating the extent and depth of commitment to the goal of early independence is the ABG’s multi-faceted “independence-ready” program. Launched by a late 2020 resolution of the ABG House of Representatives, the program was inspired by the highly successful 2016 to 2019 ABG constituency-based “referendum-ready” program, which made significant contributions to local-level referendum-awareness. The independence-ready program has a similar constituency-based focus, involving locally focused independence awareness and encouragement of behaviour change in all 33 single member ABG constituencies, as well as the three “regional” constituencies, each represented by one woman and one “former combatant” and has so far been launched in 23 of the single member constituencies.

A major independence awareness focus involves the related issues of economic development and generating the sustainable Bougainville government revenue needed to support independence. The ABG accepts the conclusions of research undertaken for the PNG National Research Institute since 2018 by economist, Satish Chand, and others, indicating that an independent Bougainville is likely to need a budget two to three times the current ABG budget. The 2020 ABG budget was about K440 million (K151 million recurrent and K242 million capital expenditure). “Internal” revenue sources in 2020 (some under PNG control but nevertheless derived locally, such as goods and service tax and tuna licence revenues) were estimated at K30 million, about 16 per cent of the total budget.

The independence-ready program responds to the internal revenue deficit through awareness efforts encouraging all Bougainvilleans, including resource owners, to engage in income-earning activities (wage employment, cash crop production, or establishing businesses) with a view to contributing to economic growth, and also encouraging people to be tax payers, contributing to the proposed independent government’s revenue base.

Bougainville is also exploring what it should receive from PNG’s current share of revenue from a regionally administered Pacific tuna fishing licence scheme for fishing in Bougainville-associated waters, which Chand estimates “could range from K30 million to K130 million per year”. The President also talks of proposed new ABG supported business ventures, part funded by the ABG (US$19 million) and investors (US$100 million), creating 2,000 new jobs.

All Bougainville public service departments are being challenged to become independence-ready by moving promptly to develop ABG legislation to transfer as yet untransferred powers available to the ABG under the autonomy arrangements. The constitutional transfer process has been simplified by the ABG-initiated Sharp Agreement signed by both governments a few days before the first consultation meeting. The ABG sees this simplified transfer process as contributing to the independence-ready process.

Finally, recognising the difficulties likely to be involved in gaining international community recognition as a new state and gain UN membership, the ABG cabinet has recently established a Ministerial Committee on International Relations that will be “cultivating international support” for Bougainville independence.

The aim of highlighting here important aspects of the ABG’s commitment to and plans for achieving independence is not to raise questions about how realistic they are being, but rather to indicate the depth of commitment evident in the ABG position and its related post-referendum initiatives. It is clearly going to be difficult for PNG to persuade the Bougainville leaders to accept anything short of full independence. Neighbouring countries need to be aware of the direction that the consultations are taking, and the difficulties likely to arise in reaching compromises in the initial consultation process, and perhaps beyond.