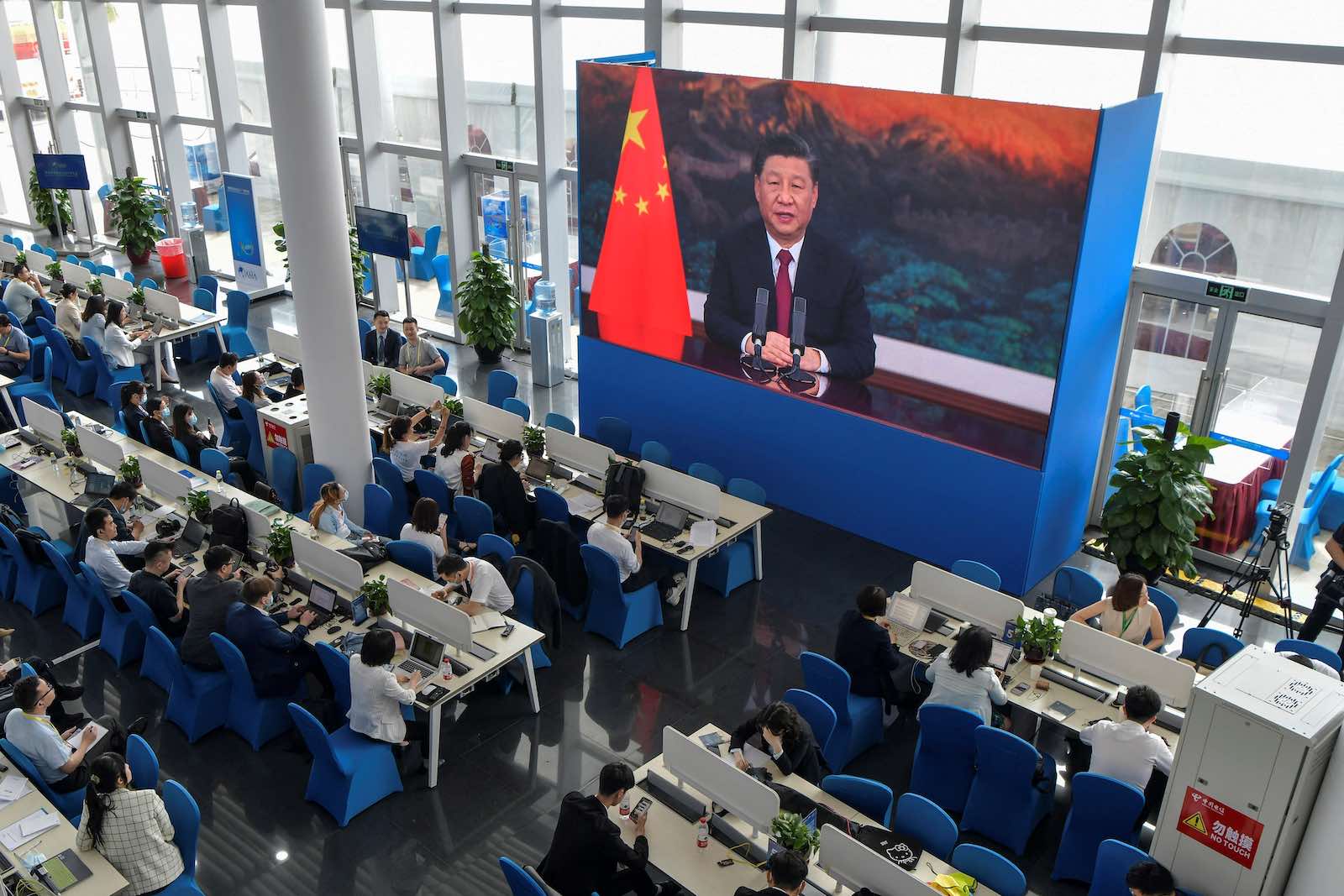 Journalists watch on screen as China’s President Xi Jinping delivers a speech during the opening of the Boao Forum for Asia on 20 April (STR/AFP via Getty Images)
Published 22 Apr 2021 13:00   2 Comments       Follow @NickBisley

As China’s economic revival has given the country a global weight commensurate with its demographic scale, the choices it makes are crucial for regional and indeed global prosperity and peace. After the 1997 Asian financial crisis, for instance, the People’s Republic of China opted not to devalue its currency to take advantage of the weaknesses of those affected, buying significant goodwill among its neighbours. Yet its more recent decision to create nearly 3000 acres of reclaimed land in the disputed waters of the South China Sea and place military installations on newly established “islands” has created a highly charged strategic dynamic in one of the world’s most crucial waterways. What China does matters.

For some time, its actions in the region have made clear that the PRC is no longer content with the regional order that was established by the Sino-American rapprochement. And at the global level, its unease with the liberal underpinnings of the international order, particularly those developments aimed at promoting individual rights and diluting national sovereignty, has been palpable. What China wants has thus become a question of fundamental importance most immediately to Asia, but also to the world more broadly.

Xi makes clear that he sees connectivity, infrastructure and standards, and China’s ability to deliver on these global public goods, at the heart of its global mission.

For some, the assertiveness of Xi Jinping foreshadows a China that aims to dominate the world, while others see PRC ambition as seeking to create tianxia for the 21st century – that is, the hierarchical order atop which it sat before the 19th century, best known in the West for the tributary rituals that supplicant states had to perform. Yet others argue that China’s international ambition is to make the world safe for authoritarianism.

Unlike the clear statements of order building set out in the League of Nations or United Nations and Bretton Woods systems, the PRC has hitherto been coy about just what it wants to achieve. Although there have been some indications of long term ambition, most obviously in Xi’s report to the 19th Party Congress in 2017, in which he stated that China intended by 2049 to be “a global leader in terms of composite national strength and international influence”. But more broadly, scholars and analysts have had to infer the ambition of the Chinese Communist Party from myriad sources. In part, this reflects the inherent opacity of the Chinese political system, as well as diverging views among party elites. Also, CCP elites did not expect to be in the position they are in at this point in time. The 2008 global financial crisis accelerated the country’s relative standing by at least ten years, and the disasters of the Trump presidency and the Covid-19 pandemic have further moved things along.

Whereas in 2008 the PRC felt uncertain about being thrust into global leadership and uneasy about the expectations that went with that standing, today the unexpected acceleration of leadership is met with the confidence of Marxists who believes that history is, scientifically, on their side.

And it is this confidence that has prompted perhaps the clearest statement to date about what it is that the PRC wants to do to the international order in Xi Jinping’s keynote address to this year’s Boao Forum. Sensing the fluidity of the international environment and America’s relative weakness, Beijing feels it can begin to establish an international context more in line with its interests.

Unsurprisingly, it is framed in the language that has anchored PRC foreign policy for many years, “win-win” approaches to international issues and a reiteration that the PRC is committed to peace; these should be treated as the rhetorical stock in trade that they are. But there are a number of major themes that are notable.

It is remarkably status quo in terms of its attitude to the core institutional components of the international order. The UN, the World Trade Organisation, multilateralism and even globalisation are set out as central to its view of the world. While it is not explicitly stated, the PRC takes what might be described as a kind of UN Charter originalism as its ideal of the organisation. Its preference is for the organisation that was created in in the 1940s to defend state sovereignty, and not the expansive rights-focused entity that it has since become.

Xi makes clear that he sees connectivity, infrastructure and standards, and China’s ability to deliver on these global public goods, at the heart of its global mission. The PRC does not want to craft a baroque new institutional architecture of global governance, rather it wants to build the physical and cyber sinews connecting economies and societies in the 21st century.

Of course, there are some elements that could lead analysts to speculate if the irony is one of the lesser-known features of Xi Jinping Thought, such as these sentences:

In state-to-state relations, the principles of equality, mutual respect and mutual trust must be put front and centre. Bossing others around or meddling in others’ internal affairs would not get one any support.

Realists remind us that we should not put too much stock in what states say, particularly great powers – their actions are what counts. Notwithstanding this, for a country that has hitherto been very cautious about its global ambitions, saying anything about them at all is notable. And that the PRC has articulated what is ultimately a fairly status quo orientation is both surprising and reassuring.

Xi may style himself as the next Great Helmsman, but in his view of international order as set out at Boao Forum, he is a renovator, not a revolutionary.