The environmental impact of China’s dam building upstream is undeniable. The silence from some quarters is surprising. 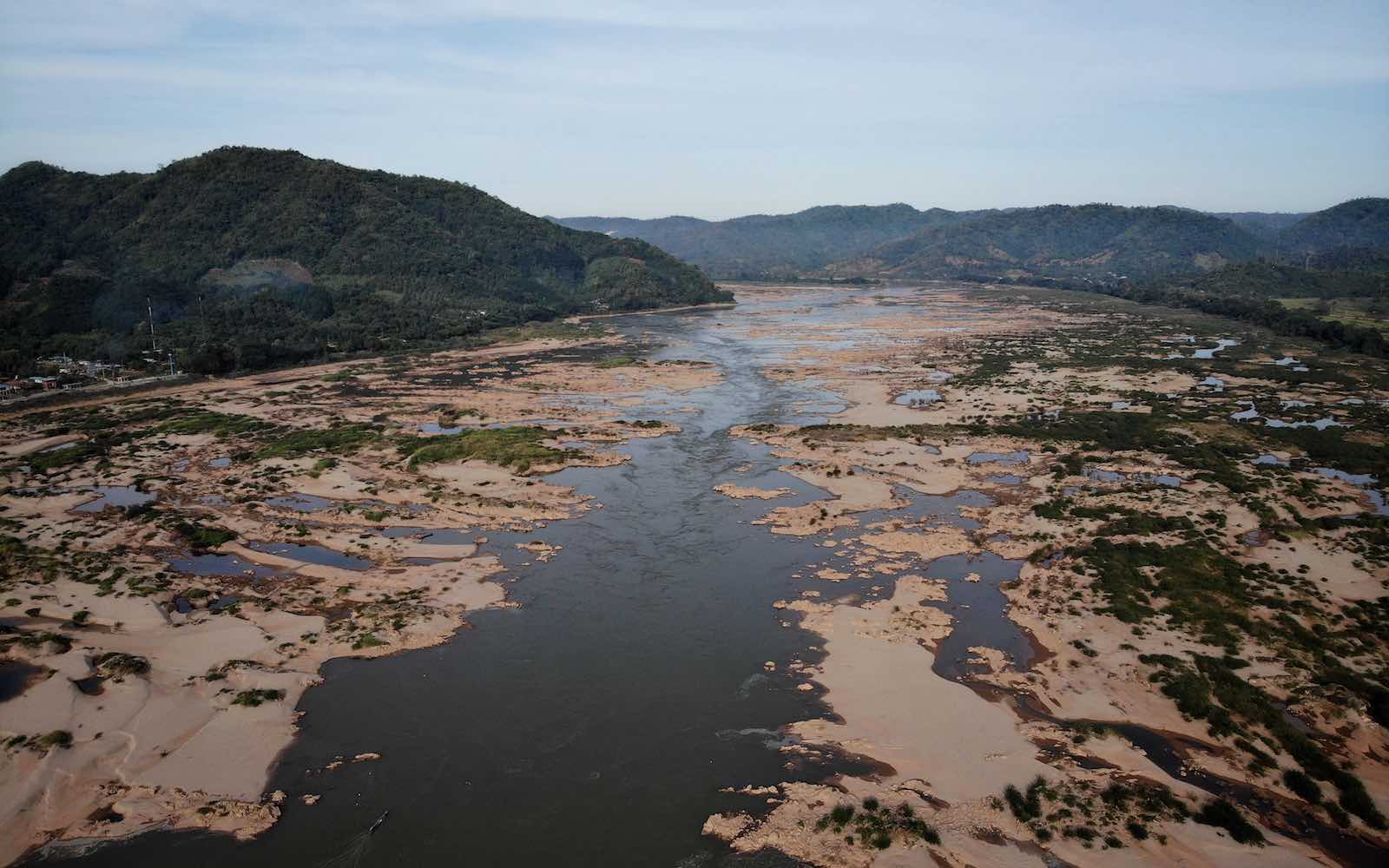 Record low levels on the Mekong River dividing the north-eastern Thai province of Loei, at left, with the Laos side seen at right, October 2019 (Lillian Suwanrumpha/AFP via Getty Images)
Published 11 Aug 2020 06:00   0 Comments

The latest reports from the Lower Mekong Basin are cause for growing concern that another period of drought will succeed that of 2019, affecting Laos, Thailand, Cambodia and Vietnam. Expected rainfall from late May through June and July has not arrived, and the level of water flowing in the river is so low that the “normal” reversal of the Tonle Sap tributary at Phnom Penh, resulting in its flowing back up into the Great Lake, has not occurred. In the Great Lake itself, the low levels of water have had a negative impact on fish catches, with fishers reporting some of the lowest catches in years.

The prospect of another crippling drought comes with the publication of evidence that the 2019 drought took place while China was holding back water in some of its dams on the Mekong River. The claim has been highlighted in major contributions from the Stimson Center in Washington, most importantly in new evidence published in April and in a contribution to Foreign Policy by Brian Eyler, Director of the Stimson Center’s Southeast Asia Program (and whose book The Last Days of the Mighty Mekong I reviewed for the Mekong Review).

Over the past three decades, China’s actions and policies in relation to the Mekong and what happens in the Lower Mekong Basin have been marked by consistent self-interest.

The detailed evidence behind the reports is based on imagery collected by Eyes on Earth, an organisation using satellite imagery to monitor climate developments. The findings are deeply disturbing, coming as they do against a succession of droughts in the past two decades that have wreaked havoc throughout the Lower Mekong Basin. Crops have failed on several occasions, and there have been very particular worries in the Mekong delta, where regional authorities have called for a declaration of emergency because of drought conditions earlier this year. This disturbing situation has been exacerbated by the reduction in the flow of sediment down the river, sediment retained by China’s 11 Mekong dams. And there is consistent, if anecdotal, evidence that fish stocks have been declining in circumstances in which fish provides the vital contribution of animal protein to the diet of populations in the region.

The essential claims made in the Stimson reports are as follows:

These conclusions are made possible by the Eyes on Earth data, which permits accurate estimation of what is happening within China and in relation to its 11 dams on the upper reaches of the Mekong. They call into question the nature of China’s fundamental attitudes in relation to the river.

As the Stimson report observes, China regards the Mekong as “a sovereign resource rather than a shared resource”. This attitude is reflected in the fact that China has never acceded to conventions that would compromise its right to maintain absolute control of the Mekong within its territory.

It is hard not to see China’s actions in relation to the Mekong as a reflection of broader Chinese foreign policy values. And while Stimson suggests that these new revelations offer the opportunity for “cooperative engagement [that] could transform China’s dams into a solution for the next time a major drought hits the region”, my own view is more pessimistic. Over the past three decades, China’s actions and policies in relation to the Mekong and what happens in the Lower Mekong Basin have been marked by consistent self-interest. This applies equally to its failure to join the Mekong River Commission, to the formation of an alternative body to deal with Mekong matters (Lancang-Mekong Cooperation), and to the policies it has pursued in seeking to favour Chinese commerce in its clearance operations along the Mekong’s course to promote riverine trade. That it is now revealed to have hoarded water at a time of crippling drought in its neighbours gives little assurance of its improved behaviour in the future.

Reactions to the reports have ranged from predictable to surprising. As would be expected, civil society groups seized on the Stimson revelations to call for action to change Chinese policies in the future. More surprising has been the quick reaction of the Mekong River Commission to call into question the validity of data released by Eyes on Earth, basically arguing that there is need for further study before any conclusions are reached. This seem an odd reaction from a body dedicated to the Mekong’s wellbeing.

It is not surprising that Global Times has reported a Chinese study suggesting that the dams China has built on the Mekong play a vital role during the wet season, as opposed to what occurs before that season is in progress.

This study has been answered in detail by Eyler in a recent Bangkok Post op-ed.

Finally, the silence from the governments of the Lower Mekong Basin countries is surprising. Perhaps Laos and Cambodia are now so aligned with China that their voices are stilled, but it would seem reasonable to expect that Vietnam and Thailand might join in the chorus of concern that has emanated from civil society groups.