The US hasn’t got much to show a year after pulling out of the nuclear deal, but Iran’s patience is also running out. 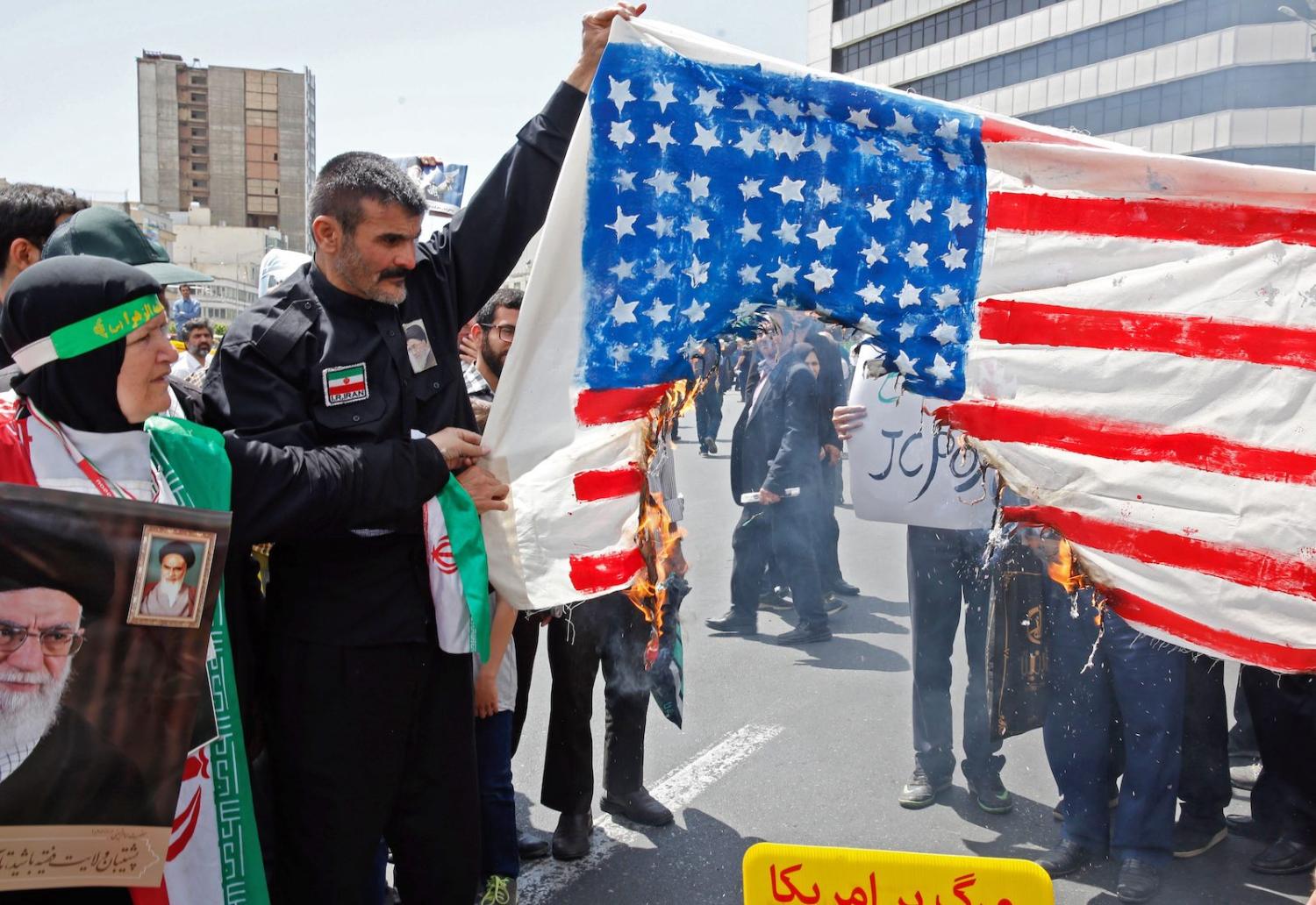 Demonstrators burn a makeshift US flag in Tehran this month (Photo: STR via Getty)
Published 21 May 2019     Follow @RodgerShanahan

Washington’s attempts to isolate Iran economically and politically rely largely on whether it can get Tehran to opt out of the 2015 nuclear deal.

As long as the Trump administration is the only signatory to withdraw from what is known formally as the Joint Comprehensive Plan of Action (JCPOA), an agreement that all other parties abide by, Tehran can claim the moral high ground and attempt to garner support from the other signatories.

Having John Bolton as the lead salesman obviously doesn’t help, given his exuberant support for the “invade Iraq” and now “bomb Iran” campaigns.

But the recent increase in tensions between the US and Iran is reflective of the fact that a year after putting in place a campaign of economic sanctions, the Trump administration has little to show for its policy. Sure, the Iranian economy is once again hurting and there is evidence that Hezbollah is having trouble paying some of its members, but little indication that the US policy is resulting in a change in Iran’s strategic behaviour.

There are, of course, conservative elements in Tehran that would willingly ditch the agreement. Until now wiser heads have prevailed. But with the cessation of waivers for oil imports and the sanctioning of the entire Iranian Revolutionary Guard Corps, the limits of Iranian strategic patience seem to have been reached.

Tehran has now changed its approach to the issue, announcing that it will not observe the limits on its heavy water and low enriched uranium stockpiles, and that the Arak heavy water reactor, located about 250 kilometres west of Tehran, will be upgraded. It also gave the other JCPOA partners 60 days in which to reach an agreement that would provide sanctions relief for Iran.

That appears unlikely to happen. We will then pass into the next phase of this diplomatic brinkmanship from 7 July. Exactly how far Tehran is able to stretch the agreement’s boundaries without being accusing of being in breach of the deal will become apparent shortly after, but Tehran is not in a strong position to be issuing ultimatums to Europe.

Even with Washington’s increasing stringent economic measures being directed towards Iran, there are reasons for Iran not to be seen to be the one to kill the deal off. Only last week Vladimir Putin stated the obvious when he observed that: “as soon as Iran takes its first reciprocal steps and says that it is leaving, everyone will forget by tomorrow that the US was the initiator of this collapse. Iran will be held responsible, and the global public opinion will be intentionally changed in this direction.”

Yet the European co-signatories to the nuclear deal may not be in any position to help, and Iran may be coming to the conclusion that Europe’s displeasure with Washington’s unilateral actions amounts to little more than rhetoric. The financial instrument, or special purpose vehicle, known as Instex, that European countries comprised to allow them to trade with Iran and circumvent US sanctions appears dead in the water, and Washington is shooting at it to make sure that it doesn’t re-surface.

With this as the background, it appears that Washington has opened another front. The US is heavily engaged in an information operations campaign to further portray Tehran as orchestrating instability in the region by directing its proxies to attack American interests.  What are in reality normal US military deployments with some additional force elements have been announced by the National Security Adviser rather than the Pentagon, and leaks of operational reviews of standing plans in Washington have appeared, designed to increase military pressure without actually sending any extra forces.

Exactly what has prompted this recent uptick in US bellicosity is difficult to know because of the paucity of information being shared, other than some claims of intelligence pointing to a specific threat from Iran against US forces. There is nothing necessarily wrong with not publicly sharing such information – governments need to protect the way in which they obtain intelligence even more then the intelligence itself. But accepting the conclusions drawn by the White House requires trust in those peddling those conclusions. And this is where the problem lies.

Ever since the egregious errors (and potentially cherry-picked information) made by the Bush administration in justifying the ill-fated invasion of Iraq in 2003, the public is quite rightly sceptical of administration officials’ interpretation of intelligence, especially without a broad consensus among allied states. Having John Bolton as the lead salesman obviously doesn’t help, given his exuberant support for the “invade Iraq” and now “bomb Iran” campaigns.

Whatever the intelligence is, it would appear to be more than scuttlebutt but quite geographically specific and time limited. The US ordered the partial withdrawal of staff from its Baghdad embassy and Erbil consulate. And the Germans and Dutch ordered a temporary halt to their training mission in Iraq, although it now appears that the Germans will be resuming. There were no reports about nations engaged in Iraq drawing the same conclusions as the US media about the potential for war, although Exxon has moved staff from the west of Basra to Dubai.

Meanwhile in Washington there is also less than universal support for the administration’s conclusions regarding the intelligence. Some Democrats have disputed the conclusions drawn from the intelligence, while others have suggested Iran’s actions are in response to US policy and not driving US policy responses.

Despite Donald Trump’s twitching Twitter finger, he has proven to be much more cautious in committing US forces to military action in the Middle East. Indeed, his rather strange offer to Tehran to call him so they can sit down and make a better deal than Obama was able to seems Trump’s ultimate aim. The posturing is in all likelihood a means to this end.

But with Houthis in Yemen targeting Saudi oil pipelines in drone attacks and four vessels attacked off the coast of the United Arab Emirates, pro-Iranian groups are sending a message that Iran is a long way away from being forced to the re-negotiating table. The problem is that while both Washington and Tehran have signalled there are limits to this posturing, the ideologues in both capitals may not always be on the same page as their political masters.

Both sides need to re-calibrate their language to reduce tensions. The next 60 days should be used by the Europeans to find a way to keep Iran within the JCPOA. At this stage of proceedings, achieving that may be impossible, and tensions may well increase further after 7 July.

If Merkel believes she can employ soft power, diplomacy and compromise to reverse Erdogan’s tide, she is sadly mistaken.
Greg Earl 1 Jul 2021 12:00