From the South China Sea to the Rohingya crisis, Saifuddin Abdullah speaks to Lowy’s Ben Bland on Asia’s big challenges. 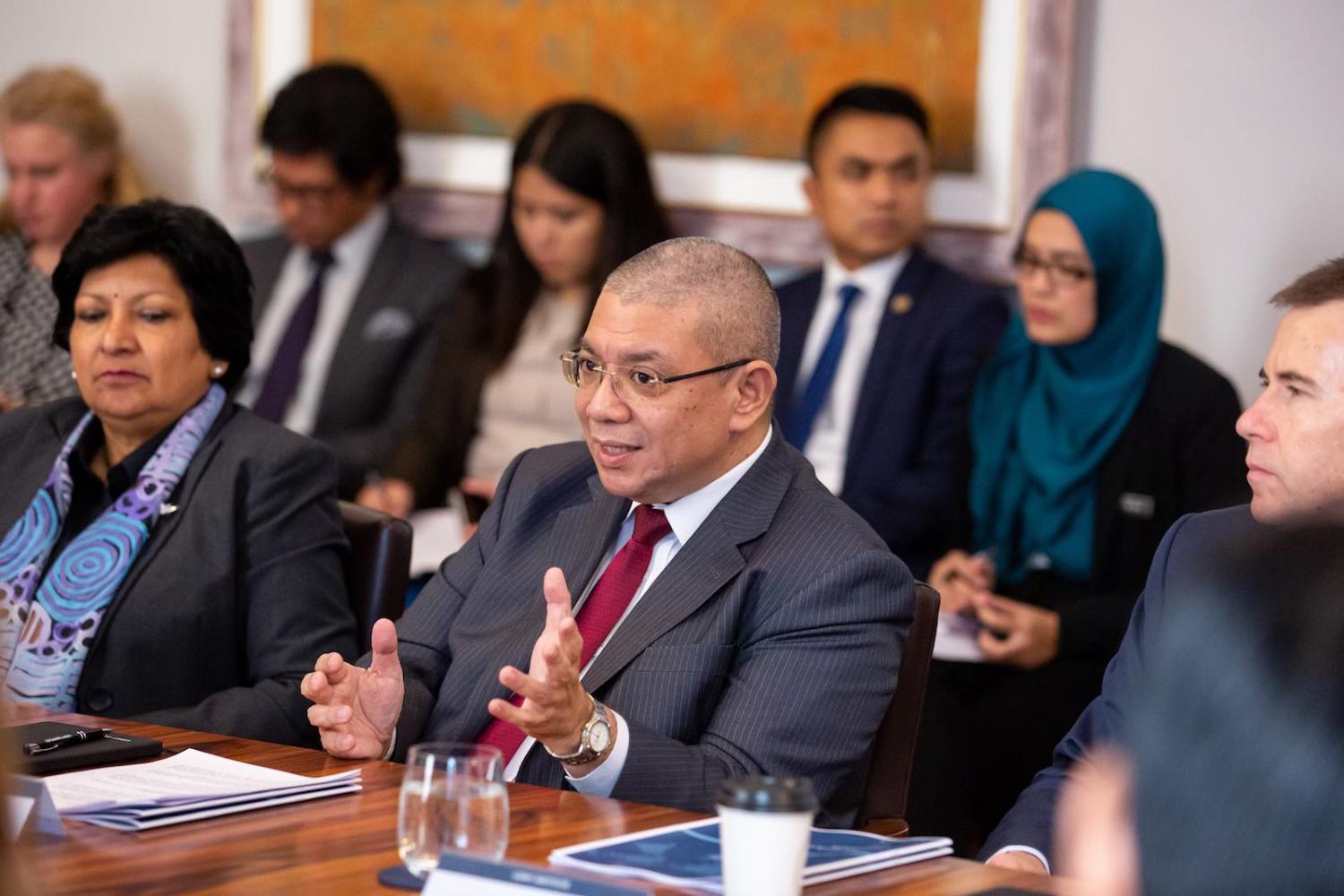 Since Malaysia’s remarkable election last year delivered a victory to the Pakatan Harapan coalition, Malaysia’s Foreign Minister Saifuddin Abdullah has been struggling to navigate a region increasingly defined by great power competition, whether in trade or the South China Sea. On a trip to Sydney last week, he sat down with Ben Bland, the Director of the Southeast Asia Project at the Lowy Institute, to discuss Malaysia’s foreign policy, from the impact of US–China tensions to the future of the Association of Southeast Asian Nations, and from the Rohingya crisis to the meaning of the Indo-Pacific.

This is an edited transcript of their conversation.

Is Malaysia getting caught in the intensifying US–China rivalry?

We are very sure that we do not want to act in any way that is pro whichever country or superpower. But we are also very clear that there are lots of things we can learn from China in as far as their technology advancement is concerned. It so happens that Huawei is one of the main companies involved in many of these new technologies, be it robotics or artificial intelligence.

But, of course, when we say we want to learn from China, we are wary of the fact that China, the government in Beijing, uses this kind of technology sometimes in ways that we are very sure we are not going to use it. I don’t think we want to do facial recognition by having cameras placed all over the country.

Are we really entering a new era of great power contestation?

We have been dealing with China for thousands of years. By saying that I’m not saying Malaysia is well equipped. We know that China is a superpower. And we have the US. It’s not just [about] trade between the two. It’s also security, especially the South China Sea. And again, we have to navigate between the two powers.

It so happens that both superpowers are there in the South China Sea without invitation from any of the ASEAN member states.

China is very active in the South China Sea. We have been telling our friends in Beijing that as much as we respect their rights for free passage and flight according to the United Nations Convention on the Law of the Sea … that too much activity is not going to be helpful. But, at the same time, there is the US presence also in the South China Sea, and it so happens that both superpowers are there without invitation from any of the ASEAN member states.

I’m not saying that we’re happy because both of them are there. [But] the scenario would be very different if only one of them were there. So, maintaining the balance is [number] one. Number two is trying to impress upon both the US and China that as much as we are not going to stop them from being there, we are also not very pleased that both of them are too active in the region.

Given the divisions in many multilateral institutions, does it make sense to promote more trilateral or “minilateral” cooperation in the region?

We have to be very practical in the things we do in foreign affairs. On the one hand, we need to strengthen whatever platform is already there. ASEAN is premium for Malaysia. We want to do as much as we can through ASEAN.

But having said that, we are also looking at partners in specific activities or projects and that’s why we’re talking to Turkey and Pakistan [about how to combat Islamophobia]. I don’t like to use the term we normally use in foreign affairs: “like-minded countries”. Then it becomes very formal. When people ask me what is this Malaysia, Turkey, Pakistan thing? [I say] we’re strengthening our bilateral ties among the three.

In a way, it is also done out of frustration that some already existing platforms don’t seem to be doing what they should be doing. In particular, the Organisation of Islamic Cooperation. Many member states are not happy with the way the OIC is doing its work. We are not going to ditch OIC – it remains one of the most important platforms. We need to continuously try to improve the way OIC does its thing.

How can you streamline ASEAN to make it more effective and responsive?

ASEAN lacks leadership. The rotational system [of country chairmanship] to my mind is not going to improve the question of leadership. But I think it has been a very successful regional grouping. It started in 1967 out of fear of communism, and then it grew to become ten and hopefully we can grow to become 11 with the inclusion of Timor-Leste. The challenge now is to strengthen the economic pillar of the ASEAN project.

When will Timor-Leste be allowed to join ASEAN?

Malaysia has stated from day one that we want Timor-Leste to be in, but I think there are one or two member states who think that we need to ensure that Timor-Leste is properly prepared to be a member, and that is why the fact-finding mission [on Timor-Leste’s readiness to join ASEAN] was established.

We don’t know what’s the end game and when. So it is of utmost importance that we look at the education of the Rohingya children.

They have completed part of their work and I’m really hoping that we can have Timor-Leste as a member as quickly as possible. They have expressed that they’re quite frustrated that they have waited for eight years.

ASEAN launched its “Outlook on the Indo-Pacific” in June but the “Indo-Pacific” isn’t part of Malaysia’s foreign policy lexicon. Do you think it’s a useful concept?

ASEAN is a region that is so unique. Some countries in certain parts of ASEAN don’t really think Indo-Pacific is important. But because we understand the consensus spirit and also the collegiality of ASEAN, and ASEAN’s centrality in doing things, we altogether supported the idea that was mooted by Indonesia.

Credit must be given to the Indonesian government. But we were very careful in the way we crafted our position, hence the title, the “ASEAN Outlook”. It’s like saying Indo-Pacific is important but for ASEAN it is probably not as important as [for] other people. Also, because we take note of the fact that there are at least two opposing views of the Indo-Pacific, we are trying to be very fair in way we look at the Indo-Pacific. We didn’t try to give it a meaning but tried to give a response to what was already there. 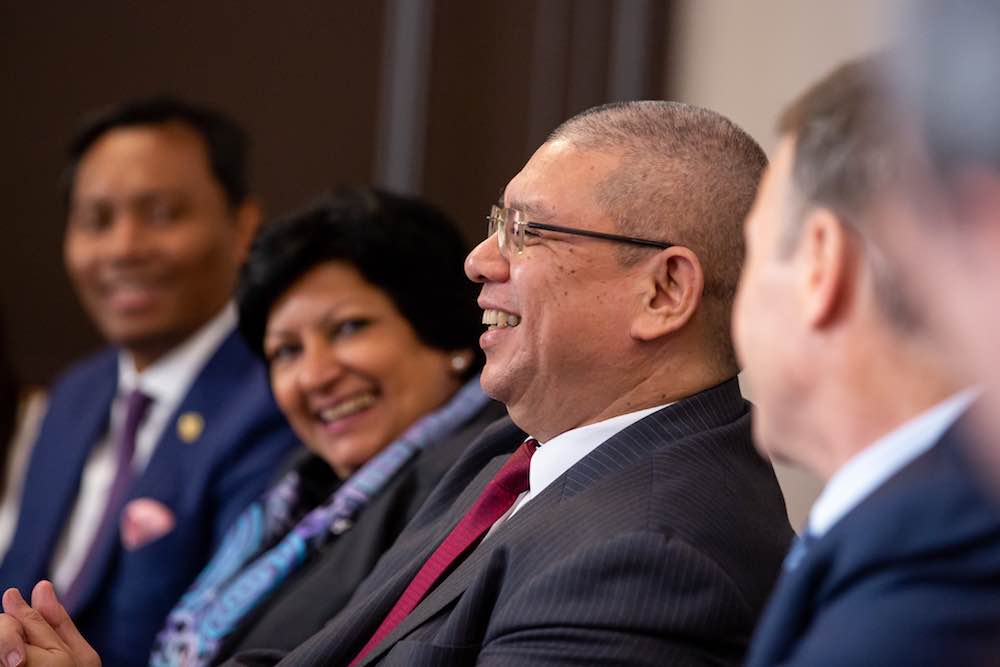 You’ve previously called for justice for the perpetrators of the genocide of the Rohingya in Myanmar. Do you support Gambia bringing a case against Myanmar at the International Court of Justice?

Indirectly, we are supporting the Gambia initiative, because we are a member of the OIC, and this is a decision that was made through the OIC. The second thing is, we have not decided on our actual position, because the process will require time and resources. I know that Gambia cannot do it alone, in terms of resources. The OIC secretariat will have to decide as to how member countries play a role, and by that time Malaysia will have to have a proper position on it.

What will happen to the Rohingya refugees in Bangladesh? Is there a risk that the world and Myanmar will wash their hands of the problem?

What we don’t want to happen is for the world to forget them. The least we can do is ensure the issue will always be on the agenda in all of the relevant international forums, and we will be steadfast in making sure we continuously speak on this subject.

Number two is … the education of the children. We don’t know what’s the end game and when. So it is of utmost importance that we look at the education of the Rohingya children. We have about 150,000 Rohingya in Malaysia now – some are with the UNHCR [refugee identity] card, some are without. The Malaysian government cannot afford to absorb the children in our schools; we don’t have enough schools ourselves or enough teachers. What we are doing is we encourage our civil society organisations to organise classes for them.

There are 27 references to human rights in your new foreign policy framework. It’s obviously something you take seriously. But how lonely is it pursuing human rights in Southeast Asia these days?

It can be quite lonely. But at least we have the ASEAN Intergovernmental Commission on Human Rights and there are members of AICHR who are very active. And there is a vibrant civil society community. In some member states, they enjoy better freedom than others, and we are trying to motivate them … and facilitate wherever possible.

Malaysia recently came under pressure from Cambodia to deny entry to Mu Sochua, the Cambodian opposition activist. After she was detained initially at the airport, you allowed her to enter and stay for a few days. How do you weigh the ASEAN principle of non-interference in others’ internal affairs against the human rights you want to promote?

We try to impress upon our friends, our member states, or people from outside ASEAN that Malaysia wants to uphold certain principles. Not that we can always do it well. For example, we have been criticised that we have not said anything on the Uighur [issue], compared to what we have been saying about Palestine, the Rohingya, and Kashmir.

It’s not something that we can easily answer, and even if we try to answer, not everyone will be receptive of our answer. But what I can say is we try as much as possible to implement it at home and to champion it in international forums. There is a Malay saying: “ukur baju di badan sendiri” [Literally: measure your clothes to fit your own body, or shape your ambitions in line with your capabilities]

It is possible to sketch what’s happening in Asia and what it means for Australia in terms which are not as scary politically or diplomatically as our ministers seem to assume. Here is a modest drafting suggestion.
Allan Gyngell, Sam Roggeveen 31 May 2017 08:33