The French strong-points at Dien Bien Phu in north-west Vietnam are falling again. Not, as in 1954, to Viet-Minh attacks, but rather to the bulldozers of progress. 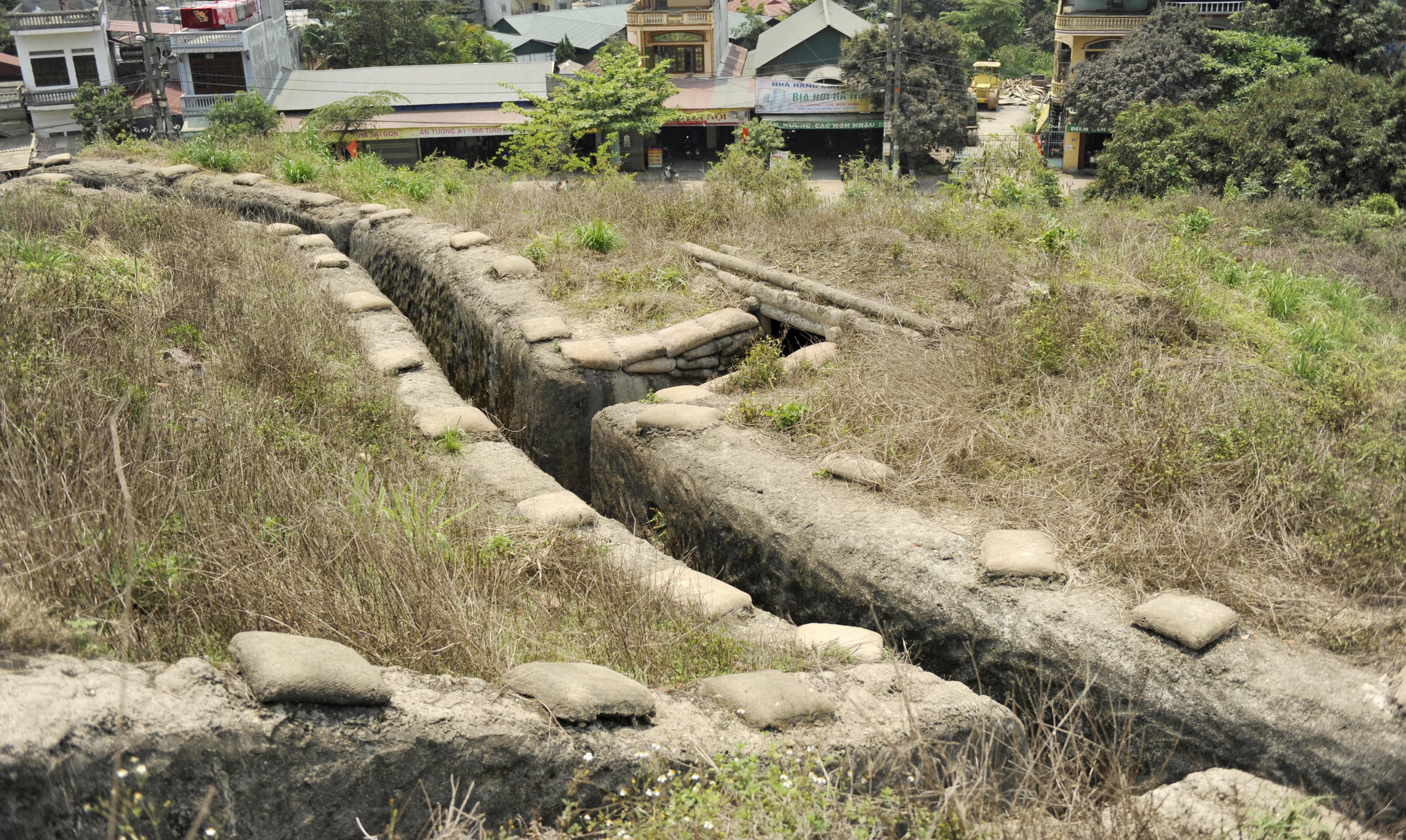 The French strong-points at Dien Bien Phu in northwest Vietnam are falling again. Not, as in 1954, to Viet-Minh attacks, but rather to the bulldozers of progress.

The entrenched ‘air-land’ camp of Dien Bien Phu was established by parachute drop in November 1953. The flat river-valley floor, perhaps five kilometers wide, is overlooked on all sides by mountain ranges. Small hillocks, typically 50 to 100 metres high, pepper the valley floor. By March of 1954 the central base camp and the airfield were protected by a ring of strong-points on some of these hillocks. These were designated with women’s names: Beatrice, Gabrielle and Anne-Marie protected the northern end of the airfield.

Today Beatrice, a group of interconnected hillocks, is a battle-buffs playground, with trenches and block-houses reconstructed and steps to help visitors up the forbiddingly steep slopes. But progress is catching up with the battlefield. In 1954 this was farmland with isolated small hamlets. Today, Dien Bien Phu is a large city, with ten-story buildings and endless shopping streets. 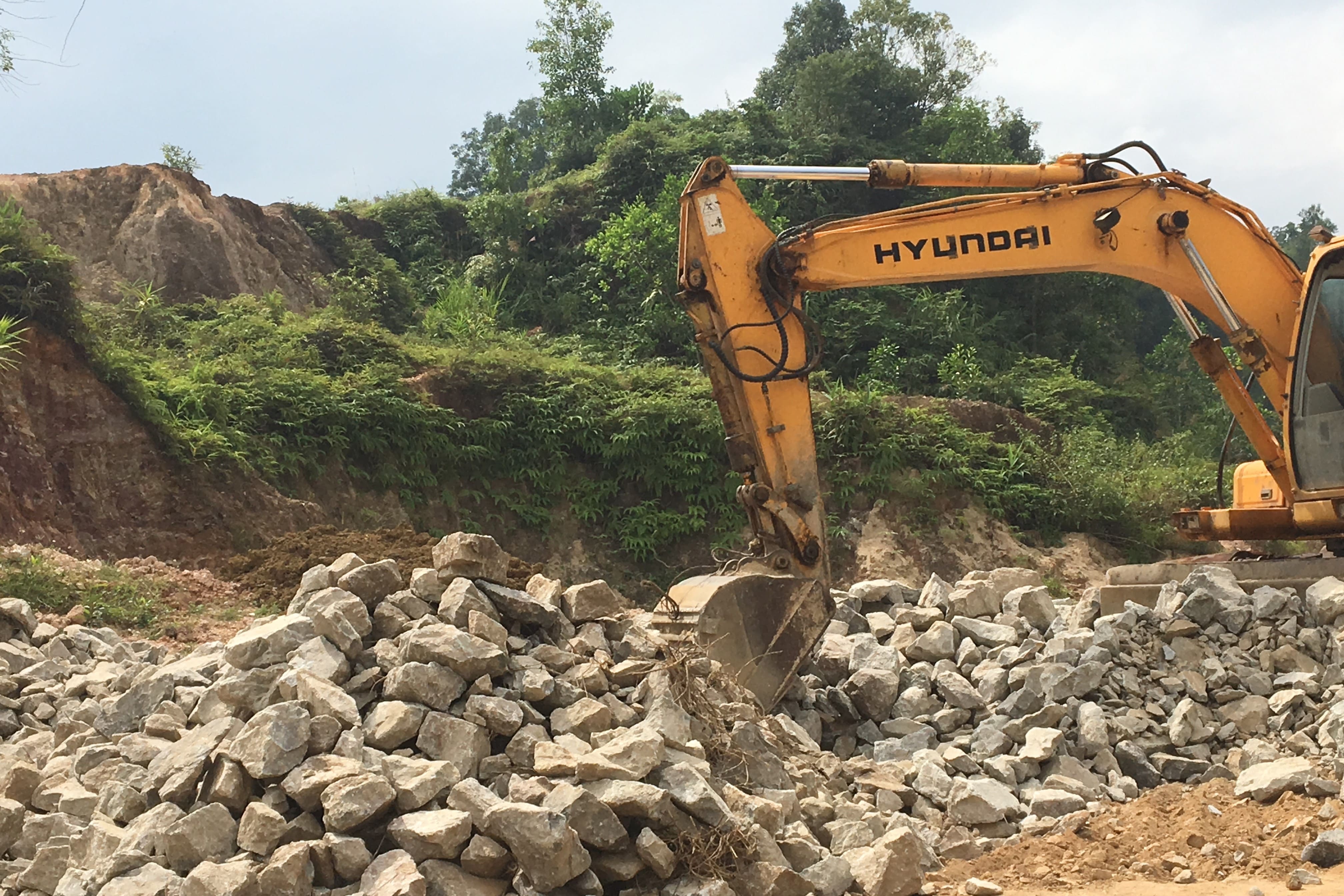 Part of Beatrice (‘B3’ hillock) seems to be in the process of being flattened for a factory, and one side of Anne-Marie has been carved away in a manner that the Viet-Minh sappers could only have dreamed of (see above). The strong-points that stood in the way of the enlargement of the airfield have long gone. Gabrielle was never very high, so perhaps its current low posture is just natural attrition.

Make no mistake, however; the battle is still imprinted on the small city that has grown up here since 1954. Dominique 1, situated at a busy street intersection, is waiting for anyone ready to tackle its 165 steep steps (or, cheating, to drive up the side) with a huge victory memorial on top. The reconstructed bunker of French commander General de Castries is crowded with Vietnamese tourists celebrating the victory (see below). The Bailey bridge which connected the two sides of the camp astride the Nam Yum river is fragile, but still there. 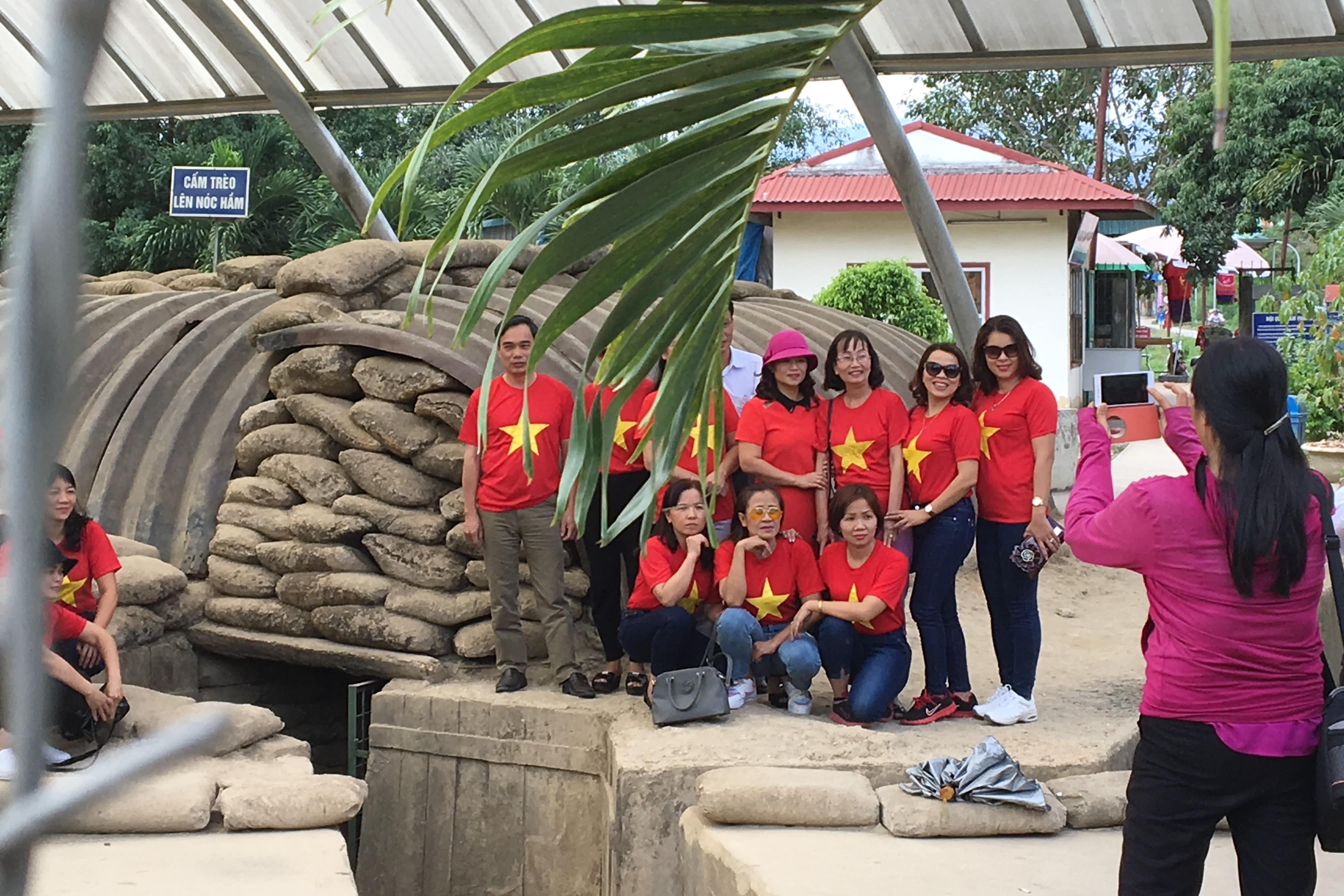 Above all, Eliane 2, the commanding hill critical to the defence of the camp, still has the reconstructed trenches and bunkers and the gaping hole where Viet-Minh sappers tunneled 45 metres under the hill and blew up a ton of explosives (again, reconstructed). As well, near the summit, is one of the ten Chaffee ‘light’ tanks the French use (still nearly 20 tons; five or six of them are scattered around the battle sites in various stages of dismantlement). When Eliane 2 fell on the night of 6 May 1954, the battle was over. Next day the firing faded away (white flags may or may not have been raised) and de Castries and his men and women were taken prisoner, many of them to die (perhaps more than half) in the relatively short period before release as part of the Geneva Accords in June 1954 which brought the French colonial experience in Indochina to an end.

So many amazing stories come out of this searing experience. One of the most popular, however, needs correction or at least a heavy dose of scepticism. The usual view is that the strongpoints were named after de Castries former mistresses. But once you note the alphabetical progression – ‘Anne-Marie’, ‘Beatrice’, ‘Claudine’, ‘Dominique’… and so on right down to ‘Lili’ – the story is either an amusing myth or de Castries chose his mistresses in a curious way.

This battle marks the end of the French Indochina war and gives many forebodings of the ‘American War’ to come. In its structure it was in many ways a throwback to the Great War. With its barbed wire entrenchments, and the pivotal role of artillery, machine guns and tanks, it was a miniature version (in duration, scale and losses) of the Western Front. The parts that have been preserved are, with the exception of Dominique 1, Eliane 2 and de Castries’ bunker, devoid of visitors. Perhaps it is inevitable that the lesser-visited strongpoints will be erased by progress. Nevertheless it leaves a pang of regret that many of those who died here will, without recognition, be engulfed by urban expansion. There is no French cemetery here; only a small privately-initiated memorial. And the Viet-Minh cemeteries, extensive though they are, can’t account for more than a fraction of the dead.