Australia should not sign the ban treaty. But the need for nuclear disarmament has not diminished.

This year’s Nobel Peace Prize has been awarded to the International Campaign to Abolish Nuclear Weapons (ICAN) for:

Its work to draw attention to the catastrophic humanitarian consequences of any use of nuclear weapons and for its ground-breaking efforts to achieve a treaty-based prohibition of such weapons.

ICAN was a major influence behind the negotiation of the Treaty on the Prohibition of Nuclear Weapons, which was opened for signature at the UN in New York on 20 September. The Nobel award ceremony will take place this Sunday in Oslo.

The ban treaty aims to prohibit all aspects of nuclear weapons: development, production and testing; acquisition, possession and stockpiling; transfer; stationing and deployment; and use or threat of use. This is the first treaty to seek a universal prohibition on nuclear weapons, though there are several nuclear weapon-free zone treaties that apply similar prohibitions. The Nuclear Non-Proliferation Treaty (NPT) also prohibits non-nuclear-weapon states from developing or acquiring nuclear weapons.

Although the NPT does not expressly provide for the elimination of nuclear weapons, all parties are required to ‘pursue negotiations in good faith on effective measures relating to cessation of the nuclear arms race at an early date and to nuclear disarmament’. In its landmark 1996 advisory opinion on the legality of use or threat of use of nuclear weapons, the International Court of Justice held this NPT obligation meant not only to pursue negotiations but to bring them to a successful conclusion, resulting in nuclear disarmament under strict and effective international control. In this, there are two major problems:

Not only are no nuclear disarmament negotiations in progress or planned, today nuclear arsenals are being upgraded. Military planners are considering new uses for nuclear weapons, scenarios for ‘limited’ nuclear wars have re-emerged and political leaders are even threatening the use of nuclear weapons (such threats clearly violate international law). Anger and frustration about this situation led to the ban treaty negotiations.

Will the ban treaty make a difference? It is too early to tell. This would not be the first time the Nobel Peace Prize has been awarded prematurely. In 2009 it was awarded to US President Barack Obama, citing his advocacy for a world free of nuclear weapons, but he did little to turn his vision into reality. As I have written in The Interpreter and elsewhere (for example, here and here), the ban treaty is contentious and deeply flawed. The treaty proponents made no effort to find common ground with the nuclear-weapon states and allies. There are substantive problems that undermine the requirement, unanimously endorsed by NPT review conferences, for universal high safeguards standards (on safeguards aspects, see here).

The greatest value of a ban treaty at this time would be to delegitimise nuclear weapons. However, the divisiveness of this treaty greatly diminishes its impact. It is regrettable that the treaty proponents were in a hurry to make a political statement and were not prepared to spend the time to find common ground. A high-level declaration of principles without the specific provisions that have proven so contentious could have been acceptable to a larger number of countries. As it stands, many countries will be unwilling to join the treaty, and the treaty will have no legal effect on non-parties, including those with nuclear weapons.

At the end of the negotiating conference, in July this year, the treaty text was voted for by 122 countries. Over three-quarters of these supporters are parties to nuclear weapon-free zone treaties, so the treaty adds little to their existing commitments. The treaty will enter into effect when it has 50 ratifications. Currently it has four (Guyana, the Holy See, Mexico and Thailand), and 49 signatories. Of the countries that voted for the treaty in July, 74 have yet to sign. While the current ratifications are well short of the number required for entry into force, formal ratification processes are usually time-consuming, so we can expect the number to increase over the next year or so.

What is more interesting is that so far less than half the countries that voted for the text have signed it. Domestic processes for signature can also take time, but it is possible that many countries, having made the political gesture of supporting the treaty, will not be in a hurry to follow through.

At least the treaty will help to remind politicians and the public that the need for nuclear disarmament has not diminished – quite the opposite. It will help build pressure for those countries with nuclear weapons to take the practical steps needed for disarmament. In this regard the award of the Nobel Peace Prize to ICAN is important in raising public awareness of the issues.

Should Australia sign the treaty? The current government has made it clear it will not do so. My advice to a future government is not to sign, because of the substantive problems in the text, but Australia should be doing everything we can to support the objective of nuclear disarmament. (I have a detailed discussion on nuclear weapons, the ban treaty, and practical disarmament steps in 'Nuclear War Must Never Be Fought: The Need for a New Global Consensus', a chapter in this book.)

Australia has a distinguished record in identifying the practical steps that are needed, especially through the Canberra Commission and, with Japan, the International Commission on Nuclear Non-proliferation and Disarmament. There is an urgent need to work with other countries in taking these efforts further. While the international political environment is far from encouraging, there is much that can be done. For example, Australia should be contributing to discussions in the US on defining the president’s authority to use nuclear weapons, including the adoption of a 'no first use' policy. Another important area of work is to resolve how the ban treaty will interact with the NPT, to ensure there is no damage to the latter. 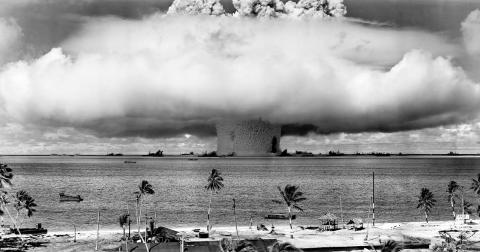 The medical evacuation bill is a really a debate on the limits of political discretion.
Christopher Mudaliar 19 Nov 2018 12:00