With mixed enthusiasm for a US-less TPP, it's all eyes on the promised Regional Comprehensive Economic Partnership with the 16 countries involved to meet in Japan next month.

Time for RCEP to step up

Donald Trump’s abandonment of the Trans-Pacific Partnership (TPP) trade deal has left his Australian allies with the awkward choice. They can either play for time with a domestic row about trade or embark on the tougher task of trying to introduce some of the TPP principles into the only other regional trade deal on the horizon.

The Turnbull government's fight with the Labor opposition over whether it is worth ratifying the TPP fits squarely into the former category, although it was alarming to see how fast Labor exploited Trump’s decision to white-ant the government over trade.

The first real opportunity for the latter approach will occur in Japan next month when negotiators from the 16 member countries of the Regional Comprehensive Economic Partnership (RCEP) re-convene to see if they can deliver on their promise to complete an agreement this year. RCEP negotiations intensified late last year with Trump’s victory as we reported here and here.

The effort to mould the old TPP into a posse of eleven without the sheriff will likely continue with Chile (one of the four founding members) trying to convene a meeting on this in March.  But the indications from places as diverse as Japan, Canada and Singapore are that TPP members are shifting attention to new frontiers. Japan is looking towards prospects of a bilateral deal with the pro-bilateral new US president and Singapore appears focused on the RCEP.

The idea loosely floated by the Australian government that China might be interested in now joining the TPP seems fanciful given China’s increasingly imperious approach to international architecture: ie, it won't join unless it helped write the rules. China has its core position in RCEP, its vague Free Trade Area of the Asia Pacific (FTAAP), and its One Belt One Road infrastructure initiative to burnish President Xi Jinping’s pro-globalisation rhetoric at the World Economic Forum, although it may well use platforms such as the Chile meeting to reiterate Xi’s words.

Meanwhile trade minister Steve Ciobo is getting some disparate advice from his predecessors as the trade policy landscape gets considerably more confusing. His immediate forerunner Andrew Robb says it would be extremely difficult to reconfigure the TPP without the US and would take about five years to negotiate membership for China. Former Labor trade minister Craig Emerson says the next step should be to seize on the Chile meeting to integrate the Pacific Alliance (Chile, Peru, Mexico and Colombia) with the ASEAN-Australia-New Zealand Free Trade Agreement. And former foreign minister and now ambassador to Great Britain Alexander Downer has suggested Britain might be interested in joining a reformulated TPP.

Australia’s challenge is to hold its nerve on broad regional trade liberalising strategies at a time when Trump has flicked the switch to the new mercantilism of a bilateral only approach. The US is even threatening to abandon agreements within 30 days of a dispute.

Australia has neither the market power nor a long term economic interest in trying to coat-tail on any such US approach, despite largely being a proxy for the US during the TPP negotiations until the final showdowns over issues such as patent protection for biologic drugs.

While the modelling of the TPP showed limited gains for Australia because it is already a more open economy than most other members, the government has argued correctly – on most provisions – that it placed Australia inside the most modern business regulation framework in the region.

Australia does have three bi-lateral negotiations under way. Ciobo seems increasingly confident of finishing the Closer Economic Partnership Agreement with Indonesia this year although the mood from the last discussions in Perth in November did not point to a particularly ambitious outcome. The two-year-old negotiations with India have gone very quiet as India focusses on the RCEP and worries about domestic manufacturing. The post Brexit discussions with Britain are subject to the actual Brexit timing and the British government’s apparent greater interest in talking with the Trump administration.

The big question hanging over the debate about a reformulated TPP minus the US is whether countries such as Japan, Malaysia and Vietnam, which don’t have trade agreements with the US, will want to proceed with their barrier reductions to other member countries when they don’t get the main prize of better access to the US.

Malaysia has clearly said it is switching attention to the RCEP, Vietnam has spoken vaguely about pursuing domestic reforms required by the TPP and, while Japan is the only country to have ratified the deal, it appears very focused on its bilateral relationship with the US despite Prime Minister Shinzo Abe’s recent regional tour. Canada and Mexico – two of the three TPP nations Australia with which Australia does not have a bilateral deal – are more likely to be more immediately focused on what Trump plans for his renegotiation of the North American Free Trade Agreement (NAFTA).

All this points to the RCEP negotiations in Japan next month being the place to stabilise the push towards a regional open trade regime that began more than 20 years ago at the APEC leaders summit in Indonesia. There’s no doubt the RCEP is a less ambitious process than the TPP with is primary focus on rationalising the noodle bowl of existing regional bilateral and other agreements rather than harmonising regulation.

But its broader Asian membership (including China, India and Indonesia) compared with the TPP and its decluttering focus would still be of considerable benefit to Australian businesses with Asian supply chains amid the uncertainty about the impact of the Trump Administration. Jeffrey Wilson from the Perth USAsia Centre neatly describes the shift under way to the RCEP in this new study.

Nevertheless, the TPP principles on services and regulation will remain in the background as a reference point to measure what progress the Asian countries can make on economic reform amid the Trump uncertainty. Australia’s challenge is to find regional allies to bring more of the TPP provisions into RCEP. If that doesn’t happen when Xi is talking so big about the importance of globalisation, a future US administration will have a ready-made roadmap for returning to Asian regionalism.

The Chinese state-owned enterprise Yanzhou has been a canary in the mine for Chinese business strategy in Australia. It was one of the first state owned enterprises to pull off a 100% takeover of an Australian company (Felix Resources in 2009), introduce new technology, and then to relist its local arm on the stock exchange. Meanwhile listed Yancoal has been suffering from the falling coal price after paying high purchase prices. So its move towards becoming Australia’s biggest coal producer by buying Rio Tinto’s assets for $3.2 billion is worth watching for what it says about China’s attitude to Australia and coal. Last year was a difficult year for Chinese foreign investment with serial regulatory set-backs but this deal suggests China Inc is not backing away from pumping in capital just when the Australian government faces some tough geo-political choices between the US and China. The recent spate of reports in the Australian media about China’s clean coal electricity technology (here and here) suggests it has a coherent, pragmatic strategy of pushing ahead with both coal and renewables when Australia is more mired in ideological debate about these matters.

Back to school for Austrade

Services exports have been the quiet improver in Australian trade over the past year despite the more publicised relief that the commodities price recovery provided to the balance of trade late in the year. The so-called visitor economy was up there with coal and iron ore as a foreign earner in 2015-16, pulling in $45 billion in export revenue with a growth rate well ahead of any other sector. So this only underpins the appointment of Stephanie Fahey, an academic with a background in international education, as the next head of Austrade. The commodities downturn has helped elevate services in the hierarchy of trade and economic diplomacy. Tourism is still bigger than education in this shift but the government is backing its rhetoric about a structural shift with this appointment.  Austrade gained responsibility for promoting international education and training in 2010. However, this function is not without deep tensions to do with quality versus quantity in foreign student numbers and scandals over private training companies. 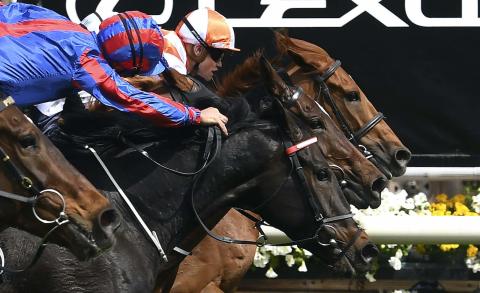 Despite many countries having issues with the West, China has few obvious alliance candidates.
Chengxin Pan 10 Aug 2018 06:00

Encouraging indigenous innovation is laudable but should not be conflated with technology nativism and protectionism.
Rupert Stone 19 Aug 2022 14:30

Beijing is blamed unfairly for its role in the island’s crisis ­– but its response has hardly enhanced China’s influence.