Economic diplomacy: Lifting the doona on a post-pandemic world

Australia can boast success in containing the virus. But its economy may still shrink more than other G20 nations. 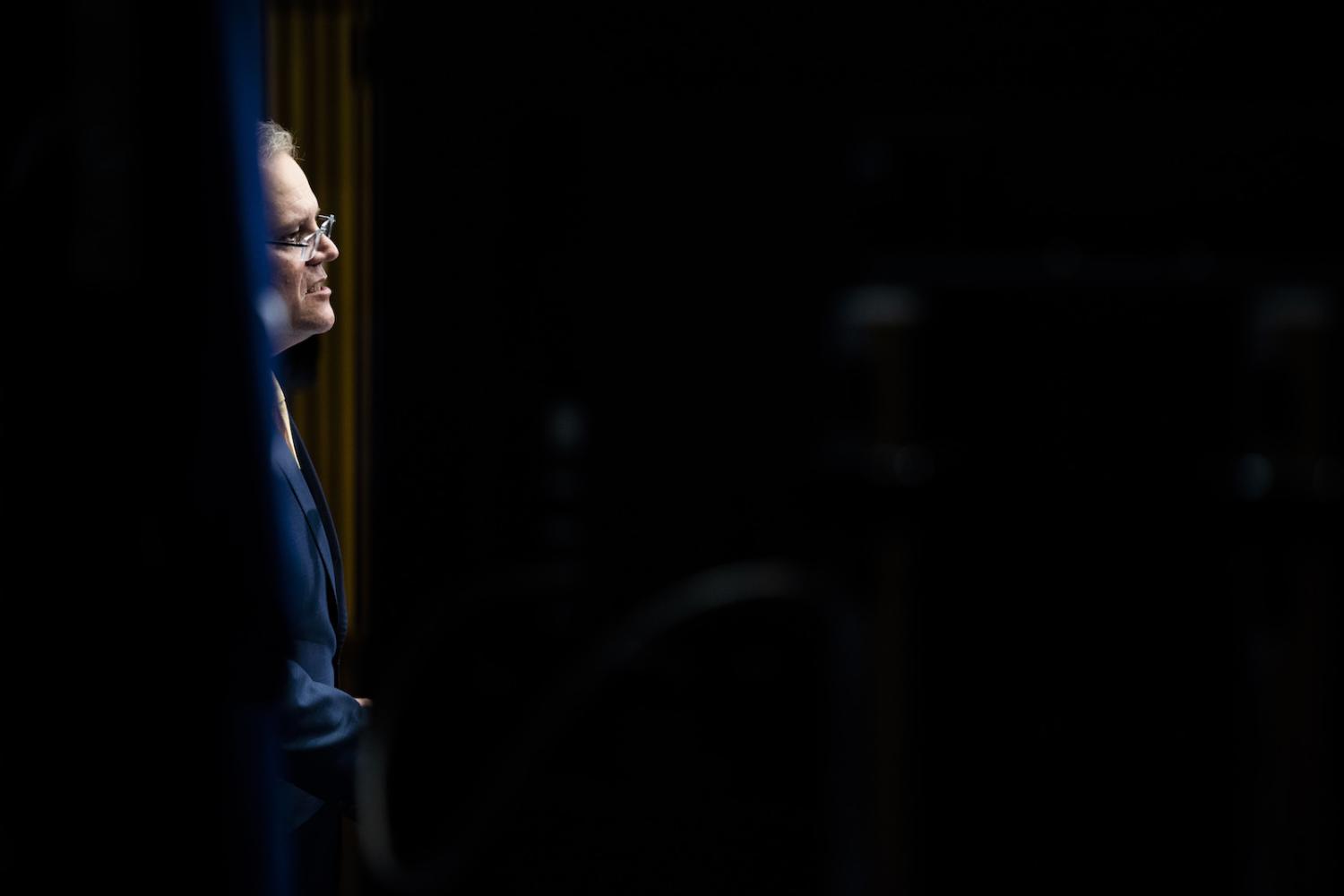 Once the hard man on people movement policy, Scott Morrison is now grasping at any source of economic growth (Rohan Thomson/Getty Images)
Published 7 May 2020     Follow @Greg__Earl

The language of lockdown has certainly undergone a change, from Prime Minister Scott Morrison advocating six months of hibernation only a month ago to now warning the country cannot stay under the doona much longer.

But it is no surprise the government's rhetoric has shifted to coming out into the cold light of the post Covid-19 economy, because Australia is in a perversely successful or painful position compared with its Group of 20 (G20) peers, depending on your perspective.

Australia's health numbers are world class and only likely to get better as other members such as Indonesia, Russia and Brazil release more accurate information. On a per million people basis, Australia’s death rate is 4% of the G20 average this week, its case rate is a quarter of the average, and its testing rate is about twice the average.

And using the International Monetary Fund’s early April numbers, Australia is spending more than three times the G20 average on direct fiscal rescue measures. It only falls back towards the pack when more opaque and hard to quantify below-the-line and contingent measures are taken into account. Other countries have increased fiscal spending since early April, in effect catching up, but even so Australia remains an early and significant big spender to beat the Covid crisis.

However, when it comes to the outlook the IMF is projecting that Australia’s economy will shrink this year by 6.7%, more than 40% more than the G20 average decline.

A lot of lives have been saved but a lot of money has been thrown at the problem. There may be other factors behind the economic downturn beyond the lockdown – such as the summer bushfires, the persistent difficulties with China links, and household debt. Yet now the challenge is to beat the dismal IMF contraction forecast. So what is the state of the global economic connections that have always been critical to national financial health?

It might be a once in a century pandemic. But when New Zealand’s Prime Minister Jacinda Ardern joined the national cabinet meeting of federal and state leaders this week, it was a reminder of how her country could have joined the Australian Federation more than a century ago.

NZ leaders have met the federal cabinet in the past and there is extensive regulatory cooperation, but the need for both countries to get some tourism going is rekindling the old Antipodean link.

Travel and education are top-five Australian exports and about 29% of the population was born overseas, illustrating the role immigration has played in maintaining relatively youthful, skilled workforce.

With many of the one million temporary residents having been told to go home at the height of the disease crisis, Australia is facing the uncertainty of negative net migration for the first time in decades.

The Mitchell Institute has underlined how serious it would be if foreign students failed to return, estimating that universities could lose $19 billion over three years and the economy $40 billion just from this one slice of lost inflow of people.

Not content with that, the Labor opposition has now broken the fragile Covid-19 political consensus with a push to curtail future temporary worker visas to defend Australian jobs.

Morrison, once the hard man on people movement in his days as immigration minister but now grasping at any source of economic growth, has responded:

I think that’s an insensitive … and an unbalanced way that’s not only not good for the economy, but equally, I think it puts unnecessary pressures on particular communities around Australia.

So, enter Ardern. The swift embrace of her trans-Tasman travel “bubble” idea underlines how beating the IMF contraction forecast will require visitors from at least somewhere. If it is not students from China and short-term Indian IT workers, Kiwis will do. After all, 1.47 million of them were only just beaten by Chinese as the top source of visitors last year.

The biggest move so far on the capital inflow front has been the decision to temporarily review all proposed foreign investment in order to prevent opportunistic takeovers amid economic weakness – possibly from China.

As noted here previously, this was ahead of the pack globally although others are catching up, mostly notably India with its decision to review all investment from nations with which it shares a border – also in effect China.

The Foreign Investment Review Board (FIRB) has already been applying a more intense national security lens to foreign investment under the leadership of former intelligence agency chief David Irvine. And there are now calls to build on the “temporary” review decision to shift FIRB from the more open market Treasury to the Department of Prime Minister and Cabinet, where it would it become part of the national security bureaucracy.

Despite this muscling up, the most interesting foreign investment announced since the tougher FIRB review rule was put in place has actually come from one of the icons of Chinese ecommerce Tencent, into the local digital payments company Afterpay.

But perhaps the most significant foreign investment now underpinning Australia’s economic awakening may be the strong demand from Japanese pension funds for the Australian government bonds funding the country’s world class stimulus spending.

While the Labor opposition has taken a populist position on immigration, it has notably still backed the government on free trade despite all the economic sovereignty discussion which is popular with Labor’s union base.

This keeps government borrowing costs down. But it is also significant from a national security perspective because it parallels the way Japanese companies have been quietly investing heavily and diversely in Australia in recent years despite all the controversy surrounding higher profile Chinese investment.

These are market forces at play, driven by the poor growth prospects in Japan rather than the economic interventionist ideology of the national security hardliners. But it does neatly fit the new narrative of diversification.

Despite the talk about domestic economic sovereignty and new tensions with China, Australia’s main actions on the trade front have been to shore up the World Trade Organisation (WTO) and keep open food trade routes, both to some extent in alignment with China.

Trade Minister Simon Birmingham reportedly paid heed to what he termed “sovereign capability” in a recent online appearance at a seminar run by the Breugel Institute, in Belgium. But he then went on to reassure:

What we want to do is retain those sorts of core and essential capabilities that come with having base levels of advanced manufacturing, but certainly not lose the fact that we should all still play to our comparative advantage – because that is what allows goods and services to be accessed most effectively across the world, at lowest cost to individuals around the world.

Australia’s participation in a group of countries (accounting for about half of world trade, including China) aiming to keep a trade dispute settlement process operating until US opposition to the existing WTO Appellate Body is overcome was underway before the pandemic. But it is still an important move to keep a key piece of the globalisation architecture alive.

And while the Labor opposition has taken a populist position on immigration, it has notably still backed the government on free trade despite all the economic sovereignty discussion which is popular with Labor’s union base.

The only projections from the government about the post-pandemic trade outlook so far have come from the Department of Agriculture's forecasting arm, which is positive about the future for trade with China but warns of broader post-Covid supply chain disruptions that might hurt exports and delay imported farm inputs.

And in an insight into the complexity of the Australian trade relationship with China, it notes that 4% of Australia’s raw food exports are actually used as inputs for Chinese processed food exports.

Previous Article
Creating a Pacific bubble
Next Article
Wuhan lab claims: Is Australia questioning China? Or the US? Both?

Speculation about succession by Hun Sen’s eldest son is an interesting talking point – that could go on a while yet.
James Chin 19 Jul 2017 15:58

The three pillars of the Malay establishment would be much more likely to accept a non-Barisan Nasional government if it is one with Mahathir at the top.
Retno Maruti 18 Jul 2019 06:00