A few remarkable wins for Pacific women in local politics

But what is far too often the exception should become the norm. 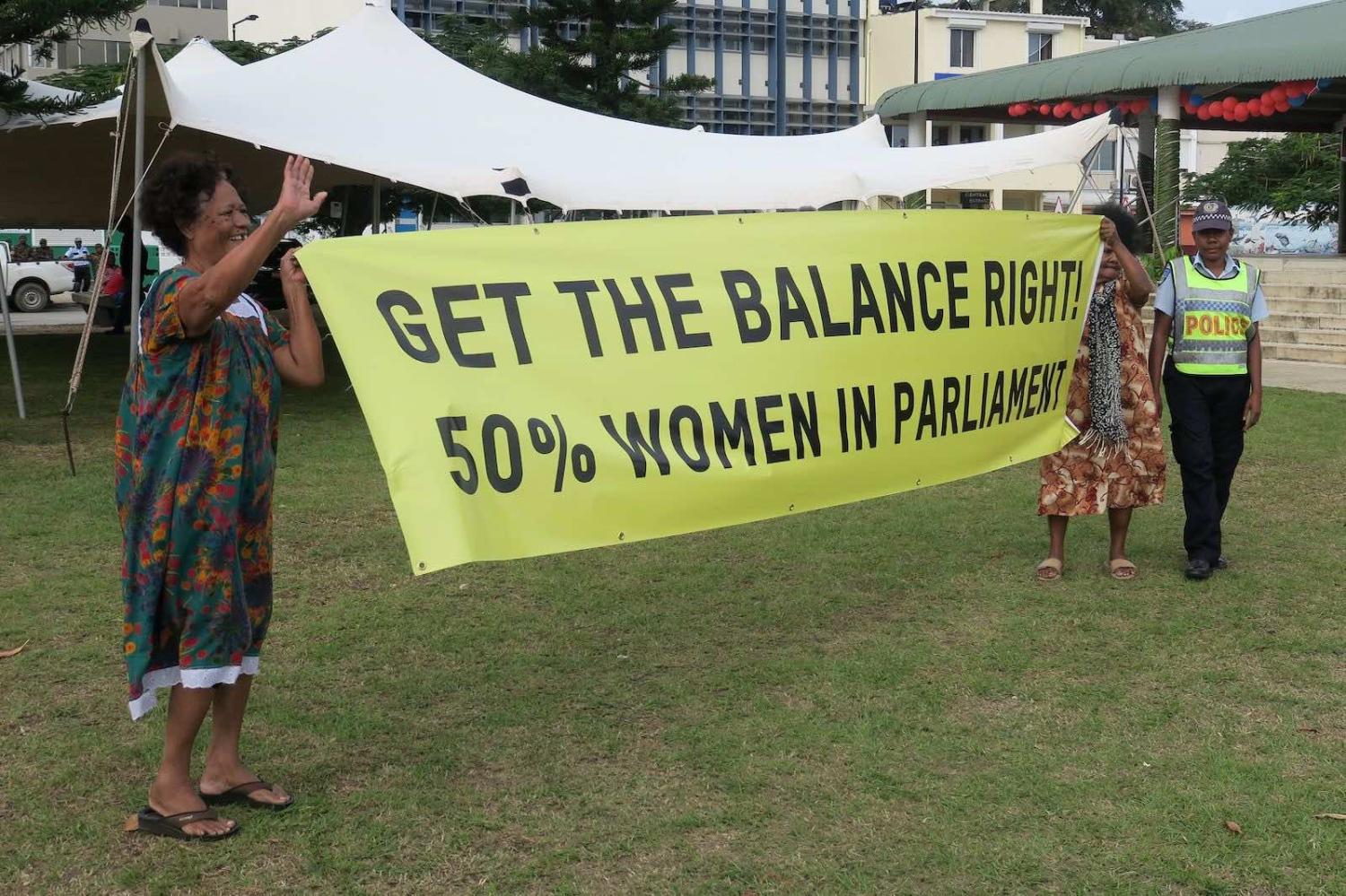 “A country without a woman MP is not a democratic country”, declared Dame Carol Kidu, Papua New Guinea’s former – and only female – opposition leader, this month.

Dame Carol’s comment refers to the current state of politics in PNG, a democracy, where only seven women have ever been elected to its parliament. Dame Carol is one of them. She had a long, successful career there (1997–2012) including being the only woman and Minister for Community Development for much of her tenure. Preceding Dame Carol were the founding women: Dame Josephine Abaijah, the first woman elected to PNG’s Parliament (1972–82), Nahau Rooney (1977­–87), and Waliyato Clowes (1977­–82).

Dame Carol’s story is an outlier. As an Australian-born woman, she served in the PNG parliament for three terms in a system that’s difficult to get re-elected, regardless of gender. When she retired after two terms of being the only female member, three women were elected. They survived one term. Now, there are none.

PNG’s regression in female political representation does not reflect women’s willingness to get elected there. The 2017 elections saw a record number of female candidates stand for election (albeit only 5 per cent of the candidacy). The Pangu Party, home to current Prime Minister James Marape, last year also elected its first female National President, Erigere Singin.

An evaluation of gender programs in the Pacific demonstrates how hard it is to move the needle on restrictive cultural norms.

Nonetheless, hard-to-budge structural and socio-cultural factors preventing PNG women from succeeding have yet to be formally addressed through legislated quotas. The debate around reserved seating has gone in swings and roundabouts: with every proposal to emerge the inevitable politicking to see it adopted has come with compromise. In 2011, for example, parliament voted to amend the constitution so that 22 seats could be reserved for women, under the Equality and Participation Bill. The next step – the enabling legislation – was voted down. Now, it’s looking like five regional seats that are unlikely to be created before this year’s June election.

The lack of political experience for PNG women is shared across the Pacific. In this region, rates of women’s political representation remain the lowest in the world. While there is a common thread binding these nations together (they’re democracies with few-to-no woman members of parliament – MPs), country-specific contexts set them apart. It means there have been some disappointing results but also some remarkable wins amid some tough and diversified electoral conditions.

In Samoa, for example, the quota system created a constitutional crisis in 2021’s election. There, 10 per cent of elected representatives – totalling five seats – must be female. In 2021’s election, due to boundary changes, five seats only totalled 9.8 per cent of parliament. Fiame Naomi Mata’afa, the leader of the Fa’atuatua i le Atua Samoa ua Tasi (FAST) party who defected from the governing party the year prior, won 26 of 51 seats. The issue of not reaching 10 per cent of seats complicated the results, opening an opportunity for the other major party to add another female member to its elected team. This would’ve caused a deadlock. The matter was taken to court and the courts ruled in favour of Fiame Mata’afa, making her Samoa’s first female Prime Minister (notable, given her father was Samoa’s first ever PM).

There aren’t many women in Fiame Mata’afa’s parliament though, because only matai, or chiefs of an extended family, can be elected. Only 7 per cent (1,228) of Samoa's matai were female at the last survey (2015) and one out of ten villages prohibit women from becoming matai. While there is little to celebrate about the small number of female chiefs, they’re more likely to have higher status – over half were High Chiefs – making Fiame Mata’afa’s story unsurprising. (Her mother, by the way, was an MP and Samoa’s High Commissioner to New Zealand, and her father’s chiefly title – Fiame – was passed on to her when he died).

Hilda Heine, the only other female head of government in the Pacific (serving the Marshall Islands) remarked on social media that PM Fiame Mata’afa’s win “is a win for Pacific women”. But there are others. In Tonga, a woman is serving in cabinet who is not elected to parliament – the Minister for Foreign Affairs and Minister for Tourism, Fekitamoeloa Katoa ‘Utoikamanu. She’s also the highest-ranked Pacific Island person at the United Nations through her role as High Representative for the Least Developed Countries, Landlocked Developing Countries and Small Island Developing States and Under Secretary General.

This is a big win, but the issue of no women elected to Tonga’s parliament remains. In the meantime, Tongan women can practice in the Tonga Women’s Parliament, but it’s no compensation for not being at the real thing.

Fiji is a success story. Women’s representation there has increased to 21.6 per cent. This is a record number of women elected to Fiji’s parliament (ten of 51 seats) and record number running for office (up 36 from the previous election). But while Fiji may now be near-equal to the rate of female representation in the US House of Representatives, there is an election due later this year which may upset Fiji’s progress, as experienced in both PNG’s and Tonga’s most recent elections.

Regardless of success stories, gender equality won’t be reached across the Pacific anytime soon. An evaluation of gender programs in the Pacific demonstrates how hard it is to move the needle on restrictive cultural norms. But given the documented benefits of boosting women’s political representation, it’s absolutely worth the fight.

Previous Article
Not so quiet on the Southern Front
Next Article
Is bipartisanship on national security a good thing?

Bougainville’s independence referendum is on the horizon. The prospect of autonomy in other provinces is also growing.
Alexandre Dayant 7 Feb 2020 06:00

Growing UK presence in the Pacific Islands aims to boost prosperity, but a range of factors could tip the balance.