With outbreaks in the ranks and resources directed home, America’s commitments abroad will be challenged. 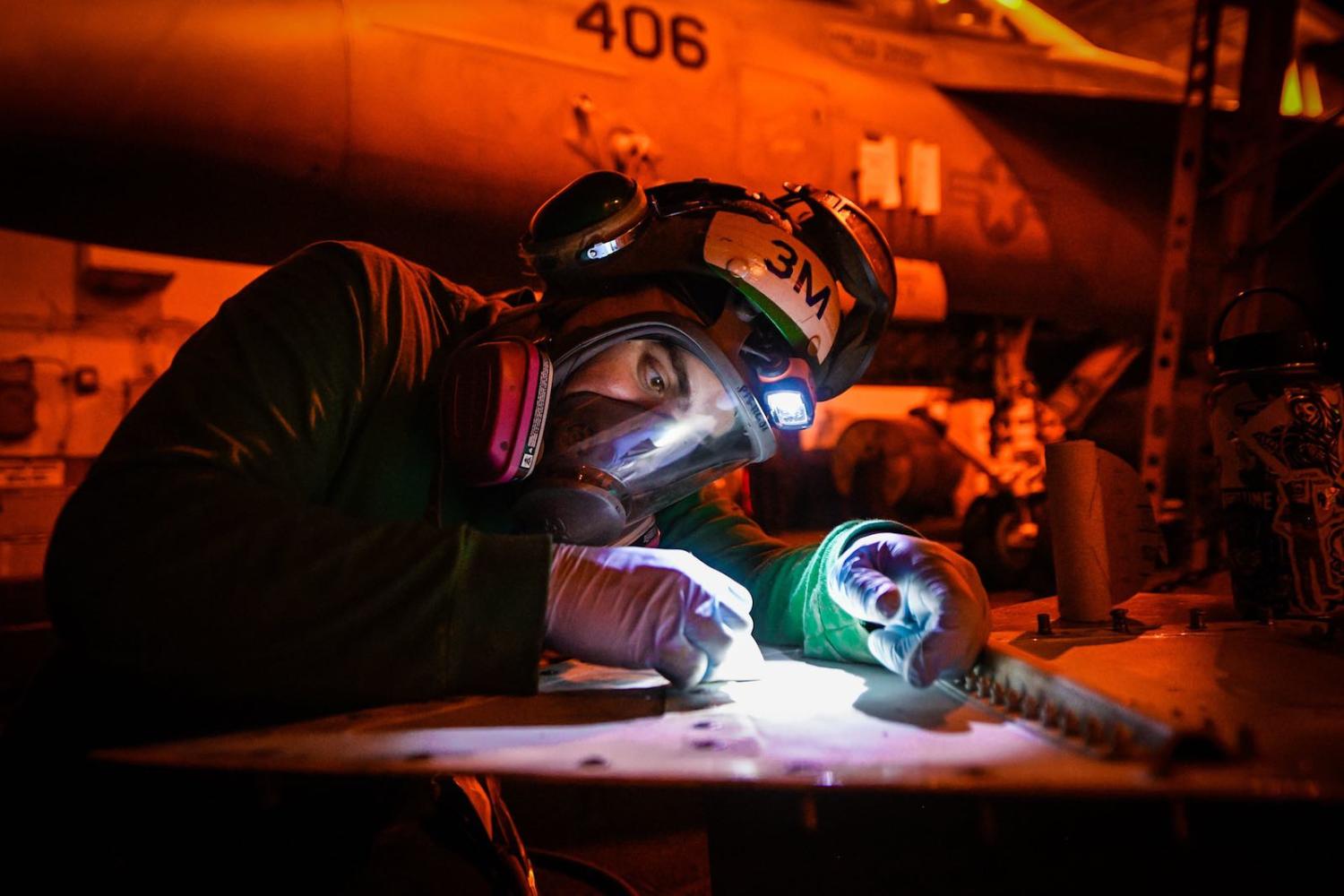 Maintenance work aboard the aircraft carrier USS Theodore Roosevelt in March, the ship now at the centre of a Covid-19 outbreak (US Pacific Fleet/Flickr)
Published 8 Apr 2020

Captain Brett E. Crozier, the recently deposed commander of America’s pandemic-stricken aircraft carrier the USS Theodore Roosevelt, was absolutely right when he told his superiors that “sailors do not need to die” from the Covid-19 outbreak onboard. But he was well off the mark in his assessment that America is “not at war.”

The United States military has been at war since 2001. And it is currently facing challenges of daunting complexity on three additional fronts. It’s fighting to support civilian agencies in the struggle against Covid-19 across a sickened US homeland. It’s fighting to preserve a healthy force as the coronavirus spreads through its ranks. And it’s fighting to uphold its readiness and operational commitments abroad.

Balancing these competing priorities is a wicked task. It will involve unavoidable trade-offs and more than a few dropped balls. While the Pentagon is likely to do all that it can to make sure America’s military presence in the Indo-Pacific is in good working order, it’s not realistic to expect business as usual.

Australia will have to get used to a more strained US military in our neighbourhood over the course of this pandemic.

Following weeks of sluggish action by the White House to mobilise resources for the Covid-19 onslaught, President Donald Trump and the US Department of Defense began to call up the military to combat the pandemic in mid-March.

It was a welcome move. With 1.3 million active duty soldiers and a reserve National Guard of 440,000 part-time army and air force personnel, the US armed forces have a significant capacity to act with speed at times of national emergency. All of America’s state, territory and district governors have, in fact, already called on the National Guard units under their jurisdictions to support local relief efforts.

But by invoking the president’s Title 32 authority to call up the Guard, Trump placed billions of dollars of federal funds behind this unprecedented domestic military mobilisation – lifting a financial burden off the states and paving the way for more boots on the ground.

There are now around 40,000 troops engaged in the coronavirus fight – including thousands of active duty military medical personnel, over 20,000 National Guard members, two hospital ships and 15,000 personnel from the US Army Corps of Engineers – with tens of thousands more likely to be brought in over the coming weeks.

Although in the US the National Guard is the preferred military force for domestic activities, there are limits to what it can do on the frontline of a pandemic. Many of its members – up to 20% – serve in civilian emergency services or as medical personnel in their communities, making them hard to redeploy without creating new capacity problems.

And the sickness is itself a risk. While there’s only been one COVID-19 death in the National Guard so far, many have fallen ill or been placed in quarantine. It is only a matter of time before the rates of death and infection within Guard ranks approach those of other frontline agencies, such as the New York Police Department, where one in six is infected.

This raises the prospect that more active duty soldiers, particularly medical staff and other specialists, may be called on to provide further support to civilian agencies as the pandemic intensifies.

The military, however, is struggling to balance the health of its personnel with its own day-to-day defence responsibilities at home and abroad.

Even before the pandemic struck, anxieties had grown among US allies and partners about Washington’s capacity and willingness to uphold its regional security commitments in an era of flatlining defence budgets, “America First” policies, and rising Chinese military power.

Although there is capacity across the force to further supplement the National Guard and civilian services – indeed, more than 1000 extra military medical staff are heading to New York City right now – it doesn’t take long for these additional tasks to chip away at the overall readiness of the armed forces. This is especially true for specialised personnel, like medics and nurses, whose numbers are scaled to meet military requirements for training, deployment, and care of veterans and their families, with little slack leftover for anything else.

Reassigning these and other combat ready troops to the pandemic frontline may well open up gaps and vulnerabilities in parts of the armed forces – limiting their capacity to conduct basic training, undertake exercises, and respond to fresh crises elsewhere.

This situation is exacerbated by the toll that Covid-19 is exacting on the military writ large. According to the Pentagon, over 1500 defence personnel have already been infected by the coronavirus. This statistic sits behind Defense Secretary Mark Esper’s decision to suspend all travel and overseas movement until mid-May – barring a few operational exceptions – in an effort to contain the outbreak in military ranks.

While some workarounds are being developed – such as 14-day quarantine periods before deployment, safety bubbles for exercises, and the mandated wearing of face masks – the military’s agility will take a hit.

Crozier’s former aircraft carrier is a case in point. The nuclear-powered Theodore Roosevelt is still hauled up in Guam after at least 173 sailors tested positive to COVID-19, including the Captain himself, leaving it technically operational but unable to function as normal. It’s just one of at least four US Navy ships with a declared outbreak onboard, a number that’s likely to be far higher but which is now protected by a Pentagon decree so that potential competitors can’t find out where deployed US forces are most badly afflicted.

All this is starting to affect America’s military presence in the Indo-Pacific. Both US aircraft carriers in the Western Pacific – the Theodore Roosevelt and the USS Ronald Reagan – have now been hit by Covid-19. Commander of US Forces Korea, General Robert Abrams, has declared a public health emergency and modified the way his units conduct routine training and maintenance, dividing his troops into smaller teams and placing some support personnel under a shelter-in-place order.

America’s annual rotation of 2500 Marines to Darwin this month has been indefinitely delayed. Military drills with the Philippines have been cancelled. And doubts are growing about the feasibility of US Indo Pacific Command’s flagship biannual exercise, Rim of the Pacific, which is scheduled to bring together 25 regional nations and 25,000 personnel in July.

These restrictions on normal activities will have an effect on the way Indo-Pacific nations view America’s military presence in the region.

Even before the pandemic struck, anxieties had grown among US allies and partners about Washington’s capacity and willingness to uphold its regional security commitments in an era of flatlining defence budgets, “America First” policies, and rising Chinese military power.

Many countries, including Australia, were impressed by the Pentagon’s decision in the 2018 National Defense Strategy to refocus the military on great power competition in the Indo-Pacific after years of distraction in Middle Eastern counterinsurgency wars. But a good deal of scepticism remained about Washington’s ability to translate this new strategy into action.

Stricken warships, stalled deployments and Washington’s acute preoccupation with its own poorly handled humanitarian crisis will not reassure Indo-Pacific allies that the US is able to walk and chew gum. On the contrary, as the pandemic inevitably draws resources away from the Pentagon’s newly fashioned strategic priorities, US allies and partners will be watching closely to see just how strained America is in the midst of Covid-19.

The seafood you bought from your local market could have been caught by a slave.
Kelsey Munro 2 Jul 2019 11:30