Practical action will meet a financial pledge to the poorest countries on the planet.

Climate finance was high on the agenda in Paris last month as French President Emmanuel Macron co-hosted the 'One Planet Summit' with the UN and World Bank, preceded by a 'Climate Finance Day' with bankers and major institutional investors.

Climate finance has been a central pillar of global environment negotiations, despite more media focus on targets for mitigation and the need for adaptation in vulnerable nations. The Paris Agreement on Climate Change would not have been finalised without the pledge by wealthier nations to fund the transition to a low-carbon energy future in the developing world, especially in Least Developed Countries (LDCs) and Small Island Developing States (SIDS).

Under the Paris Agreement, OECD countries must contribute to the global target of US$100 billion a year by 2020, from both public and private sources. Larger developing nations such as China can also contribute on a voluntary basis.

But a 2016 OECD study found that we are only two thirds of the way to the target; even then, the $100 billion a year figure will not meet actual needs. The UN Environment Program says that adaptation costs in developing countries could rise to between $280 billion to $500 billion each year by 2050.

Prime Minister Malcolm Turnbull has pledged AU$1 billion over five years to help developing nations combat the adverse effects of climate change. This includes $200 million over four years for the Green Climate Fund (GCF) and $300 million on climate change and disaster preparedness in Pacific Island countries in 2016-2020. But at this level, Australia is failing to contribute its fair share of the global objective.

The development agency Oxfam has reported that based on relative economic strength and contribution to greenhouse gas emissions, Australia's total contribution from public and private sources should reach at least AU$3.2 billion per year by 2020, with at least half being public funding for adaptation.

Even more conservative 'effort sharing' methodologies have estimated that Australia's responsibility and capability requires a massive increase from current pledges. ANU researchers have proposed that 'a fair share for Australia may be around 2.4% or US$2.4 billion a year.'

In a 2011 Analysis paper on climate funding published by the Lowy Institute, I argued:

Australia and other countries will need to find predictable long-term sources of finance outside their foreign aid programs to meet their share of the global commitment of US$100 billion a year.

More than six years later, both major political parties in Australia have allowed our international climate funding to be drawn solely from the shrinking foreign aid budget. The reliance on the aid budget is despite long-standing calls from developing countries that climate finance should be 'new and additional', beyond existing development commitments around health, education, agriculture and governance.

The Gillard government pledged around AU$200 million a year between 2010-12. Years later, we still give roughly the same amount, even as foreign aid funding has shrunk under the Coalition to the lowest ratio ever at 0.26% of gross national income, heading for 0.2% by 2020.

Looking beyond foreign aid, there is a range of potential climate funding sources, including financial transaction taxes, levies on maritime bunker and aviation fuel emissions, revenues from carbon market auctions, crackdowns on corporate tax avoidance and tax havens, the redirection of fossil fuel subsidies, and revenue from Reduced Emissions from Deforestation and Forest Degradation funding.

Countries such as France and New Zealand have begun to investigate innovative funding sources. The French government commissioned Bill Gates to report to the G20 on potential sources of finance; the subsequent Canfin-Grandjean Commission issued its findings in 2015.

In the October 2016 'Roadmap to US$100 Billion', Australia joined other OECD countries in pledging further action. A key priority included 'using public finance and policy interventions to effectively mobilise private finance.' At the One Planet Summit, over 200 institutional investors agreed to pressure major corporate greenhouse gas emitters to improve their climate policies (a reflection of the debate in Australia over financing for Adani's proposed Carmichael mine in Queensland).

Private funders have a key role to play, given the trillions of dollars available in venture capitalist funding, superannuation, investment and pension funds. But private sector investors seek a return on their investment. The Canfin-Grandjean commission notes that the majority of current private sector climate finance for developing countries targets just Brazil, India and China. Their report argues there is still a crucial need for public adaptation funding for SIDS and LDCs.

In recent years, however, Coalition government policy on overseas aid and climate finance has been marked by ever greater unpredictability. Aid has dropped to the lowest recorded levels since 1974 and the Turnbull government has even floated proposals to use already limited climate finance to fund coal plants in Asia. Since 2013, the Coalition has announced the withdrawal and then reinstatement of financial commitments to the Green Climate Fund (GCF), disrupting our engagement with this important global funding mechanism.

Our leadership role in the GCF has won support from Pacific neighbours, apart from the Abbott interregnum, when we abandoned this work. DFAT's Ewen McDonald has just completed a widely-lauded term as co-chair of the GCF Board. Australian diplomat Howard Bamsey heads the GCF Secretariat in Korea. But the Australian government should also increase its annual contribution to the GCF, beyond the current four-year commitment of AU$200 million.

Where will this money come from, at a time Canberra is pledging tax cuts and increases in domestic spending? The target date of 2020 is not far away and we need more creative responses to this challenge.

First, the Australian government should appoint a commission to report on innovative sources of climate funding outside the ODA budget, in order to guarantee ongoing public financing for climate adaptation in LDCs and SIDS.

Beyond improving the adequacy, accessibility and predictability of funding, the government can improve existing climate finance programs. More work should be undertaken to improve coordination between global, regional and local development partners, and to prioritise civil society and community initiatives, with access windows in funding mechanisms for non-state actors. There is also a need to better manage the diversity of multilateral and bilateral funding sources, and improve the transparency, evaluation and documentation of existing projects.

Expanded commitment to the GCF would have diplomatic and practical outcomes, as the Trump administration reduces its commitment to the global fund. In Paris, Macron played the anti-Trump, pledging funds to US climate researchers and promising to 'make the planet great again'. Beyond these theatrics, there is scope to take practical action and meet our financial pledge to the poorest countries on the planet. 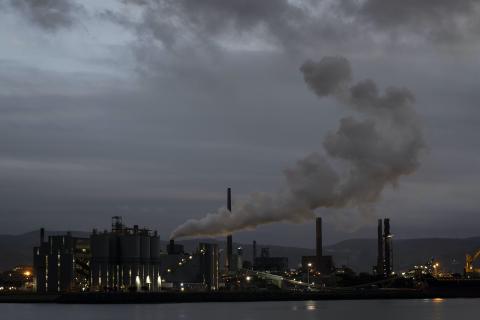