A responsive approach has clear benefits, but Washington and Seoul must be careful not to fall out of line. 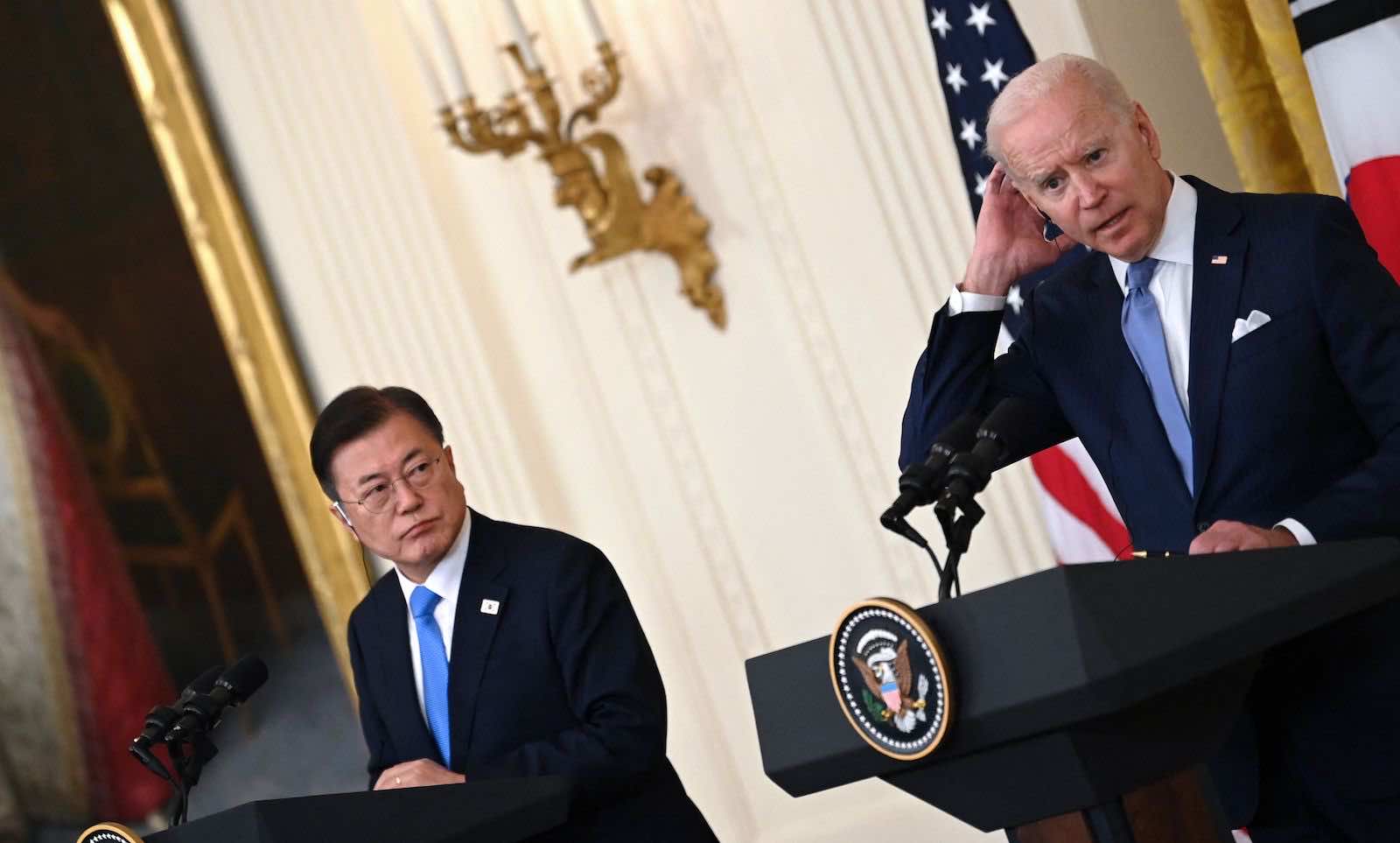 South Korean President Moon Jae-in and US President Joe Biden in the East Room of the White House on 21 May (Brendan Smialowski/AFP via Getty Images)
Published 24 May 2021 13:30   0 Comments       Follow @KhangXVu

South Korean President Moon Jae-in received a boost in his outreach to North Korea last week after talks with US President Joe Biden. Biden announced he would be open to a summit with North Korea Chairman Kim Jong-un on the proviso that Kim would be willing to give up his nuclear weapons during a proper series of lead-up negotiations. This was in line with Moon’s post–Donald Trump approach to North Korea, given that the South Korean government now thinks that both sides need to “do more groundwork before the top leaders meet” to increase the chance of success.

Indeed, if there was a notable feature to emerge from the Moon-Biden talks, it was a focus on being  “flexible”.

In the lead-up to the meeting in Washington, South Korean Foreign Minister Lee In-young called for the United States to “flexibly” apply sanctions on North Korea so that an atmosphere of dialogue could be created. He also urged Pyongyang to respond “flexibly” to the South and US outreach.

Flexibility can signal either a more compromising attitude to negotiations or a lack of details in policymaking and implementation.

For its part, an anonymous US official briefing reporters on talks also emphasised that Washington wanted to chart a “flexible” way forward, knowing that past efforts were not successful. This stance matches the policy review Biden had released in the weeks prior in a bid to strike a midpoint between past approaches of “maximum pressure” and “strategic patience”.

The question that remains, however, is whether “flexibility” in approaching North Korea is positive or negative. Flexibility can signal either a more compromising attitude to negotiations or a lack of details in policymaking and implementation. The former may boast a higher chance of success, while the latter can result in chaos and miscoordination.

Leaders at large do not want to tie their hands. The Biden administration North Korea review is such an example. The review itself was intentionally designed to be open to change, committing to diplomacy yet without any details on how to bring Pyongyang back to the table.

Details were also missing from the Moon-Biden summit. Biden has positioned Washington to respond appropriately to Pyongyang’s behaviour, making North Korea’s goodwill a condition, rather than the aggressive engagement approach as Moon has so far championed. Biden’s decision to reaffirm the 2018 Singapore Statement during the talks with Moon was a further example of “flexibility”, given that the statement from Trump’s first summit with Kim lacked details on how the two parties can work towards North Korea’s denuclearisation. Biden has demonstrated support to Moon by backing the statement without restricting his own freedom to act.

Importantly, there is no guarantee that Washington will continue to engage North Korea if Pyongyang breaks its nuclear and long-range missile moratorium. Former president Barack Obama in his 2009 inaugural address also promised to “extend a hand” if adversarial leaders unclenched their fists, only for Pyongyang to conduct nuclear and missile tests in the same year. Obama struck the Leap Day Deal with Pyongyang in 2012, but the North broke it within a month. Obama adopted “strategic patience” strategy largely because North Korea was not showing its willingness to engage.

Biden’s policy to reach out to North Korea first reflects a less rigid stance, but with his North Korea policy depending heavily on how Pyongyang responds, there is still much uncertainty. A return to an approach defined by strategic patience is still possible.

Our alliance and close cooperation with the Republic of Korea will help us face some of the most pressing challenges of our times including global health, climate change, and development. pic.twitter.com/XibS56f3oi

Biden also showed flexibility in the talks with Kim by offering support for the 2018 inter-Korean declaration at Panmunjom. Biden has made clear he will tolerate some degree of North-South cooperation without strictly subjecting it to US approval. The Trump administration had tied Moon’s hands implementing the Panmunjom declaration via a working group and US sanctions on North Korea.

This shift will doubtless by welcome by Seoul. However, there can be a fine line between policy flexibility and the kind of miscommunication and misalignment between the allies that will allow Pyongyang to reap rewards without committing to denuclearisation, a problem the Biden administration is clearly alert to. The US and South Korea committed to coordinate respective North Korea policies in “lockstep”, but it is possible that differences in implementation can lead both sides to misinterpret one another.

Certainly, Biden and Moon can think of their first round of talks as a diplomatic success story. However, the lack of details and the emphasis on flexibility represent a potential pitfall in the alliance’s approach to North Korea.