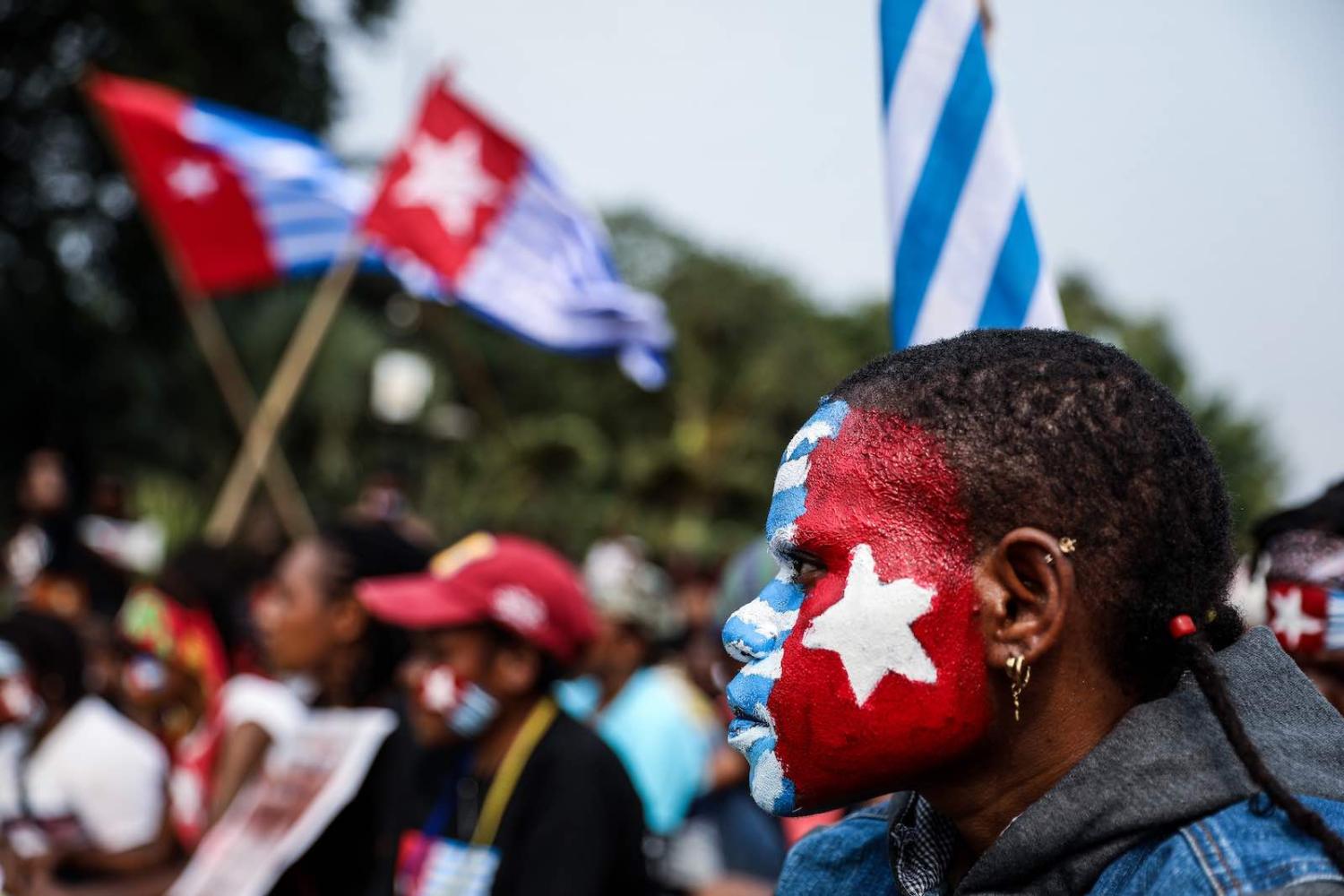 A woman with her face painted with the flag of West Papua, at a rally in Jakarta, Indonesia, 28 August 2019 (Andrew Gal/NurPhoto via Getty Images)
Published 25 May 2021     Follow @LSJorari

A video recently surfaced on social media in Papua New Guinea, featuring a group of about 20 men, gathered around their apparent leader, declaring war on Indonesia.

“People of East Sepik,” the leader says, referring to one of the two provinces which stretch along PNG’s northern coastline towards the border with Indonesia, “on behalf of the citizens of Papua New Guinea, we are now standing here to declare that we are ready to go and fight against Indonesian soldiers, for helping our people of West Papua.”

Indonesia, he goes on, is a “thief” for illegally occupying indigenous land and plundering resources.

Our government does not have an initiative to support our people of West Papua, therefore we the people of East Sepik, we are ready to go and support.

It’s a call to arms and an appeal to common ties of identity. West Papua has long been an overlooked conflict internationally, whether for reasons of ignorance, prejudice or malice. But for neighbouring PNG, proximity has its own complication.

The video and the apparent guerrilla group clearly won’t make the Indonesian military quake in their boots, but there are fears such cross-border displays of support may lead to distrust in Indonesia-PNG relations.

The location where the video was filmed remains anyone’s guess, with the men in camouflage standing in what looks to be a typical village, with palm trees at their backs. But the footage was enough to spark a media stir and clearly raises questions for governments, national and provincial. Neither PNG James Marape nor East Sepik Governor Allan Bird have commented publicly, but that doesn’t mean diplomatic talks haven’t been held in private. Indonesia has a consulate in the major PNG border town, Vanimo, in West Sepik Province, as well as its embassy in Port Moresby. It would not be a surprise if a call went through straight to the top. Indonesia’s ambassador Andriana Supandy has blamed the video on a “lack of balanced information”, while PNG Defence Force chief Major-General Gilbert Toropo has said “PNG citizens should not involve themselves with the Indonesians and their internal issues”.

Following Indonesia’s application of the ‘terrorist’ label to West Papuan freedom fighters, sympathizers in PNG have declared their intention to fight against the Indonesian army in support of West Papuans. pic.twitter.com/GUzhs1P0qI

Successive governments in Port Moresby have worked hard not to sour relationships with Jakarta, almost to the point that there appears to be a standard operating procedure on “how to handle diplomatic relations with Indonesia in issues relating to West Papua” written for all new Prime Ministers entering the office.

From the outset of his term, Prime Minister James Marape has said PNG would respect “Indonesian sovereignty and their borders”. But he also acknowledged the delicacy involved, saying that such respect “must come in the context of human rights”. A diplomatic statement, for sure, but if Marape’s position was challenged by events, who knows what the result might be.

Meanwhile, authorities in the East Sepik province insist the video is really a non-issue. This seems unlikely to end the matter.

Efforts to draw attention to the plight of people in West Papua end up being merely hashtags that gain popularity when social media algorithms allow them to trend, only then disappearing.

PNG and West Papua share a border, yet without the line on a map the people living on either side would be wantoks – people bound by kinship, language and community ties. Silence in the face of persistent evidence of abuses and crackdowns is not feasible. PNG should hold Indonesia accountable for rights violations.

West Papuans have been fighting for the right to self-govern for years, citing racial oppression and suppression of their black-Melanesian race as key factors, all while watching fellow Melanesian neighbours Papua New Guinea, Solomon Islands, Fiji and Vanuatu having gained their independence decades before.

Underground advocacy groups and social movements have been formed in Asia-Pacific countries to draw attention to the plight of people in West Papua. But without the backing of governments, in modern times these efforts end up being merely hashtags that gain popularity when social media algorithms allow them to trend, only then disappearing into oblivion, waiting for the next story or batch of depressing photos leaked.

Some key PNG parliamentarians have been vocal about the record of violence and atrocities in West Papua.

In 2019, National Capital District Governor Powes Parkop was reported to have said that European colonisers split up the island of New Guinea and gave the West Papuans to the Indonesians. “I call on Papua New Guineans to repent for neglecting West Papuans since becoming independent in 1975,” Parkop said, adding that people in PNG needed to speak up for their fellow Melanesians across the border.

Oro Governor Gary Juffa has also spoken out on many occations, saying PNG cannot be considered free as long as West Papuans are striving for freedom. He accused his own people of forgetting their brothers and sisters. “Our Melanesian people are suppressed and oppressed,” Juffa said during a Free West Papua music campaign in 2019. “We cannot be Christians, Melanesians and humans and pretend that what is happening is not happening.”

With the widening reach of technology, it has become difficult to turn a blind eye. But like the episode with the latest video, the response is often a fleeting blink. People in PNG, like others across the region and across the globe who are privy to West Papua’s plight, empathise with their neighbours and send prayers or thoughts on social media. Only then, too often, they wait for the next social media post to distract them.

But there are lessons from other regional organisations in responding to a coup and political crisis.
Madeleine Nyst 30 Nov 2020 13:00

By refusing to concede an election he has lost, the American president further undermines faith in the system.
Stephen Grenville 23 Aug 2018 14:45