Has Washington effectively set up a veto over Moon Jae-in’s efforts to improve relations with Pyongyang? 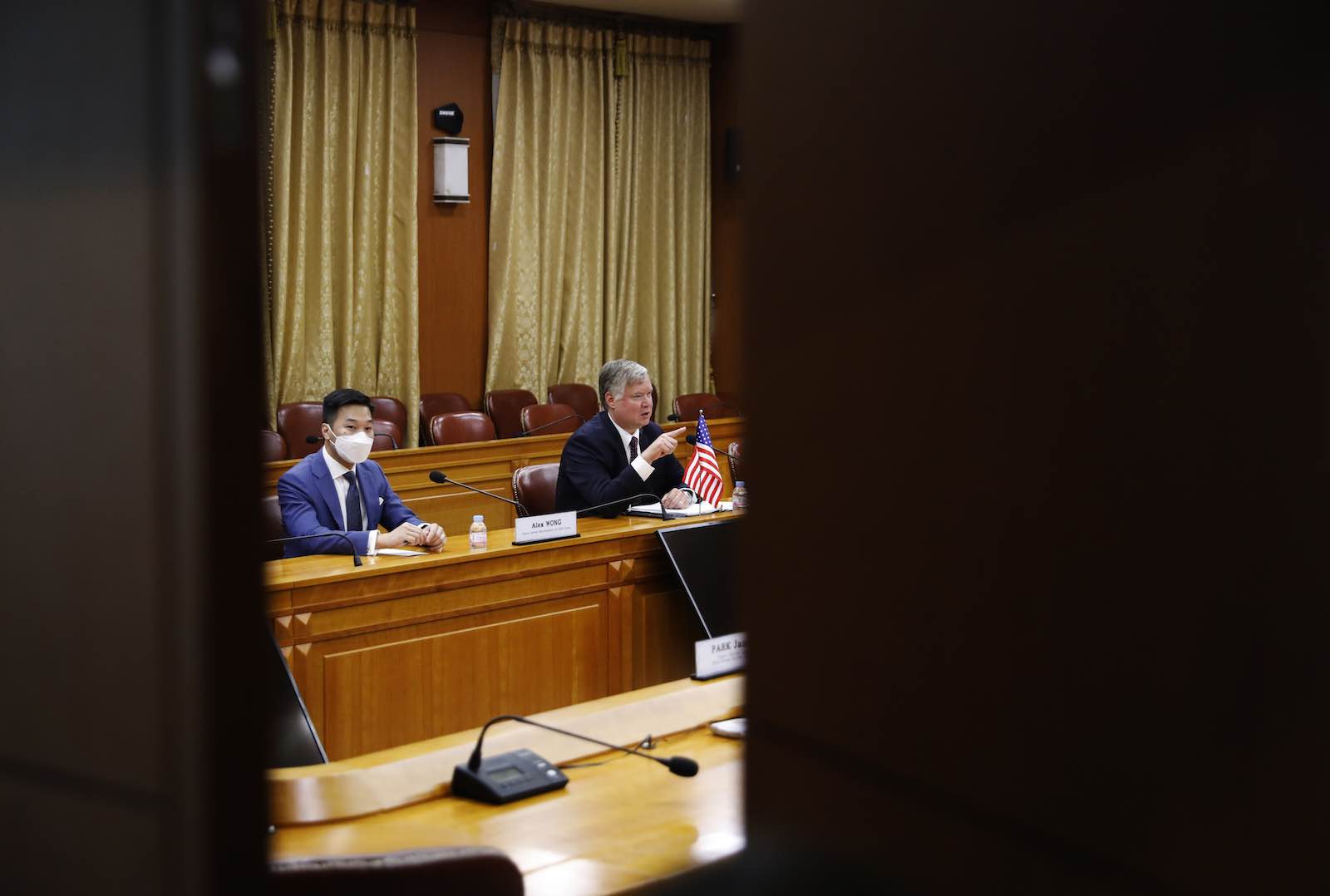 South Korea’s President Moon Jae-in’s appointment of new national security advisers has attracted attention, given their pro-détente stance in spite of North Korea’s latest provocations. The incoming team has rolled out an ambitious agenda to break the stalemate between the North and South ­– Moon’s new security adviser Im jeong-seok has urged more city-to-city exchange cooperation projects, while new Unification Minister Lee In-young has proposed a barter between the two Koreas to work around international sanctions. Lee also said he would not hesitate to meet North Korean Chairman Kim Jong-un to resume talks.

Unfortunately, even as these advisers try to come up with “new and creative” solutions to build inter-Korean trust, they may not accomplish their goal.

The United States has long constrained Moon’s outreach to the North to ensure that Moon’s peace talks do not stray too far from US denuclearisation goals. This is achieved via intra-alliance consultation measures, the most notable of these being the “US–South Korea working group”.

This working group was created in November 2018 after a series of high-profile summits, including US President Donald Trump’s meeting with Kim in Singapore and Moon’s own direct talks with the North. On the US side, the group is made up of Special Envoy for North Korea Stephen Biegun and officials from the State Department, Treasury and White House National Security Council. The South Korean side is led by Lee Do-hoon, special representative for Korean Peninsula Peace and Security Affairs, along with officials from the Foreign Ministry, Unification Ministry and the Blue House National Security Office. Washington and Seoul pledged the group would meet regularly, both in person and via video conference, and the group has met at least six times.

The intended aim of the working group was to focus coordinating efforts to achieve “the final, fully verified denuclearisation” of North Korea. Yet the outcome has been essentially to limit Seoul’s policy options with Pyongyang. Before its establishment, some in South Korea were worried that the group might increase US interference in Seoul’s North Korea policy, given the two sides of the alliance are not on an equal footing. This concern prompted special representative Lee to assure that the consultations would be “two-way”.

Former government officials in South Korea have openly questioned whether the working group is hindering efforts to improve inter-Korean relations.

Yet South Korea soon voiced concern that the group was more occupied with determining whether South Korea’s initiatives with the North violated sanctions, rather than coordinating the two allies’ policies. Recent media reports suggest the working group blocked a plan by the South Korean government to send 200,000 doses of antiviral Tamiflu to the North, for fear that such a move would violate sanctions. The group is also accused of interfering with South Korea’s efforts to reconnect railways and roads, as well as other joint Korean projects.

One of the more contentious episodes involving the group unfolded earlier this year, when Moon proposed resumption of independent tourism to North Korea, only for US ambassador to South Korea Harry Harris to remind Moon of the working group. Harris said Seoul “should take this idea they have and run it through the working group”. Amid local complaints, the US State Department issued a statement insisting that Harris respected South Korea’s sovereignty.

Still, former government officials in South Korea have openly questioned whether the working group is hindering efforts to improve inter-Korean relations. Ex-unification minister Jeong Se-hyun called for the group to be “disbanded”, while Moon’s former chief of staff Im Jong-seok said nothing could pass the working group unless Washington gave the green light. Lawmakers from Moon’s Democratic Party have also accused the group of “shackling” inter-Korean relations, while South Korean critics have gone even further, branding the working group a “new Governor-General of Korea”, comparing the US heavy-handedness to the experience under Japanese colonialism.

Moon’s perceived tilt towards Pyongyang after naming the new national security team will certainly increase the pressure on changing the inner working of the group. Unification Minister Lee has stressed the need to distinguish between what South Korea can do alone and what it can achieve via the working group. Lee also wants to forge ahead with humanitarian exchange independent of the working group. South Korea’s Foreign Ministry has announced discussions with the US on how to improve the group and to address public concerns regarding its operations.

The outcome of these talks will be a good measure of US-South Korea relations in the last two years of Moon’s term. A radical overhaul of the working group’s operation would signal Moon’s increased frustration with Washington and his determination to improve inter-Korean relations regardless of the US opinion. But a continuation of the past two years will show the junior ally is still contrained. In the end, Moon should prioritise reforming the operation of the working group before rolling out new North Korea initiatives.