Honiara as the smoke subsides

The riots in Solomon Islands this week follow a pattern of past unrest – yet with important symbolic differences, too. 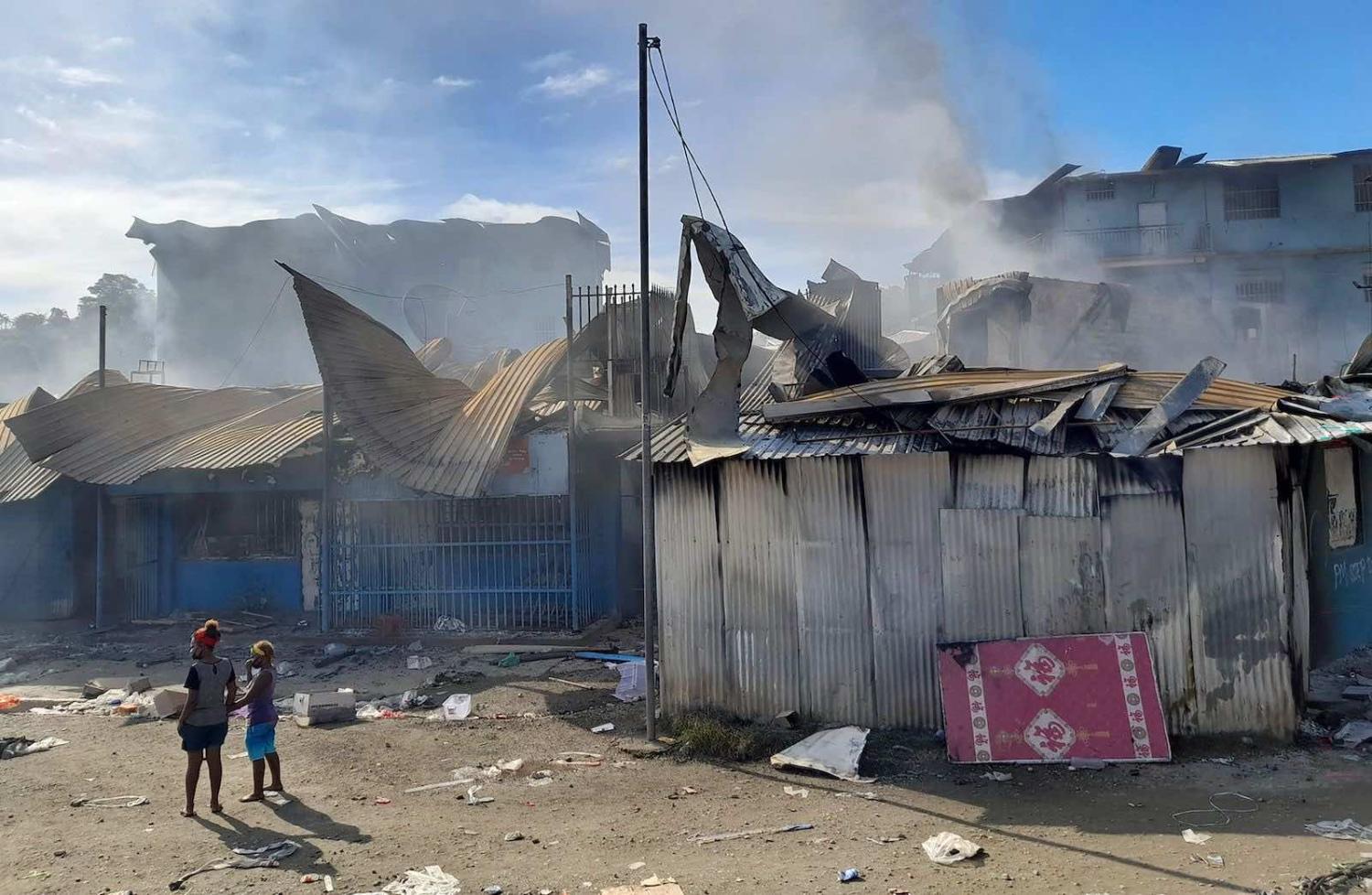 This morning the 36-hour lockdown imposed after rioting struck Honiara in Solomon Islands has lifted. The scene is a sorry one, buildings burned, debris on the main road, shops looted and exhausted police making way to work with the Australian Defence Force, which arrived last night.

Unfortunately, these scenes were predicted by myself and other analysts on the ground for some time. The last few weeks, dissent and dissatisfaction with the current government has been like a fog clouding everything. Indigenous business leaders were unhappy with the decision to award a major construction contract to an inexperienced operator from Asia. Others decried the decision of the government to spend millions on a questionable housing scheme run by another foreign investor, while ongoing concern about the state of the decrepit hospital continues.

At a live discussion at Solomon Islands National University last Wednesday, streamed online at a conference on environmental peacebuilding, leading national and regional academics broke down how foreign-controlled natural resource extraction was creating conflict in different provinces and deteriorating the quality of governance at all levels. Transparency International released a report stating Solomon Islands and Papua New Guinea were top countries in the region in terms of people’s perceptions the government is corrupt.

The unrest in Honiara started with a planned peaceful march to parliament by people from Malaita province to ask Prime Minister Manasseh Sogavare to step down. Malaita’s stand off with the current national political coalition is often depicted as a pro- versus anti-China issue, however, it also relates to different views about the roles of national government versus local government and the level of centralisation of powers. Prior to, and since independence of Solomon Islands in 1978, there have been calls for a decentralised system of governance with more autonomy to the provinces.

The request to ask Sogavare to step down follows a tradition of protest in Solomon Islands where when the country is in turmoil and there is wide dissent, leaders have resigned to appease their people and allow for some calm. Most notably, this happened after the 2006 riots when protests and riots followed the election of Snyder Rini, who stood down, and Manasseh Sogavare was then voted in by MPs for what would be his second stint as Prime Minister.

However, the riots this week have had some differences from previous ones that followed a pattern of arising at key moments of key political transitions, with specific targets, enjoying a degree of social support and serving a symbolic purpose. The first act of violence – the burning down of a hut made with wood and traditional leaf roof – provided a potent symbol of dissent against the current political coalition in power. The fire is reported to have started by some of the protestors breaking away from the leaders and running up the parliament hill. However, these initial protestors quickly dispersed and went home as police used tear gas. People gathered and mobs devolved into burning and looting of a set of random properties – first stores owned by people of Asian descent and then, as night fell and into the next day, the Honiara High School, seven locally-run businesses and a branch of the Bank of the South Pacific.

Unsustainable development puts an impossible burden on the police – as conflict factors escalate, police capacities have not.

As usual, men and women were seen carrying looted goods home from Asian-run stores. As anticipated, since these stores are no longer concentrated in Chinatown but throughout the city and peri-urban Guadalcanal, the police were unable to be at all the sites at once and control the situation. Royal Solomon Islands Police Force commendably stopped looting and destruction to property in the Honiara Central Business District, but it came at a huge cost to those running businesses at Ranadi, around the airport and in Chinatown without adequate security which were left to fend for themselves.

After offering no comment on the call to resign for three days, Sogavare refused to step down in a remotely-provided audio message last night. Prior to this, leaders called for a political solution can be brokered, including the Solomon Islands Chamber of Commerce, several provincial premiers, the Leader of the Opposition and others.

A few aspects are clear as the clean-up starts.

Firstly, the events illustrate the sense of exclusion of many from development in Honiara and Guadalcanal that arises from the retail, mining, logging and increasingly construction sector being dominated by companies and workers from Asia.

Secondly, this unsustainable development puts an impossible burden on the police, as conflict factors escalate, police capacities have not, and there is unaddressed problems of theft, gender bias and lack of accountability in the force.

Thirdly, commentators outside the Solomon Islands with an overly geopolitical frame on Solomon Islands conflict should be held in check. There is no evidence that China or US agents have had anything to do with the current violence.

Finally, a strategic approach by Australia and other donors that strengthen local checks and balances on power, such as the law, policing, provincial and local level governance, the media, civil society and civic education could provide some protection against a repeat of the destruction over the last few days.

Modi plays by the “rules” at Shangri-La

The Indian Prime Minister intended to reassure, and hinted only obliquely at some of the challenges confronting India and the region.
Khanh Hoang 16 May 2017 16:55

Private sponsorship and other pathways should be in addition, not an alternative, to existing refugee places provided by governments.
Greg Earl 15 Mar 2018 14:26