Beijing is fending off African resentment over debt and for importing workers – and facing extra competition, too. 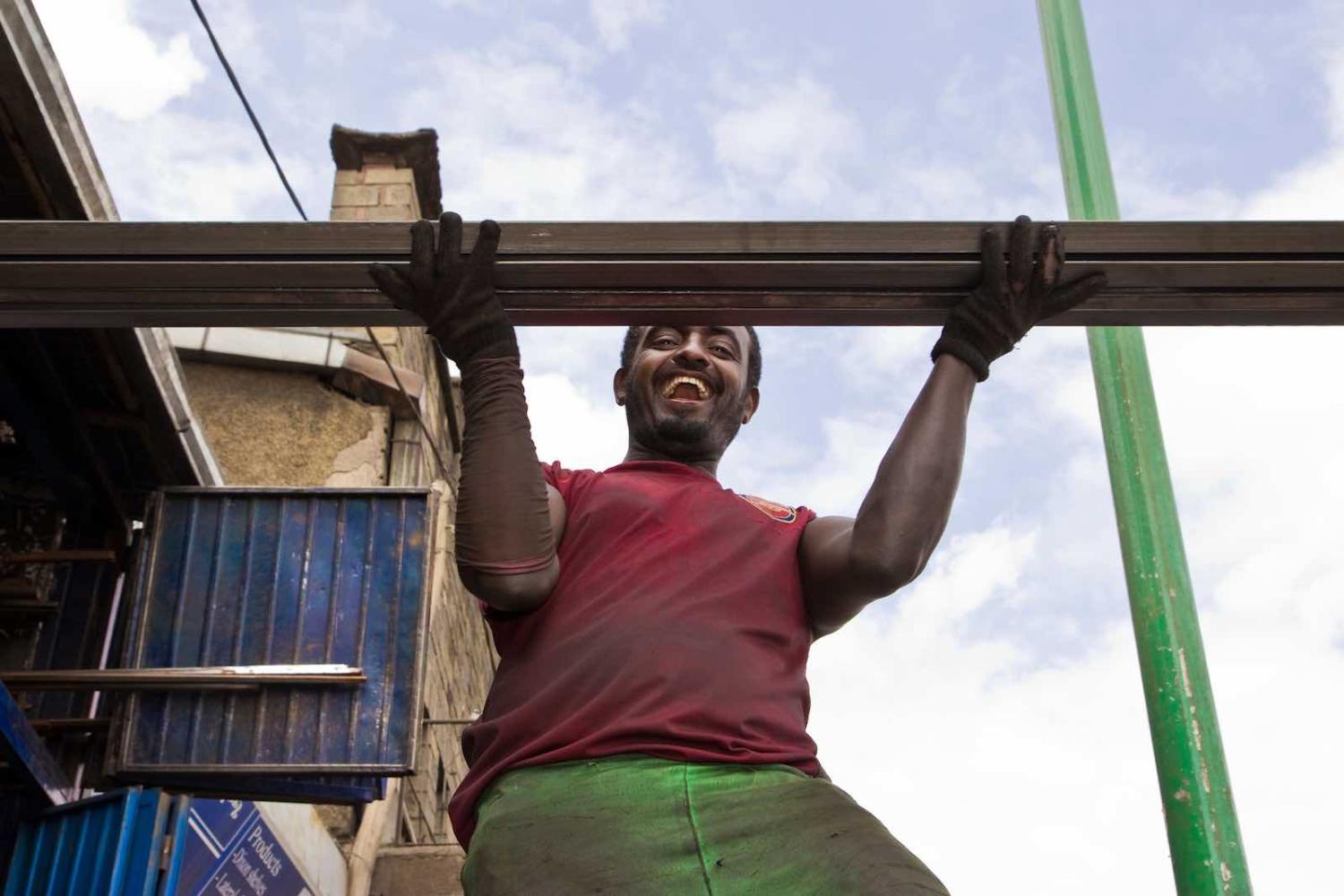 A building boom across Ethiopia is helping to fuel one of the world’s fastest-growing economies, growing at an average of 10% annually over the past decade (Photo: Simon Davis/DFID/Flickr)
Published 30 Oct 2019

If there’s any indication of how Africa is moving up on everyone’s agenda, look no further than the first edition of the Russia-Africa Summit, which saw 43 African heads of state converging last week on Sochi. Beyond the fact that the summit reflects the brisk trade Moscow does with the continent, it also demonstrates the growing confidence of African countries to branch out to partners beyond their former colonial masters and China. And Russia is not alone: Japan, India, and Turkey are all pushing hard to get a slice of the pie.

The scramble for Africa is so fierce that the world’s fastest-growing continent now stands at a unique crossroads: it has the chance to gain control over its own political development. Rather than passively getting caught in the age-old game of great powers, African countries could now leverage this renewed global interest to their strategic advantages.

Jumping into the driver’s seat

The Sochi summit saw the signing of $12.5 billion worth of deals – although most were simply memoranda of understanding that may never come to fruition. Putin predicted trade with Africa will double within the next “four to five years”, and leveraged the summit to expand exports of Russian weapons, nuclear technology, and secure drilling rights for oil resources. But Russia is one of the many countries seeking a greater share of the market.

In late August, Japan rolled out the red carpet for an equally impressive delegation of African heads of state, pledging $20 billion over a three-year period, following the TICAD summit in Yokohama. Previously aid-based, Tokyo’s relationship is now pivoting towards bilateral trade and multilateral economic partnerships. Its purportedly inclusive and sustainable approach focusing on human development and soft power is a much-needed counterweight to aggressive Chinese investments, often criticised as politically motivated, narrow-mindedly bilateral, or culturally insensitive.

Meanwhile, the European Union is fortifying its status quo as Africa’s largest green-field investor through a $46.6 billion investment scheme by the European Investment Bank, coupled with a regional goal of creating 10 million jobs over the next five years, via the Alliance for Africa, as well as a swathe of comprehensive economic partnerships.

A mere ten years ago, African countries were scrambling to get a piece of Beijing’s largesse: in a couple of decades, China had gone from being a marginal actor in the continent’s economic life to its biggest trading partner. With the Belt and Road Initiative and formerly the “Go Out” strategy, more than 10,000 Chinese companies – 90% privately owned – are now operating in Africa, and large settlements of Chinese entrepreneurs in places such as Nigeria and Senegal have followed them.

But that position is increasingly tenuous: Beijing is facing accusations of neocolonialism and of trapping countries in crippling debt. At the same time, Tokyo’s new initiatives and Brussels’ as well as Moscow’s renewed proposals for Africa have dealt a blow to China’s ambitions. The massive influx of funds and workers from China has led to increased anti-Chinese sentiment, and Beijing has yet to find ways to defend itself against accusations that its people exist in parallel societies in the host countries, independent of indigenous values and norms.

To that end, Chinese cultural programs embracing indigenous ways of life, such as tribal chiefdom in Nigeria, have been designed to counteract these anti-China sentiments. In terms of economic collaboration, during the 2018 Forum on Africa Co-operation, Xi Jinping brought up the concept of “forging alliance of corporate social responsibility” in introducing Chinese private investments, in an effort to compel Chinese firms into positive action.

Diversification and balance of power

While the growing competition in Africa is a way to push Beijing to adapt its ways if it wants to retain its African foothold, a critical time has also come for African host countries to harness these external interests toward sustainable outcomes. By marrying existing Chinese networks of free trade zones, commercial infrastructure, and human resources with other partners’ commitments to sustainable development, African countries can explore a new development model based on local know-how, innovation, and human capital.

For example, TICAD not only serves as a rival to the Forum on China-Africa Co-Operation, but also has the potential of fostering African partners’ governance capacity. Japan and the EU’s record of leadership in the international framework can help address the region’s record of corruption and burdensome red tape.

In Kenya, Japan’s new involvement is highlighted by financial assistance to civic participation and job training, innovative investments in the Olkaria I Geothermal Power Station, and official pledges of cooperation on infrastructure and economic transformation. For a country steeped in sovereign debt – a staggering $540 billion in August 2019 of which $6 billion to China – an external partner willing to upgrade its long-term structures provides a source of diversification, as well as new leverage for future negotiations. With an eagerness to reorient loan diplomacy to economic integration in its relationship with China, Kenya has taken concrete steps to adopt legal and regulatory reforms to nurture private-public partnerships with foreign investors and provide taxation incentives.

Beijing has yet to find ways to defend itself against accusations that its people exist in parallel societies in the host countries, independent of indigenous values and norms.

A convergence of soft power and value-added investments is also playing out in Senegal, as the country seeks major socio-economic restructuring under Macky Sall’s Plan for an Emerging Senegal. Japanese Prime Minister Shinzo Abe has promised to promote the Senegal-Japan Vocational and Technical Training Center and universal healthcare in August 2019. Chinese migrants have settled in Dakar, building a Chinatown, a Confucius Institute, a stadium, and a garment factory. The European Commission has also renewed a Sustainable Fishing Partnership Agreement with Senegal for a total of $9.4 million investments for the purpose of ecological preservation.

Senegal’s main advantage is its favourable legal framework and an active civil society. The country boasts a high level of political stability and political freedoms, reflected in smooth elections and improvement in societal issues, such as women’s rights and women’s participation in the workforce. Given its robust civil society, Senegal is better positioned to attract an expanding international presence to tackle looming dangers of a sovereign debt crisis resulting from previous overreliance on China.

Ultimately, African nations’ success in proactively capitalising on external inquiries is largely contingent upon their ability to improve governance capacity and civic engagement to better weather external influences. For a continent with a $68–$108 billion annual shortage in infrastructure investments and facing rapid population growth, it will be critical to adopt business-friendly approaches – slashing regulatory hurdles, curbing corruption, lessening macroeconomic volatilities, and encouraging technological leapfrogging. Under such forecasts, a win-win-win scenario is possible in African countries’ engagements with China, Japan, Europe, and beyond.

Donor countries, be it Australia or China, illustrate their regional interests by where they choose to put their cash.
The Interpreter 6 Feb 2020 15:00

Public attitudes towards China and its leadership have shifted over the years. Coronavirus could push the trend further.
Rahul Jaybhay 30 Jun 2020 06:00

The plan to transport oil across the Himalayas is a logistical nightmare. Post-Covid economics will make it even harder.