Australia has a growing personal connection to the South American giant, with diplomatic ties yet to catch up. 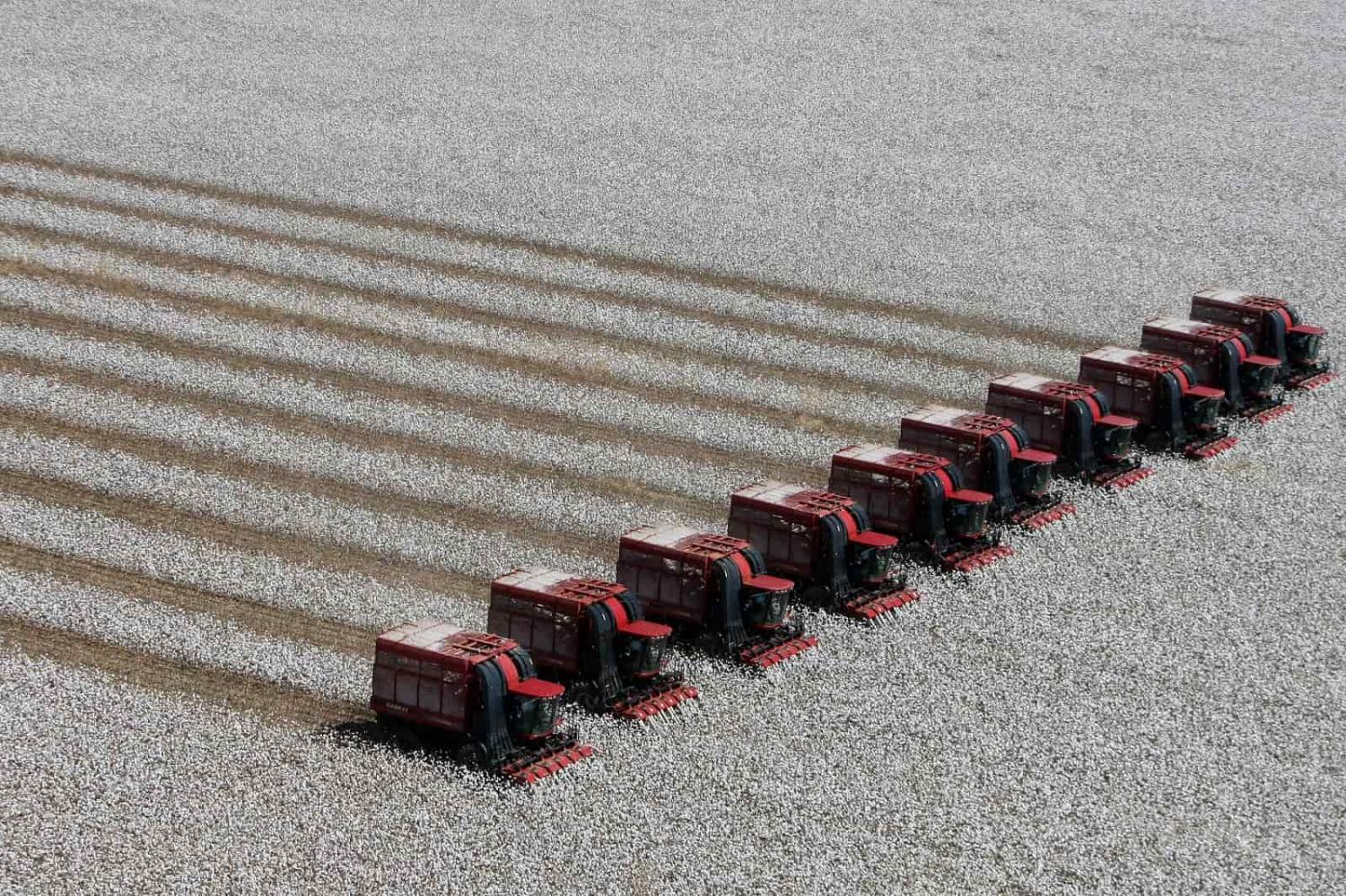 It’s a number that has almost doubled in the last five years alone. Today, more than 50,000 people born in Brazil call Australia home, according to the census results released this year. To get a better sense of the growing scale, in the mid-1990s the total number of Brazilians living in Australia barely nudged 3500.

“So, this is huge, this is a trend,” says Mauricio Carvalho Lyrio, Brazil’s ambassador in Australia. “Australia exerts well a wonderful fascination among Brazilians.”

And Lyrio would love to bring this flourishing migrant story to the attention of Prime Minister Anthony Albanese, seeing a chance to build ties between two countries that haven’t historically been especially close.

“Of course, 30 minutes with the Prime Minister would be a very special privilege that we all as ambassadors where we represent our countries would love to have,” he says.

In the year before Covid, Brazil had risen to become Australia’s largest source of international students outside Asia – ranking fourth overall.

Lyrio is speaking with me as part of a series of interviews in The Interpreter to highlight which issues foreign envoys would raise if given the chance for a brief meeting with the Prime Minister.

Albanese is a man very much in demand, having only a few months ago won an election. Brazil, meantime, is deep in its own election campaign, a contest between two towering personalities, former president Luiz Inácio Lula da Silva and incumbent Jair Bolsonaro.

That leaves Lyrio with the pressing job of ensuring those eligible Brazilians in Australia have a place to cast a ballot ahead of voting in October.

“This is a symbol that the presence of the Brazilian community here is very important,” he says. “We are going to have electoral stations in five cities in Australia – in Canberra, Brisbane, Sydney, Melbourne and Perth.”

In the year before Covid, Brazil had risen to become Australia’s largest source of international students outside Asia – ranking fourth overall. It marks a further example of “people-to-people” links so often cited as the ballast for stronger bilateral relations.

“You know, we are the two largest countries in the southern hemisphere, we have continental dimensions, the two of us, even the size of the territory for Brazil and Australia is very similar,” Lyrio says. “We produce lots of things in common in the fact that we are major powerhouses in agriculture, energy and mining.”

But those similarities in production do present something of an obstacle to forging closer economic bonds. While two-way investment between Australia and Brazil is considered roughly compatible with the size of the respective economies, trade has languished. “We do not need to import what the other country is good at exporting.”

“I think cooperation should be less occasional, less spontaneous, and more structured.”

“The simplistic view would indicate that Brazil and Australia are competitors, but I don’t see it that way,” Lyrio says. Instead, he proposes that the two countries share the lessons learned in their common experience, perhaps with a regular ministerial dialogue, focused on agriculture and mining. As he explains, I wonder if this could be formalised in a “2+2” type arrangement – an annual meeting not of foreign and defence ministers, as has become common for Australia with countries such as the United States, the United Kingdom, Japan and most recently India, but instead via the agriculture and resources portfolios?

Lyrio is pragmatic. If not ministerial dialogue, he says, at least the undertaking should be at a high level. “I think cooperation should be less occasional, less spontaneous, and more structured.” While a free trade agreement isn’t on the agenda (“this is not something confidential, it’s normal that countries have their priorities”), his personal priority would be to negotiate an agreement with Australia to prevent companies from paying double taxes.

The two countries are members of the Cairns Group of 19 agricultural exporting countries pushing for trade liberalisation. But Lyrio would like to see Brazil and Australia working together on sustainability issues, especially as concern for the environment comes ever more into focus. 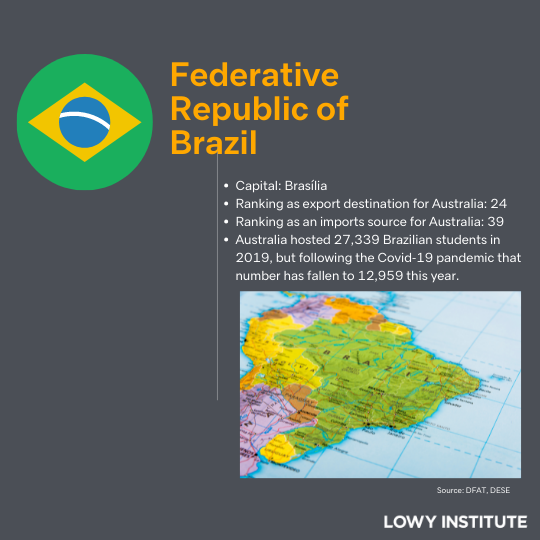 “Deforestation is the main challenge of Brazil,” he says. “It’s not easy to control. Almost half of our territory is rainforest, the Amazon … You can imagine that it’s more or less half the territory of Australia, and with a country like ours, with 220 million people, and a high percentage of poor people trying to make their living close to the forest.”

But he says it would be a mistake to allow agriculture to be demonised as a burden for the environment. Rather, he’d like the chance for Australia and Brazil to work together to promote sustainable farming practices globally. He tells of a visit to Western Australia earlier this year, seeing the adoption of a no-till practice of sowing crops, learning from a method commonly used in Brazil that limits the amount of digging and keeps carbon dioxide in the soil.

“We have such productive agriculture per hectare, without subsidies, most of [the farms] very sustainable in terms of production. That’s the benefit that Australia and Brazil are providing, in terms of feeding the world population, making the price of food affordable.” 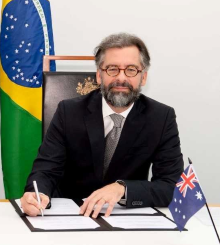 Lyrio, pictured, points to Brazil’s energy mix and the development of renewable sources of power as a further opportunity for sharing expertise with Australia. Whereas Brazil is blessed by the amount and volume of rivers in the country, with hydropower providing three-quarters of electricity supply, Australia predominately depends on fossil fuels. Ambitions are also growing for hydrogen investments.

The two countries are also G20 members but have intriguingly different diplomatic alignments within that forum. While Brazil has the BRICS – joined with Russia, India, China and South Africa – Australia sits with MIKTA – Mexico, Indonesia, South Korea, Turkey – and sometimes the traditional G7 nations.

“In big global and political issues, despite the fact that we pertained to different groups at times, we are in many groups together.” He again points to common interests in trade, as well as the drive for nuclear disarmament. “I would dare to say that Brazil and Australia share much more values in terms of the multilateral agenda than our countries share with big powers.”

This extends to Russia following the invasion of Ukraine.

“Some countries adopted economic sanctions against Russia and some others didn’t. Since Brazil is against unilateral sanctions without endorsement by international organisations, Brazil did not adopt sanctions against Russia, but at the same time, Brazil and Australia are very respectful [and] supportive of the UN Charter and against any violation of it. That is why Brazil voted against Russia in the United Nations both in the General Assembly and in the Security Council.”

“As middle power countries, if we can use this bit of an antiquated term, we have the interest of strengthening the rule of law in international relations, making international organisations stronger.”

Locking off waters to protect biodiversity won’t work without recognising that fish don’t care for the lines on a map.
Adam Lockyer 2 Aug 2022 19:00

The speaker has a long history of standing against Beijing. But Asia’s balance of military power has changed.
Nick Aspinwall 2 May 2019 06:00