“Quad” partners they may be, but the US is performing a delicate dance around its human rights concerns in India. 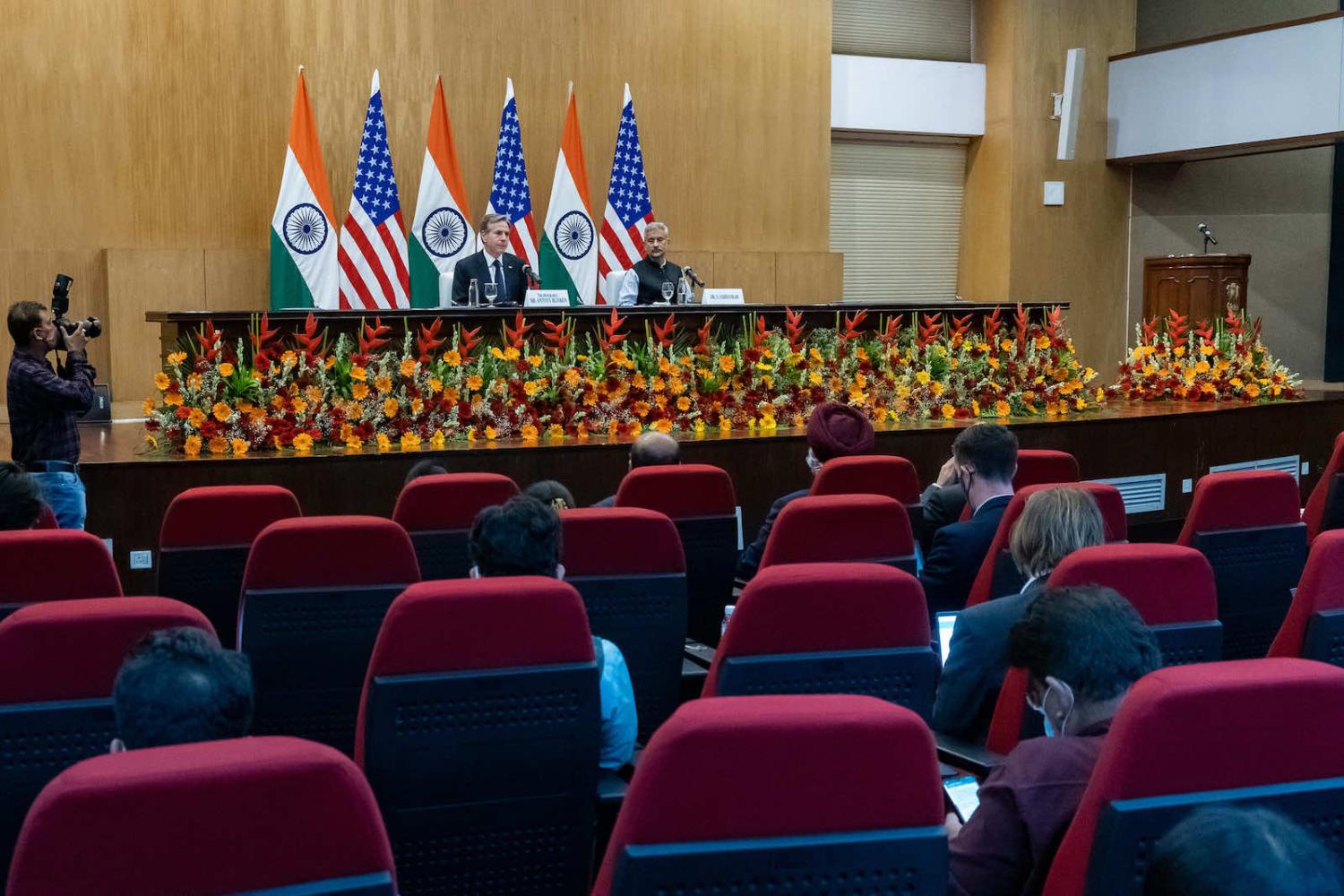 Diplomatese papered over the political turbulence in India during US Secretary of State Antony Blinken’s two-day official visit to the country on 27 and 28 July.

Narendra Modi’s government has been stigmatised not only by the Indian public and the opposition parties for its excesses against citizens, but by the US State Department itself through its scathing 2020 Country Reports on Human Rights Practices submitted to the US Congress in April.

However, at a news conference following his talks with External Affairs Minister Subrahmanyam Jaishankar, Blinken spoke of “shared values” of democratic freedoms and remarked that “democratic values and free citizenry bind India and the US together”.

Addressing a question on whether he had referred to the “backslide” in India’s human rights record during his talks with Jaishankar, Prime Minister Modi or National Security Advisor Ajit Doval, Blinken noted: “The relationship between our two countries is so important and so strong because it’s a relationship between our democracies, and, at its core, a relationship between our peoples. And I think one of the elements that Americans admire most about India is the steadfast commitment of its people to democracy, to pluralism, to human rights, to fundamental freedoms.” He pointed to the free press and independent judiciary as part of the “self-righting mechanisms” that he said could repair challenges to any democracy.

The “Country Report” on India by his State Department’s Bureau of Democracy, Human Rights, and Labour had, however, stopped just short of accusing the Modi regime of crimes against humanity when it recorded:

Significant human rights issues included: unlawful and arbitrary killings, including extrajudicial killings perpetrated by police; torture and cases of cruel, inhuman, or degrading treatment or punishment by some police and prison officials; arbitrary arrest and detention by government authorities; harsh and life-threatening prison conditions; political prisoners or detainees in certain states; restrictions on freedom of expression and the press, including violence, threats of violence, or unjustified arrests or prosecutions against journalists, use of criminal libel laws to prosecute social media speech, censorship, and site blocking; overly restrictive rules on nongovernmental organizations; restrictions on political participation; widespread corruption at all levels in the government; lack of investigation of and accountability for violence against women; tolerance of violations of religious freedom; crimes involving violence and discrimination targeting members of minority groups including women based on religious affiliation or social status; and forced and compulsory child labour, as well as bonded labour.

The report also noted that “a lack of accountability for official misconduct persisted at all levels of government, contributing to widespread impunity”. It moreover observed that religious freedom in the sensitive border Union Territory of Muslim-majority Jammu and Kashmir had been marred by restrictions on freedom of movement and assembly, and the 18-month internet shutdown.

The concluding day of Blinken’s visit was incidentally marked by what many felt was yet another assault on democracy when a judge, Uttam Anand, from the state of Jharkhand, was killed by a vehicle while out for morning exercise in a hit-and-run that was caught on camera. The judge had been presiding over a series of prominent cases including the alleged murder of an associate of a legislator from India’s ruling party BJP. Anand’s death has set off duelling claims about what role the case may have played in his death, even as the judge’s family has held the police complicit for initially registering the case as an accident, believing evidence suggests it to be a conspiracy.

Blinken’s visit was largely exploratory and intended to closely evaluate the Indian government and its workings.

There was also turmoil in India’s parliament during Blinken’s sojourn, with an inflamed Congress opposition reacting to reports on the government’s use of Israeli company NSO Group spyware, exposed by what has been called the Pegasus project, to target select Indian citizens, including political opponents, parliamentarians, journalists, and activists. Opposition leader Rahul Gandhi accused Modi and Home Minister Amit Shah of “[hitting] the soul of India’s democracy” by using Pegasus as a “weapon against its own people”, and then disallowing discussions on the issue in parliament.

Blinken likely brought up these or related issues in his in camera talks with Indian leaders, because Jaishankar subsequently told the media that he had responded to US concerns on the issues with a number of points, making it clear that the “quest” for a more perfect democracy applied to both the US and India. Jaishankar added that the Modi government’s policies “in the last few years” were to “right wrongs when they have been done, including historically”, and that while freedoms are important, they should not be equated with “lack of governance”.

The Biden administration appears to be yet weighing the odds on defining its partnership with India that had been marked by volatility under the mercurial leadership of Donald Trump. The American leadership has long extolled the 2.7 million-strong Indian diaspora in the US, marked by the emphasis on the background of Kamala Harris as the first US Vice President of Indian, and Asian, origin.

Harris, however, was critical of the situation that emerged in Jammu and Kashmir after the revocation last year of its statehood and special status. In February, her niece Meena Harris, a US-based lawyer and author, had sided with personalities such as singer Rihanna and climate activist Greta Thunberg in supporting the yet on-going farmers’ protests which have raged for much of the past year. The Indian government had castigated their stance. Biden, in turn, has been critical of the Hindu right-wing Bharatiya Janata Party (BJP)-led government’s Citizenship Amendment Act that seeks to disenfranchise select minorities and deport them.

In a letter to Blinken, the International Press Institute, a global media network founded in 1950 at “your alma mater Columbia University” to defend press freedom, requested the Secretary of State to publicly express concern over the declining press freedom and harassment of journalists in India, to demonstrate to its government that the international community has not turned a blind eye to the sordid developments in the country. “The government of Prime Minister Narendra Modi has displayed complete intolerance to criticism and resorted to legal harassment to punish those journalists and media organisations who are critical of its policies,” the letter said.

With no strategies or joint initiatives announced, it was clear that Blinken’s visit was largely exploratory and intended to closely evaluate the Indian government and its workings. The “vital India-US relationship” was characterised more as “work in progress” than one that set the stage for a transformative alliance.

Previous Article
Keeping PNG connected by investing in radio
Next Article
Man on a mission: Biden’s withdrawal from Afghanistan

Cooperation on humanitarian assistance is an alternative channel for the two sides to build trust and generate goodwill.
Greg Earl 9 May 2019 15:00

In a kaleidoscope country, India boasts its democratic culture is holding up well compared with London and Washington.
Denise Fisher 9 Mar 2018 10:30

Emmanuel Macron will visit New Caledonia in May, amid increased tension as the territory’s November deadline for an independence referendum nears.