The Irrepressibles tame the Invincibles in their impregnable fortress

A transformative cricket series will do more to strengthen Australia–India bonds than any amount of public diplomacy. 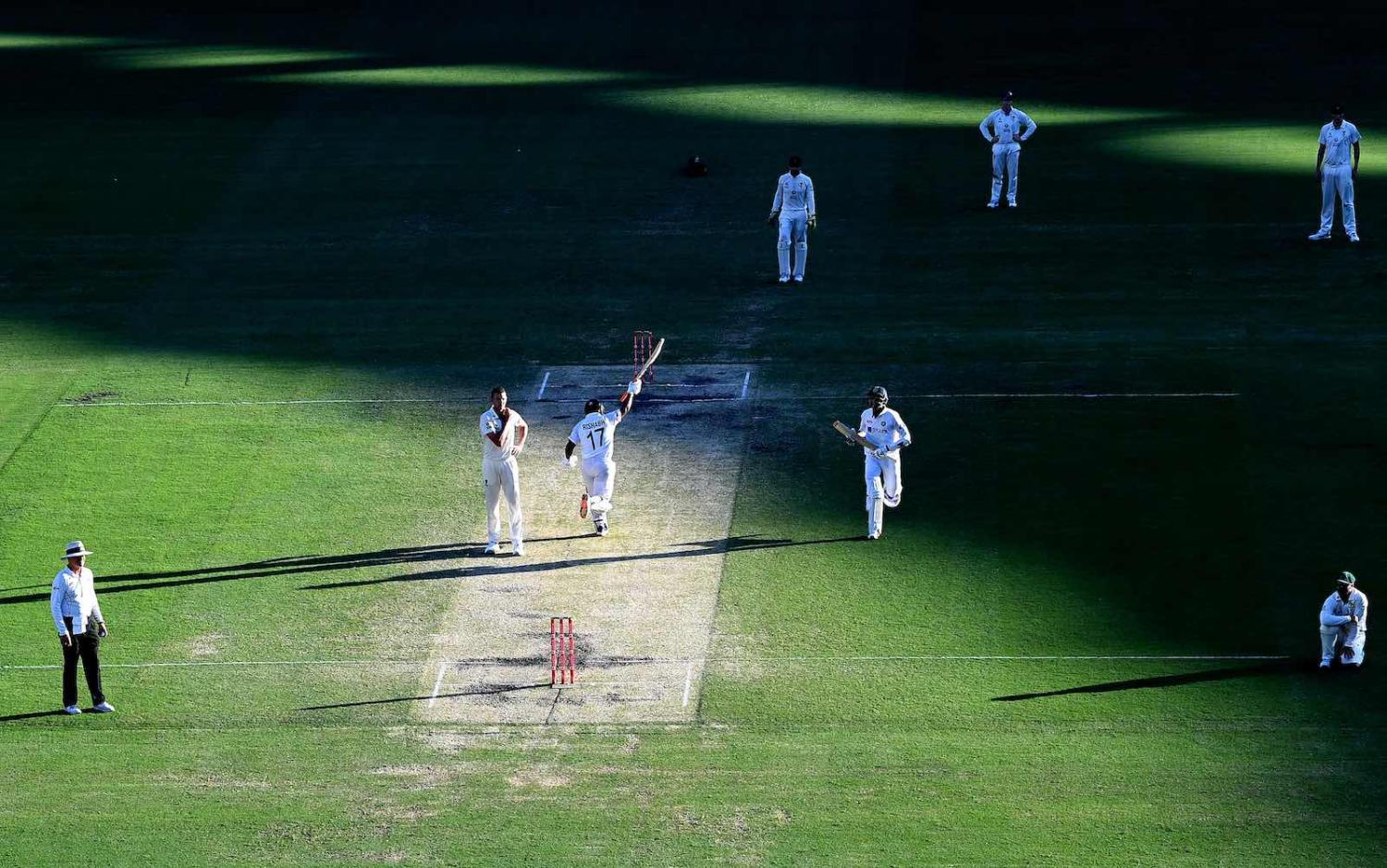 Rishabh Pant and Navdeep Saini of India celebrate victory after day five of the 4th Test Match in the series between Australia and India at The Gabba on 19 January 2021 in Brisbane, Australia (Bradley Kanaris/Getty Images)
Published 20 Jan 2021

Bliss it was to be a cricket aficionado in Australia at dusk yesterday as the shadows lengthened at the Gabba and the players were bathed in soft golden sunlight. To be an Indian fan was pure heaven. We are resigned to heartaches as a staple diet. But once in a while, the gods smile, all is good in heaven and the team delivers a sunbeam of a smile to every Indian cricket lover, all 1.3 billion of us. More prosaically, the series just concluded will do more to strengthen Australia–India bonds than any amount of public diplomacy by the two governments.

This was India’s finest overseas series win and possibly also one of the best away series wins by any cricketing team. Consider the totality of circumstances: the freakish debacle of the first test in Adelaide when India were bowled out for 36, their lowest ever score; their talismanic captain and one of the world’s top three batsman going home after Adelaide for the birth of his first child; the backdrop of a raging global pandemic and the mental strains of the resulting quarantine requirements; numerous injuries; one of the replacement bowlers injured early in the last game and another staying on at the cost of missing the birth of his first child; and all four tosses lost.

Batsmen win matches and bowlers win series. In India’s case, incredibly, not a single frontline bowler played in Brisbane while all Australia’s first-choice bowlers did. Yet it was Australia that failed to bowl out India twice.

Remarkably, this was the first time in decades that a four-test series had gone to a decider in the final test, at a venue where Australia last lost a match in 1988. This is also, of course, the venue of the Australia–West Indies match that finished in the first ever tie on 14 December 1960 (with the second tied test being the Australia-India match in Madras in 1986).

Fittingly, the humdinger of an entertaining series ended with a spellbinding cliffhanger of a finish. A draw would leave the trophy in India’s hands and so the pressure to push for a victory was greater on Australia. When the final session began, India were 187/3 chasing 328. As journalist Gideon Haigh puts it, India didn’t so much chase as stalk the victory target softly and stealthily. The popular WinViz app assessed India’s chance of victory to be just 1% at lunch and 16% at tea. In the 37 overs of play that remained, India needed 145 more runs to win, Australia needed seven wickets. All four results were still possible: victory for Australia or India, a draw, or a tie. All were still possible at the start the last hour of the match before India chased down victory with three overs left.

In the key moments that mattered, Australia were found wanting, outplayed by an unexpectedly tough Indian side that was hungrier for a thrilling victory rather than settling for a tame draw that would see them retain the trophy. They showed they were up for the fight, took the game on and deserved to win. “This is a magic, magic moment for India,” cricketing great Sunil Gavaskar exulted, the Indian half of the Border–Gavaskar trophy: “Young India has done it. Young India has shown the way. Young India has shown it was not afraid.”

With his fierce competitiveness, on-field aggression, application, mental toughness and attention to physical fitness, India’s captain Virat Kohli is “the most Australian non-Australian cricketer of all time”, said onetime Australian captain Greg Chappell. Kohli has spearheaded India’s rise to world dominance by channelling that inner Australian spirit and challenging his teammates to do the same. No Indian can pay Australia a higher tribute.

India is the financial powerhouse of contemporary cricket and the $10 billion Indian Premier League recruits star players, coaches and commentators from the world (Pakistan excepted). This has been hugely beneficial in breaking down barriers between players from different countries, promoting an understanding of different cricketing cultures and fostering the spirit of comradeship among the cricketing fraternity.

Indians gained much respect from Australians for picking themselves off the floor of the first test debacle in Adelaide to defeat Australia comprehensively in the Boxing Day test in Melbourne and then again to hang on stubbornly for an against-the-odds draw in Sydney. In the latter captain Tim Paine famously said to Ravi Ashwin at the crease “See you at the Gabba”. Ashwin didn’t play at the Gabba but he was there to savour India’s triumph. Having dropped a few, Paine would do better to forget the sledge and focus on the edge.

There were many acts of individual brilliance, but these rotated among different players instead of one person dominating. This was truly a team effort.

Ignore the few louts among the spectators who taunted India’s boundary riders with racist abuse. The authorities dealt with them promptly and ejected them from the grounds. The live TV commentators, print journalists and fans have been unqualified in their praise of the resilience, grit, character and grace of the team and the calmness, dignity and tactical nous of Rahane as the stand-in captain. He is yet to lose a match as captain.

The highest previous successful fourth innings run chase at the Gabba was 236 back in the day in 1988. There were many acts of individual brilliance, but these rotated among different players instead of one person dominating. From Rahane’s brilliant century in the Melbourne win, to Pant’s scintillating 97 and Ashwin’s and Vihari’s gutsy grind in the Sydney draw, to Gill’s classy 91, the stubborn Sundar-Thakur partnership in the first innings and in the second, the painful blows absorbed by Pujara, Siraj’s maiden five-wicket haul and Pant’s beautifully paced unbeaten 89 in Brisbane, this was truly a team effort.

When the Indian national anthem was sung at the start of the third test match in Sydney on 7 January 2021, TV cameras zoomed in on the face of Mohammed Siraj, the son of an auto-rickshaw driver from Hyderabad playing in his first series in national colours. He had stayed on in Australia rather than return home after his father’s death in order to fulfil his late father’s dream and was the target of racist taunts by a few louts. Teardrops fell silently down his eyes as the emotional weight of the symbolism hit home. That is as good an image as any to serve as an epitaph for this transformative series for the ages.

Previous Article
Iran nuclear deal: Revenge of the diplomats
Next Article
Where in the world is Jack Ma?

The tremendous impact of a US-China investment and technology war

The impending bifurcation of the world internet economy will disrupt many industries, companies and national economies.
Khang Vu 7 Feb 2019 13:00

Trump and Kim Jong-un will meet in Vietnam, a backdrop with history for the US and promise for North Korea.

Timor Trough: the rumpled carpet on the sea floor

A Timor Sea maritime boundary beyond the median line was never reasonable.