If history is a guide, the interests of Korean victims, not US strategic goals, must be put first. 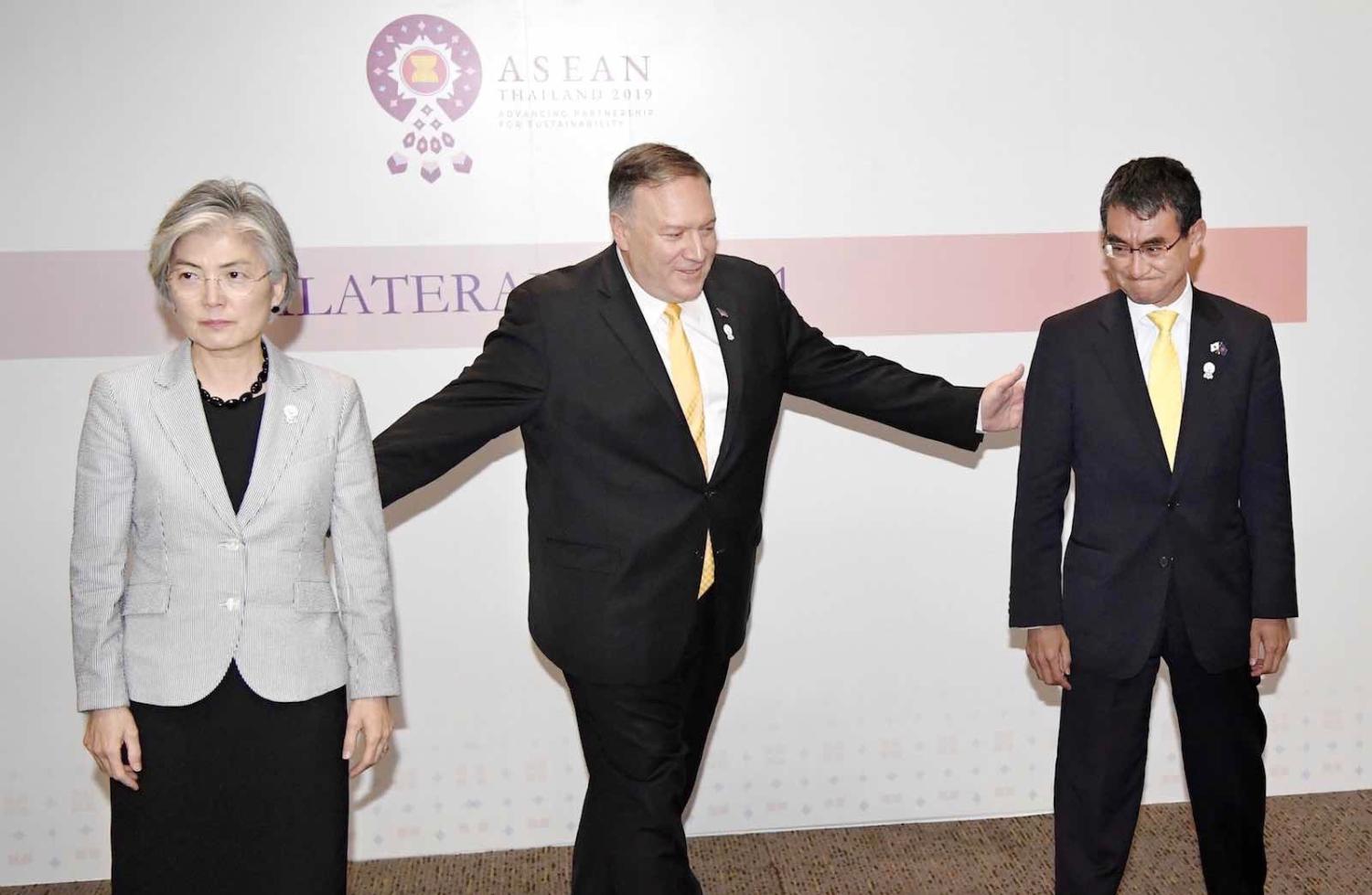 Already at its lowest ebb in decades, the Japan–South Korea relationship looks set to plummet further still. Leading this diplomatic descent are the perennial “history problems”, which have seen significant developments over the past year. Consequently, the issue of compensation for colonial-era Korean forced labourers has risen to the diplomatic fore and now stands alongside the hitherto more prominent matter of redress for former “comfort women”. As a side effect of these history problems, a bilateral trade war is gaining traction, and leaders Shinzo Abe and Moon Jae-in are now treading a slippery political slope.

Typically, when relations deteriorate between Tokyo and Seoul, their mutual US ally steps in. In the current dispute, however, Washington has uncharacteristically taken a back seat. President Trump affirmed that he would only mediate if requested to do so by Seoul and Tokyo.

Many analysts have read this decision as another troubling sign of US insouciance towards allies and have urged the Trump administration to assume the traditional mediator role. Yet in light of the history of US interventions in both Japan and South Korea’s colonial past, this is a rare example of Trump doing the right thing.

Washington has tended to misread the dynamics of colonial resentment and victimisation in South Korea, and it has underestimated the ability of victims and their advocates to shape and to undermine diplomatic outcomes.

Indeed, past attempts by Washington to intervene in Tokyo and Seoul’s history problems have been largely ineffective and short-sighted. They have also been characterised by a disregard for Korean victims and their conceptions of justice. Washington has tended to misread the dynamics of colonial resentment and victimisation in South Korea, and it has underestimated the ability of victims and their advocates to shape and to undermine diplomatic outcomes.

Take, for instance, the Korean forced labourers at the centre of the current dispute between Seoul and Tokyo. When the US-led allied occupation began in post-war Japan, these labourers desired nothing more than to be liberated and returned to their homeland, and were staging strikes towards this end. As documented by historian Matthew Augustine, however, US occupation officials decided to retain Korean labour in Japanese mines to fulfil the need for coal for the Allied armies and Japan. Chinese laborers and Allied POWs, on the other hand, were released. Only in the face of unrelenting protests did US officials eventually begin to repatriate the Korean labourers, in many cases months after the Japanese surrender in September 1945.

Then, in March 1946, American occupation authorities in Japan elected to mediate the problem of the labourers’ unpaid wages. For this purpose, they established a bank account in Japan and ordered Japanese corporations to deposit any outstanding wages for Koreans. Once the funds were deposited, however, the US withheld them on the grounds that it did not wish to be inundated with individual payment claims.

In June 1950, after the outbreak of the Korean War, the South Korean government asked US officials in Japan to transfer the wages owed to Korean labourers. After deliberating for months, the US denied the request on the basis that some of the labourers were by then in North Korea, and it would be too difficult to determine their whereabouts amid the upheaval of war. Consequently, the wages of both North and South Korean labourers were withheld.

Roughly a decade later, against the backdrop of the escalating Cold War, the US began ratcheting up its efforts to mediate the normalisation of South Korea–Japan relations. Washington’s primary goal on this occasion was not to realise a bona fide reconciliation between Japan and South Korea, but to secure a conciliation between its Northeast Asian allies that would serve to buttress the US strategy of containment, which aimed to limit Soviet influence and expansion. Washington encouraged Tokyo and Seoul to reach an expedient settlement, in spite of mass anti-treaty protests by Korean citizens and the use of martial law to suppress them.

The 1965 normalisation treaty that eventually emerged from this process was critical to the restoration of state-to-state relations and the fostering of bilateral economic ties. But it also institutionalised a lack of recourse for Korean citizens to exact justice from Tokyo (as well as Japanese companies) on their own terms.

In more recent times, Japan and South Korea enacted an ill-fated “comfort women” accord in December 2015. This state-centric agreement was essentially at odds with the demands of the victims and their advocates. Washington again had a hand in facilitating this accord by helping to extinguish ancillary fires in Tokyo-Seoul relations, and keeping the two sides focused on reaching a deal. This mediation was most likely predicated on paving the foundation for the subsequent passage of the General Security of Military Information Agreement (GSOMIA), a bilateral pact that enabled intelligence sharing on North Korea.

Evidently, Japan and South Korea are not in need of further “help” from their US ally in managing their historical past. What they require, rather, is a bilateral settlement premised on the interests of Korean victims – not on US strategic goals or the state interests of Japan and South Korea. Given that the current disputes over history are being driven first and foremost by Korean victims, the most appropriate solution would be a Track 1.5 diplomatic process that brings the victims, their advocates, and historical experts into official-level negotiations.

Any advisory role for the US in the current dispute should be limited to the strategic realm of Japan–South Korea relations. Washington could usefully encourage Seoul and Tokyo to silo their security and diplomatic relations, and urge them to renew the GSOMIA ­– which expires on 24 August. As history shows, however, it is well beyond the US diplomatic remit to navigate the complex terrain of Japan and South Korea’s history problems.

Analysts should be wary of using regional elections as a guide for the 2019 presidential race.
Xiao Tan, Leah Ruppanner, Rennie Lee 30 Mar 2021 06:00