In Myanmar, a unity still out of reach 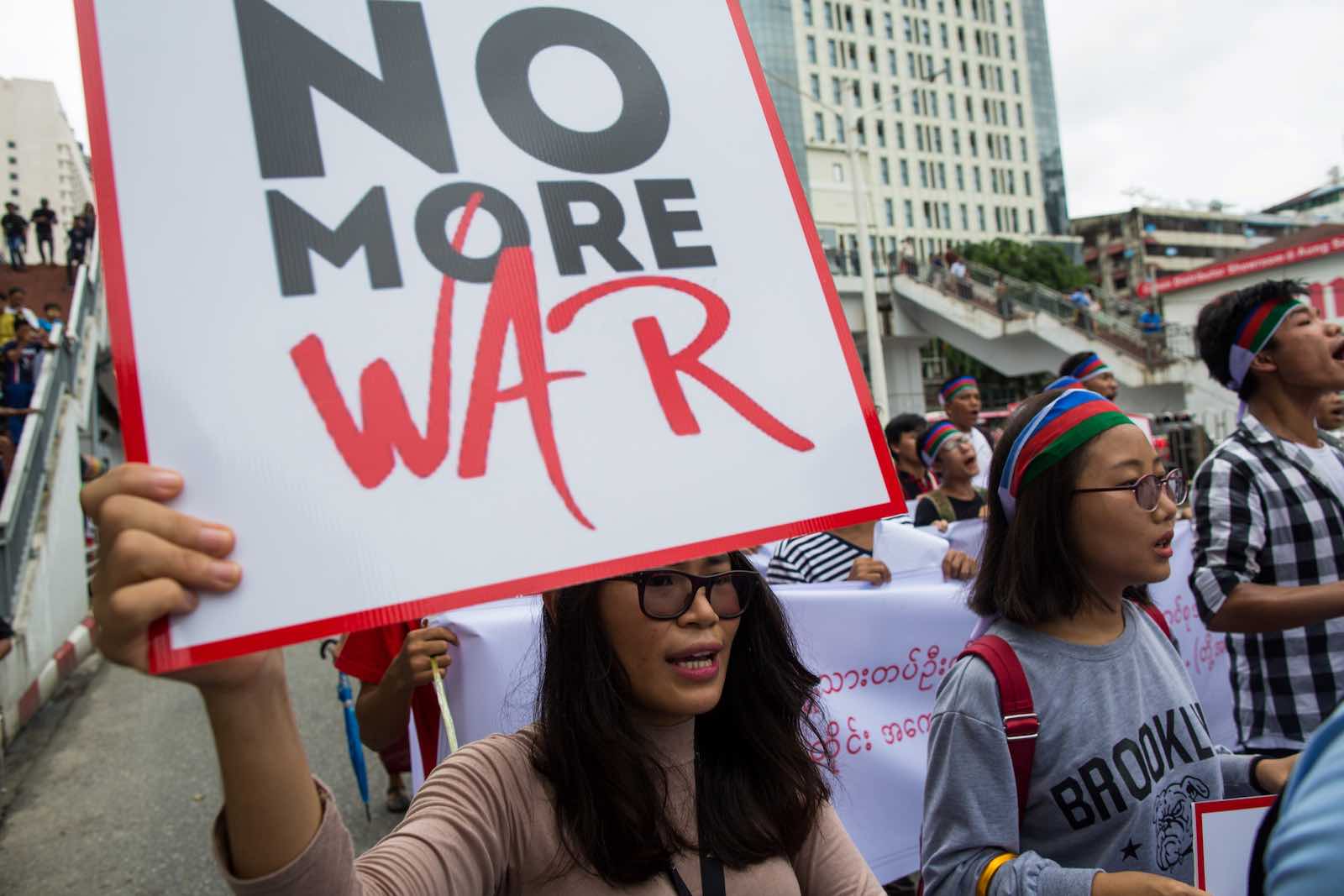 Ethnic Chin protesters in Yangon call for an end to fighting between the Myanmar military and the Arakan Army, July 2019 (Photo: Sai Aung Main via Getty)
Published 9 Aug 2019 06:00   0 Comments

In January 2018, the Arakan Army, the newest ethnic-based militia in Myanmar, released a video on YouTube and elsewhere of its cadres kitted out in camouflage, armed with modern weapons, and looking extremely disciplined.

“The Arakan Army are soldiers from the indigenous population of Arakan State. These soldiers, men and women, lay the groundwork for defence of their people and nation,” a message states alongside the video.

Arakan is the historical name for Rakhine, the Myanmar state whose northern region abuts the border with Bangladesh. Rakhine state has been ripped apart over the past seven years, first by sectarian violence fomented by radical Buddhist monks, and then by the country’s armed forces, known as the Tatmadaw. It remains one of the poorest regions of Myanmar, despite its extraordinary resource wealth.

Conveniently, Suu Kyi is refusing to engage with the Arakan Army as part of the peace process, knowing full well they would become yet another group officially refusing to play ball.

The 12-minute video was a clear statement of intent, a message to the country’s civilian and military leaders that it would take on the Tatmadaw, which it described as an “invader”.

And so it has transpired.

Since the video emerged, the Arakan Army has ramped up its operations, launching a string of increasingly deadly raids in both Rakhine state and Chin state to its north, and sparking concern across the border in Bangladesh and India.

Their emergence has put another spoke in Myanmar leader Aung San Suu Kyi’s troubled peace plan, known as the 21st Century Panglong Peace Conference, named after the project that was left incomplete when her father Aung San, the architect of Burmese independence, was assassinated in 1947. It also underscores the reality, seldom acknowledged, that the violence that has roiled the region – and has seen more than 700,000 Rohingya flee the country in the past two years – has not just two sides, but three.

The ethnic Arakanese, who are predominantly Buddhist, have been resisting outside rulers for centuries – against the Bamar of central Myanmar’s Konbaung Kingdom in 18th century, the British in the 19th century, and the Japanese during the Second World War.

Following Burma’s independence in 1948, they returned once more to conflict with the Bamar (the country’s dominant ethnic group), and increasingly with the Rohingya, whose numbers had increased under the British as they migrated from present-day Bangladesh in search of work.

The Arakan Army was formed in Myanmar’s north in 2009 with the apparent backing of the Kachin Independence Army (KIA), as well as the United Wa State Army (UWSA), Myanmar’s largest ethnic militia. Its fighters cut their teeth fighting in Kachin and neighbouring Shan state, in concert with the KIA, UWSA, and other smaller militias.

The group’s modern equipment and professional discipline, as well as the high production values of its video messages, has led more than a few observers to speculate whether it has the backing of elements in China, which lies to the north of the Kachin and Shan states. There are also reports it has sourced arms from the UWSA and possibly Indian hill tribe militias.

The aim of the peace plan is to finally quell the decades of on-again, off-again civilian wars that have torn apart the seven ethnic-based states that surround the centre of the country. The plan has been buffeted by the ongoing conflict in Kachin state and the Rohingya exodus – blame for both of which lies at the feet of the Tatmadaw, effectively the senior partner in an uneasy governing coalition over which Suu Kyi has no control.

Conveniently, she is refusing to engage with the Arakan Army as part of the peace process, knowing full well they would become yet another group officially refusing to play ball.

Peace was one of the central planks of Suu Kyi’s landslide 2015 election victory, but she has failed to build, in any meaningful way, on the start made by her military predecessor, President Thein Sein, who signed truces with a range of previously hostile militias. As a result, she has squandered a significant amount of goodwill in the ethnic states.

In turn, this failure has changed the political calculus in the country as it approaches the next poll, at the end of 2020. By-elections over the past two years have shown support in the ethnic states, including in Rakhine, drifting away from Suu Kyi’s ruling National League for Democracy (NLD) to more localized ethnic-based parties. These, in turn, are beginning to coalesce around an alliance of like-minded parties keen to push the NLD towards outright support for a truly federated model of Myanmar.

This vision, after all, was part of the original promise of Aung San – also undelivered. If his daughter can bring herself to back such a plan for the country, she might find that the peace process has a realistic path forward. Indeed, she should – politics, as they say, is the art of the possible, and embracing a broader coalition of parties is the surest way the NLD can keep control of the civilian government at next year’s poll and consolidate at least the beginnings of democracy.