A new “concert” to govern the Indo-Pacific

For Quad leaders emphasising an “inclusive” region, there may be a ready-made example for involving China. 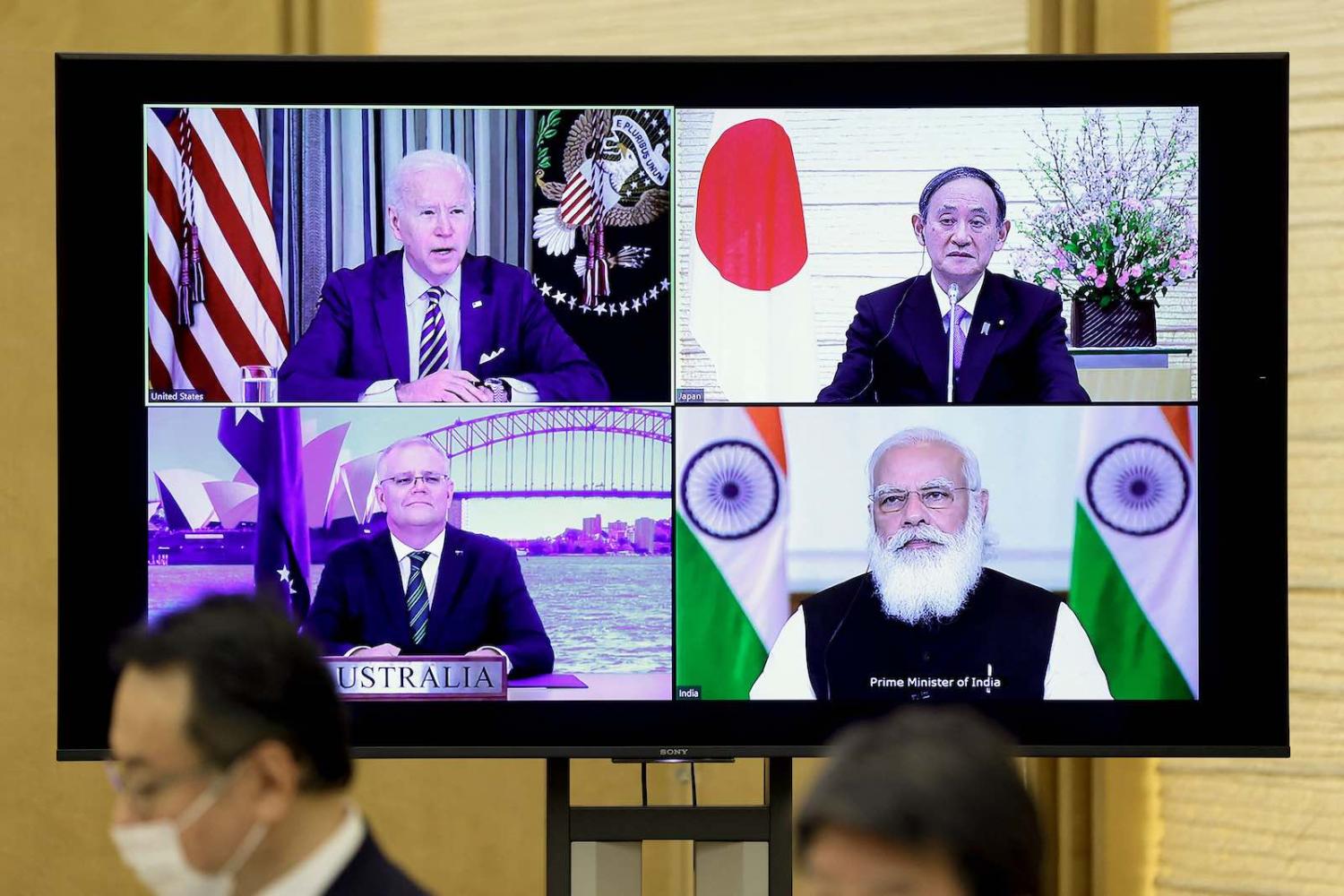 A monitor displays the leaders of the US, Japan, India and Australia during a virtual Quadrilateral Security Dialogue meeting, 12 March in Tokyo (Kiyoshi Ota/Pool/AFP via Getty Images)
Published 15 Mar 2021

The joint statement issued following the weekend meeting of the four “Quad” leaders was titled “The Spirit of the Quad”. This title could be read as either self-affirmation or self-praise. The Quad’s first summit of leaders was a somewhat informal affair, held virtually amid a global pandemic on 12 March (Washington time), with the promise that an “in-person” formal Quad leaders’ summit would be organised by the end of 2021.

However, the gathering was not necessarily a signal of a significant lift of the Indo-Pacific contest.

The joint statement twice used the words “inclusive” and “diverse”. The Indo-Pacific is characterised as “inclusive”, but the Quad itself is said to bring “diverse perspectives”.

I don’t know which country’s diplomats suggested this formulation of key words in the statement, but the expression is intriguing and worth examination. It reads:

We bring diverse perspectives and are united in a shared vision for the free and open Indo-Pacific. We strive for a region that is free, open, inclusive, healthy, anchored by democratic values, and unconstrained by coercion.

The statement goes on to acknowledge an ambition to see “the world’s most dynamic region … be the free, open, accessible, diverse, and thriving Indo-Pacific we all seek”.

It may be that the use of “diverse” actually exposes some differences or disagreements over issues within the Quad grouping.

After the meeting, the Quad leaders included the “inclusive” idea in a joint op-ed published in the Washington Post, suggesting an improvement or enrichment of the original “free and open Indo-Pacific” (FOIP).

Officially, China has yet to embrace the “Indo-Pacific” concept, still preferring to advocate the Asia-Pacific. But China has not neglected a de facto strategy of Indo-Pacific engagement.

The “inclusive” theme has been stressed by leaders from the Quad before. India’s Prime Minister Narendra Modi spoke on the “inclusive” concept at the IISSS Shangri-la Dialogue in June 2018, and India has pursued its adoption in many Asia-Pacific regional processes, with considerable success. While the joint statement also invoked the words “free and open Indo-Pacific”, a phrase frequently overemphasised by Japan under Shinzo Abe, “inclusive” may help make FOIP less confrontational, particularly with regard to China.

It was also notable that the Quad statement stressed the indispensable role played by the Association of Southeast Asian Nations in the Indo-Pacific, with the four leaders declaring: “We reaffirm our strong support for ASEAN’s unity and centrality as well as the ASEAN Outlook on the Indo-Pacific.”

The 2019 ASEAN Outlook on the Indo-Pacific was a collective response to the Quad’s “FOIP”. It was in fact a case of old wine in a new bottle. In discussing the “Indo-Pacific”, ASEAN did not abandon the concept of an “Asia Pacific”, where it has acted as a major driving force of economic opening and integration since the 1990s, but instead let its version of the Indo-Pacific run in parallel. It has been engaging Australia, India, Japan, the US and China simultaneously.

For the Quad leaders to emphasise ASEAN suggests an opportunity. ASEAN is actually an example of a successful and effective diplomatic concert – an effort to manage the challenge of diverse perspectives on common problems. ASEAN-centred dialogue processes have sought to create “a concert of Asia” or “a concert of Asia-Pacific” through the many associated initiatives, such as the ASEAN Regional Forum, the ASEAN plus meetings, or the Asia-Europe Meeting. These existing frameworks, processes, institutions and forums are relevant and useful as a regional community – and indeed they form strategic assets in governing the contest in what is now referred to as the Indo-Pacific.

So adopting the language of an “inclusive” region in statements such as that by the Quad leaders may help make a broader “concert of the Indo-Pacific” possible in the future.

Officially, China has yet to embrace the “Indo-Pacific” concept, still preferring to advocate the Asia-Pacific. But China has not neglected a de facto strategy of Indo-Pacific engagement. China is a signatory to the ASEAN-led Regional Comprehensive Economic Partnership trade deal (from which India unfortunately withdrew during the negotiations). And at the APEC meeting 2020, China announced it would “favourably consider” joining the Comprehensive and Progressive Trans-Pacific Partnership Agreement. China’s Belt and Road Initiative (BRI) also criss-crosses the region and beyond.

So China is already an Indo-Pacific power and would have no problem embracing this concept if framed in an inclusive fashion. The Quad has so far sought to manage its view of a “China challenge” by convergence. Yet it should be recognised that the inclusion of China in the Indo-Pacific by various regional and trans-regional arrangements helps in the prevention of conflicts. To exclude China, or other important Indo-Pacific actors, might have serious political and economic consequences: “new Cold War”, “decoupling”, de-partnership, de-integration and even “destined wars”.

It is interesting to see the new Biden administration develop the idea of a “foreign policy for the middle class”. Such a US domestic priority can be best achieved by an Indo-Pacific concert of powers – in a fashion similar to Deng Xiaoping arguing China needs “a peaceful international environment” to focus on economic construction. China’s subsequent integration into the Asia-Pacific made for a longer peace in the post–Cold War. That need for peace now covers the Pacific and Indian Oceans, not only for China, but the US as well in an era of tremendous challenges, internationally and at home.

In terms of real “hard” and “soft” power, China will not overtake the US in the future. The prospect of China as the largest economy around 2030, if realised, does not imply China becoming the world’s number-one superpower. China’s ageing demographic issues – as one population scientist put it, a “big country with an empty nest” – will weaken its power status and challenge China’s economy, society and relations with the world. Meanwhile India and Indonesia will enjoy population advantages.

Consequentially, the continuation of “strategic competition” in the Indo-Pacific needs a fundamental solution, which lies in a concert of Indo-Pacific actors, powers and stakeholders.

International Women’s Day is important: it’s what we do the other 364 days of the year that will eventually achieve genuine gender equality.
Christopher Snedden  2 Sep 2019 06:00