The hotline between Pyongyang and Seoul is operational again despite irritation at joint US military ops in the region. 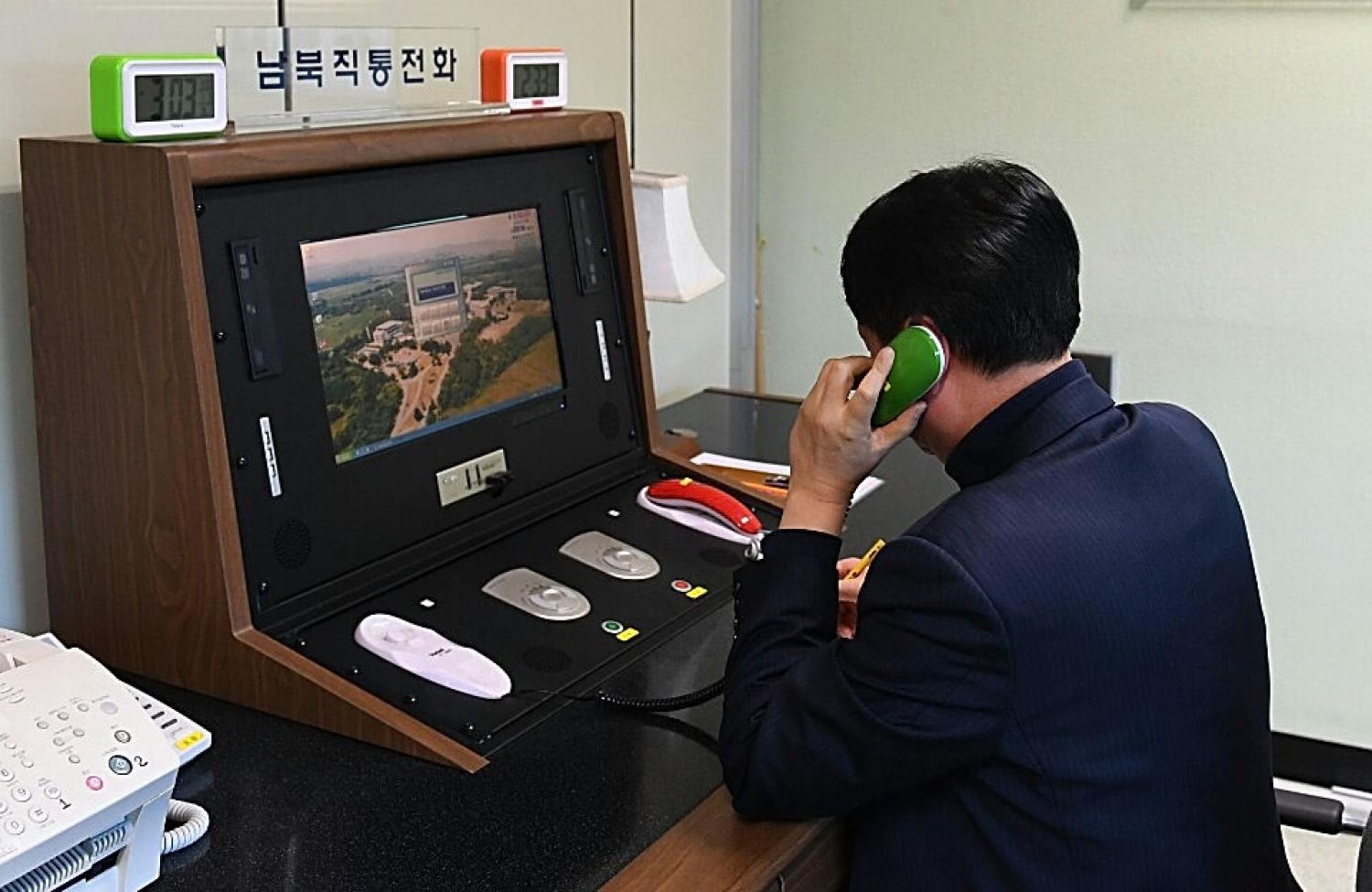 A South Korean official checks the direct communications hotline to talk with the North Korean side in 2018. After a period of radio silence, the hotline reportedly reopened again in late July 2021 (South Korean Unification Ministry/Getty Images)
Published 19 Aug 2021     Follow @KhangXVu

Despite protests from North Korea, this week the United States and South Korea kicked off their annual joint military exercise. Korea watchers are worried that the decision to carry on with the drill spells trouble for the inter-Korean détente, which was only revived in July with the reestablishment of the communication lines. North Korea signalled its discontent by not answering calls from the South via the hotlines for more than a week, and threatened to make the United States and the South pay for their provocations.

North Korea’s irritation over the US-South Korea military exercises is to be expected. But what is surprising is its July decision to restart the inter-Korean hotlines and its admission to a series of letter exchanges with South Korean President Moon Jae-in that have been taking place since April. North Korea is well aware that Moon cannot cancel the exercises – they are important for the transfer of wartime operational control (OPCON) back to the South Korean military from Washington, one of Moon’s promises during the first days of his presidency. If North Korean Chairman Kim Jong-un really is interested in re-engagement, why should his government threaten to cease interaction before reaping any rewards? The answer may lie in North Korea’s negotiating tactics, rather than in the threatening nature of any bilateral drills, as North Korea claims. North Korea’s behaviours around another US-South Korea exercise in March may shed some light on its current statements.

Moon and Kim began to exchange letters on the third anniversary of the April 2018 inter-Korean summit.

North Korea has long tried to persuade the United States and South Korea to cancel joint drills by leveraging the ongoing talks. But to no avail. In January this year, Kim again raised the issue of the joint drills, condemning them as a violation of the 2018 Inter-Korean Military Agreement, and making the restoration of inter-Korean détente dependent on Moon’s response. In March, Kim’s sister Kim Yo-jong threatened to shut the door on the South, pointing to the US-South Korea drills as the catalyst. Later that month, North Korea fired multiple short-range missiles to demonstrate its seriousness.

But, contrary to predictions, the North went no further with its provocations and in April, Moon and Kim began to exchange letters on the third anniversary of the April 2018 inter-Korean summit. Those letters would later lead to the resumption of the hotlines and discussions over a reopening of the joint liaison office in July. Pyongyang’s overtures to Seoul took place regardless of the fact that Moon continued to keep the OPCON transfer on track.

North Korea’s behaviour will not be different this time, either. Just as it did in March, the North will issue threats to punish the United States and South Korea, and there is a possibility that it will test some short-range missiles. But other signs show that Pyongyang will continue to embrace détente with Seoul and exercise restraint. For instance, North Korea’s statements at the ASEAN Regional Forum in early August did not directly target Washington or Seoul. Kim Yo-jong’s threats did not mention any specific actions, which leaves the possibility of dialogue open. North Korea also pointed to the United States as the main culprit, rather than South Korea, in the joint drills and called for US troop withdrawal to give peace a chance.

It is plausible that North Korea is using the re-engagement as a bargaining chip to situate itself in an advantageous position before talks resume. Putting détente on life support creates a sense of urgency in the South and the United States to accept North Korea’s terms before the window of opportunity closes. North Korea needs sanctions relief and it needs it immediately. The country has been frustrated by the lack of US concessions and it wants Washington to relax sanctions at a time when the North Korean economy is experiencing its worst crisis in 23 years. Government handouts to the North Korean people have been absent despite its efforts to set up state-run food shops to control the supply and price of rice. The China-North Korea border remains shut, and the value of foreign currencies has been in decline as North Korean businesses cannot trade with the outside.

Pyongyang will be upset at the bilateral drills, but it will exercise caution to prevent the situation escalating at a time of domestic vulnerability.

If North Korea does not provoke hostility, despite the threats, it is in a good position to ask for something in return from South Korea and the United States. The North has made its stance clear after the reconnection of the communication lines that it wants sanctions relaxed on the exportation of minerals and the importation of refined fuels and daily essentials. Moreover, keeping North-South relations on good terms will help a pro-engagement candidate gain some advantage when the South Korean presidential election is held a little more than six months from now. Restraint will also garner support for South Korean private humanitarian aid groups to send assistance to the North and prevent international sanctions from undercutting humanitarian assistance.

Pyongyang will be upset at the bilateral drills, but it will exercise caution to prevent the situation escalating at a time of domestic vulnerability. It is still too early to rule out a virtual inter-Korean summit or a reestablishment of a liaison office in the next several months. The important question is what South Korea and the United States can offer in return for the North’s goodwill.

Previous Article
Decoding intelligence on Afghanistan
Next Article
Can the US and China cooperate on climate?

Moon’s North Korea vision up in smoke? Not so fast …

Undeterred by criticism, South Korea’s president may have set his sights on a smaller deal.
Khang Vu 11 Oct 2019 06:00

Pyongyang is taking a high-risk, high-reward approach to its engagement with the US.
Khang Vu 9 Apr 2018 14:00