Compounding crises have forced Kim Jong-un to break old habits. It may be a sign of new opportunity. 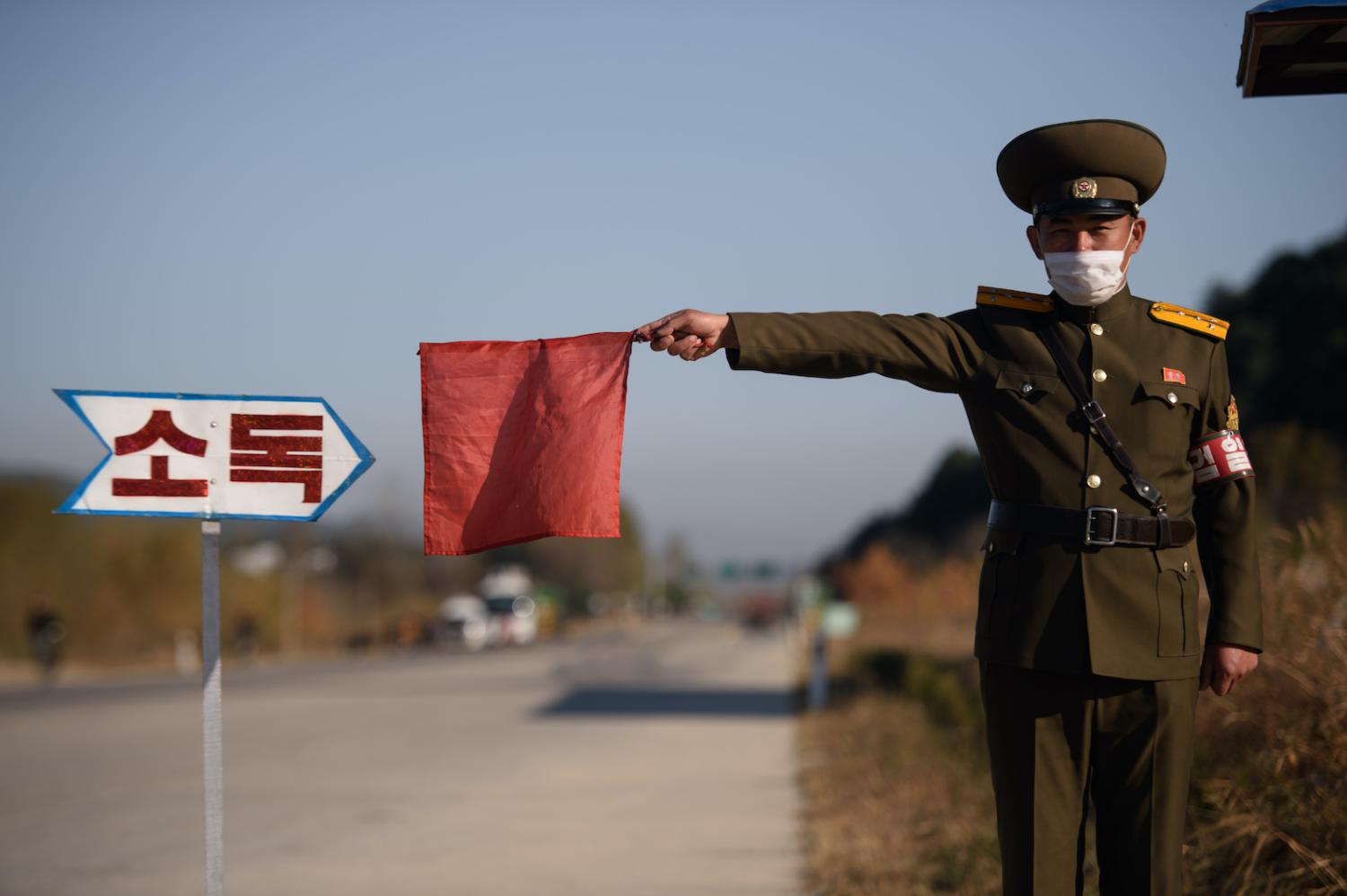 On 1 January 2020, the Workers’ Party of Korea published a report on its goals for the year, emphasising simultaneous economic construction and nuclear development. But with the coronavirus pandemic, a struggling economy and natural disasters, the country has faced a triple whammy. The unexpected hardships have derailed North Korea’s five-year economic plan (2016–21), forcing its Chairman Kim Jong-un to acknowledge “shortcomings” and to schedule a rare Party Congress in January 2021 to cope with the ongoing economic woes.

A look at North Korea’s unusual behaviours over the last year might shed light on how insecure Pyongyang has felt. It is also a chance to gauge its intentions for 2021, especially around the many uncertainties in United States–North Korea relations under a Joe Biden presidency.

When North Korea reported zero Covid-19 cases and deaths, there were many doubts regarding the numbers, given the country’s long border with China and poor healthcare infrastructure. Recent reports note many deaths in just a single city, with the number of people in quarantine facilities increasing.

There are two reasons the country might have hidden the true scale of the outbreak. First, North Korea did not want to disrupt its socioeconomic plan at an uncertain time. After the US refused to lift sanctions last year, the Party highlighted economic self-sufficiency and weapons development as its 2020 objectives. Publicising the number of cases would have meant ceasing economic and military activities and devote more resources to fight the virus.

Second, it would be devastating to Kim’s legitimacy. Publishing numbers requires transparency, as a demonstration of a government’s ability to deliver its end of the social contract. Admitting to a possibly large outbreak would alert the North Korean people to the dilapidated state of their healthcare system and to the government’s focus on its weapons program at the expense of social welfare. Concealing the numbers may have also helped Kim impose cost-saving measures without angering the public, while still being able to carry on with missile development to signal strength.

The leader is dead, isn’t he? Reports noted the unusual absence of Kim at the birthday celebration of North Korea’s founder Kim Il-sung on 15 April. Many speculated that Kim might be either dead or weathering the virus in his private residence in Wonsan. Kim’s health suddenly become a topic of great interest. He was reported to undergo a cardiovascular system procedure due to obesity and excessive smoking. His disappearance quickly revived discussions about the many scenarios of a North Korean collapse, including a succession crisis in Pyongyang, the risks of loose nukes, or an all-out civil war. The rumors only ended when the North Korean leader visited a fertiliser plant in May.

Kim has continued to assert the Party’s control over the economy, tightened the border and imposed more fees on imported goods. These measures have only increased the burden for North Koreans relying on the black market and smuggling to make ends meet.

North Korea watchers quickly noted an interesting phenomenon: Kim tended to disappear for three-week periods in 2020 beginning late January, coinciding with the moment North Korea closed its border to curb the virus. Kim disappeared for 25 days in October and only re-emerged to preside over a politburo meeting in November. This time, no one attributed his absence to his death.

While the exact causes of Kim’s disappearances are unknown, their frequency suggests that he needed to isolate himself in quarantine. Although Kim has always tried to portray strength in the face of adversity, he is as vulnerable to the disease as any other world leader.

The country has still not apologised for the murder of a South Korean tourist in 2008 or its attack on Yeonpyeong Island in 2010. But the North Korean leader did issue a rare apology to Seoul after the killing of a South Korean citizen this September. In a similar fashion, during this year’s Party Foundation parade, Kim shed tears for the hardship the North Korean people have had to endure. The gesture contradicted to the godlike mythology that the regime has indoctrinated in its people. On both occasions, Kim expressed his wish to preserve inter-Korean trust and to hold talks with the South once the pandemic is over.

Analysts, however, deemed both Kim’s apology and his tears to be insincere. Although he apologised for the incident, he also praised the patrol boat crew that killed the South Korean man and rebuffed Seoul’s request for a joint investigation. North Korea also upgraded its offensive capability in the inter-Korean border area in November.

Domestically, Kim has continued to assert the Party’s control over the economy, tightened the border and imposed more fees on imported goods. In the context of an extended border closure with China, these measures have only increased the burden for North Koreans relying on the black market and smuggling to make ends meet. The conditions in North Korean quarantine facilities are so bad that people died not of the virus but of malnutrition and poor hygiene. North Korea’s healthcare infrastructure is not equipped to handle an outbreak. With the resurgence of the virus, things are not looking good for Kim.

North Korea has kept silent on Biden’s victory, even though the country has acknowledged past US presidential election outcomes soon after results were announced. But given Kim’s friendly relationship with Donald Trump, who still has nearly two months left in his term, the country has reasons to keep quiet. North Korea has so far resisted provoking the US around election time, unlike in the past.

The reason may be that North Korea does not want to unnecessarily incite the incoming president. There are reports Biden may not resume the “strategic patience” approach of the pre-Trump period, yet he would be open to meeting Kim if it were a step towards denuclearisation. Kim can expect to revive denuclearisation talks with Biden and achieve a small but realistic “tit-for-tat” deal, compared to Trump’s all-or-nothing approach. Some sanctions relief in exchange for an arms control agreement should be a viable solution.

South Korea is pushing the Biden administration to engage North Korea and use the 2021 Tokyo Olympics as an occasion to revive talks, similar to the 2018 Pyeongchang Olympics. Although keeping mum on Biden’s victory, North Korea is rewriting its diplomatic strategy towards the US by allowing working-level diplomats to assume a bigger role, in view of Biden’s preference for bottom-up talks before summits.

The only routine feature of 2020 in North Korea has been its continuing its nuclear and missile programs. The country introduced new monster-size intercontinental (ICBM) and submarine-launched ballistic missiles (SLBM) at the parade celebrating the Foundation of the Workers’ Party. Experts argue that the new ICBMs can better penetrate the US missile defence systems and the SLBMS are more survivable because they are solid fuel and require less preparation time. The country continues producing fissile material and is on the cusp of expanding its plutonium production capability, highlighting the failure of international sanctions to curb its nuclear program. Despite the economic crisis, Kim would be pleased with the nuclear progress he has made in the past year.

Biden confronts a North Korea with more sophisticated nuclear and missile programs, and his goals should be to prevent Pyongyang from mastering reentry capability and to freeze its nuclear production.

Trump’s diplomacy has failed to achieve those goals, but it does lays out a framework for future negotiations. North Korea is at a vulnerable moment and it is ready to give the US and South Korea another try. President Biden should not waste the opportunity.

If only the US could also control its outbreak, the virus need not take over the agenda or make the vote treacherous.
3 Feb 2017 11:30

Euan Graham and Kim Woo-sang discuss the status of Australia and South Korea as middle powers in the Asia-Pacific, and the immediate challenges facing the region