Norway’s ambassador takes a moment in his last week in Canberra to explain what he would tell Anthony Albanese. 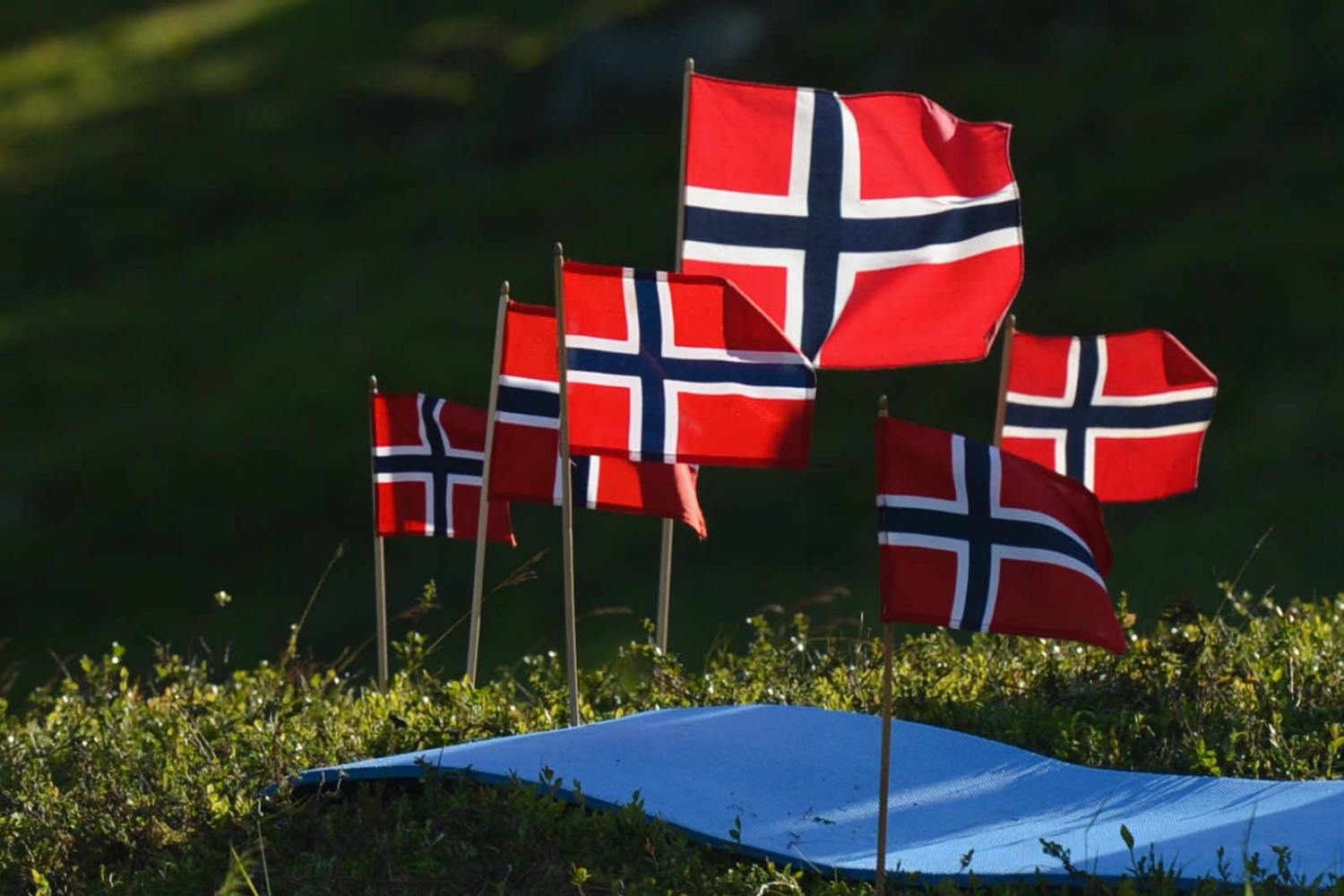 Australia and Norway proper are separated by more than 14,000 kilometres. But Oslo’s ambassador in Canberra insists there is a growing intimacy (Artur Widak/NurPhoto via Getty Images)
Published 15 Aug 2022     Follow @danielflitton

Did you know Norway and Australia share a land border? Well, technically it’s not a recognised border, of the formally demarcated variety. Nor is the ground all that solid. Frozen, yes, but under threat of melting in this era of global warming.

Still, the chance to discuss side-by-side territorial claims to the polar continent of Antarctica would make a useful … ahem … “ice-breaker” for any Norwegian official who had to sit down for an impromptu conversation with Australia’s prime minister.

Which is precisely what I’ve asked Norway’s ambassador in Canberra, Paul Gulleik Larsen, to imagine he’s doing – a hypothetical 30-minute meeting with a newly-elected Anthony Albanese, as part of a series for The Interpreter to highlight relationships less prominent in local media coverage.

“We are neighbours,” Larsen says, with a friendly flourish and a smile, “and there’s no daylight between us in policies either. Norway and Australia are in total agreement on how we deal with the sustainable fisheries in the southern seas and the Antarctic region, maintaining Antarctica as a zone of peace and research, allowing other countries to do scientific activities but not harming the environment.”

Of course, Australia and Norway proper are separated by more than 14,000 kilometres. But Larsen insists there is a growing intimacy.

“Suddenly Australia has become much more interesting. I mean, it was always interesting, but less strategic, I think, a few years ago than today, where we are much closer in so many ways.”

Larsen’s point is that “strategic” drivers can pull even across the opposite side of the globe, and this is very much the story of recent years.

Norway had a brief and unwanted starring role in one of Australia’s great political controversies some 20 years ago when the Norwegian-owned cargo ship MV Tampa plucked a group of distressed asylum seekers out of the ocean off the coast of Christmas Island. And almost a century before that, the famed Norwegian explorer Roald Amundsen washed into Hobart in Tasmania in 1912, dishevelled and exhausted having become the first man to reach the South Pole, only to be ushered shivering into the basement of a local hotel because no-one believed him.

But Larsen’s point is that “strategic” drivers can pull even across the opposite side of the globe, and this is very much the story of recent years.

“Security and defence cooperation has just been lifted to a totally new level,” Larsen says. “With NATO, of course, focusing more on the Indo-Pacific now, and Australia also now partnering with us supporting Ukraine. But also with our defence company, Kongsberg, becoming a bigger partner in your defence build-up.”

That military cooperation extends beyond the long-standing F-35 Joint Strike Fighter program to last year Kongsberg taking further steps in the joint production of surface-to-air missiles in Adelaide, as well as signing a contract in April to supply missiles for Australia’s ANZAC-class frigates and Hobart-class destroyers. 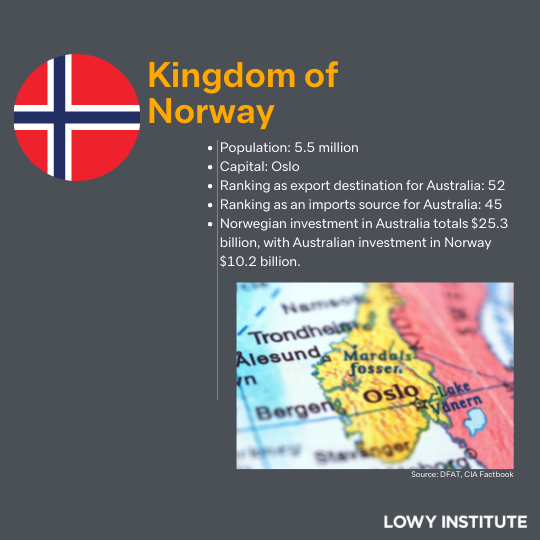 But beyond things that go bang, Norway has also been drawn to engage with the Pacific. Larsen is accredited from Canberra to 11 countries across the Pacific – “the world record,” he jokes, and barring Kiribati, for reasons of Covid lockdowns, he’s managed to travel to each over the past few years, several more than once.

“Norway has never really had any relations to speak of with the South Pacific before this past three or four years,” he says. One of Larsen’s early jobs after arriving in September 2018 was to escort the first ever Norwegian cabinet minister to the Pacific Islands Forum summit, in Nauru. The next year he went to the Tuvalu meeting with Norway’s foreign minister, highlighting Norway’s ambitions to join the United Nations Security Council, a campaign it would ultimately win. “I think that visit really clinched it for us. My impression is that we got support from all the South Pacific states and Australia and New Zealand for our Security Council bid.”

While Larsen, pictured, acknowledges that, like Australia, Norway benefits economically from trading fossil fuels, he ranks combating climate change and joint efforts to promote ocean health as key priorities, including for relations with Australia and the region. 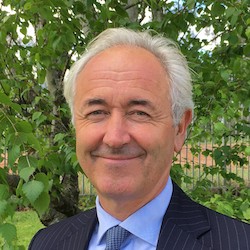 “I would really encourage and commend the prime minister for the recent legislation which is being passed in the parliament now on ambitious climate policies and the reductions in emissions, and as well as our cooperation on oceans, which has been really a new area of foreign policy priority for us and for Australia.”

Alongside Palau, Norway has driven a 12-member “High Level Panel for a Sustainable Ocean Economy”, which Australia also joined with Indonesia, Fiji, Japan and others. “All of us have huge economic zones and a big commitment to combat pollution and illegal fishing and defend the Law of the Sea Convention of the United Nations,” says Larsen. “So, these are two very important areas, on top of our traditional strong joint support for the rules-based system.”

Any mention of support for the established global rules can’t help but raise the question of China. Like Australia in recent times, Norway earlier found itself in China’s economic dog house, punished by Beijing after the 2010 Nobel Peace Prize was awarded to imprisoned dissident Liu Xiaobo, effectively stopping Norwegian salmon imports. It wasn’t until 2016 that tensions eased. I ask if the experience holds lessons for Australia that he might share with the PM?

“I think it’s very hard for us to offer advice on this,” Larsen says. “There were some exports during the time of the diplomatic freeze but not as much as we would have liked and much less than other trading partners. So, it was important for us to reopen and normalise with China without, of course, renouncing our principles and values. But Australia has your own and different situation with China, even though there are some similarities, and I think your government is doing its best to deal with that challenging situation, obviously, as we all are.”

For Larsen personally, this is hello and goodbye, at least as far as Albanese is concerned. Larsen has his bags packed and ticket home. He had arrived in Australia just as Scott Morrison replaced Malcolm Turnbull as prime minister and I’m speaking to him during his last week in the job. Two elections, a pandemic and great global tumult have marked his time. What he sees, however, is common connection.

“We are hardworking nations with a lot of rough similarities as well, in terms of our nature and the oceans. Of course, the size of the Australian continent is amazing. That’s really a big difference between us. You have a huge continent, where we have a long narrow strip of rocks.”

Australians have been passengers, if not active participants, in our own polarisation.
Catherine Renshaw 10 Aug 2021 06:00

An empty chair in New York would be a potent reflection of the situation on the ground in post-coup Myanmar.
Richard Maude, Ben Scott 3 Mar 2022 14:00