The US was quick to blame Iran for the oil tankers stricken in the Oman Gulf, yet will Donald Trump convince the world? 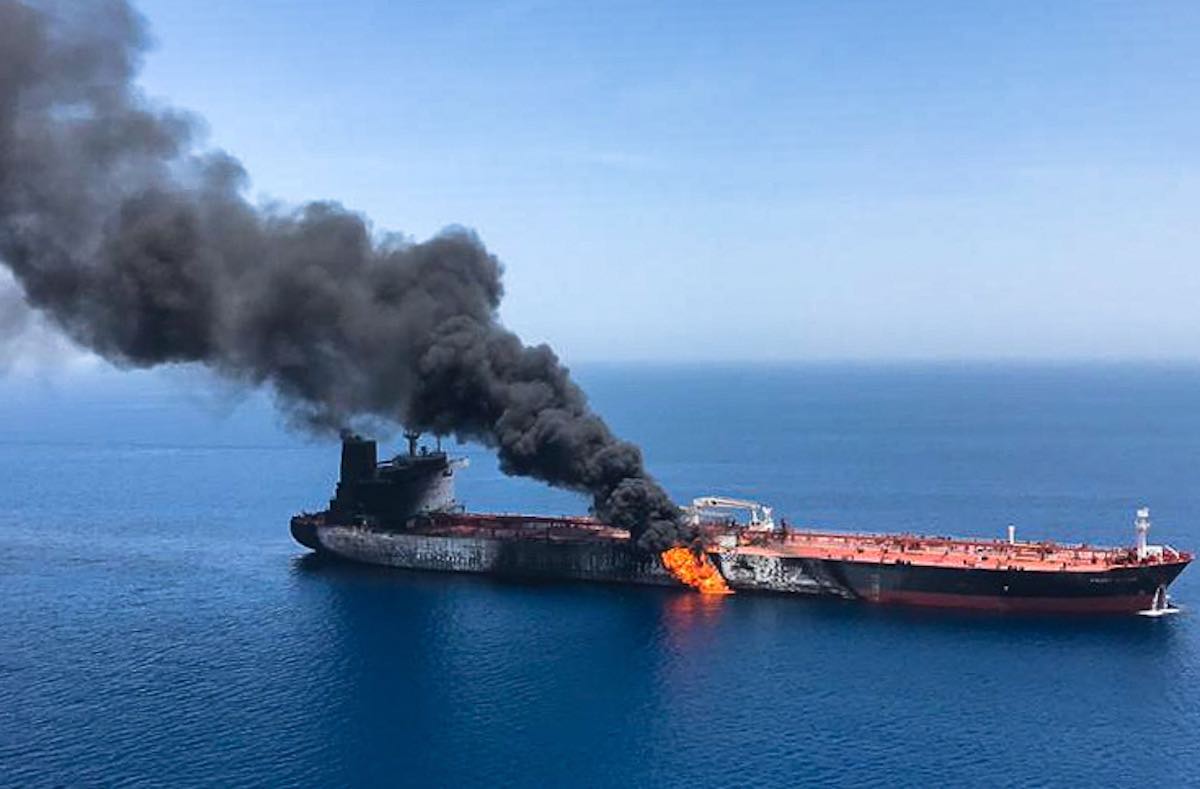 For the US to directly accuse Iran of attacking oil tankers just outside the heavily congested, economically critical and strategically vital waters of the Persian Gulf … well, it ought to be a big deal. A really big deal.

And it’s not as if this story is being ignored. As I checked this morning across the English-language international news websites, each of New York Times, BBC, CNN, Fars News and Al Jazeera had prominently displayed the dramatic footage of black smoke billowing from floundering ships.

My sense is this relative lack of immediate local media alarm in far off Australia tells us something about the diminished authority and credibility of the White House.

Less so Australia’s media. The Age and Sydney Morning Herald websites had the events in the Gulf of Oman somewhat lost in the business section and behind White House spokeswoman Sarah Huckabee-Sanders quitting her post. The Australian made the tanker story a little more obvious but still well below local politics, and the ABC had allowed it to slip well down the page behind the Matildas' comeback win in the women’s World Cup and the not guilty plea from the Christchurch shooter.

None of this is meant as criticism of Australia’s media or as a definitive survey. Editorial judgements are always subjective to the audience, timing and the medium. Radio and television covered the news of the apparent attacks on the oil tankers differently.

And more to the point, there are still plenty of doubts around what actually happened. The events are confused and still unfolding. The US has said it will dispatch more warships to the area, while those scouring shipping data have raised questions about what might have been the cause. I’ve seen speculation about everything from limpet mines or a torpedo attack to disputes about who rescued the crew. A little caution in reporting is a good thing. This story has quite a way to run.

Still, US officials have been nothing short of definitive. There is no wriggle room in what US Secretary of State Mike Pompeo had to say: “It is the assessment of the United States Government that the Islamic Republic of Iran is responsible for the attacks that occurred in the Gulf of Oman today.” Again, such a bold claim is a big deal.

My sense is this relative lack of immediate local media alarm in far off Australia tells us something about the diminished authority and credibility of the White House. Donald Trump makes wild threats and accusations one moment, only to make a head-snapping back down the next. Last week it was tariffs against Mexico, now dropped. Or go back to his sudden urge to withdraw troops from Syria, quickly abandoned. Or recall the threat to unleash “fire and fury” against North Korea, only to make a fast friend of Kim Jong-un (“We fell in love”, no less). Just a few weeks ago Trump was Twitter-thumping against Tehran, yet still holding out the prospect of a making a deal.

In part, some of this is obviously tactical, so the news value is lessened, and some of this reflects what are assumed to be tensions between Trump’s hawkish officials, such as National Security Adviser John “Bomb Iran” Bolton, and Trump’s actual record of relative caution.

This credibility problem is not all about Trump and his administration. The experience of mistaken secret intelligence assessments about Saddam Hussein’s weapons of mass destruction inevitably leaves people wary when Pompeo makes vague allusions to intelligence to support the latest US allegations against Iran. Survey data persistently indicates a low level of public trust for the US to do the right thing in the world. (The Lowy Institute’s own annual poll will be released later this month and offer a snapshot of Australian views.)

Yet the issue is relative. Do the pronouncements and claims from Tehran inspire any confidence? What of the views of other nations? The challenge for reporters now will be to interview eyewitnesses and piece together the story, allowing that in the meantime, the flood of official pronouncements from all sides, as well as new developments, will make the job of independent assessment demanding.

The first step will be to pay attention and challenge assumptions.