North Korea poses a challenge for regional security, and so often China has stood to benefit from such instability. 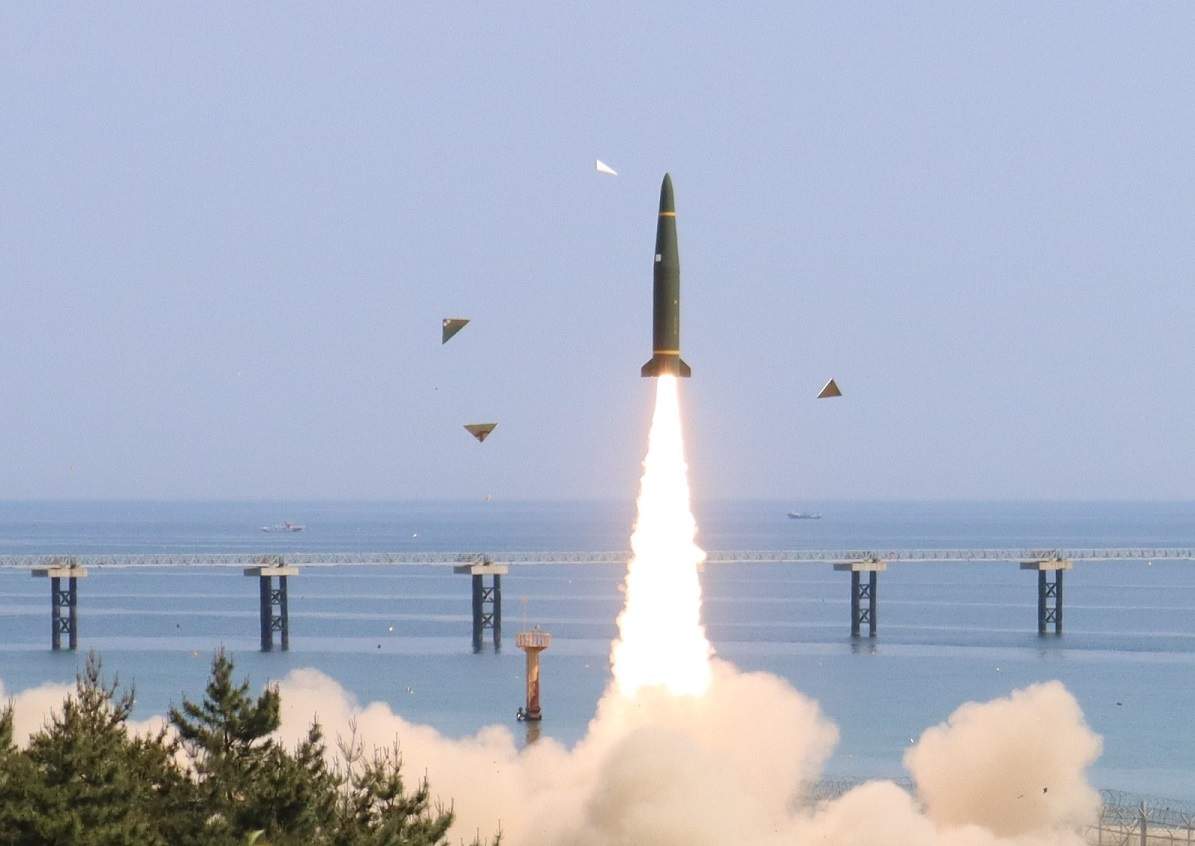 A ground-to-ground missile is fired during a joint US and South Korea training exercise on 25 May, following a test by North Korea of three ballistic missiles fired into the East Sea (South Korean Defence Ministry via Getty Images)
Published 8 Jun 2022 05:00   0 Comments

North Korea at least waited until US President Joe Biden had left Asia before launching another volley of missiles to splash into the sea. American officials had braced for a potential show of force by Pyongyang as Biden toured the region last month for meetings culminating with the “Quad” nations, India, United States, Japan and Australia. Certainly North Korea was on the minds of the gathered leaders – in a joint statement issued after their summit in Tokyo, the four members condemned Pyongyang’s “destabilising ballistic missile launches” and called on North Korea to engage in substantive dialogue for the complete denuclearisation of the Korean peninsula in line with the United Nations Security Council resolutions. They also emphasised a need to immediately resolve the question of Japanese abductees, which directly involves North Korea.

The main focus of the Quad – while not explicitly named – is clearly China.

Biden had earlier visited Seoul and discussed options to deter North Korea with newly sworn-in South Korean President Yoon Suk-yeol (who has been toying with the idea of joining the Quad). North Korea’s spree of dangerous missile launches since the beginning of the year has ensured attention is again on the challenges involved.

But the main focus of the Quad – while not explicitly named – is clearly China. The meeting in Tokyo saw much more ambitious steps to counter the twin security and economic challenges that China presents, including condemning the “militarisation of disputed features” in the region, launching a new initiative to enhance maritime awareness to help countries resist coercive actions, and pledging an economic framework to span 13 countries in the Indo-Pacific. Biden also made a point of saying the United States kept open the option of using force to keep China from absorbing Taiwan.

Even so, North Korea remains a regional flashpoint that poses a problem for the Quad. China and North Korea describe their bilateral ties as “invincible” while Beijing has persistently criticised the Quad as an “Asian NATO”. North Korean leader Kim Jong-un this year sent a message to China’s Xi Jinping vowing to work together to “frustrate” perceived threats from the United States and its allies. This has extended in the aftermath of Russia’s invasion of Ukraine – while Beijing abstained in votes at the United Nations, Pyongyang openly supported Moscow. Both Russia and China reciprocated by blocking the imposition of any further sanctions on North Korea.

China has historically made use of North Korea’s heavy economic dependence to ensure the country destabilises, if not entirely threatens, America’s presence in the region. When considering Pyongyang’s expanding arsenal and ability to create instability, supporting North Korea offers a useful means for China to derail the Quad’s plans and discourage investments.

However, the situation can be handled to the benefit of the Quad.

Principally, a “US-led” initiative must not become a “US-dominated” initiative and lose the thread of equality that brought the powers together. India, for instance, which historically sought to play a mediation role on the Korean peninsula, must be allowed its own voice on the challenge.

The Quad must also continue to cooperate on non-traditional security concerns, such as maritime pollution, and in that way foster trust with other actors, including Taiwan. A heavy emphasis on North Korea would be a distraction from core business for the grouping.

Finally, it is important to recognise the weakness of bilateral ties between China and North Korea. North Korea has appeared at times to seek to lessen its dependence on China by seeking advantage through limited cooperation with adversaries. As Pyongyang stands more pressed for money and food supplies than ever before, the Quad can try to open negotiations, which North Korea could agree on in lieu of aid.