The President of the Philippines may stump up with more nationalist rhetoric, but his true message to Beijing is plain. 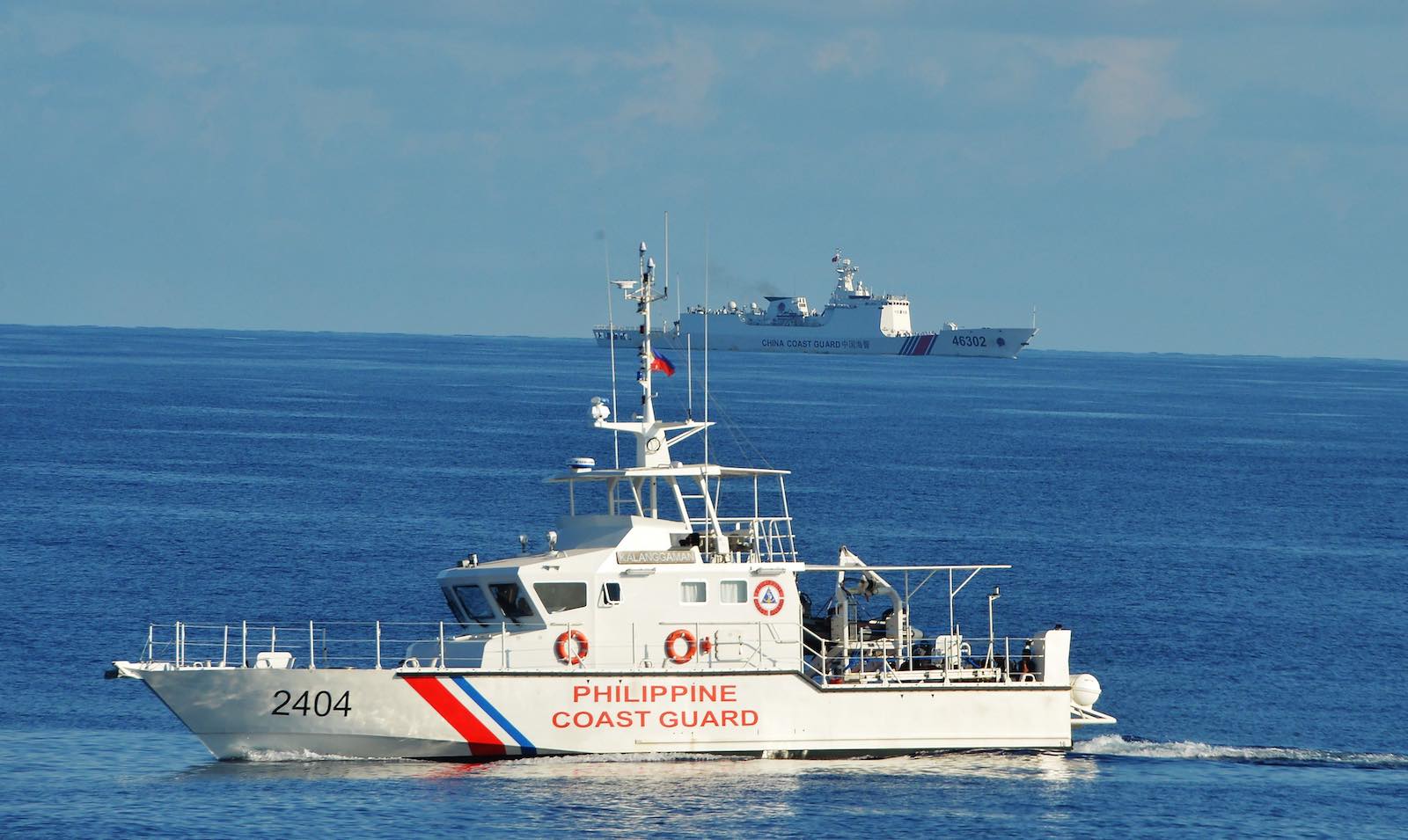 A Philippines coast guard ship sails past a Chinese coastguard ship near Scarborough shoal in the South China Sea in May 2019 (Ted Aljibe/AFP via Getty Images)
Published 23 Oct 2020 06:00   1 Comments

Since coming to office, President Rodrigo Duterte has largely ignored the 2016 arbitration award made in favour of the Philippines under the United Nations Convention on the Law of the Sea, which invalidated China’s nine-dash line claim in the South China Sea. But in an astounding turnaround, Duterte used a speech last month to the United Nations General Assembly to declare “the award is now part of international law” and that “we firmly reject attempts to undermine it.”

Yet it would be a mistake to see this statement as marking a new stance in Duterte’s foreign policy. This is a diversionary strategy, targeted to an audience at home rather than one abroad.

Duterte is sensitive to the negative perceptions about his “appeasement policy” that seems to be yielding too much, too often to Beijing. He has preferred a non-confrontational stance with China, instead aiming to secure Chinese loans and investments to fund his “Build, Build, Build” infrastructure program. But this approach has inadvertently emboldened Beijing to continue with its reclamation projects in the contested waterways of the South China Sea, restricting access to traditional fishing grounds, conducting illegal maritime research, and deploying advanced military assets to Philippines-claimed areas.

Moreover, most of the China’s promised funding and projects in the Philippines remain unfulfilled. Among the nine deals signed with the Export-Import Bank of China, only two projects are in their early stages of implementation. Without any completed Chinese-funded projects to point to as a legacy, Duterte is increasingly accused of trading away Philippine security interests without obtaining substantial economic benefits in return.

So Duterte’s UN speech amounted to an effort to deflect public attention from controversial projects signed with China. For example, the Sangley Point International Airport (SPIA) in Cavite, which will be built by China’s Communications Construction Company Ltd (CCCC), has recently raised alarm bells. CCCC is one of the 24 Chinese firms blacklisted by the US Department of Commerce for building artificial islands in the South China Sea. Philippine Senator Franklin Drilon has called for the immediate cancellation of the project, adding that the World Bank has also blacklisted the firm for fraud in 2011. Yet the Duterte administration maintained that it will continue the project and will not enforce a local ban against CCCC.

There is little to suggest a substantive change after Duterte invoked the arbitration victory in his UN speech.

Another contentious agreement is the construction of network infrastructure inside the military camps of the Armed Forces of the Philippines (AFP). In September, Philippine Defense Secretary Delfin Lorenzana made public the details behind the 2019 Memorandum of Agreement between the AFP and Dito Telecommunity Corp, which is 40% owned by China Telecom. The agreement comes at a critical time when countries such as Australia, New Zealand and the US have either banned or restricted Chinese technology companies due to threats of spying and espionage. AFP Spokesperson Edgard Arevalo has argued that “with the advancement of technology, no country could ever say that its cybersecurity defence is 100% impenetrable, but what we can guarantee is that we will be on our toes”. But such a precarious deal provides China Telecom a strategic opportunity to gain access to Philippine government and military information that puts national security at risk.

Yet there is little to suggest a substantive change after Duterte invoked the arbitration victory in his UN speech. According to the President’s spokesperson Harry Roque, Duterte’s statement is simply the “government’s consistent position all along”. If that’s the case, the ruling has always been there, but Duterte is not bound to follow through with any concrete actions to match his compelling words.

It can be expected that Duterte will ramp up nationalist rhetoric to improve his political standing and even to acquire voter support for his preferred successor in the 2022 presidential election. But his time in office has been defined by continued accommodation towards China and risky deals with Beijing, and this will be the unsettling legacy of his administration.

Show 1 Comments
Previous Article
Economic diplomacy: Japanese investment takes a Toll
Next Article
The tyranny of the present: American politics catches up with the past