Good for ties with Southeast Asia, but a so-so agenda suggests US influence in the region will continue to decline. 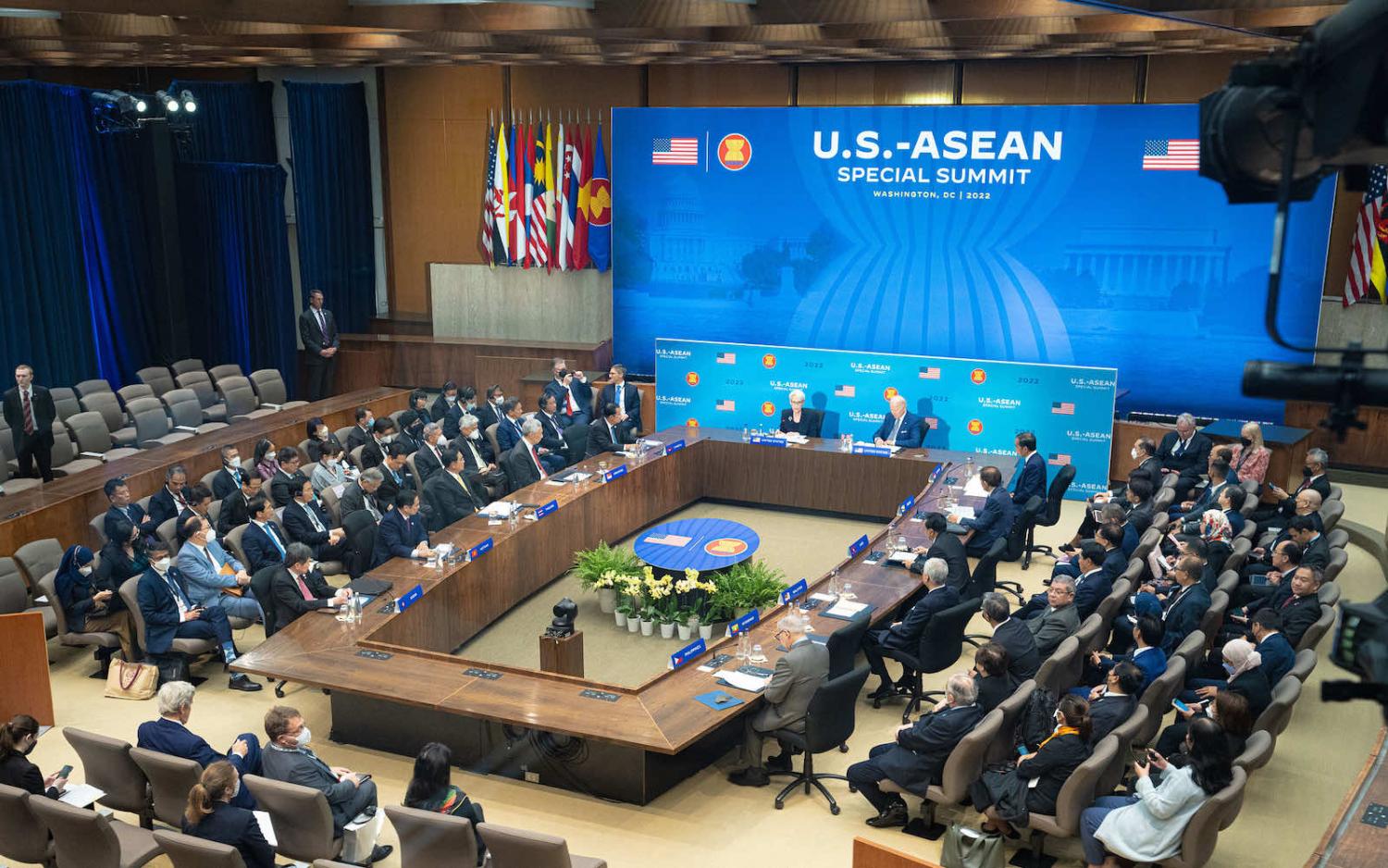 US President Joe Biden and Deputy Secretary of State Wendy Sherman hosting a session with Southeast Asian leaders during the US-ASEAN Special Summit in Washington, 13 May (Freddie Everett/State Department via Flickr)
Published 16 May 2022     Follow @SusannahCPatton

US President Joe Biden hosted ASEAN leaders in Washington last week for a special summit to commemorate 45 years of US-ASEAN ties. Such a meeting was long in the making, having been mooted under the Trump administration but deferred due to the Covid pandemic, and then delayed in 2022 due to scheduling difficulties. Five takeaways were evident from the meeting for US engagement with the region.

1.  The Biden administration wants to focus on Southeast Asia.

That might seem obvious, but hosting the summit was in itself a huge investment of time and resources on Southeast Asia. The meeting’s scheduling shows the Biden administration wants to maintain momentum in its Indo-Pacific strategy, even despite Russia’s invasion of Ukraine.

The summit itself met expectations. Language in the joint statement was relatively strong on issues the US sees as priorities, such as Ukraine, and included a commitment to designate US-ASEAN relations as a “comprehensive strategic partnership” in November (the same level as relations with China and Australia).

The summit also showed that the Biden administration is alive to the concerns and priorities of Southeast Asian countries. Biden’s nomination of an ambassador to ASEAN – a post left vacant for more than five years – is good. In remarks ahead of the summit at the US Institute of Peace, White House Indo-Pacific Coordinator Kurt Campbell repeatedly underscored that the US valued ASEAN’s role, and wanted to engage Southeast Asia on its own terms, not as a function of competition with China.

2.  But it lacks a coherent narrative or cut through message.

The White House announced $150 million of new initiatives for ASEAN at the summit. This is only a small slice of the overall assistance provided by the United States to Southeast Asia – by Washington’s reckoning $12.1 billion since 2002, with $800 million in bilateral assistance requested in the 2023 budget.

A lack of bilateral meetings with the President clearly rankled some, and was especially notable given that Biden has not yet established rapport with many of his counterparts in the region.

Even so, the new initiatives were underwhelming. As regional experts pointed out, the $60 million of funding for maritime cooperation compares unfavourably with funding allocated under the earlier $425 million Southeast Asia Maritime Security Initiative.

And like the $102 million of funding announced at the virtual US-ASEAN summit in 2021, the US is investing small amounts of money in disparate initiatives, few of which will be delivered through ASEAN’s own institutions. Topics range from clean energy to infrastructure, forests, space, and education. While worthy, these disjointed topics, without an over-arching narrative suggest that the US lacks a vision for its partnership with ASEAN. Japan expert Tobias Harris usefully contrasted this with Tokyo’s clearer focus on supporting ASEAN’s economic development.

It's not clear whether the weak outcomes are the result of a lack of timely attention to the summit from senior policy-makers, or a misjudgement about what is needed to deliver impact.

3.  The US Indo-Pacific Economic Framework is not landing well in Southeast Asia.

At least three ASEAN leaders made comments that were to some extent critical of the US proposal to establish an Indo-Pacific Economic Framework (IPEF), and there was no reference to the IPEF in the joint vision statement.

Speaking ahead of the summit, Vietnam’s Prime Minister Pham Minh Chinh said that the United States had identified four pillars of its Indo-Pacific economic framework, “But the concrete elements of that initiative is not yet set in – is not yet clarified.” He said Vietnam was ready to engage with the United States, but needed more time to study the initiative.

Singapore Prime Minister Lee Hsien Loong also implied that US engagement on this front had been lacking, saying publicly that while Singapore welcomed the initiative, it encouraged “greater ASEAN participation in the IPEF and we hope the US will directly invite and engage ASEAN member states in this endeavour."

And Malaysia’s Prime Minister Ismail Sabri Yaakob called for Washington to adopt a “more active” trade and investment agenda. His trade minister said that Malaysia still needed to decide which of the IPEF’s pillars Kuala Lumpur would join.

The comments from the three leaders confirm that IPEF is not landing well in Southeast Asia. The US will need to work harder to ensure regional support before it launches the framework later this month in Tokyo.

4.  US engagement with Southeast Asia still needs time and attention.

ASEAN countries grumbled about a lack of time with the president at the summit. Compared to the 2016 Sunnylands ASEAN Summit hosted by Barack Obama, which comprised two retreat sessions and a dinner, Biden was present at just two of six summit events. A lack of bilateral meetings with the President clearly rankled some, and was especially notable given that Biden has not yet established rapport with many of his counterparts in the region. Since taking office, he’s only held bilateral meetings with Indonesia and Singapore, a sharp contrast to Obama at Sunnylands, who was already well into his second term and had already notched up visits to five ASEAN countries.

On the plus side, hosting the event in Washington enabled the leaders to have productive meetings with the Vice President, members of Congress and the secretaries of State and Defense.

5.  The summit won’t shift the dial for the US in Southeast Asia.

In the end, the summit went well. But context matters, and overall, the US continues to lose influence to China in Southeast Asia. The so-so outcomes suggest that the US underestimates just how fast it is losing this competition. Washington needs to accept it will get no credit for its historical investments and contributions when these are seen as being in relative decline. The United States would need to bring more to the table than it did last week to reverse unfavourable regional trends.

Malaysia’s Prime Minister had an eye on an audience at home while striding an international stage in Sydney at the weekend.

When the G2 idea still had currency, a pandemic might have seemed a potential moment for US-China cooperation
Peter McCawley 3 Jun 2022 05:00