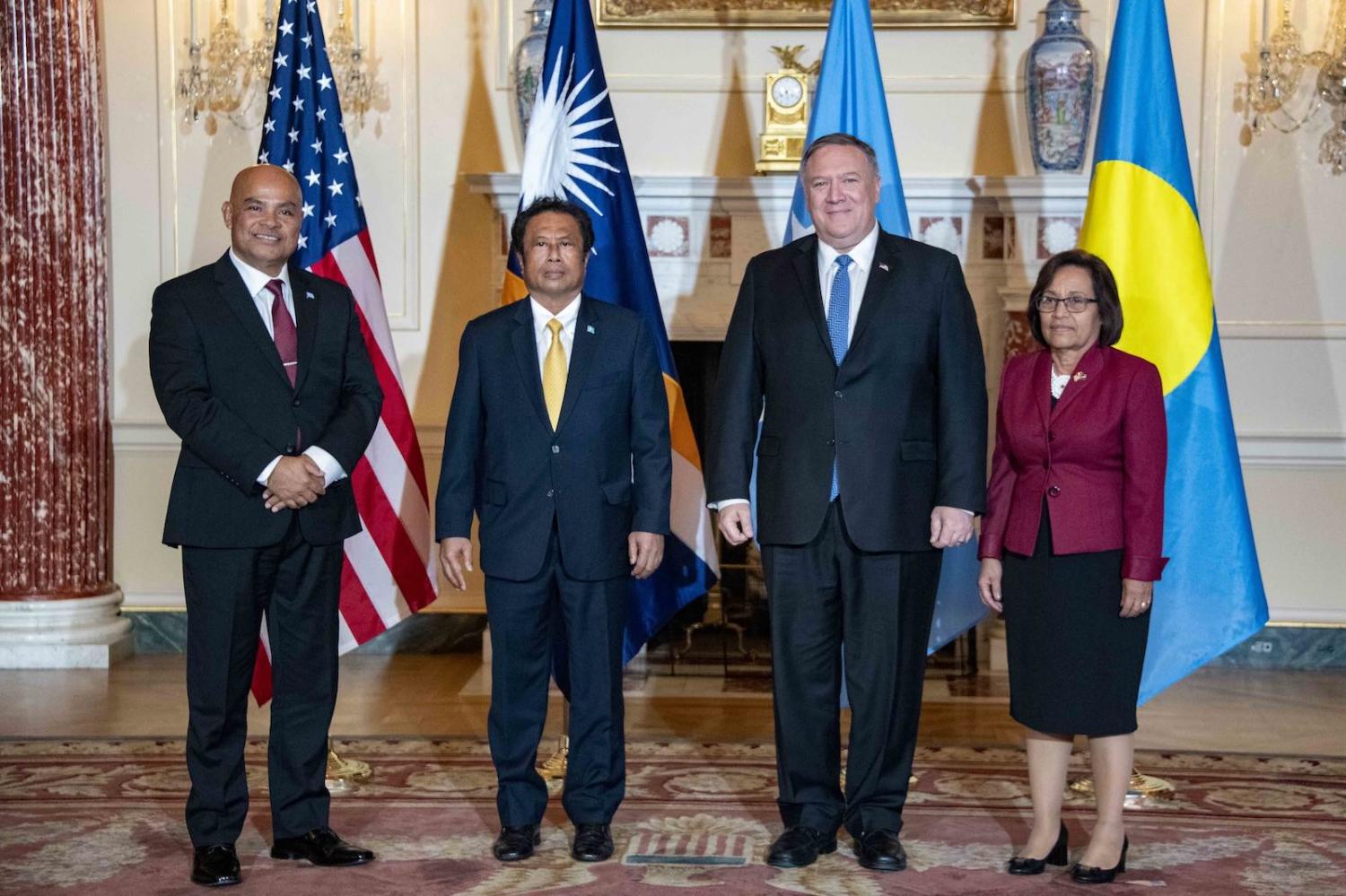 Leaders of the Republic of Palau, Federated States of Micronesia (FSM) and the Republic of the Marshall Islands (RMI) are well used to seeing each other. They share a neighbourhood in the North Pacific and meet annually at the Micronesian Presidents’ Summit to discuss strategies on key issues such as climate change, fisheries, and their relationship with the United States.

As a group they are referred to as the Freely Associated States, based on their Compact of Free Association with the United States; they are independent countries, but the US provides financial and defence assistance in exchange for exclusive territorial access.

For the first time ever, presidents of all three countries will have a joint meeting at the White House with the US President.

Their latest challenge will take place today in Washington, when, for the first time ever, presidents of all three countries will have a joint meeting at the White House with US President Donald Trump.

US officials, commentators and even Palau’s President Tommy Remengesau are right to point out that this meeting underscores importance strategic location of these countries and geopolitical tensions with China. But more significantly, it demonstrates the resolve of each country’s ambassador and leaders to press for the meeting and make their case at the highest political level. The China angle is just one leverage point and it’s evidently worked in order to get the attention of the US Defence department and the White House, who are not shy to mention it. The meeting is likely to be brief, so each leader will need their elevator pitch ready.

So, what is it that Presidents Hilda Heine (RMI), Remengesau (Palau) and newly-elected David Panuelo (FSM) want from their meeting with Trump?

In the past couple of years in particular, leaders of each country have received the red-carpet treatment from China and Taiwan, with high level visits in their own country or abroad. Comparatively, presidents of the Freely Associated States have been given meetings with the Secretary of the US Department of Interior (as recently as 20 May) or State Assistant Secretary. Given that a US President never has, and never will, participate in the Pacific Islands Forum, Micronesian Presidents’ Summit, or similar Pacific island-centred dialogue, this meeting presents a chance for the US to show respect for each leader and the group as a whole.

The last thing the leaders of the Freely Associated States want is for them or their citizens to be seen as a drain on US resources. In fact, a major goal of the Compact of Free Association was to promote self-sufficiency. But providing stability for their citizens residing in US territories, Hawaii, and on the mainland is critical to getting remittances, educational opportunities, access to health care, and positive people-to-people ties.

While residing in the US, citizens of the Freely Associated States are eligible for some services but are ineligible for most federal, state, and local government benefits such as food stamps (now called the Supplemental Nutrition Assistance Program) or Medicare, and have had a number of social safety nets reduced. A suite of government services and grants are written into the Compact, but some are funded by discretionary spending, including the more than $30 million provided annually since 2004 to deal with “Compact Impact” for Guam, Hawaii, Commonwealth of Northern Marianas, and American Samoa.

Citizens of the Freely Associated States also serve in record numbers in the US military; taking care of veterans and ensuring access to sufficient care will be a critical issue.

As recently as this month, the US released funding for FSM for “emergency relief and reconstruction assistance” to be administered by the US Agency for International Development (USAID) and other agencies. The agency has a solid history of providing funding and technical support to the Freely Associated States, each of which face different challenges due to climate change and disaster preparedness.

But the Trump Administration has advocated continued cuts to the State department’s and USAID’s budgets, limiting their capacity in this area. Rather, official policy aims for other countries to share the burden for health and development priorities, reflecting “a new approach toward countries that have taken unfair advantage of the United States’ generosity.”

Reaffirming commitment to the Compact and demonstrating how it is “the backbone of America’s Pacific military strategy” as Remengesau recently wrote will be the most important goal for leaders of the Freely Associated States. They want to know that the US will renew the Compact upon expiry of certain provisions in 2023 for Palau and 2024 for RMI and the FSM, especially funding for their trust funds and delivery of US services.

If Trump realises there’s a deal to be had (in case he’s still around), then they might face their first negotiating test. Trump may well want to see diminished access to economic development or infrastructure funding, US postal services, or other programs identified in the Compact because often they have not reached desired outcomes.

Like many island countries, Palau, FSM, and RMI face mounting challenges in non-communicable diseases; FSM and RMI have some of the highest rates of diabetes in the world, and citizens of the RMI still cope with ramifications of being a former nuclear testing site. Additionally, Palau and the FSM have faced difficulties with illegal fishing and drug trafficking and have struck agreements with the US and others for patrol boats, training, and security cooperation. It is essential that a future Compact acknowledges the history and future trajectory of each country outside of the arena of geostrategic competition.

While the US relationships with the Freely Associated States have been plagued by legal interpretation and the fact of distance over the years, the US sees the Pacific islands “as an essential part of the free and open Indo-Pacific region”. Each has rich histories, cultures, and ideas for the future – and I hope Trump is ready for them.

Previous Article
What’s behind the popularity of President Trump in China?
Next Article
Pacific links: surely not another MPs citizenship saga ..., more

Supporting the kind of region we want

A clean, elected, non-Thaksin Thailand government might be able to walk a narrow path by pursuing more progressive social and economic policy without offending the powerful elites.
Susan Hutchinson 12 Oct 2018 12:30

End the use of sexual violence as a weapon of war

The 2018 Nobel Peace Prize is a message to countries to investigate and prosecute conflict related sexual violence.