The speaker has a long history of standing against Beijing. But Asia’s balance of military power has changed. 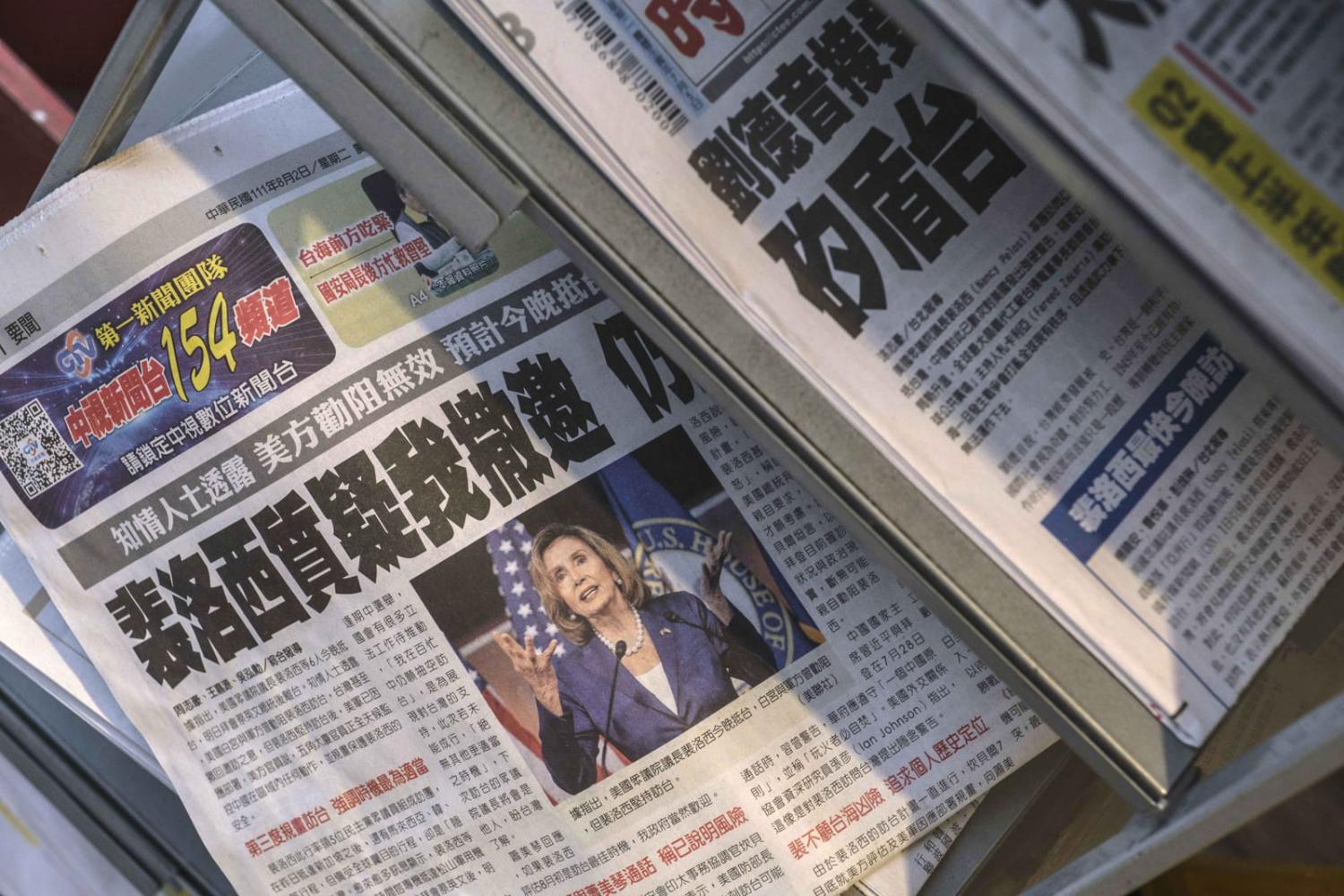 An image of US House Speaker Nancy Pelosi on the front page of a local newspaper on 2 August in Taipei, Taiwan, amid speculation she will soon visit (Lam Yik Fei/Bloomberg via Getty Images)
Published 2 Aug 2022     Follow @Adam_P_Lockyer

Speculation continues to mount that Nancy Pelosi will visit Taiwan during her trip to Asia this week. The schedule of the US Speaker of the House of Representatives, who arrived in Singapore on Monday, includes visits to some of America’s closest allies and security partners in the region, including Malaysia, South Korea and Japan.

Although members of US congress routinely visit Taiwan, Pelosi’s visit will make her the highest-ranking American politician to pass through Taipei in decades. A stop-over in Taipei would undoubtedly trigger a diplomatic protest by Beijing. The question is whether it will also spark a larger Taiwan Straits crisis or even potentially a Chinese attack on Taiwan.

Despite the speculation that the Pelosi trip may trigger a wider conflict over Taiwan, it is unlikely to escalate to that level. The real danger lies in how China reacts to the US aircraft carrier in the region.

The personal interests involved are important.

In China, President Xi Jinping is seeking to extend his rule for another 10 year term. On the one hand, Xi cannot appear weak on Taiwan. On the other hand, the Chinese economy is faltering and a major international crisis would do further damage.

If invading Taiwan were easy, then Beijing would have done it by now.

As such, Beijing is carefully calibrating its language. It has issued a series of warnings aimed at dissuading the visit, and giving the appearance of being tough, without cornering itself politically. On Monday, in typical blustering fashion, Chinese Foreign Ministry spokesperson Zhao Lijian said that: “A visit to Taiwan by her would constitute a gross interference in China’s internal affairs … and lead to a very serious situation and grave consequences.”

Across the Pacific, personalities are also in play. President Joe Biden and the US military have made it clear that he would prefer that Pelosi not visit Taiwan. The political gain from the visit does not justify the risks.

This trip, however, is important to Pelosi. She has a long history of standing-up to Beijing. In 1991, for example, only four years after becoming a member of congress, Pelosi along with two other congresspeople slipped away from their Chinese escorts, walked to Tiananmen Square, and displayed a hand-painted banner that read: “To those who died for democracy in China.” Since then, she has frequently condemned China on its poor human rights record.

Some footage from the CNN archive of Pelosi unfurling a pro-democracy banner in Tiananmen Square in 1991 (alongside Reps. Ben Jones and John Miller) before Chinese officials interrupt pic.twitter.com/fmbSNry3bX

This is Pelosi’s last chance to visit Taiwan as Speaker. She is 82 years old and if – as many expect – the Republicans win control of the House of Representatives in the November mid-terms, then that will be the last time she is Speaker.

So, it is unlikely that even if the President and the US military believe it is a bad idea and warn the Speaker against the trip that she will change her mind. Furthermore, at this point, it is not entirely clear that they should. Cancelling the visit now may look like Washington is appeasing a revanchist power.

The United States is expecting a robust response from China.

The US Navy has deployed the aircraft carrier USS Ronald Reagan and amphibious assault ship USS Tripoli to the edge of the South China Sea near Taiwan. The Tripoli has 20 US Marine F-35Bs embarked.

How China will respond is an open question. It will likely conduct live fire exercises near Taiwan, which is a reasonably routine occurrence. It will also likely fly more aircraft into Taiwan’s air defence identification zone (ADIZ), which is similarly a well-worn provocation.

The question is whether China will ratchet up tensions to include missile tests into the Taiwan Straits, similar to its actions in the 1995–96 Taiwan Straits crisis. In that instance, the US deployed the carriers USS Independence, USS Nimitz and amphibious assault ship USS Belleau Wood with the latter two battle groups eventually sailing through the Taiwan Straits.

Since 1996, China’s maritime capabilities have advanced beyond recognition and a similar response today would be extremely fraught. However, a failure not to respond in an analogous fashion would likely be interpreted as America backing down. The two crises could not help but be compared.

Taiwan is not Ukraine

Immediately following Russia’s invasion of Ukraine, commentators began worrying that it might encourage China to take similar action against Taiwan. There were a number of reasons for this conclusion, including that US attention may be elsewhere and that if NATO’s response was ineffective, then Beijing may expect America’s allies in Asia to be similarly ineffectual.

An invasion of Taiwan, however, would be the largest amphibious assault in history and the world would have months of warning that it was coming. The invasion would be many magnitudes larger than the 1944 D-Day invasion and be launched across seas that China did not have complete control over. The whole enterprise may well end in disaster for China. Indeed, if invading Taiwan were easy, then Beijing would have done it by now.

Worst case, therefore, is that Beijing deliberately replays its moves from 1995–96 to show the region that Washington is not willing to be as bold as it was almost 30 years ago.

At that point, the United States may call the bluff and transit a carrier. The ball would then be back in Beijing’s court. A Chinese challenge to the safe transit of a carrier strike group would spark a very serious crisis.

Pelosi may not have changed much since the 1990s, but the balance of military power in Asia has.

Previous Article
Killing the al-Qaeda chief leaves endless questions
Next Article
Russia and Turkey: Sometimes strongmen need to get along

The emotional responses to the vote offer a more nuanced picture than an emphasis on hypothetical worst-case outcomes.
Damien Spry 20 Feb 2017 08:47

Networks and narratives: Public diplomacy in the DFAT White Paper

Australia has a powerful 'strategic narrative' that is a potent source of soft power. But it's increasingly difficult for this story to be heard.