Australia and China offer the archipelago nation a grab bag of policing options that often miss the mark. 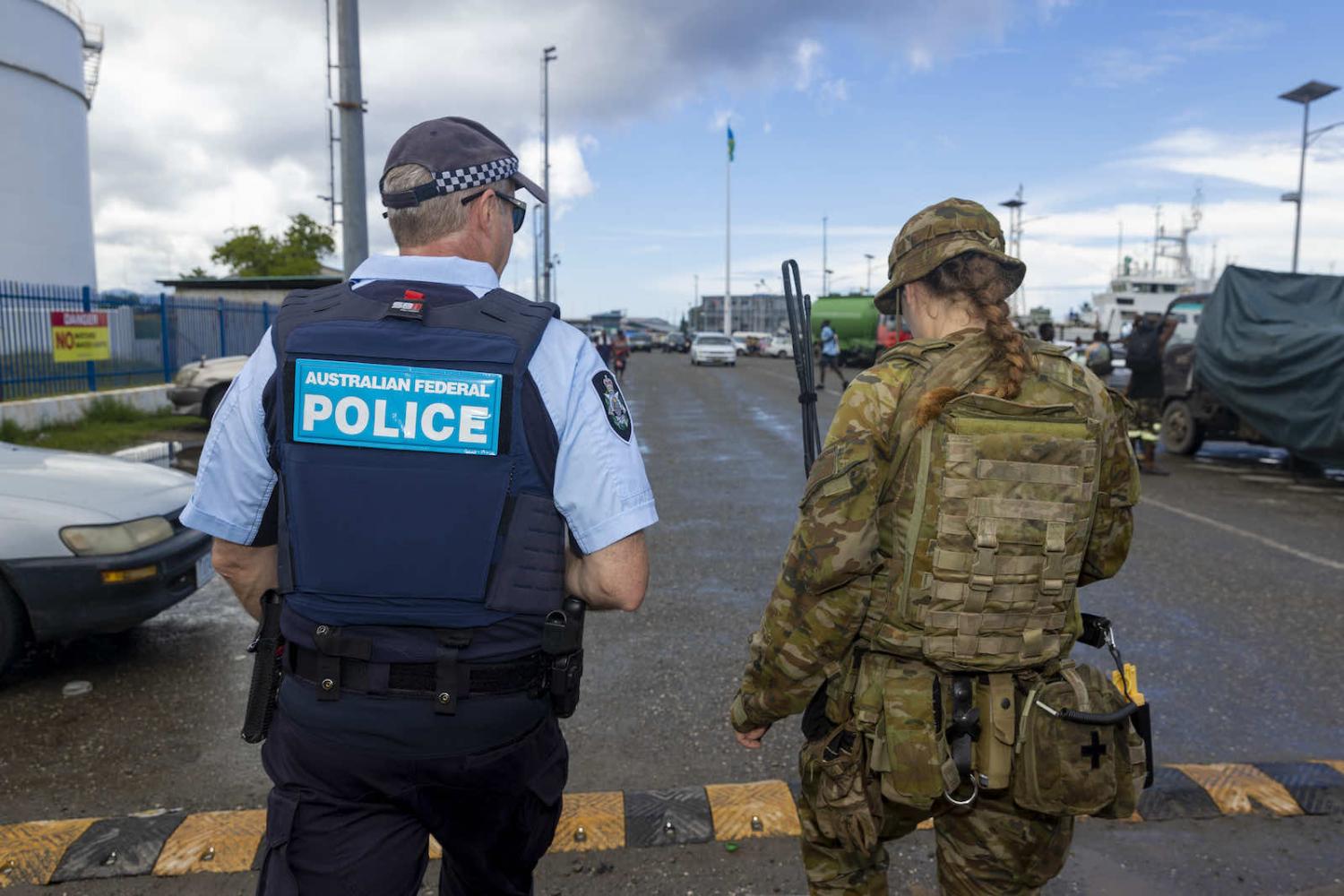 The pre-Christmas announcement that Solomon Islands’ government was going to accept China’s offer of six police advisers and a swag of emergency riot equipment generated consternation in Canberra. The ABC’s Andrew Greene reported discomfit from his “defence and diplomatic” sources.

The offer came on the heels of a contingent of Australian police and military arriving following riots in Honiara in November. A few weeks later, Australian Federal Police (AFP) commander Paul Osborne was sworn in as Deputy Commissioner of the Royal Solomon Islands Police Force.

Osborne is not new to this beat. Immediately prior to holding the position, he had been leading the AFP’s capacity-building efforts in the country. From 2011 to 2013, he headed the Regional Assistance Mission to Solomon Islands (RAMSI) police force. In valedictory remarks to the AFP’s in-house magazine, he opined that “the [Royal Solomon Islands Police Force] we see now is rapidly becoming equal to any other Pacific police force”.  He’s probably right. And after more than 40 years of steady assistance, the Royal Solomon Islands Police Force must surely also be a viable candidate for the most exhaustively and expensively trained in the region too, or even the world. In 2014, a Lowy Institute analysis found that of the $2.6 billion price tag for RAMSI, the “law and justice”component comprised the overwhelming share (some 83 per cent), with close to A$1.5 billion spent on the AFP assistance in RAMSI’s first decade.

What’s this all achieved? It’s hard to know. There’s never been a publicly released independent assessment gauging Australia’s police reform efforts. However, a 2019 public opinion survey conducted by the Australian government and the United Nations Development Program found that using community leaders was considered the most effective, and police the least effective, way of resolving disputes.

It’s not inconceivable that a policing partnership with Australia and China could emerge here, too.

Notwithstanding extensive critique, the notion that delivering more training along with countless more policies and procedures is required for police to thrive seems to be firmly embedded as a approach. Australian programs have rumbled on year by year, punctuated by openings of initiatives, and handing-overs of cars, computer labs and the like. Australia has guarded this insular space assiduously. Back in 2019, Solomon Islands Prime Minister Mannaseh Sogavare related how crotchety he had become when Australia rebuffed Taiwanese attempts to provide police training.

The Chinese announcement and consequent grousing lays bare that police assistance programs aren’t about the technical matters of capability building they are dressed up to be. These are “presence missions”, more to do with geopolitical shadow boxing and currying favour with elites.

The arrival of the Chinese cops seems a powerful indicator that Australia has less leverage nowadays. The question is, what’s likely to be on offer from the Chinese? More of the same train and equip stuff that Australia offers? Or something different?

Likely more of the same. To date, China’s Pacific policing assistance has been a grab bag of gifts – anti-riot equipment for Fiji in the lead up to 2014 elections, a police training centre for Samoa, vehicles for Asia-Pacific Economic Cooperation meetings in Papua New Guinea. While Fiji has hosted Chinese cops on short-term secondments, in-country assistance is new territory. It will likely raise strategic eyebrows, coming on the heels of China appointing its first Pacific police liaison officer to Fiji in September 2021, and its first defence attachés to Fiji and Papua New Guinea a year ago.

The international arm of China’s police bears little resemblance to its domestic sibling. China’s police force is remarkable (in a country often referred to as a police state) for its lack of resources and desperately low morale. The force is focussed on “stability maintenance” – stopping protests and keeping tabs on dissidents rather than catching criminals or implementing technocratic plans, the purported focus of policing in Solomon Islands.

Chinese advisers headed for Solomon Islands are more likely to be English-speaking veterans of UN peacekeeping missions than demoralised beat cops. China devotes considerable resources to supporting peacekeeping, contributing far more personnel (over 50,000 to date) than other UN permanent Security Council members and making a considerable contribution to costs, second only to the United States. It is one of a handful of areas where China still looks to work with the United States. In international relations jargon, China is still a “norm taker” in peacekeeping.

It’s not inconceivable that a policing partnership with Australia could emerge here, too. China and Australia have cooperated productively on malaria prevention in Papua New Guinea. And the two countries have good police-to-police relationships already, as per adulatory comments on the AFP’s website. And even if rebuffed, it would be a proactive move, preferable to the reactive nature of Australia’s previous responses to China in the Pacific. All development cooperation programs need a punning acronym; this one could be “Solomon Islands Police CAP” (China Australia Partnership).

A note of caution to end. While stories that warn “the people of the Solomons [being] crushed by a PRC-trained police force” amount to overkill, there is one community with cause for concern. That’s Chinese business migrants whose shops were looted last year and back in 2006. Xi Jinping’s rhetoric frames security cooperation as protecting the motherland’s investments abroad, but it’s also about optics. Chinese citizens deemed to be harming the nation’s image through their “low quality” investments are in the sights of a state with an appetite for extraterritoriality and few concerns about due process. Chinese police bypassed Pacific legal systems in Fiji in 2017 and in Vanuatu in 2019 to round up Chinese nationals, label them as criminals, and bundle them onto planes. That’s an example of criminal justice partnership few want.

There is a new normal for Solomon Islands politics ­– a fund of money makes sitting MPs much stronger than historically.
Kate Phillips 12 Jun 2019 12:00

Barely one in ten girls graduate high school in one of Australia’s closest neighbours, yet the barriers can be overcome.