An American human rights lawyer sentenced to six years in a Phnom Penh prison may cause Hun Sen no end of trouble. 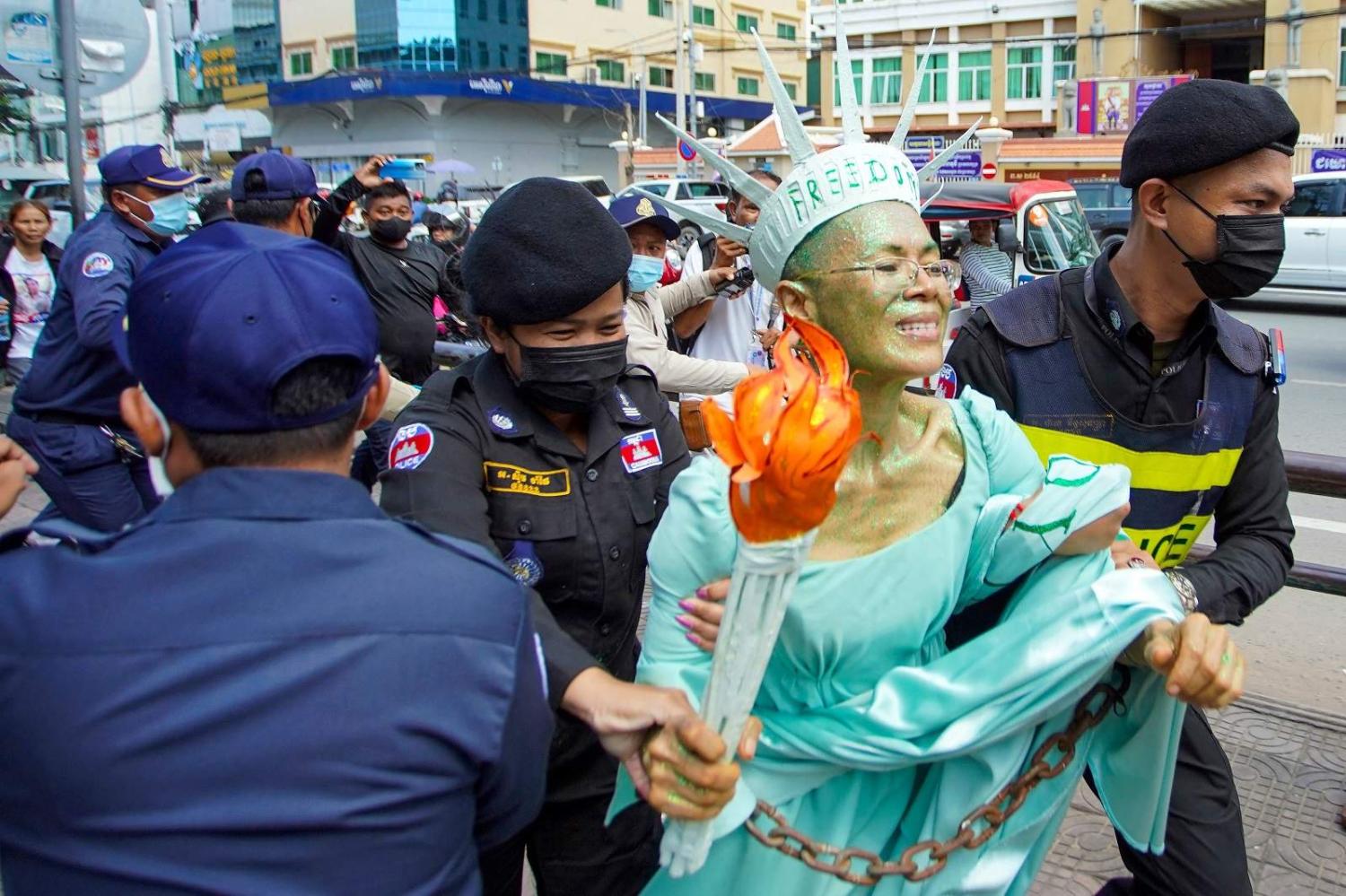 Theary Seng certainly knows how to attract attention. The prominent Cambodian-American human rights lawyer and activist was dressed as “Lady Liberty”, draped in flowing robes, sprinkled in gold glitter and carrying a prop torch and flame when a treason case against her was finalised in a Phnom Penh court earlier this month. The street theatrics had the required effect of causing a stir and annoying police. But the deeper narrative embodied by Seng’s antics is the crushing grip of the Hun Sen regime and the slow death of freedom and democracy in Cambodia.

The case against Seng, and some 60 other defendants, reaches back to the planned return to Cambodia by long-time opposition figure Sam Rainsy in 2019. Rainsy, then the leader of the since dissolved Cambodia National Rescue Party (CNRP), was intending to make a grand re-entry three years after he fled the country on the back of being charged with defamation and incitement crimes.

Hun Sen’s legal assault on dissenters such as Seng, via a court system he largely controls, looks to be part of an on-going effort to clear the decks for his 44-year-old son, Hun Manet.

Seng and the others were accused of backing the action before the Hun Sen government managed to block the opposition leader’s return. All were found guilty, with sentences ranging from five to eight years given to the majority of defendants. Others were given suspended sentences or sentenced in absentia, having already fled the country. Seng received a six-year sentence.

International human rights lawyer Jared Genser, who serves as a pro bono counsel for Seng, told me, “Theary’s story is a window into modern Cambodia.” Both her parents were murdered by the Khmer Rouge, of whom Hun Sen was a regional commander before breaking with the group. She fled to the United States as a nine-year-old in 1980 and eventually gained science and law degrees there. She returned to Cambodia in 2004 and established a non-government organisation aimed at helping the victims of the genocide at the Khmer Rouge Tribunal and began advocating for human rights in Cambodia.

Hun Sen’s legal assault on dissenters such as Seng, via a court system he largely controls, looks to be part of an on-going effort to clear the decks for his 44-year-old son, Hun Manet, whom he is grooming to be his successor. While Hun the Elder has not announced a retirement date, he has hinted he may leave office in 2028.

In 2016, Hun Sen began dismantling the main opposition CNRP and initiated legal cases against numerous opposition figures, triggering the exile of Sam Rainsy and others. Another controversial electoral victory in 2018 not only confirmed the leader’s firm grip but effectively ensured the pro-democracy generation of the 2010s is nullified just in time for what may be his final electoral campaign/win next year.

Across three decades of Hun Sen’s rule, the electoral process in Cambodia appears to have been a means of identifying subsequent generations of opposition leaders to be silenced during the next five year cycle, until the process starts again.

But perhaps this time, Hun Sen might have bitten off more than he can chew. Theary Seng is a US citizen – which obliges the US government to act on her case under a range of US laws. “Charging Theary with these crimes was a huge mistake by Hun Sen,” Jared Genser said. “We will be taking her case to the UN Working Group on Arbitrary Detention.” He says he and Theary’s supporters have already engaged “senior staff at the White House and State Department”.

The Cambodian leader has been busily working to sweeten ties with China in an attempt to balance souring relations with the United States and the European Union since the wave of crackdowns started in 2016.

Genser also highlighted the Cambodia Democracy Act of 2021, which passed the US House of Representatives last September, and which, he says, “provides a number of new tools to apply pressure on Cambodia”. These include targeted sanctions on government officials in Cambodia deemed to be inimical to democracy in the country. “We will be working hard to get that Bill passed by the US Senate.”

The Cambodian leader has been busily working to sweeten ties with China in an attempt to balance souring relations with the United States and the European Union since the wave of crackdowns started in 2016. Of Cambodia’s US$8.8 billion in foreign debt in 2020, China accounted for $US3.9 billion, or 44 per cent. A 2022 report quoting the Cambodian transport minister says that 70 per cent of the country’s roads and bridges have been funded by Beijing.

Upgrades to the Ream Naval Base on the southern coast of Cambodia have been funded by Chinese aid money and despite numerous statements from both Phnom Penh and Beijing attempting to deny it, many consider this to be a foothold for the Chinese military in the region.

Theary Seng’s case complicates relations. While Hun Sen and his supporters hold all the levers of power, indefatigable pro-democracy activists ensure Cambodians are constantly reminded of what a free nation might look like.

Previous Article
Could NATO cope without the United States?
Next Article
What Australians fear with China pressing in the Pacific

A certain boredom? Taking stock of democracy in 2019

The anger directed against liberal democratic institutions today is so rarely attached to any specific objectives.
Mark Beeson 4 Feb 2020 06:00

Dread at the state of the environment has been creeping in steadily. Now there’s a word for it.
Milton Osborne 19 Jul 2018 06:00

In 1993 the international community allowed Hun Sen to remain the dominant political force, as he still is today.