Drawing down troops from Germany one day, inserting the US into the Serbia-Kosovo dispute the next. What’s at play? 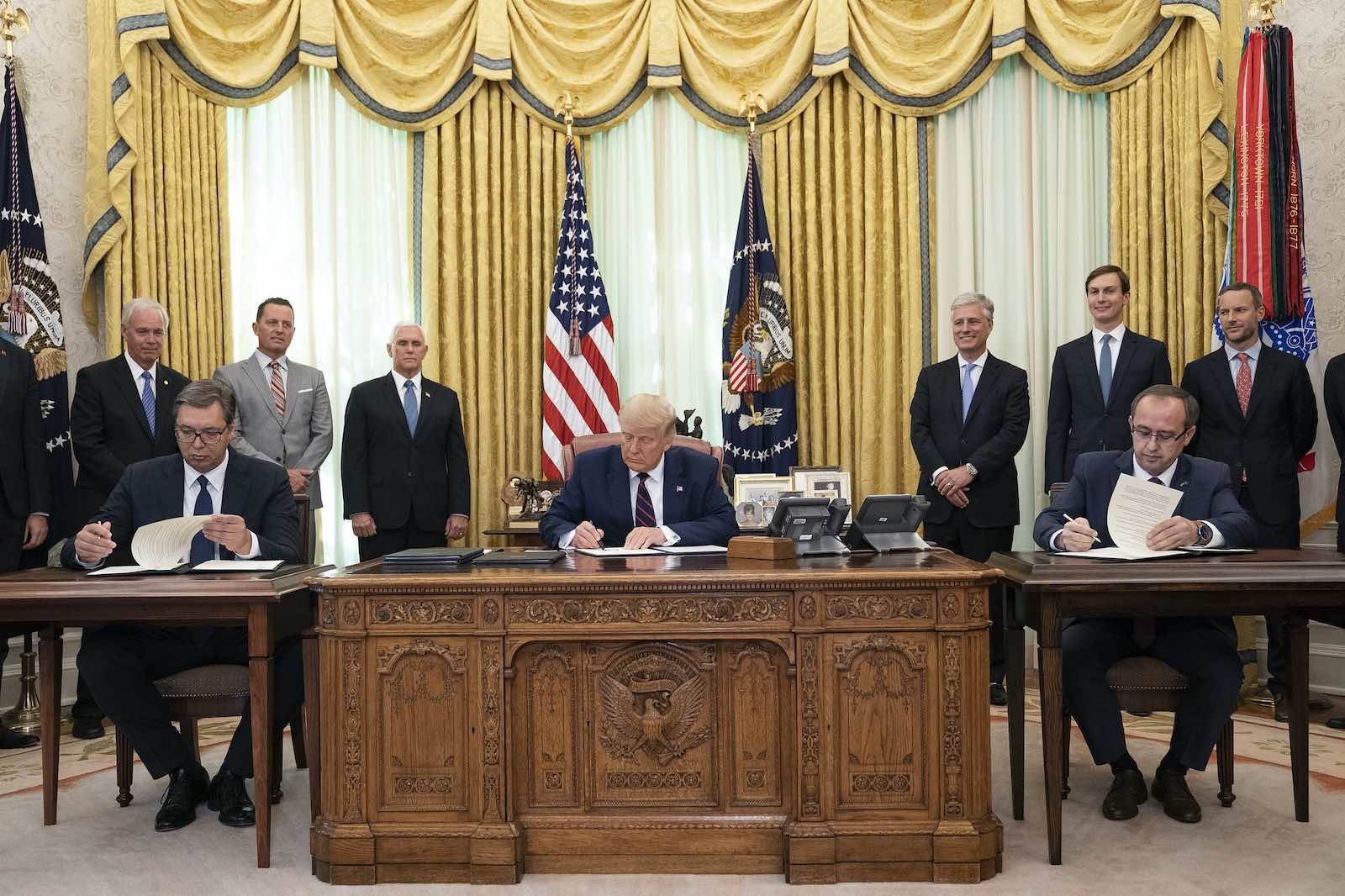 Twenty-five years after brokering the Dayton Peace Accords, which effectively ended the Bosnian conflict, Europe’s bloodiest war since the Second World War, Washington is once again acting as a de facto security guarantor in the Western Balkans. This comes despite more than seven years of (ongoing) European Union–led mediation efforts to find a comprehensive solution “in line with international law and EU acquis” between Serbia and Kosovo (both EU membership aspirants) that promises to provide a foundation for the lasting peace in the region.

On 4 September, leaders from Belgrade and Pristina signed two separate agreements on economic relations at the White House with US President Donald Trump. The White House described them as “truly historic agreements”. These are now known as the Washington Agreements on Serbia-Kosovo Economic Normalisation and guarantee the US presence and role in the Balkans for a long haul.

This move stands in stark contrast to a controversial recent announcement of US troop withdrawal from Germany, which caused a stir in European defence circles. In July, Trump announced that around 12,000 US troops will be moved from Germany to other locations in order to punish Berlin for “not spending enough on defence”. The move is significant as the US is reallocating its European Command headquarters from Stuttgart to Mons in Belgium, in a move tipped to cost billions of dollars. Its Africa Command, currently in Stuttgart (since 2008), is flagged to also move to a different location.

What calculation is behind Trump’s mediation in Serbia-Kosovo’s so-called “no-deal” agreements? For Serbia, they were the last of the four possible drafts, as the first one sought to achieve full recognition of Kosovo’s independence by Belgrade. That could have improved Trump’s chances of attaining the Nobel Peace Prize, which he is known to covet.

Serbian President Aleksandar Vucic is depicting it as a success, trying to assure Serbian people that finally Kosovo was not recognised ... For Kosovo’s Prime Minister Avdullah Hoti, this is a decisive step forward towards the political recognition.

Both agreements comprised 16 points each and were almost identical, save for the last point, where Serbia agreed to remove its embassy to Jerusalem and Kosovo recognising Israel, and thus agreeing to open its embassy to Jerusalem. This move was not welcomed by the EU, whose spokesperson described it as a “matter of concern and regret”. Immediate was the recognition of Kosovo from Israel’s Prime Minister Benjamin Netanyahu, who boasted that Kosovo is the first Muslim-majority country to open its embassy in Jerusalem, sparking Serbia’s reaction that this was not acceptable.

While it is perhaps unsurprising that Israel had become a contentious point between Belgrade and Pristina, some other unexpected points were included in these agreements. One is the commitment of both Belgrade and Pristina to halt installation of the 5G network (which for Serbia was to be installed by Chinese Huawei), and also to declare Hezbollah a terrorist organisation.

The deal effectively removes the possibility of the exchanges of territory between Serbia and Kosovo, a proposal that was often invoked by various parties to the negotiations but criticised by the US administration and key EU members. It also commits both parties to share energy resources and to implement the transport agreement. The US development fund, with a backing of some $60 billion in financial clout guaranteed by US corporations and the US export bank, is soon tipped to open its offices in the Western Balkans. This could potentially challenge the already established Chinese Balkan Silk Road route, which has an investment into a Serbia-Kosovo railway and the highway to Pristina.

All Serbian, Albanian and Kosovar governments have applauded these economic agreements. Serbian President Aleksandar Vucic is depicting it as a success, trying to assure Serbian people that finally Kosovo was not recognised. However, Vucic pledged not to campaign internationally over the next year for the withdrawal of Kosovo’s recognition (including from Australia), as Kosovo promised to halt seeking international memberships in bodies such as the UN for 12 months as well.

As for Kosovo’s Prime Minister Avdullah Hoti, this is a decisive step forward towards the political recognition of Kosovo. The deal had the endorsement of Kosovo President Hashim Thaci, who is facing war crimes charges at The Hague and was not able to travel to Washington.

Even the leader of the Kosovar Alliance for the Future of Kosovo (AAK) Party who is part of the governing coalition, Ramush Haradinaj, despite his initial reactions and threats to leave the coalition, has appreciated the deal on Gazivode/Ujmani lake that will be under the American feasibility and management. On the other hand, Kosovo’s opposition leader, Albin Kurti, criticised the agreement, prompting American broker Richard Grenell to tweet that Kurti is against the US – Kosovo’s major international ally.

While it is still unclear how the new US role in the Western Balkans will be received in Beijing, Vucic telephoned his Russian counterpart Vladimir Putin after reaching the agreements, providing assurances of Serbia’s long-term commitment to a strategic partnership with Russia. After the agreement, Turkey’s President Recep Tayyip Erdoğan criticised the move by Serbia and Kosovo to open their embassies in Jerusalem in separate telephone conversations with Vucic and Thaci.

The Washington Agreements will continue to be presented as the second major success for the Trump administration after mediating the UAE-Israel agreement, for which he was officially nominated for the 2021 Nobel Peace Prize several days later (on 9 August). The question remains whether this will be counted as a decisive step forward in cementing the Trump administration’s foreign policy after the November elections.

Show Comments
Previous Article
Bangladesh: Fight the power or shut up?
Next Article
Where the US went wrong in the pandemic​​​​​​​