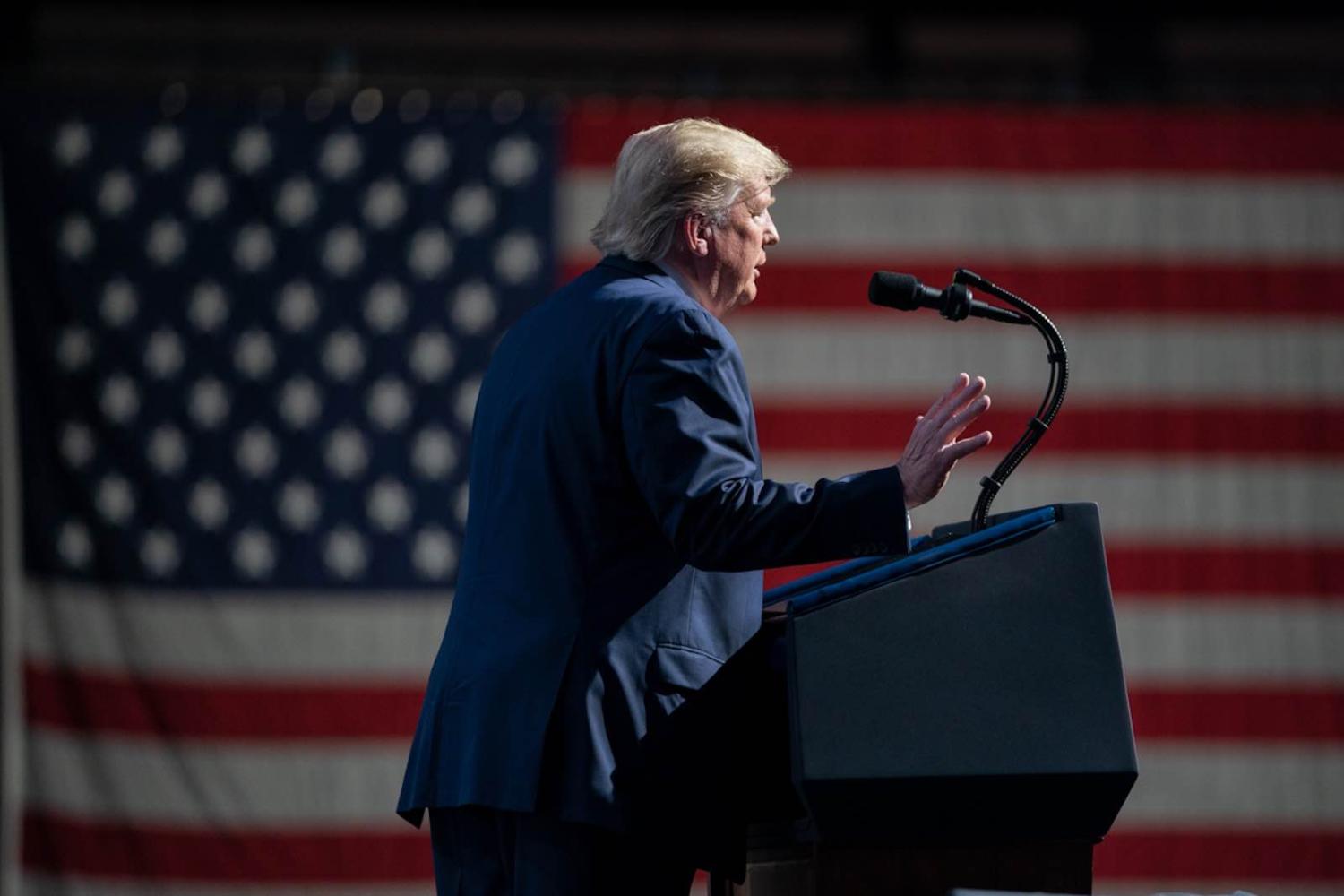 While the Commander-in-Chief says his aims against Tehran are limited, some of his closest confidants have been its biggest proponents of change (Photo: White House/Flickr)
Published 6 Jan 2020     Follow @RodgerShanahan

For a region where the security environment was already fragile, Donald Trump’s decision to kill the head of Iran’s Quds Force, along with a senior Iraqi militia leader, has increased tensions with Iran to a point not seen in many years. And while Trump took office displaying little to no interest in Middle Eastern security, he has spent much of his presidency addressing it.

First, Qasem Soleimani’s death needs to be put into context. Trump’s unilateral decision to withdraw from the Iran nuclear deal, or Joint Comprehensive Plan of Action, and to reimpose sanctions to exert “maximum pressure” on Iran amounted to a series of tactical moves in search of a strategy. Few people understood what he thought he could achieve by doing it, and Tehran saw the move as designed to bring down the government there.

Iran will retaliate, but at a time and in a manner of its choosing.

Trump has said he doesn’t seek regime change in Iran, yet many of those who have passed through his inner circle, such as John Bolton and Rudy Giuliani, subscribe to it, and the pro-regime change think-tank Federation for Defence of Democracies (FDD) has sensed an opportunity to advance such a policy, even paying for the salary of one of their staff while he worked at the White House National Security Council on Iran policy.

So, while on the one hand the Commander-in-Chief declares that his aims against Tehran are limited, some of his closest confidants have been its biggest proponents of change. After setting the conditions that resulted in an Iranian military response to reimposed sanctions, Washington has now killed one of the leading architects of that military response.

Trump’s decision to approve the strike on Soleimani has now fundamentally changed the rules of the game between the US and Iran for the remainder of his term in office. Tehran’s attacks on Gulf shipping and the Abqaiq oil facility in Saudi Arabia last year had elicited a largely defensive response from Washington. But the use of pro-Iranian proxy forces in Iraq to attack US forces and facilities had increased incrementally, so rather than respond incrementally, Trump first approved a heavy military response after a US contractor had been killed, and then the strike on Soleimani.

Soleimani’s death will have some immediate impact on Tehran’s ability to coordinate its strategic campaign against US interests in the region. His Iran-Iraq war veteran deputy Ismail Qanni replaced him nearly immediately and would be across operational issues. But he does not yet have the status or connections of Soleimani that are essential to getting sometimes disparate partners to cooperate. This may well come in time, but there will be a lag.

Soleimani’s standing and Tehran’s promise means that it cannot let this event pass without a significant response, or a series of responses that fall short of attracting Trump’s threat to attack 52 Iranian targets. Iran will retaliate, but at a time and in a manner of its choosing. The Shi’a narrative of resistance against overwhelming odds is a strong one and drawings of Soleimani in the presence of Imam Hussein in paradise are already making their way onto social media to reinforce the continuity of the regime’s religious struggle.

Yet any action will need to be carefully crafted in order to limit the likelihood of it setting off a retaliatory spiral that Iran cannot hope to win. In the short term, Tehran will seek to buy itself some strategic space by looking to Iraq to revoke permission for US troops to be stationed there. But despite parliamentary motions calling for withdrawal, with the size of the recent anti-Iran and anti-corruption riots in Iraq, it would be difficult for Iraq to enforce this step. Washington is a security guarantor, while Tehran is a geographic reality – a hard situation for Baghdad to be in.

We may not know exactly what will follow the death of Soleimani, but we know that something will. For someone who vowed to remove US troops from the region, Trump – like so many US presidents before him – finds himself yet again deploying his military to the Middle East.

A free speech attack? No, if losing access is a blow, it’s because Trump relied on social media too much for too long.
Regina Jefferies 8 Dec 2017 13:00

US Supreme court has a duty to stop Trump's travel ban

History is repeating when a neutral cloak of national security is cast over a policy of discrimination.