It’s not clear how Iran for all its bluster of revenge will be able to hit back at the US. 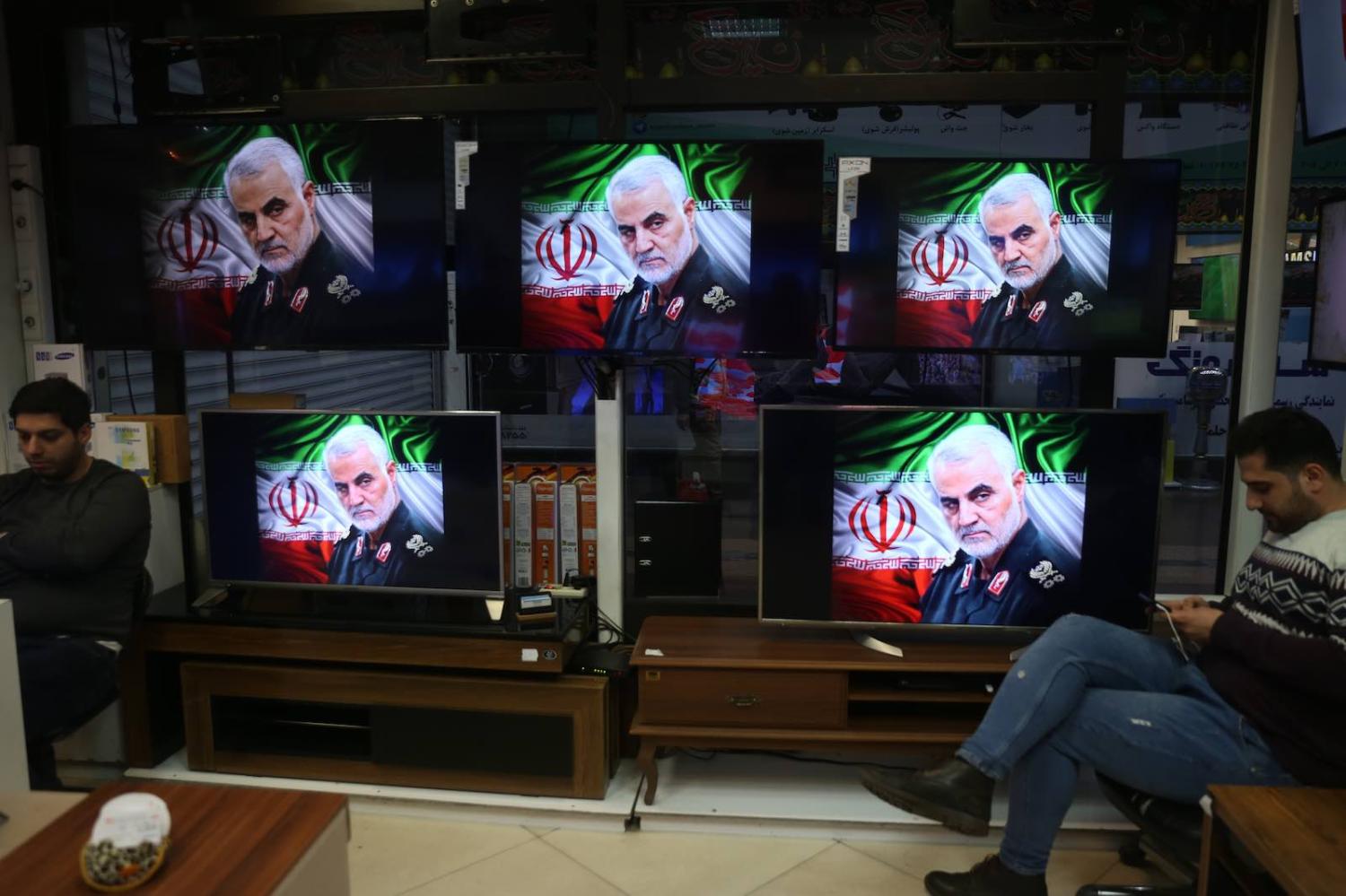 In assessing the consequences of President Donald Trump’s assassination of Qasem Soleimani, the leader of Iran’s elite Islamic Revolutionary Guard Corps Quds Force, the key is the Iraqi government’s reaction. The Iraqi parliament’s resolution overnight demanding expulsion of the US military presence in Iraq was expected, particularly given the Shia (the same as Iran’s religious majority) domination of the parliament.

The resolution itself is non-binding, but Prime Minister Adel Abdul Mahdi, himself a Shia, has made clear he will implement it.

The drone strike was only the latest (though certainly the most outrageous) US violation of Iraqi sovereignty in recent years, but particularly in recent weeks.

There is already major Iraqi sensitivity on this. Apart from the initial invasion in 2003 and the eight year war on Iraqi soil that followed, members of the Iraqi parliament expressed anger over a relatively minor sovereignty transgression when Trump visited US troops in the country in December 2018 without bothering to meet the Iraqi Prime Minister.

The sense was already there that the US thought it could do what it liked in Iraq.

Moreover, the killing of Soleimani comes on top of unilateral US strikes in late December against the pro-Iranian militia Kata’ib Hizballah, in which 25 Iraqi nationals were killed. Iraqi Prime Minister Adel Abdul Mahdi condemned the US attacks.

Even before the assassination of Soleimani, an editorial in the Economist magazine of 3 January was highly critical of Trump’s violations of Iraqi sovereignty, warning they could redound against US interests in Iraq and the broader Middle East.

As well, it is often forgotten (particularly and conveniently by US Republicans) that the reason Barack Obama removed all US military combat personnel from Iraq in December 2011 was not because he abandoned the Iraq mission. Republicans claim that Obama let slip the Bush Administration’s hard-fought victory there after the 2007 “surge” of US troops.

Obama actually wanted to leave a small US force in Iraq, which would probably have been adequate to help Iraqi troops keep order as the country was starting to get on its feet economically. But he couldn’t because the Iraqi parliament would not agree to renewal of the US-Iraqi Status of Forces Agreement (SOFA) that was to expire at the end of 2011 and which provided legal immunities for US military personnel there.

Without a SOFA, Obama could not keep military personnel in Iraq without leaving them exposed to possible prosecutions under Iraqi law – which would have been totally unacceptable to the US Congress. According to James Jeffrey, a former US ambassador to Iraq writing in The Washington Institute blog, the current US military presence in Iraq is defined as “non-combat” and is, he says, “an emergency exception to usual SOFA policy”.

If it comes to tit for tat strikes against each other, the US has the capacity to make that sort of thing much harder for Iran than Iran can for the US.

But the non-combat nature of the US mission in Iraq there is a fiction. And an administrative immunity deal won’t count for much if the Iraqi parliament decides that US military personnel who carried out recent military action in Iraq should be prosecuted under Iraqi law.

Abdul Mahdi was also under enormous pressure from Iran to remove the US presence. But in doing so, he will lose substantial US military and training aid, which has been vital in pushing back and containing Islamic State (ISIS) since it took over most of western Iraq in 2014.

If ISIS takes advantage of the current mess in Iraq to make a comeback, Iraqi forces might not be able to counter it without US support. (That of course raises the interesting question of whether Russian President Vladimir Putin, ever eager to take advantage of US mistakes in the Middle East, might offer Abdul Mahdi the same assistance.)

Moreover, it’s not clear how Iran for all its bluster of revenge over Soleimani will be able to hit back at the US.

Trump has already said he has 52 targets in Iran lined up for US strikes if Iran retaliates with attacks on US interests anywhere (and he is unlikely to need much in the way of hard evidence before reacting). If it comes to tit for tat strikes against each other, the US has the capacity to make that sort of thing much harder for Iran than Iran can for the US. Even if Iran tries cyber attacks, where it reportedly has some capability, the US could hit back much more effectively in that area.

Iran’s leaders will know all this – and they won’t want to be shown up regionally and before the Iranian people as impotent in the face of US aggression.

Another wild card is Iran’s announcement overnight that it is withdrawing from the Iran nuclear deal (the Joint Comprehensive Plan of Action signed in 2015 that placed major restrictions on Iran’s nuclear enrichment). Trump had already abrogated this unilaterally, but Iran’s formal withdrawal means it can now enrich uranium to nuclear weapon grade.

Iran’s leaders would certainly have in mind that the US would have been most unlikely to assassinate a major North Korean figure, given Pyongyang’s nuclear weapon capability.

With inspectors from the International Atomic Energy Agency out of the way, enriching uranium to weapons grade could be done at any of Iran’s existing, well protected underground sites. But anyone who knows Tehran will be aware that a disused factory somewhere in the south Tehran sprawl would also serve for this.

US intelligence might be able to pick up tell-tale electronic evidence of enrichment activity – though such spooking is not infallible. But if Iran really decides to develop a nuclear weapon in the aftermath of the Soleimani assassination, it’s unlikely that anyone or anything will be able to stop it.

The real question will be how long Iran takes to manufacture a nuclear device, and whether it can develop a delivery system, as the North Koreans have.

But that’s for the future. For now, all this raises the question of whether Trump might get away with killing Soleimani with no real adverse consequences for him or the US – indeed with many positive consequences.

In an interview with the New Yorker on 4 January former senior CIA officer and current US congresswoman Elissa Slotkin said that both the Bush and Obama administrations had considered assassinating Soleimani. She said it would not have been difficult as Soleimani regularly left himself exposed, as he had at Baghdad airport. But discussions had always ended with the conclusion that the adverse consequences from such action would not be worth it. She commented that Trump had obviously made a different cost/benefit calculation.

That in turn raises the question of whether Trump made any such on-balance decision – or whether he followed, as he so often does, his gut instinct. It seems highly likely that his action – carried out now, when he could probably have done this any time over the past three years – is related to his impeachment. And obviously to this year’s presidential election.

Republicans, and probably a good many Democrats (if sotto voce), are hugely buoyed by a US military success such as this. And even if the US is kicked out of Iraq, Trump (and most Americans, particularly those in the mid-west states that will decide the election) won’t care. The US still has massive intelligence coverage of Iraq and can hit opponents with impunity.

Despite the dire prognostications, one can’t rule out that, a few months from now, Trump will be judged by most Americans (and by foreign observers) to have won big by killing Iraq’s foremost military commander.

Previous Article
What lies ahead for Hong Kong in 2020
Next Article
Trump’s unpredictability confounds his allies, and now his enemies

The primary right-wing candidate in next week's election is now calling himself the ‘Donald Trump of Korea'.
The Interpreter 17 Dec 2018 06:00

Populism, poison, and The Party: the big stories of 2018

The Trump Administration presents the best opportunity we will ever have to present Australia as a place of welcome and innovation.