“Our most thrilling stories are not yet told”, the president declared, but a new book is full of thrills – and spills. 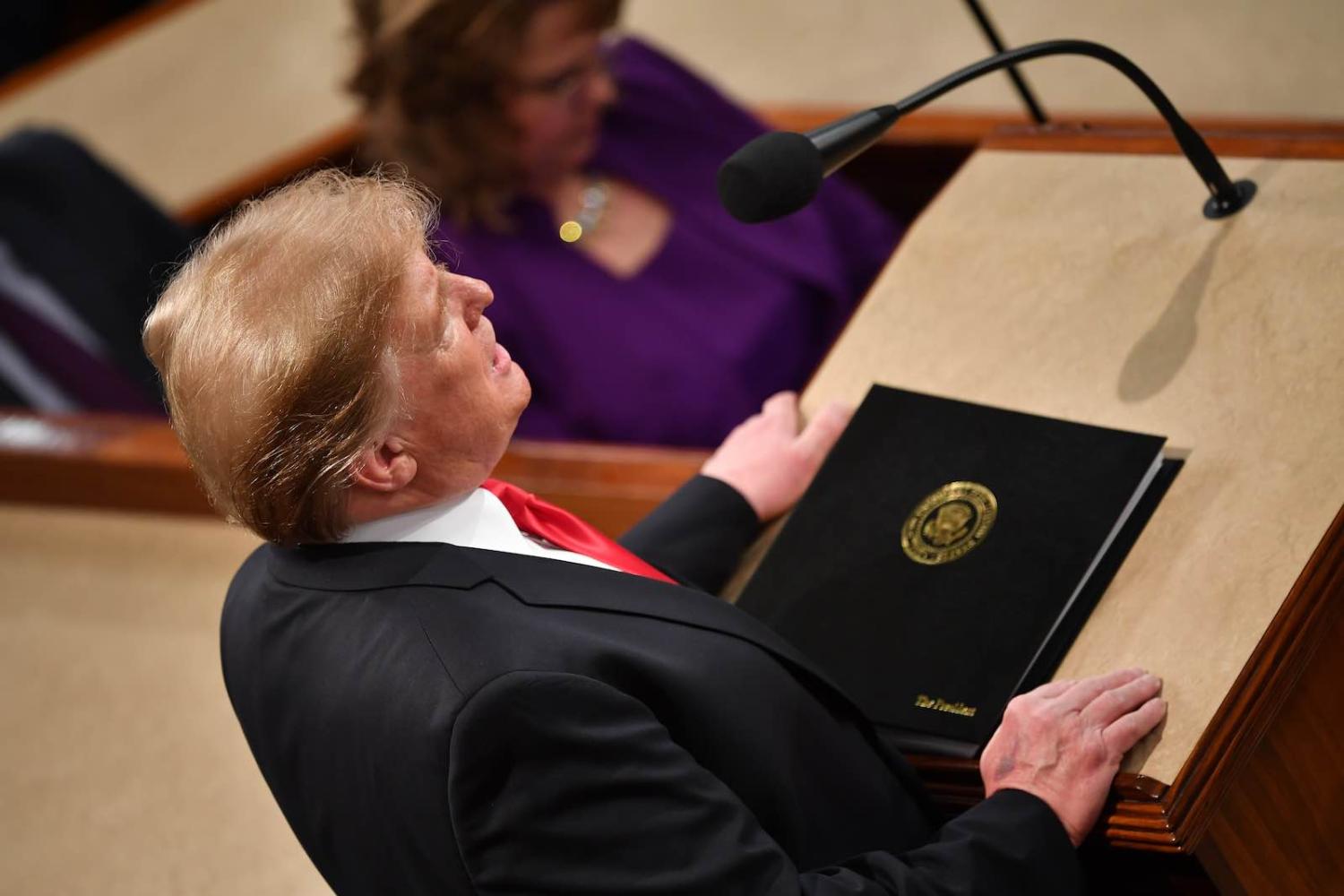 The State of the Union, the US president’s annual speech before a joint session of congress, is invariably a theatrical affair, replete with praise for a string of everyday heroes and inspiring figures.

Superlatives being the order of the day, the State of the Union is a perfect vehicle for President Donald Trump, an opportunity to boast at length as at least half the room stands to applaud at every grandiose declaration, while the other half affects an air of dignified indifference – although House Speaker Nancy Pelosi’s show of ripping up Trump’s printed speech at the end of Tuesday night’s proceedings in Washington might signal a change in the usual protocol.

It is the strangest of times for such an address, as the Democrats fall over themselves looking for a way to wrench power from a figure they regard as a threat to the foundations of the republic – whether by forcing him out of office through impeachment or voting him out in November, neither of which is looking particularly promising for them right now.

Trump, meanwhile, can stand in front of a full house and claim:

"We are building the world’s most prosperous and inclusive society — one where every citizen can join in America’s unparalleled success, and where every community can take part in America’s extraordinary rise."

… and in the next breath he can award, out of the blue, the Presidential Medal of Freedom to a radio shock jock who has made a career of divisiveness and derision, a partisan’s partisan.

In Trump’s version of reality, we are living in the “great American comeback”. It’s safe to say that vision is not shared by all.

The head-spinning tumult of fiction, hypocrisy, and pure chutzpah that has gushed from the White House since Day One of the Trump administration has long since inoculated most observers against any sudden sense of shock.

“You’re all losers,” Trump said. “You don’t know how to win anymore.” He flew into a rage, shocking the officers in the room. “I wouldn’t go to war with you people,” he told them. “You’re a bunch of dopes and babies.”

A rash of political books has helped tell the story. The latest, A Very Stable Genius: Donald J. Trump’s Testing of America, by Washington Post journalists Philip Rucker and Carol Leonnig, has reconstructed meetings, conversations, and confrontations in astonishing detail – meticulously detailed accounts that bring into full focus events often unknown except for their outcomes: the firings, the resignations, the tit-for-tat Twitter tirades that pass for policy statements in an administration bent on doing things its own way, led by a president convinced he always knows better, even when those who actually do know better are routinely gobsmacked at the man’s ignorance and arrogance.

Such a book is far more revealing of Trump’s style – and substance – than any stage-managed speech recited from a teleprompter.

A Very Stable Genius is neither instant historical analysis nor partisan takedown of Trump and his presidency. It is, rather, a monumental feat of reporting that – no matter what happens next – will become a leading reference for analysts and partisans alike. Rucker and Leonnig have drawn on interviews with hundreds of sources, many who were right there in the room, in the effort to make sense of events that stopped making sense to many Americans and many around the world a long time ago.

The fact that few are named on the record will surely be cause for charges of “fake news” from some quarters. Indeed, it’s unfortunate that the climate of fear and paranoia that Trump has engendered has set in so deeply that almost nobody will stick their head above the parapet and be seen – it’s either that or they are too ashamed at having been taken in by the con in the first place.

The cast of characters who have come and gone in the Trump administration is large enough, fittingly, for a Hollywood epic, with big ego clashes, a few cameos, aspiring stars, bit players, and scores of extras trying to look like they’re in sync with the soundtrack. The star and the director, of course, is never to be upstaged – an iron-clad rule some have learned too late.

One of those who upstaged Trump and paid the price is Rex Tillerson, the former Exxon chief whom Trump appointed Secretary of State, and who – despite the gutting of the State Department under his watch – comes off in A Very Stable Genius as the closest thing to a statesman the Trump administration ever had.

After realising, six months into things, the “gaping holes in the president’s knowledge of history and of the alliances forged in the wake of World War II that served as the foundation of America’s strength in the world”, Tillerson – along with Secretary of Defense Jim Mattis and Director of the Economic Council Gary Cohn – organised a “gentle lesson on American power” for Trump, which they billed simply as a briefing on Afghanistan, because it was in the president’s focus at the time.

The venue they selected for this briefing was “the Tank”, a windowless, secure conference room in the Pentagon where the Joint Chiefs of Staff discussed classified matters, and which had impressed Trump as “cool and classic” on his first visit there. The meeting took place on 20 July 2017, with the Joint Chiefs and members of Trump’s cabinet in attendance.

Maps, graphics, and charts were the way to get the attention of a president who didn’t like to read or be lectured to, so the meeting started with a slideshow. The opening line on the screen read: “The post-war international rules-based order is the greatest gift of the greatest generation.” Then, as Rucker and Leonnig recount, Mattis gave a “twenty-minute briefing on the power of the NATO alliance to stabilize Europe and keep America safe”.

Steve Bannon, Trump’s pugnacious adviser, was sitting in the outer ring of chairs, just behind Mattis.

“Oh, baby, this is going to be fucking wild,” Bannon thought. “If you stood up and threatened to shoot [Trump], he couldn’t say ‘post-war rules-based international order’. It’s just not the way he thinks.”

The meeting went off the rails. Mattis, Tillerson, and Cohn attempted to give Trump a detailed briefing on US military, intelligence, and diplomatic operations. Trump became incensed. He ranted against NATO, against free trade agreements, against the Iran nuclear deal. Then he turned on the military leaders in the room.

“You’re all losers,” Trump said. “You don’t know how to win anymore.”

He flew into a rage, shocking the officers in the room. “I wouldn’t go to war with you people,” he told them. “You’re a bunch of dopes and babies.”

For Tillerson, it was too much. He spoke up when the rest of the room was dumbstruck.

The meeting ended and Trump walked out of the room. Afterward, in the hallway, Tillerson said to a small group of people, “He’s a fucking moron.”

When this quote made headlines months later, it was the beginning of the end for Tillerson. It also pushed Trump to publicly proclaim his genius, and to challenge Tillerson to an IQ test – which he later said, of course, was only a joke.

Tillerson, like so many others, is gone, and Trump is looking to stage a comeback after the ignominy of impeachment.

A Very Stable Genius ends right as the impeachment inquiry is beginning. A blunder in foreign affairs – an unwise entreaty to aid his own re-election – proved one misstep too many, and the timorous Democrats finally pounced.

“As autumn bore on, the question facing the Congress and indeed the country was not whether Trump had done anything wrong. The emerging fact pattern plainly showed a quid pro quo with Ukraine and a White House scheme to cover it up. The question was who might enforce the Constitution.”

That question has not changed, no matter what Trump says in a speech.

What charges are laid against women returned to Australia will help us better understand the role they played in Syria.
John Gooding 10 Nov 2016 11:20

Donald Trumps's election victory has prompted immediate speculation about the future of the US-Australia alliance and of the US presence in Asia.
Ben Scott 8 Feb 2022 06:00