Trump sets up a dangerous denouement to presidential campaign 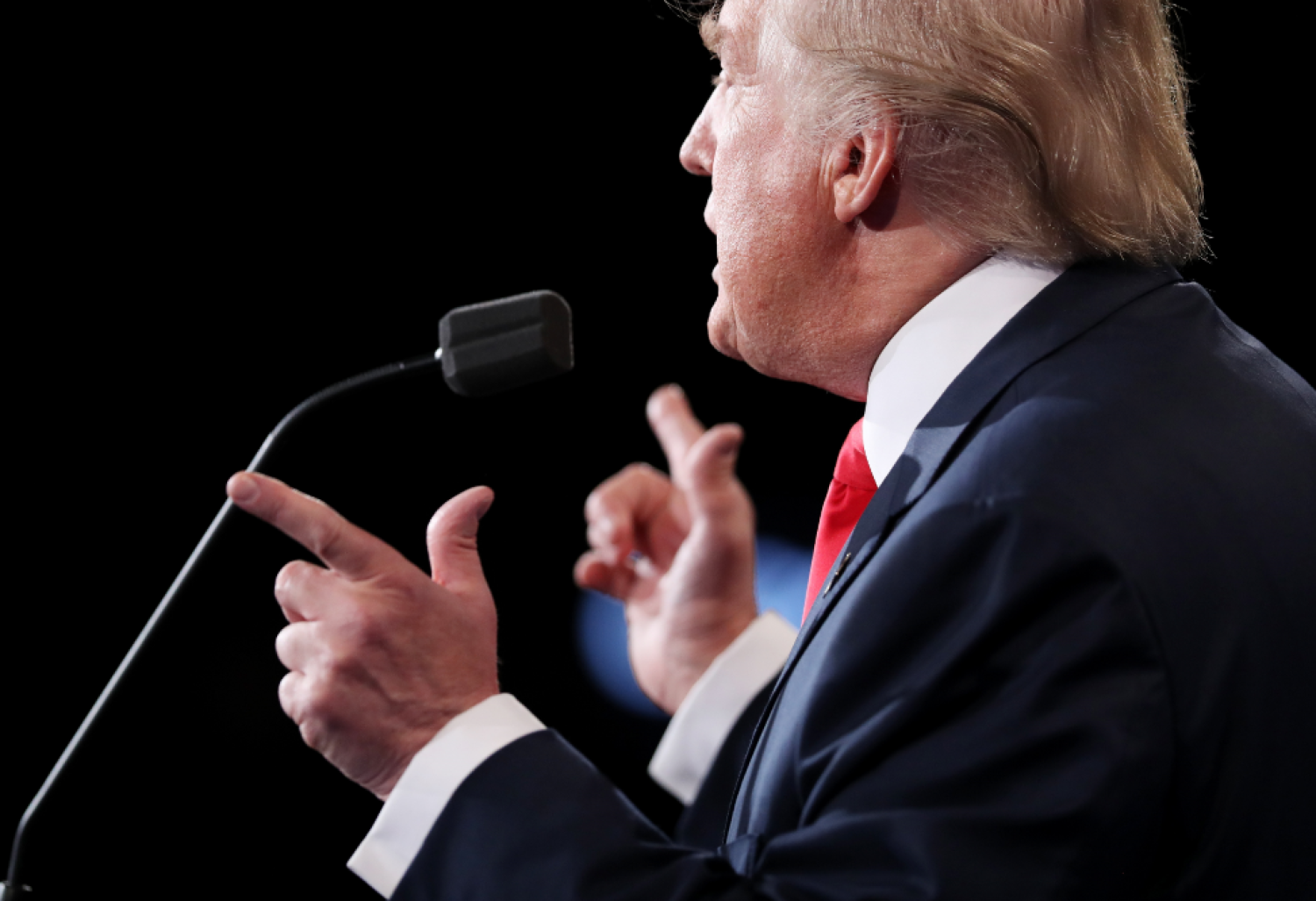 'I will look at it at the time' is bound to be the lasting line from the third and final debate of the 2016 US presidential campaign, and it's a worrying one. Donald Trump's refusal to confirm that he will accept the results of the election on 8 November, in keeping with his accusations of a rigged process, will have many concerned about how his supporters will react to what still seems a likely defeat.

In light of Trump's claims, there has been widespread media promotion of the fact that cases of voter fraud in the US are extremely rare, and that its decentralised electoral system makes it virtually impossible to coordinate such a campaign on a national level. It has also been commonly pointed out that Republicans have long engaged in widespread suppression of votes from minorities and gerrymandering efforts that put a fairly heavy thumb on the scale ahead of election day.

Yet these facts didn't stop Trump from claiming at the debate that there were now 'millions of people' registered to vote who shouldn't be, and placing this in a broader context of a corrupt media lined up against him (compounded by the failure of authorities to charge his opponent Hillary Clinton over her email scandal).

Other Republicans seemed still not to have come to grips with Trump's worldview in the lead-up to the Las Vegas debate, with even his vice presidential candidate Mike Pence saying his running mate would 'absolutely accept' the election results. Trump's campaign manager Kellyanne Conway echoed these sentiments, as did his daughter Ivanka. Despite obvious, recorded and widely disseminated testimony to the contrary, they'll likely continue doing so in the remaining campaign weeks. [fold]

Peter Beinert, writing for The Atlantic, is probably right to predict that Trump's refusal to embrace an essential element of legitimate democracies (and to stay more in line with the authoritarian Russian regime of Vladimir Putin, which he again refused to outright condemn) will dominate the news cycle up until election day, with other members of his party forced to either defend or decry it ad nauseum.

I'm not sure it will move the dial much in terms of his polling or the likelihood of victory for either himself or Republicans in congress, however, with any remaining undecided voters surely lacking the decisiveness necessary to seal an envelope or travel to polling locations in a few weeks.

Let's not forget that Trump has already been in similar territory before, and fairly recently: his second debate warning that Clinton 'would be in jail' were he president similarly shunned democratic convention, while a Foreign Policy discussion this week characterised him as nothing less than seditious over invitations for Russia to hack more of Clinton's emails and for 'second amendment people' to do something about his opponent's Supreme Court appointees should she come to occupy the White House.

There is past electoral evidence that Trump's most recent dangerous rhetoric may ultimately be most damaging to his own campaign, with voters who believe they are disenfranchised unlikely to turn up to vote. Yet there may also be a far more concerning reaction to the tone of the final weeks of the campaign. There are reports of many of Trump's more deplorable (to adopt a Clintonism) supporters intending to act as unofficial election observers, intimidating voters who somehow have the look of illegal immigrants, and threatening violent repercussions and even a coup against Clinton should Trump lose. Militias such as the one that holed up in rural Oregon earlier this year are reportedly enjoying a fruitful recruiting period in light of the former secretary of state's ever-narrowing odds.

We can hope that these are empty threats, and that common sense will prevail on election day and those days that follow. The onus will largely be on Trump, and also the 'alt-right' media such as Breitbart that sustains him, to respond in a more responsible manner should he suffer defeat as is expected. This seems a difficult proposition under present circumstances, particularly given the no-longer fanciful suggestions that Trump will exploit his newfound appeal with the establishment of a new television network after any unsuccessful election, which gives him little incentive to make a clean break from the demographic that will likely comprise its audience.

What becomes of the large numbers of supposedly disenfranchised (and definitely angry) voters in Trump's corner in the longer term is also being firmly considered at present. They will certainly cause some major headaches for Paul Ryan and the other 'establishment' Republicans, who, let's not forget, have only really earned that demarcation in the past year and could risk being swept aside by a new breed who recognise the greater political appeal of nationalism and white identity politics, compared with free market economics and religious conservatism.

Trump's accusations of a rigged political process are also intrinsically linked to notions of a rigged economy and, indeed, a rigged 21st century that seems to diminish the power of many people through the rise of globalisation more broadly and the non-white population at home. As other nations continue to challenge US dominance and demographic changes deliver more and more diversity, the temptation to withdraw from the world stage and cling to rapidly shrinking power base becomes, perversely, more appealing. As confused as he often appears, Trump seems to have an intrinsic understanding of this dynamic, though he may not fully appreciate the extent of the dangers of encouraging it.

Denuclarisation has stalled, but Pyongyang is still reaping the rewards by playing off the US and South Korea.
Robert E Kelly 7 Nov 2016 13:11

Trump is a demagogue straight out of Thucydides or Plato’s fears about democracy: unstable, vindictive, lazy, short-tempered, self-aggrandising, and narcissistic.