Trump has absolutely nothing to gain by defending the Kremlin. Russian citizens don’t vote in US elections. 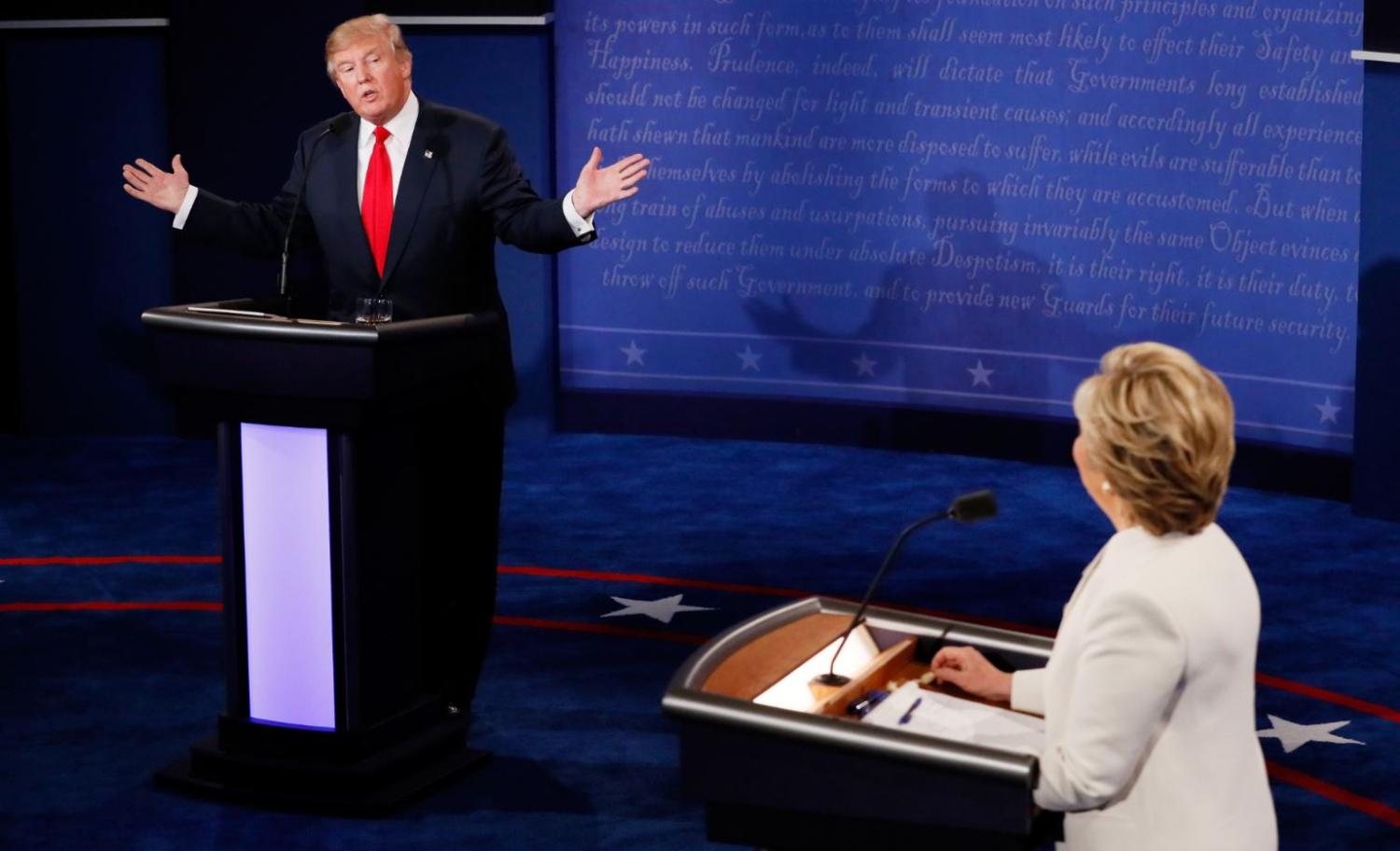 Recent developments in the US Presidential race should put to rest any lingering doubt that one nation’s information warfare capabilities can fundamentally affect the politics of another.

At the third US presidential debate in Las Vegas, Hillary Clinton accused the Russian government of aiding her opponent, both directly and indirectly through cyber-attacks. In response, Donald Trump spent some time seemingly defending Vladimir Putin, talking up Russia’s strength and statecraft while simultaneously talking down the competency of US diplomacy and its intelligence agencies.

Russia, its role in the US election and its links with the presidential candidates therefore took up quite some time in a debate where every second is precious. This prompts several observations; on both Trump and the state of relations between Russia and the West.

First, Trump’s refusal to accept a Russian link to state-sponsored interference in American politics (and it took much prompting for him to eventually give a grudging and generic condemnation of such interference should it have occurred), is almost impossible to understand.

While many of the Republican's presidential nominee's tactical choices defy conventional wisdom on how to maximise voter support, his habit of casting Russia in a positive light – if not an admiring one – now goes beyond what we could reasonably call rational behaviour. It would be much simpler, and politically more advantageous, for Trump to lock in behind Clinton and the US intelligence community on what amounts to repeated violations of American sovereignty. The fact that he still does not do so only invites more speculation about his motives, and his ability to lead should he be elected.

Trump has absolutely nothing to gain by defending the Kremlin. Russian citizens don’t vote in US elections. While there are some on the American far right who admire Putin and wish for a strong man in the White House, they are not numerous enough to tip the balance in Trump’s favour. Ironically, they are the same constituency that Russia has been assiduously courting in order to undermine confidence in American political institutions. At a more structural level, Moscow has been for some time now a bete noir (and sometimes a convenient one) for Western policymakers. Focusing attention on the perceived threat from Russia can be a useful distraction from the more pressing geopolitical competition emerging in the Indo-Pacific strategic space.

More broadly, and perhaps more importantly, the emergence of Russia as a central theme in the US Presidential race reflects the escalatory trajectory in security rivalry between Russia and the broader West. It is also an excellent example of what that rivalry looks like, in an age where traditional kinetic power is now increasingly linked to the power of information and misinformation. [fold]

Of central importance here is not only that technology has developed new tools for governments to affect others, but critically that they naturally favour the offensive. The weight of evidence, from WikiLeaks to the DNC hack, the shutting down of the Ukrainian power grid, Stuxnet, and countless other cyber incursions are testament to this.

On those grounds alone it is of little value, for instance, to try and resolve cyber security threats by linking them to the nuclear deterrence strategies of the Cold War. For one thing, nuclear deterrence rests on a basic assumption of restraint. But hacking, DDOS and hijacking of data occupies a grey area between the digital and the physical. Put simply, it is hard to determine how to respond to cyber-attacks. In kind? With sanctions? With physical force? There are legal, ethical and political costs associated with each option, especially in pluralist societies, not least of which is the often-elusive burden of proof.

As a result, escalation costs from information warfare are much lower than mutually assured destruction: it is the disruption and erosion of political authority and critical infrastructure rather than its wholesale devastation that is at stake.

This is a problem already occupying policymakers in the West, including Australia. It is further complicated because the risks of competition in one arena can easily translate across to another, with more serious implications. For instance, the recent decision by UK banks to close Russia Today’s accounts was another escalation in the tit-for-tat propaganda war. Expressing its public outrage at what it saw as an attack on free speech, Russian attention may well fall on the BBC, as an ‘equivalent’ state-owned media agency. That would limit the ability of Western governments to offer an alternative narrative to a population for whom any dissent against the state-sanctioned line is increasingly dangerous.

That’s worrying because as Russia has shown, information operations and strategic operations can also be mutually reinforcing. Its targeting of rebels in Aleppo by Russian airpower has weakened the enemies of the Assad regime, but it has also wiped out moderates and kept refugees flowing into Europe, some of whom may well be radicalised by the experience. This bolsters the anti-immigration Far Right across the transatlantic space, which in turn puts pressure on free trade agendas, the costs of strategic partnerships, and strengthens the ‘sovereignty first’ argument that Russia has been advocating all along.

And so we come back to Trump. It is little wonder Russia backs him. After all, he is promising to deliver every major strategic objective the Kremlin would like to engender. He will divert the liberal order that has upheld Western power back to protectionism; weaken NATO; and rein the rules-based order back to first principles, based on states’ rights.

Given that, we should not be surprised that another state is taking such an interest in that the affairs of another. But we should be concerned that it has done so with few obvious repercussions, and in a manner that serves to reinforce its broader agenda, rather than as a sideshow with the potential to dilute its overall efforts. Ultimately, it should also serve as a warning to other governments in the West: be prepared.

Russia’s invasion of Ukraine puts Saudi Arabia and the UAE in an awkward spot in relations with the United States.
Rikki Kersten 14 Dec 2016 14:30

A peace treaty with Russia is the holy grail of Japanese diplomacy.
Shane McLeod 21 Apr 2020 11:00

After questions, the past few days have begun to reveal how pandemic has been silently spreading throughout the country.